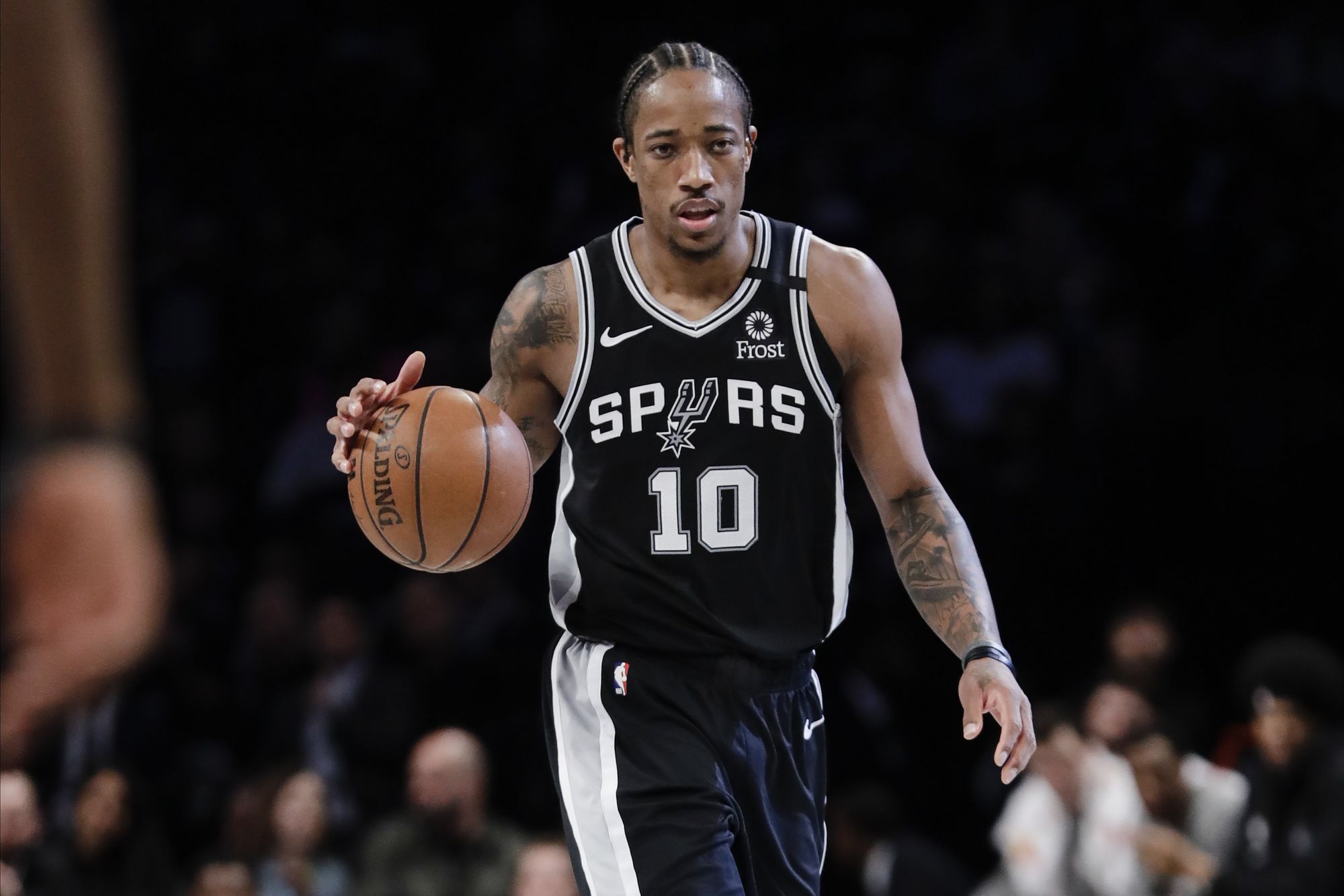 DeRozan shuts down rumors of opting out of Spurs contract

DeMar DeRozan’s entry to the San Antonio Spurs was not something out of a fairy tale book. He was traded by his former team, Toronto Raptors, after another disappointing exit in the playoffs. The Raptors went on to win the championship with superstar forward Kawhi Leonard, while DeRozan and the Spurs exited in the first round of last year’s postseason.

This year, the Spurs are in the brink of failing to make the playoffs since the 1996-97 season. It remains to be seen if and when the current NBA season will resume due to the corona virus widespread, but San Antonio’s 27-36 record has dropped them to the 12th spot in the Western Conference. While this down year is inevitable for the Spurs franchise, we are still not used to having the brilliance of Gregg Popovich and his team in the playoffs.

With all that said, there were reports last week that DeRozan is not seeing eye-to-eye with the Spurs organization. Yahoo Sports’ Chris Haynes’ reported on the possible DeRozan departure when he opts out of his contract next summer and enters unrestricted free agency.

“If swingman DeMar DeRozan and the San Antonio Spurs can’t agree to an extension by the late June deadline, the four-time All-Star intends to decline his $27.7 million player option for next season to become an unrestricted free agent, league sources told Yahoo Sports.

DeRozan, who has averaged 20 points in his 11-year career, would be among the top players on the market this summer.

DeRozan declining his option wouldn’t close the door on him re-signing with the Spurs, sources said, but it would definitely open an avenue for a team like the New York Knicks, who are expected to be interested.

This report from Haynes set off the basketball world buzzing about the potential destinations for the 30-year old scorer. However, DeRozan himself shut down these talks and said that there is no truth to it, as per Jeff McDonald of mysanantonio.com.

Asked about the report after the game, a smiling DeRozan played coy.

“Who reported it? Did my Mama say it?," DeRozan said. "Don’t listen to it then.”

Even though team success has been hard to find for the Spurs this season, DeRozan is still putting up All-Star caliber numbers. He is norming all-around averages of 22.2 points, 5.6 rebounds and 5.6 assists, while hitting a stellar 53% overall clip from the field. The four-time All-Star has grown into an excellent playmaker under Popovich’s wing. He put up a career-high 6.2 assists last season, while his current assists output is the second-best of his career.

Of course, Haynes’ report does not come out as a shocker. It was never DeRozan’s decision to play for the Spurs, even hinting his anger towards the Raptors front office for trading him away. DeRozan also emphasized how frustrating the Spurs’ current losing record is, as per Tom Osborn of the San Antonio Express-News.

Nobody in this locker room enjoys losing. We go out there and fight. When the outcome is a loss, it's tough, especially with the amount of games we have left and the opportunity to try to make a playoff push. Every single game is critical."

With 19 games left on their schedule, the Spurs still have plenty of time to catch up. They recently had a morale-boosting victory over Luka Doncic and the Dallas Mavericks, but there’s still a lot of ground to cover for the Spurs. Should the league decide to continue the current schedule when the games resume, San Antonio will be preparing for all-important match-ups against the 8th-seeded Memphis Grizzlies and the 10th-ranked New Orleans Pelicans. They are four games behind the Grizzlies for the last playoff spot in the West.

It has been a roller-coaster season for Washington Wizards star shooting guard Bradley Beal. There have been lots of highs and lows, but it is of absolute certainty that Beal has become a Top 20 player in the league. Beal has been consistently good all season long, but his post All-Star break performance has been phenomenal. He eclipsed the 50-point mark on two consecutive games. What’s even more impressive in that feat is that the games were on a back-to-back schedule with the second night coming against the league-leading Milwaukee Bucks and their vaunted defense.

Beal is averaging a whopping 36.5 points per game after the All-Star break. That is a performance worthy of an All-NBA team conversation, yet coaches around the league did not think that Beal isn’t good enough to be selected to the All-Star game. Is this becoming a statement for Beal? The numbers certainly show that it is.

When he got wind of the fact that he was left off from the All-Star game, Beal said that it was “disrespectful.” Wizards head coach Scott Brooks definitely agrees with it, as per ESPN’s Nick Friedell.

"He's been pretty good ever since I've been here, four years now he's gotten better. We all know [what happened]. Unfortunately, he didn't get it, but the players voted him second, that says a lot. The coaches, we think we know it all, we think we see it all, but the players know it. They know: He's impossible to guard. He's one of the elite [scorers]. Right now, there's James [Harden]. He's the only one scoring more points than him. He's really efficient. ... Can you imagine if he was an All Star what he'd be doing right now?"

It has been a scintillating career-best season for Beal, whose names propped up as one of the most tradable players before the regular season began. With his star backcourt partner John Wall still on the injury recovery process, there were talks that the Wizards need to rebuild and they could start that by shipping Beal and receiving younger assets and valuable draft picks in return.

Yet, Beal never left and his commitment to bringing the Wizards to prominence remains the same as it did in his first year in Washington. In a heartfelt sit-down with Marc Spears of The Undefeated, Beal penned his true loyalty to the Wizards fans.

“Wanting to have my jersey retired in Washington one day played a factor in me re- signing. Every night we walk into that arena, there’s five names up there. Those are some of the five greatest to ever touch a basketball. To be on pace to breaking the records that I am now and to be here for eight years already, that’s special. And coming into the prime of my career, you don’t know how much longer you have.

For me, I look at Kobe, I look at D-Wade [Dwyane Wade], I look at Dirk [Nowitzki], U.D. [Udonis Haslem], how they can stay in one situation for a long time.

I hate change. If it happens, it happens. But if I can control it, I will finish in D.C.”

As speculations circulated about his possible departure from Washington, the 26-year old star stunned the basketball world when he re-signed for a multi-year deal with the Wizards. It was a move criticized by lots of people, but particularly loved by the D.C. fans. But as for Beal and the team, it has not paid dividends just yet. While it is expected that the Wizards would not come close to being an elite contender in the Eastern Conference, Beal’s individual brilliance has not towed the team to much-needed wins. Although they have positioned themselves at the 9th spot in the standings, they are still 5.5 games behind the Orlando Magic for the last playoff spot in the conference.

Moreover, you would think that the two straight 50-point performances from Beal would result to wins, right? Wrong. The Wizards lost both of those games, firing up more heat on the team’s failure to surround Beal with a strong supporting cast. Beal emphasized that he does not care about his individual stats as much as he cares about racking up the Ws in the standings.

"Honestly, I could care less about how I'm playing as long as we're winning. Because my career highs and those good games, what is the record? We're 1-9 when I score 40 or something. That's terrible. I'm not happy about that. I'm not going to sit here and be like, 'Oh yeah, but I scored 40.' No, we got to win, and that's what I'm about."

Of course, Beal can always reiterate his loyalty to the franchise from time to time but that has to be a two-way street for both parties. Everyone eventually reaches a boiling point, and the Wizards front office should have a more heightened sense of urgency in building a team fit for contention in the East. The Wizards have a fully-fledged superstar in Beal, but the time is already running out for them.