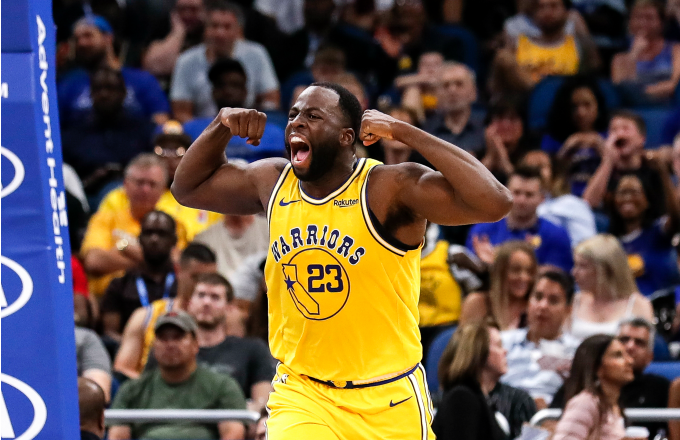 The Golden State Warriors aren’t taking the risk of losing another All-Star next year. Multi-titled defensive ace Draymond Green and the Warriors have agreed to a four-year contract extension this summer, preventing the 29-year old forward to enter free agency next offseason. ESPN’s Adrian Wojnarowski was the first to report this exciting development for Bay Area fans.

Interestingly, Green will be the lowest-paid among the Warriors’ four All-Stars that include Stephen Curry, Klay Thompson and recently-acquired point guard D’Angelo Russell. Green, one of the most skilled combo bigs we have in the league today, posted an all-around stat line of 7.4 points, 7.3 rebounds, 6.9 assists, 1.4 steals and 1.1 blocks per contest for the Warriors last season. Although it was the least productive regular season he had since 2014, Green upped his numbers to 13.3 points, 10.1 boards and 8.5 assists per game during the playoffs when the Warriors had a number of key casualties due to injuries.

It’s also worthy to note that Green actually left a lot of money on the table with this extension. As per Kevin O’Connor of The Ringer, the point forward could have re-signed with the Warriors for a five-year, $204 million deal next offseason, or even a four-year, $151 million contract with another team. Of course, it’s not an assurance that the Warriors will give Green that enormous contract especially if he gets injured down the road and the fact that he will already be 30 years old in 2020.

Warriors general manager Bob Myers chimed in his thoughts on the franchise successfully extending Green’s contract, per the team’s official page on NBA.com.

“We’re thrilled to retain Draymond long-term as we move forward and into Chase  Center. He’s played an enormous part in shaping our organization over the last seven years. His passion and knowledge for the game are indispensable to our team. As a multi-time NBA Champion he’s surpassed everyone’s expectations—except his own.”

Many people have said that with Kevin Durant, Andre Iguodala and Shaun Livingston leaving the team, the Warriors’ dynasty could be over. However, this Green extension will bode really well for the continuity of the team, something that is overlooked in a success of a franchise. As for Green, it’s also very interesting that he still has a lot of room to grow. Even though he is a career 32% shooter from beyond the arc, Green actually can shoot the three, evidenced by a number of games when he hit multiple shots from deep. He just need to work on his consistency. Also sometimes, all it needs for a struggling shooter is to be given the green light to shoot, boosting his confidence.

Warriors assistant general manager Kirk Lacob also relayed to Nick Friedell of the ESPN that Draymond has been very vocal at the fact that the Warriors franchise has shaped his career and how he has improved over the years.

"I had a conversation with Draymond about this right after our season. He said, 'I   would not be the player I was today if I had come onto this Warriors team three years ago.

He's like, 'When I got here, we were a completely different team. I was given a chance, and I failed a lot.' And he's like, 'I sucked my first year. My second year I was OK. My third year I got an opportunity.'"

Indeed, the stocky, 6-foot-7 Green was just a shade of the superstar he is now back in his rookie year. Although the Warriors organization has played an important role in giving the Michigan product the platform to shine, Green’s unselfishness and willingness to work on his body have been the cornerstones of his drastic growth.

Melo itching to get back and prove he can still play

The 35-year old Carmelo Anthony is not giving up hopes of returning to the NBA. The 10-time All-Star sat down with Stephen A. Smith of the ESPN’s First Take to talk about his potential return, and his frustrations on being overlooked by teams.

Like many superstars in the past, it was speculated that Anthony had difficulties accepting a role off the bench. He only appeared in 10 games for the Houston Rockets last season, before he and the team agreed to part ways. Reports have it that Anthony had some issues regarding the Rockets’ offensive sets, but it ultimately boiled down to the fact that he was not willing to accept a lesser role.

Anthony also points out that question why he can’t be included in any 15-man roster in the league. While there are a lot of talent in the NBA nowadays, the veteran forward hinted that the reason why teams are passing off on him is that there are times that basketball is becoming more of “politics.”

Anthony also emphasized that he and his people are active in gauging his market in the league.

“We’re reaching out, we’re talking, there’s dialogue with certain teams. I don’t want to get into specifics, but there’s conversations. But I think for me now, it’s just a matter of me letting people know where I’m at. Mentally, physically, emotionally, and this is where I’m at: I want to play basketball.”

While this recent appearance on national television will definitely garner headlines, it still remains to be seen if the combination of Carmelo’s credentials and desire to play will earn him another shot at donning an NBA jersey.

Bradley says relationship with Rondo made his Lakers decision easy

Arguably one of the most underrated free agency signings this summer, Avery Bradley has joined the Los Angeles Lakers to have another opportunity to compete for a championship. Bradley says that his relationship with Lakers point guard Rajon Rondo is what tipped the scales for him to sign with the team, per an interview with the Lakers Nation. Bradley and Rondo were former teammates during their stint with the Boston Celtics.

“[O]ur relationship is good on and off the floor. I feel like without him even knowing it, he is part of the reason why I came here. He’s a great person and [a] great basketball player.”

Bradley, who was traded from the Clippers to the Memphis Grizzlies mid-way through last season, is coming off season averages of 9.9 points, 2.8 rebounds and 2.4 assists per contest. He played 14 games for the Grizzlies, where had the chance to prove that he is still a capable scorer as evident by his scoring average of 16.1 per game.

But scoring is not what the Lakers need of him this season. Bradley is mostly known for being a defensive ace with the Celtics, and his willingness to exert tremendous defensive pressure on the opposing team’s point guard. The 6-foot-2 combo guard is also a career 36% shooter from three-point territory, an important skill for a guard to have while playing for a LeBron James-led squad.

The Lakers already have a bunch of offensive stars at their helm in LeBron, Anthony Davis, Kyle Kuzma and DeMarcus Cousins. With their pursuit of Andre Iguodala still in the balance, Bradley should be tasked with the main role of the defensive specialist for the star-studded team.