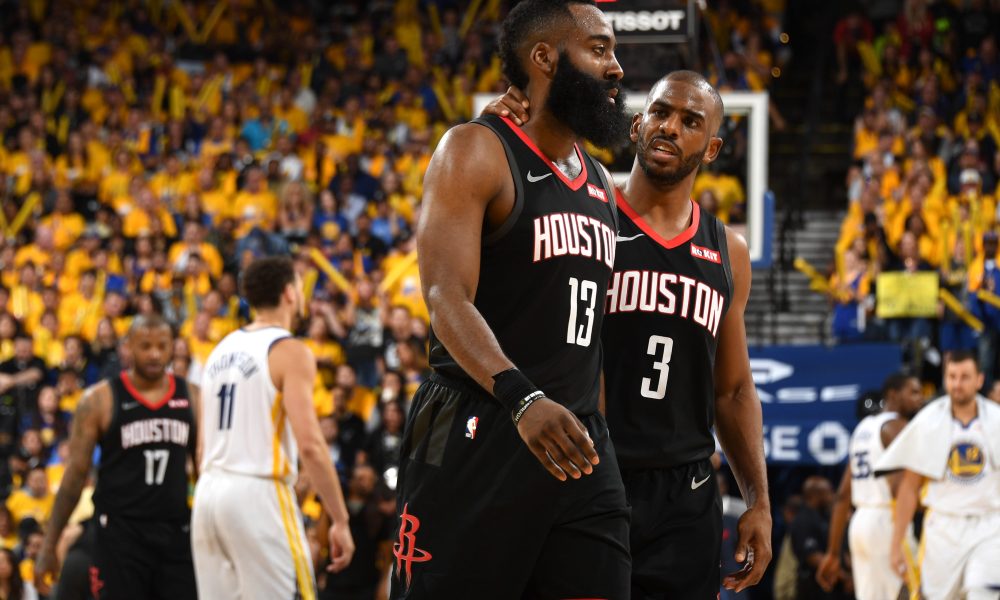 After rumors surfaced regarding a growing on-court rift between James Harden and Chris Paul, the Houston Rockets had no choice but to let go of one of them. Of course, the 34-year old Paul is the more expendable choice given his age and declining performance. The Rockets front office even got to the point of publicly saying that they are ready to trade everyone on the roster, with the exception of Harden. Soon after, Paul found himself on his way to Oklahoma City after the Thunder agreed to ship flamboyant do-it-all point guard Russell Westbrook to Houston.

In an exclusive interview with Sam Amick of The Athletic, Rockets general manager Daryl Morey revealed that Harden asked the team if it’s possible to acquire Westbrook without giving up Paul.

“He was curious if there was a way to do it where we could keep everyone and not have to give up anything [laughs]. Unfortunately, the math of the deal required Chris going out.

His mind is always [going] first to ‘How [can we be] completely stacked?’ So I had to sort of explain. He gets it roughly, but obviously he leaves the details to us. Besides the high level [talks] where he thought that Russ would be a great fit here, there’s not a ton of interaction after that point.”

With their salary book already full after giving lucrative extensions to young budding center Clint Capela and veteran scoring guard Eric Gordon, there was no way that they could get Russ without giving up Paul. Letting go of the quickly-improving Capela is a great risk for the organization, while shipping Paul also means dumping his massive salary. Besides, how would a trio of Harden, Westbrook and Paul fare? We can’t forget that the game only allows one ball on the court.

Paul’s situation with the Thunder is a bit tricky. After trading their two superstars in Westbrook and Paul George, there’s a hint that the organization might be thinking of rebuilding their team. They received a young incredible point guard in Shai Gilgeous-Alexander as part of the George deal, someone they can build their future around. Of course, the Thunder can make full use of Paul to mentor SGA. But the team doesn’t have enough pieces to make noise in the playoffs and Paul’s championship window might be closing now.

Yet, Paul has been excited of being a part of the Thunder organization right from Day 1, per Erik Horne of The Oklahoman.

While there are speculations that the Thunder are still bent on finding a trade partner for Paul, the team is being patient on gauging his value. Through seven games this season, CP3 is averaging a decent stat line of 15.6 points, 3.4 rebounds, 4.7 assists and 1.7 steals per contest. Among the rumoured possible destinations for the future Hall of Famer point guard are the Miami Heat, the Milwaukee Bucks and the Minnesota Timberwolves.

Danny Green claims he was “close” to choosing Dallas

Coming off a successful championship run with the Toronto Raptors, sweet-shooting swingman Danny Green had plenty of teams pursuing him in free agency. A battle-tested long-range gunner with the ability to be an anchor on the defensive end, it wasn’t surprising that Green gained a lot of attention during the summer. In the end, he was able to narrow down those choices into two teams: the Los Angeles Lakers and the Dallas Mavericks.

We knew that he ended up choosing LeBron James and the Lakers as it’s really difficult to pass up on an opportunity to play with The King. However, Green reiterates during an episode of ESPN’s “Now or Never” that he was very close to joining the Mavericks.

“I think for everybody free agency is kind of similar. You’re not watching really everybody else, but you’re seeing what other guys are doing, you’re seeing what teams are making moves. Luckily I was in a great position in which I was able to choose teams I wanna talk to. It was fun, but at the same time it was frustrating, it was a lot of emotions, stressful, nervous, anxious.

It was between L.A. and Dallas and Mark Cuban made a really good pitch, and he made it tough. So I’ve done with my decision, I did call them, and it was tough and I did feel kind of bad.”

Cuban and the Mavericks organization have been known for how great they treat their players. They showed loyalty when they opted to reward a veteran Dirk Nowitzki with a lucrative extension instead of just offering him a bargain deal for his declining performance. Cuban doesn’t hesitate on spending much money to establish a contending team, and he certainly believed that Green will help them. Green could have fit in perfectly alongside the excellent star duo of Luka Doncic and Kristaps Porzingis.

Still, there’s no doubt that the Lakers are also a great fit for Green. They are now off to a stellar 6-1 start to the season, and there is an excellent chance that Green would capture his third championship ring this year.

Hawks wanted to pursue Sabonis in 2020

The Atlanta Hawks are gaining traction in their rebuilding process. They have the amazing sophomore point guard Trae Young as the centrepiece of their future. Combo big man John Collins might have suffered a setback following his 25-game suspension, but he is quickly adding more weapons to his growing offensive arsenal. They have also added good two-way rookies De’Andre Hunter and Cameron Reddish in this year’s draft. There is a sense that the Hawks can really contend for a playoff spot this year, and getting another star player could complete their rebuild.

With that said, a report from The Athletic’s Shams Charania says that the Hawks front office were planning to pursue Indiana Pacers center Domantas Sabonis and Boston Celtics swingman Jaylen Brown in 2020. However, both players have signed extensions with their respective teams, pulling them out of next year’s restricted free agency.

“Before Pacers forward Domantas Sabonis and Celtics forward Jaylen Brown reached contract extension agreements, the Hawks were believed to be interested in either player as a restricted free agent, sources said. Atlanta is one of four teams (Charlotte, Cleveland, Memphis) projected to have significant salary-cap space in the 2020 free agency period.”

The inside-outside game of Sabonis could have complemented Trae’s tremendous playmaking ability. In the frontcourt, Collins would not have any problems playing alongside Sabonis. Collins is more of an outside threat and he would not impede with Sabonis’ low post play.

Through five games this season, Sabonis is already averaging a double-double stat line of 21.8 points and 11.4 rebounds per contest. There were rumors that the Pacers wanted to gauge his trade value in the market, although team general manager Chad Buchanan shut those talks down, as per the NBA.com.

"It takes a little time to work through it. We have a great relationship with Domas' agent, so there was a lot of good will from the very beginning. You have ups and downs throughout the negotiations and some of it comes out publicly and some of it doesn't.

It was never our intention to trade Domas. That was an absolute last resort. I know that came out as a possibility but that was never even a remote possibility for us."

As of right now, it’s safe to say that the Pacers will be holding on to Sabonis in the years to come. As for the Hawks, they will rely more on the development of Young and Collins. The 2020 free agency class is very shallow, although they could try to nab Detroit Pistons center Andre Drummond if they are interested in his nightly double-double services.