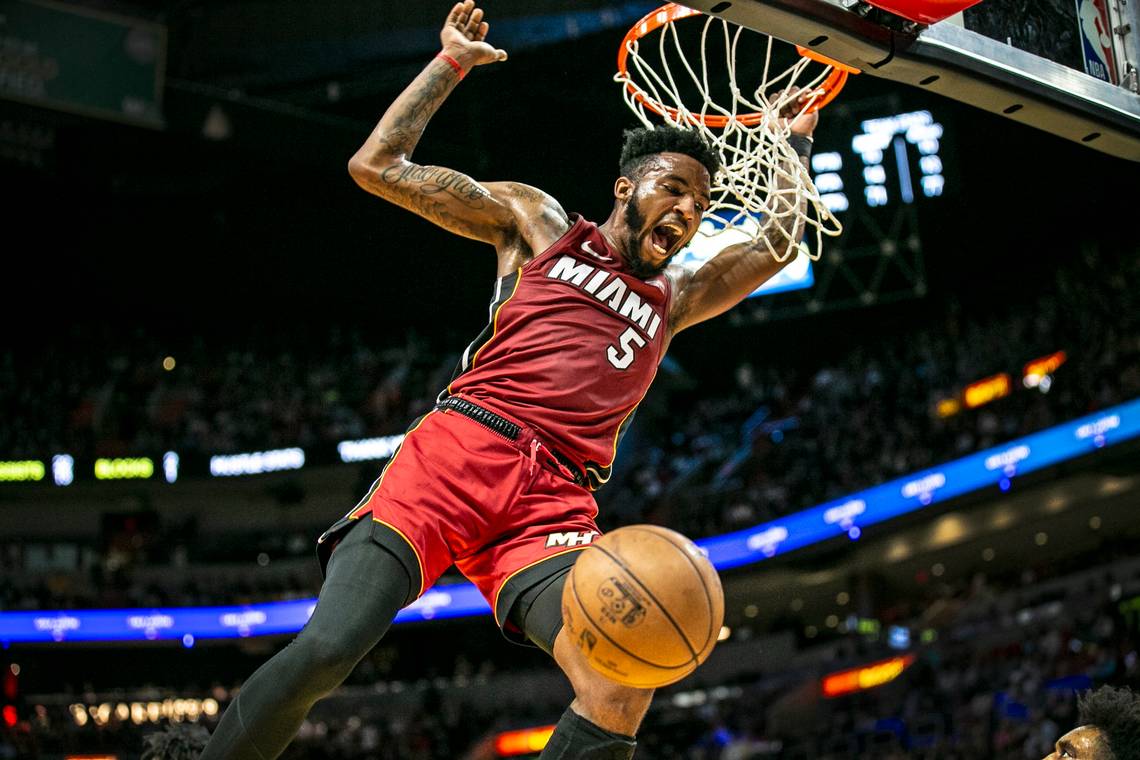 One of the underrated quality role players entering free agency this offseason is the high-flying Derrick Jones Jr. At 24 years old, the lefty forward is entering the prime years of his career and his overall versatility makes him one of the best under the radar targets for teams in the free agency market.

While logging in 24.5 minutes per game for the Heat this season, Jones is contributing all-around numbers of 8.9 points, 4.2 rebounds, 1.1 assists and 1.1 steals. His shooting efficiency is also on an all-time high. He is producing a stellar 67% clip from his two-point shots, and he is putting up a career-best 78% from the free throw line.

Even if it’s true that he is yet to bring a consistent three-point shot to the table, Jones is a very dependable finisher around the rim. John Hollinger of The Athletic detailed out how effective and versatile Jones is on both offense and defense.

“A 24-year-old hybrid forward coming into his prime years, this guy is much more than just a dunker. Most notably, “Derrick Zones” is a freak at the top of Miami’s 2-3 with his length and mobility, but he also offers surprise rim protection (2.9 percent block rate, the league’s second-best among perimeter players) from a non-center.

As with Carter-Williams above, Jones has shooting questions that may make his market more tepid than otherwise. He only shot 27.0 percent on 3s and is at 27.6 percent for his career. But that’s okay when you shoot 67.0 percent on 2s. Read that number again – 67 percent! From a 6-6 forward! Jones is very effective finishing plays from the dunker spot or off cuts to the rim, and he’s a whirlwind in transition.”

The 6-foot-7 swingman is a versatile Swiss Knife who can play both forward positions. He can defend the point guard up to the power forward position, and his quick reflexes and length help him play the passing lanes. In a time when big-name stars are not on the FA market, teams this summer could come looking for multi-faceted role players like Jones.

If the Heat front office decides it best to let Jones walk in free agency, there’s still a multitude of teams interested in Jones’ services. Jones’ shooting form is not broken, so there’s still hope that he could potentially improve his percentages from beyond the arc. Chris Fedor of Cleveland.com wrote that the Cavaliers could look into mid-level players like Jones this offseason.

“The mid-level will be a competitive market, as numerous opponents, including playoff squads, will be able to make similar offers. The Cavs have never been a preferred free-agency destination anyway. And they won’t have a monetary edge. Because of that, they need to set their sights much lower, on lesser-known commodities with upside and a more favorable price tag.

While it is true that Jones is not a franchise-changing player, he is one of those important glue guys who will bring in the intangibles and the winning attitude each time he steps on the basketball court.

It will surely be another year of rebuilding for the New York Knicks next season, but there’s growing optimism that they are headed towards the right direction this time around. They may be facing another down year in terms of win-loss record, but they now have the young guns to build around and the front office personnel who can lead them to greater heights.

SNY’s Ian Begley reported that the Knicks management is bent on placing rookie RJ Barrett as their centrepiece moving forward. The lefty scorer has the talents to go with his alpha male attitude, and he is used to playing under pressure. Having said that, Begley also emphasized that New York will gauge the free agency market for quality players to complement Barrett’s skill set.

“If the Knicks decide to look for a forward via free agency who can shoot, Danilo Gallinari, Carmelo Anthony and Christian Wood are potential options. Some members of the Knicks front office were enamored with Wood over the course of the   season.

Regarding Anthony, prior to free agency last summer, the Knicks strongly considered signing the ex-Knick if they were able to land two other stars. They missed out on the stars in free agency, which took Anthony out of their plans. Rose, the current team president, was Anthony's agent. The two remain close. Worth pointing out: the Knicks being open to looking for a big who can shoot doesn't necessarily reflect a desire to move on from Randle."

Aside from the free agency market, the Knicks can also nab a Top 5 selection in this year’s draft should they get a bit lucky in the lottery. Reports also have it that the Knicks will try to engage in trade deals to move up in the draft. They say that they are targeting LaMelo Ball, New Orleans Pelicans’ Lonzo Ball’s younger brother. LaMelo is pegged to be the best playmaker in his class, and the Knicks would want him to create a partnership with Barrett.