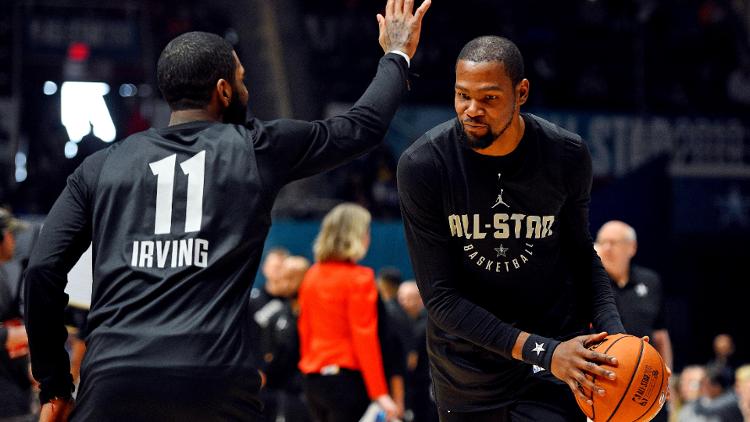 The devastating Achilles injury that star forward Kevin Durant sustained in Game 5 of the NBA Finals leads us to a number of “what-ifs.” First, a healthy Durant could have been enough for the Golden State Warriors to come up with the crucial Game 6 win and possibly beat Kawhi Leonard and the Raptors in Game 7 at Toronto. While another coveted championship ring to add to his collection won’t necessarily convince Durant to stay in the Bay Area to continue the Warriors dynasty, it could have been one of the major factors that would have tilted KD’s decision to don the blue-and-gold threads again next season.

But Durant got injured, and it’s highly-expected that the two-time Finals MVP will miss the entire 2019-20 season. Durant would then bolt out the Golden State’s gates and joined All-Star point guard Kyrie Irving to play for the Brooklyn Nets. During the ESPN’s show Jalen & Jacoby, NBA former player and now analyst Jalen Rose points out that if not for the Achilles injury, Durant would have influenced Irving to come with him to the Big Apple and play for the Knicks.

You clearly see who won out because one guy is going to be playing this year, another     guy has to come back from injury. You need somebody to hold it down while you’re  not out there, they’re the best of friends, so it makes sense for them to pair up. That’s what ended up making it be for the Nets instead of the Knicks.”

Throughout last season, the Knicks were predicted to be the heavy favorites to nab Durant. KD got into a heated situation with Warriors do-it-all star Draymond Green during their widely-reported conflict in the early part of last season. There were also speculations that Durant never felt that his efforts during the Warriors’ successful two-year title run were appreciated by the Bay Area fans as much as they have poured their adorations on Stephen Curry. As emphasized by many reporters, Durant wanted to build up his legacy by becoming the main man of a championship franchise, something that he could not do in Golden State unless Curry suddenly wants to play for another team.

But it’s also important to point out that it’s not only the injury that influenced Durant to go to Brooklyn. Marc Berman of the New York Post reported that a league source told him that the Nets’ winning culture heightened the interest of both Kyrie and KD to play for them.

“Those two wanted to be a partnership and the Knicks were told they may come at some point. But upon reflection they saw Brooklyn evolve into decency while the Knicks continued meandering. [Coach] Kenny Atkinson is a developmental guy learning as he goes, he’s just ordinary at best with X’s and O’s. So the Knicks had an early lead. But they had a moment of clarity. The Nets were further along and still was the New York market.”

True enough, the Nets have completely moved on from their part on one of the worst trade deals in NBA history when they traded a whole bunch of first-round picks for an aging trio of Kevin Garnett, Paul Pierce and Jason Terry. Even without a single big name superstar on the roster, they overachieved by a mile when they made it to the playoffs last season. Atkinson has been very adept in making the most of the roster presented to him, and could even be credited to how young budding star D’Angelo Russell has blossomed into a great leader and efficient player.

Even without Durant next season, the Nets should still have a great shot at landing in the playoffs. A reinvigorated and well-rested Kyrie will have one of his most productive seasons, while the supporting cast of Caris LeVert, Spencer Dinwiddie, Joe Harris, Jarrett Allen and DeAndre Jordan should be enough to give Brooklyn of about 43 to 48 regular season wins, enough to be a playoff team in the Eastern Conference.

With the Cleveland Cavaliers officially waiving veteran gunner JR Smith, a number of contending teams are reportedly interested in acquiring the services of the 2016 NBA champ. Among those interested teams are the Eastern Conference runner-ups, Milwaukee Bucks. The Athletic’s Shams Charania was the first to report on the scheduled meeting between Smith and the Bucks front office.

“JR Smith will have a free-agent meeting with the Bucks today in Milwaukee,  league  sources tell @TheAthleticNBA @Stadium. Bucks are searching for a wing shooter and both sides will have opportunity to sit down.”

Smith, 33, put up 6.7 points in 11 appearances for the Cavaliers last season. His season was cut short after both him and the Cavaliers organization agreed that he step away from the team as they were working out a trade that would prove to be for the betterment of both parties. However, nothing concrete materialized in trade talks last season. The Cavaliers were hoping that a contending team will be interested in acquiring Smith this summer but reports have it that Cleveland found no takers for the shooting guard.

With their outstanding combo guard Malcolm Brogdon leaving the team to sign with the Indiana Pacers, the Bucks are currently short of a natural shooting guard on their roster. All-Star Khris Middleton and sharpshooter Pat Connaughton are more comfortable playing the forward positions, while sophomore guard Donte DiVincenczo is still learning the ropes of playing in the league. They recently acquired Wesley Matthews in free agency, but signing another shooting guard will give them depth and cushion at the said position in case of injuries.

Bender heads back to Europe to join CSKA Moscow

After a disappointing three-year stint with the Phoenix Suns, 21-year old stretch forward Dragan Bender is reportedly leaving the NBA to play for CSKA Moscow in the EuroLeague. Eurohoops.net’s Nikos Varlas wrote about this recent development.

“Former no4 draft pick Dragan Bender has a verbal commitment for a multiyear deal with EuroLeague champions CSKA Moscow and will take it unless there’s an interesting NBA offer for him in the 11th hour, according to Eurohoops sources.”

While this could be a great move for the young Croatian big man to continue developing his potential, it is actually reported that a couple of NBA teams were interested in signing him for next season, per Sportando’s Orazio Francesco Cauchi.

“As Dragan Bender continues to explore the NBA market, Cleveland and Toronto are among the teams that have inquired, I've been told, European market remains an option for the Croatian forward. CSKA Moscow and Fenerbache are looking at his situation with some level of interest.”

A fourth overall pick during the 2016 NBA Draft, Bender never lived up to the high expectations placed on him. He averaged a lowly stat line of 5.3 points and 3.8 rebounds per game in his three years with the Suns, and was a defensive liability on the floor. Bender was projected as the next stretch forward who could be a potential star, but the Croatian actually struggled from the perimeter. Last season, he only racked up a very low 22% clip from beyond the arc.