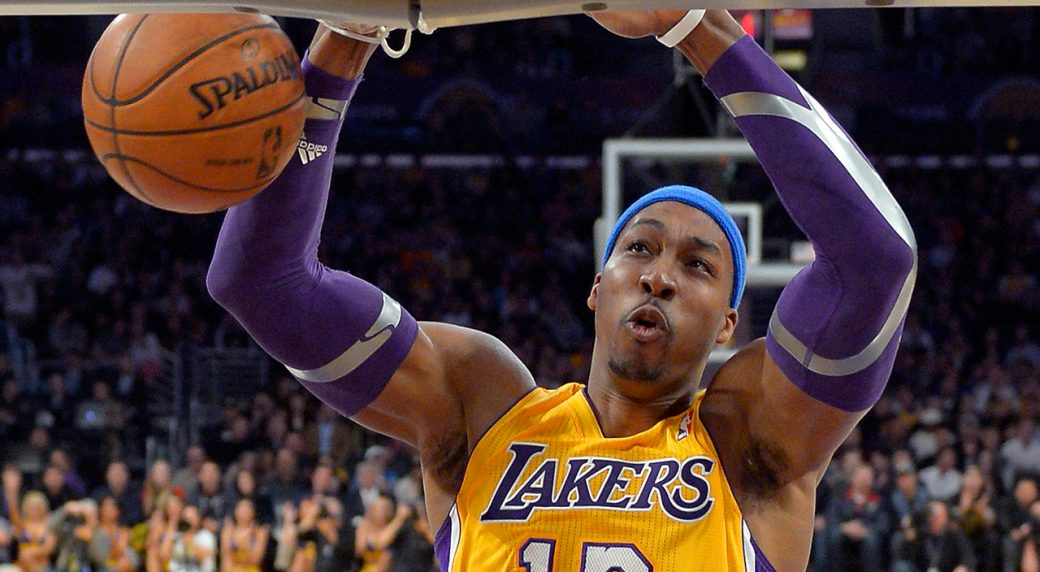 With DeMarcus Cousins sustaining a devastating ACL injury that will keep him out of the upcoming season, the Los Angeles Lakers have been in full search for an effective big man to round up the team’s frontcourt line-up of Anthony Davis and JaVale McGee. There were speculations that defensive stalwart Joakim Noah was a candidate, but in the end, the Lakers zeroed in on former Defensive Player of the Year winner Dwight Howard. Howard played for the Lakers during a prime year of his career in 2012, but failed to provide a winning presence for that squad that also included Kobe Bryant, Pau Gasol and Steve Nash.

ESPN’s Adrian Wojnarowksi has the inside scoop on the intriguing Howard-Lakers reunion.

“After completing a contract buyout with the Memphis Grizzlies, Dwight Howard will sign a non-guaranteed contract with the Los Angeles Lakers that comes with a clear message, league sources told ESPN: Disrupt this team -- and you'll be gone.

In meetings with Lakers management, coaches and teammates -- including Anthony Davis -- late this week, Howard sold himself as an eight-time All-Star who had hit "rock bottom," in the words of one team source, and promised that he'd humbly accept a lesser role of rebounding and blocking shots for the Lakers.”

Howard’s contract with the Lakers is non-guaranteed, granting the team a safety net should the veteran big man make matters worse for the Lakers’ locker room and team performance. He was bought out by the Grizzlies before the Lakers move, costing him $2.6 million of his $5.6 million guaranteed salary. But in the event that the Lakers retain him beyond the January 7 deadline, the $2.6 million will be given back to Howard. To give a more exact detail of the contract, ESPN’s Bobby Marks tweeted out this important summary.

“The contract that Dwight Howard will sign in LAL is called a “summer contract”  because it has $0 salary protection (comparable to Anthony Bennett in Houston). Howard will earn $14,490 for every day he is on the roster. The per day clock will start on Oct. 21.”

Howard, 33, is a three-time winner of the Defensive Player of the Year award and an eight-time All-Star. Despite the drastic decline from his All-Star years, Howard is still a walking double-double machine every night. He averaged 16.6 points, 12.5 rebounds and 1.6 blocks per game for the Charlotte Hornets during the 2017-18 season. However, his momentum was cut short when he sustained a back injury that needed a season-ending surgery last year when he played for the Washington Wizards.

Shams Charania of The Athletic also reports that it was Lakers new assistant coach Jason Kidd who first spoke with Howard about the possibility of him playing for the Lakers again.

“Howard believes he can contribute at a high level for any NBA team, but the eight- time All-Star also understands he has to focus on rebounding, defense, blocking shots, finishing around the rim and simply playing whenever he is asked. He has accepted it — as much as those in the basketball community have doubted his words.

Kidd became convinced about Howard’s newfound awakening. Next up, the Lakers   needed to get on the same page with all of the stakeholders within the franchise —  from LeBron James and Anthony Davis to Pelinka and head coach Frank Vogel — and bring Howard and other free-agent possibilities to Los Angeles for meetings.”

Of course, it will be really hard to foresee if Howard could indeed turn things around for himself in the Lakers’ purple-and-gold threads. The polarizing big man has said these words over and over again, but we are still yet to witness a consistent maturity from him on and off the court.

It will also be interesting to see how Lakers new head coach Frank Vogel will insert Howard to the rotation. Davis has reiterated that he wants to go back to his natural position of power forward, so the starting center slot will be up for grabs for Howard and McGee. McGee is coming off a career year that saw him put up an impressive stat line of 12.0 points, 7.5 boards and 2.0 blocks per contest. His rim-protection ability and shooting touch around the rim should bode well for his campaign to start for the team.

Lin agrees to play for the Beijing Ducks

Jeremy Lin has found a new home. ESPN’s Kevin Wang reports that Lin has agreed to a deal with the CBA’s Beijing Shougang Ducks, a couple of months after he won his first NBA championship with the Toronto Raptors. Lin took to Instagram his appreciation post of the NBA and his excitement in playing in China soon.

“All I can say is THANK YOU to the NBA, my family, inner circle, every fan who came to watch or rooted for me during these last 9 years! To challenge stereotypes, make history, rep Asians at the NBA level and pave the path as others have done for  me has been an absolute privilege. I’m overwhelmed with gratitude for each person who has been with me each step of the way.

Equally excited for this next step with the Beijing Ducks! I always knew my path would go through the CBA solely bc I knew how much of an honor it would be to hoop in front of all my Chinese fans. I’m here now and there is more history to be made!”

Lin has career averages of 11.6 points, 2.8 rebounds, 4.3 assists and 1.1 steals per game. The highlight of his career was during the 2011-12 season when he came out of nowhere to steal the spotlight for the New York Knicks and ignite the “Linsanity” movement. That career season earned him a name in the league, but he bounced from one team to another after that. Lin has also played for the Lakers, the Hornets, the Houston Rockets, the Brooklyn Nets and the Atlanta Hawks.

While the 31-year old point guard is not known for his playmaking, he has an excellent knack in driving to the rim for a creative finish. He is also a decent perimeter shooter, and can find open teammates for kick-out opportunities. Time will tell if Lin is still planning an NBA comeback, but we’re definitely more than happy that the humble guard will get to run his own plays again.

The Brooklyn Nets are making the right moves this summer. After inking stars Kyrie Irving and Kevin Durant to multi-year deals, the Nets have locked up a young bright asset for their future. Combo wing Caris LeVert and the Nets front office have agreed to a three-year, $52.5 million extension, per Brooklyn’s official page at NBA.com. This comes just a year after LeVert sustained a horrible foot injury, but came back in February and averaged 21.0 points, 4.6 boards and 3.0 assists during their postseason matchup against the Philadelphia 76ers.

Nets general manager Sean Marks expressed his excitement on the deal, and emphasized how deserving LeVert is of the lucrative extension.

“Caris personifies what it means to be a Brooklyn Net, and we firmly believe his best basketball is in front of him. The growth he has displayed in his first three seasons is  a testament to his tireless work ethic, along with an unrelenting will to maximize his talents and achieve team success. Our entire organization is excited to continue to have Caris as one of the leaders of our program moving forward.”

In his three-year stint in Brooklyn, LeVert has started 61 games for the team. The 25-year old small forward has given the squad a solid playmaker at the wing, while also providing excellent shot-making and perimeter shooting. He also averaged 1.1 steals per contest last season, proving that he can also compete on the defensive end of the floor. LeVert will head the Nets’ solid supporting cast that includes sweet-shooting forward Joe Harris, defensive player Taurean Prince, and rim-protecting center DeAndre Jordan.