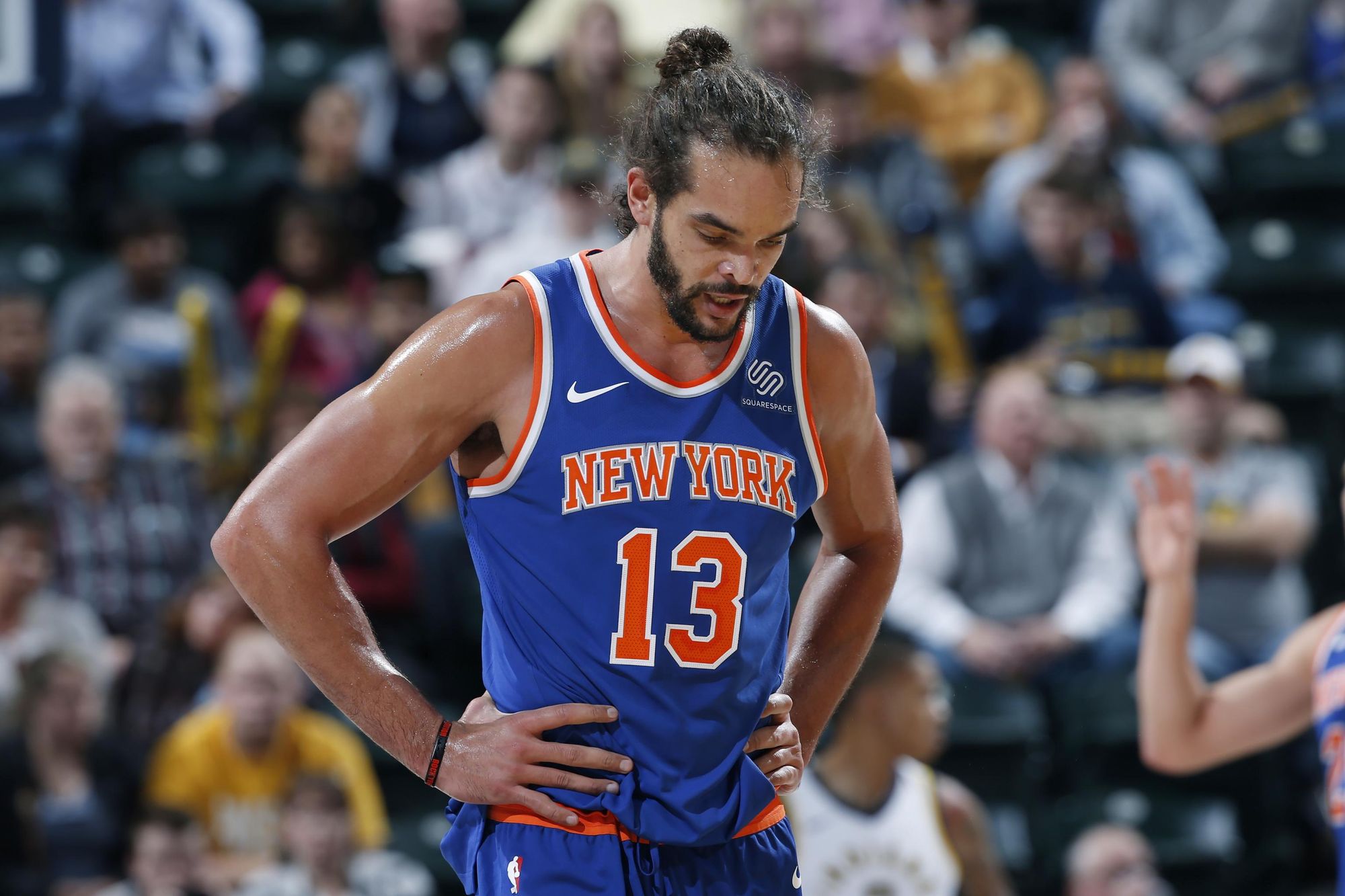 There is no doubt that the league has become a perimeter-oriented game. The pace-and-space offense that’s ruling the NBA has forced teams to feature more small-ball line-ups. Traditional big men who can’t space the floor with three-point shooting see their playing time decrease a lot, even the good ones. Take for example the case of the Portland Trail Blazers’ newly-acquired center Hassan Whiteside. While playing for the Miami Heat last season, Whiteside racked up massive per 36 minute averages of 19.1 points, 17.6 rebounds and 2.9 blocks per contest. You would think that a player with that stat line should be playing more than 30 minutes every game, right? Well, it’s not even close. The 30-year old rim-protecting big man only averaged 23.3 minutes per game for the Heat, and lost his starting job to a young Bam Adebayo.

Still, Whiteside has been effective in his reduced role. It’s just that he cannot keep up when opposing teams go small-ball during the fourth quarter. His inability to defend multiple switches would always force Heat head coach Erik Spoelstra to put in the more mobile Adebayo. But as you can see, big men are still needed by teams to play quality minutes and protect the rim on the defensive end. Whether it coming off the bench or setting the defensive tone by playing a few minutes with the starting five, there are still a bunch of big men available on the free agent market.

We can’t forget that Noah is coming off an impressive season with the Memphis Grizzlies. He averaged a decent stat line of 7.1 points, 5.7 boards and 2.1 assists, while only playing 16.5 minutes per contest. That tells us how Noah can be efficient on a limited playing time, an important asset that playoff-contending teams are looking for at this time. He may be just a shade of his All-Star self, but his defensive IQ and playmaking are deemed very valuable for a second unit contributor.

Noah actually had the golden opportunity to play with LeBron James this season, his rival opponent during the heated playoff games between the Chicago Bulls and the LeBron-led Heat. Before the Los Angeles Lakers decided to take a second chance with Dwight Howard, ESPN’s Adrian Wojnarowski reported that the team also scheduled workouts for Noah and former Golden State Warriors stretch big man Marreese Speights.

The Lakers went with Howard instead, believing that a locker room filled with strong personalities like LeBron, Rajon Rondo and Anthony Davis can really toughen up the 33-year old big man. However, there are some league figures who believe that Noah could have been a better fit for the quality contributor role that the Lakers have in mind for Howard. During an episode of the ESPN’s “Get Up!”, analyst Jalen Rose pointed to Noah when co-host Mike Greenberg’s asked him on who the Lakers should have added instead of Howard.

“Because I saw him produce last year. Remember, last year Dwight Howard had a mysterious ‘gluteus maximus’ injury that kept him from performing. I saw Joakim Noah play basketball with Memphis last year.”

So why is Noah still in search for a home in the NBA? It could be because of the heavy mileage that Noah has put in during his 12-year career. The Athletic’s Zach Harper chimed in on that thought.

“His body has been pretty beat-up over the last few years. All of those minutes, games, years, tours through the Tom Thibodeau wringer left Noah a shell of his former self for a while. At 34, Noah can still be a defensive presence, but it’s not the same guy who has hedging, tagging and recovering in the blink of an eye on any pick-and-roll  action. We know he’s not much of a scorer. He wasn’t one when he was healthy and young. So there are just limitations with his body, age and skill set that keep some teams away.”

This should also be the reason why an off-the-bench role is of mutual benefit for him and the team he will potentially play for. The wear-and-tear that he endured during the Bulls’ consecutive playoff appearances since his sophomore year has taken its toll on his body and performance. If the Lakers’ second experiment on Howard doesn’t succeed again, they could bring in Noah provided that he is still unsigned. The Celtics can also be a viable option. The departure of defensive swiss knife Al Horford will leave a big hole in their frontcourt. They may have signed an offensive weapon in Enes Kanter, but his weakness lies on the defensive end. Noah can definitely help in that area.

Who would have thought that Faried will have his second-most productive season with the Rockets last year? When the Nets waived him after just 12 games, the Rockets took a chance on the athletic forward and was rewarded with huge gains. Faried would log in 24.4 minutes each night, racking up 12.9 points and 8.2 boards per contest. He became a perfect pick-and-roll partner for James Harden, an area that he has always thrived in.

But his minutes would drastically decrease come playoff time. During the 2019 postseason, Faried only played 9.3 minutes in six games and was not used during the team’s last four games against the Warriors. It was understandable why the Rockets scarcely used him in the first round against the Utah Jazz. The Jazz had the towering Rudy Gobert, and Faried was heavily-undersized against the Frenchman. But during the Warriors match-up, it seemed like the Rockets coaching staff forgot they have Faried on the roster. He could have matched up against Draymond Green, also an undersized big man. So what could be the team’s reason for benching him? Harper has an answer to that query.

“He’s another one of those guys that we think of fondly, but he’s actually not very good. His athleticism and rebounding make his activity look incredible. And he is quite active on the floor. It’s just often that activity is going to the wrong places,  especially on defense. His role-player model is kind of outdated because he can’t shoot and he can’t defend.”

Faried, once thought as the cornerstone of the Denver Nuggets franchise, has seen his production decrease over the years. He came into the league in 2011, and made noise from the get-go. He was such an impactful player on both ends of the floor that the Nuggets gave him a lucrative four-year, $50 million extension in 2014.

It was just a couple of seasons ago that Gortat put in a double-double average. He logged in 31.2 minutes per game for the Washington Wizards during the 2016-17 season, and produced 10.8 points and 10.4 rebounds. The Clippers acquired him last season, hoping that he could be a frontcourt anchor on both offense and defense. He was a regular starter for the team but actually only played 16 minutes each night. The Clips waived him last February, mostly because the squad has set their sights on giving more playing time to Ivica Zubac and Montrezl Harrell.

But the 35-year old Polish center is still capable of being effective in limited minutes. He may not have developed his three-point shooting, but Gortat can space out the floor with his mid-range game. He also has the post moves to contribute bonus points off the bench. But Gortat’s real asset still lies on the defensive end, something that Clippers president of basketball operations Lawrence Frank emphasized when the team released the big man last season.

“We will miss the toughness Marcin brought to the group. He was a tenacious defender and screen-setter, and we are grateful to have been a part of his long and distinguished career.”

It was also reported last season that after the Clips waived him, Gortat actually turned down a lot of offers from playoff-bound teams. It turns out that Gortat was only interested in signing for the Warriors, obviously in a bid to win a championship.