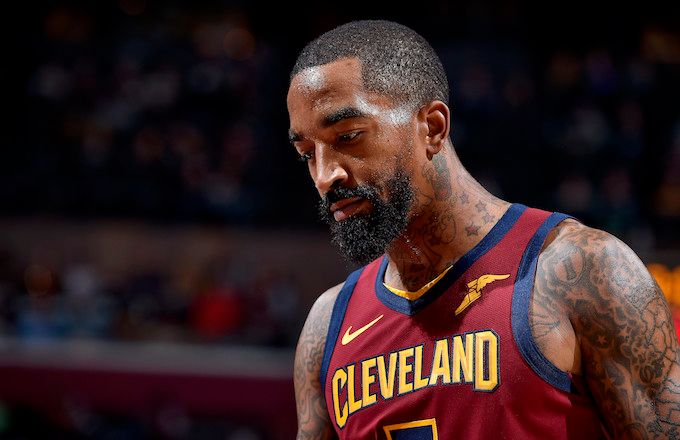 We are a month away from the start of the NBA training camp. Now is basically the time when teams around the league fill out their training camp roster – a line-up that usually consists of 17-18 players. The routine is that teams will try out some young, unproven players and veterans and filter those they think can contribute to their system. Veteran shot creators like Carmelo Anthony and Joe Johnson are still in the market, and it won’t be a surprise if teams take a chance on these two All-Stars. But with the way the game has transformed to a pace-and-space system, floor spacers who can also play defense are badly needed by playoff-aspiring squads. Here is a list of the best available free agents who can shot the lights out from deep, and also has the willingness to gut it out on the defensive end.

He may have just played 11 games with the Cleveland Cavaliers last season, but Smith is still way better than many people believe. After all, his season was cut short not because of his ineffectiveness. The Cavaliers opted to take the route of giving more minutes to the team’s younger players in order to develop them faster. It was very obvious that the veteran gunner, who turns 34 in a couple of days, is not part of that player development plan.

“Misperception of players is one thing that has always bothered me. As coaches sometimes we have to really dive into relationships and get to know who players are not what we hear or read. None of us are perfect! @teamswish is  a @nba #champion bonafide #sniper a great teammate and just a good dude even tho you from jersey. Keep working fam your services will be needed! We family for life!”

Although he was known to be an inefficient volume shooter in the early part of his career, Smith has grown to be a capable team player especially when he joined LeBron James and the Cavs during their title runs. He has also developed a liking for defense during his Cavalier years, and should still be an above average 3-and-D wing for any team.

Also, Smith has been aggressively staying fit this offseason in hopes of finding a new home in the NBA. He is reportedly working out with Lakers star LeBron James and Oklahoma City Thunder’s newly-acquired vet playmaker Chris Paul. It also seems like the NBA is the only target in sight for Smith, as Sportando’s Emiliano Carchia reported that the veteran has rejected an offer to play for the Jiangsu Dragons of the Chinese Basketball Association.

ESPN’s Adrian Wojnarowski also reported last July that Smith is “unlikely” to be given a roster spot by the Lakers. It’s easy to understand why because the Lakers are already filled out in the wing position, having acquired Avery Bradley, Troy Daniels, and Danny Green in free agency. The team also re-signed swingman Kentavious Caldwell-Pope.

Smith, a former Sixth Man of the Year, could take his talents to contending teams in dire need for excellent perimeter shooting. The Heat and the Pistons should be keeping tabs on the 2016 NBA champ.

I have to say that Sefolosha is the most overlooked free agent 3-and-D wing right now. A 6-foot-7 swingman who can play positions 2-4 on both ends of the floor, Sefolosha has been steadily improving this consistency in shooting beyond the arc. More importantly, his ability to effectively switch on defense and lock down the opponent’s best perimeter player should already be his pitch to contending teams.

Sefolosha spent the past couple of seasons playing for the Utah Jazz. In the 50 games he played last year, the 34-year old defensive stalwart averaged an outstanding 44% clip from three-point territory. One would think that the Jazz will not hesitate to re-sign him, right? That didn’t happen and it appears that Sefolosha’s wife wasn’t happy living in Utah, per NZZ’s Roman Schuppli.

“Sefolosha’s wife had suffered in the conservative state, in which rigid moral concepts are widespread, and could not develop. During her career she has always put her own    interests and needs behind her and made great sacrifices,” says Sefolosha. “Now she has spoken out against another engagement in Salt Lake City. Compared to the past   few years, when Sefolosha had to make similar decisions about his sporting future, he now involves the family much more in the planning.”

But even if his partnership with the Jazz has ended, he could still garner a lot of interest from teams. Brian Michael Jacobs of The Painted Lines tweeted out that the veteran has attracted the sights of the 76ers. The Sixers still needs more floor spacers on their roster, and Sefolosha could be a nice target.

“The Sixers and Thabo Sefolosha have a mutual interest. A team source told me that “he is on the list” which is consistent with everything I’ve heard up until this point. I won’t be surprised if he’s on the team in 2019-20, but nothing is final yet.”

It’s still a mystery why Sefolosha is still without an NBA team, but that should not last for long. Even if not a single team signs him before training camp, a lot of playoff-bound squads look for quality veteran role players before the postseason begins.

Some might be confused why I put Shumpert on this list, given that he only shot 30% from beyond the arc for the Rockets last season. But it’s not as if Shump isn’t a threat from that area. He may have struggled last year but he has eclipsed 35% three-point shooting four times in his career, while also producing a career-high of 40% during the 2012-13 season.

Shumpert naturally plays the point guard position, a role that he has done wonders in with the New York Knicks. He has a good size (6-foot-5) for the 1 position. Although his teams have opted to place him on the shooting guard role more often, Shumpert can still manufacture plays and sets if he has to.

More than his perimeter shot, the greatest asset of his offensive game is his ability to drive to the rim for a strong finish. Most importantly, Shumpert has proven himself as a tough defender. His length and mobility helps him switch through the 1-3 positions, while his strength and athleticism aid him in keeping up with the best wing players of the opposing team.

Shump last played for the Rockets, and signs point to him staying with the team. Although Houston hasn’t signed him yet, they need Shumpert’s services as they still don’t have a tested and proven lockdown perimeter defender on their roster. The Blazers could also be an option for Shump. Portland may have acquired the likes of Kent Bazemore and Mario Hezonja, but there is no doubt that Shump could do more things on both offense and defense.