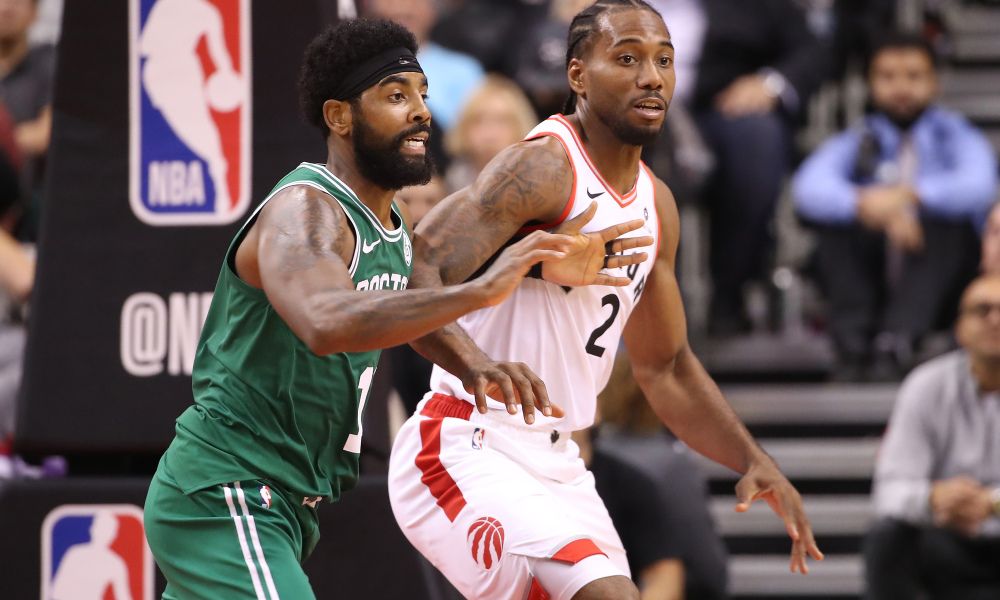 NBA Free Agency News: Kawhi Had Eyes On Kyrie and Durant Before Pairing With George

Kawhi reportedly recruited Kyrie and KD to play with him

While the news all over the media has been about the Los Angeles Clippers pulling off a successful heist by signing two-time Finals MVP Kawhi Leonard and trading for superstar forward Paul George, many are still wondering how the whole process unfolded for both the Clippers and Kawhi. It turns out that Leonard was actually active throughout that period, recruiting the likes of George, Kevin Durant and even Kyrie, per Zach Lowe of the ESPN.

“In one backroom power move, Kawhi Leonard rescued Paul George from a capped- out low-level playoff team; rejected the Lakers' attempts to build perhaps the greatest big three in basketball history; and left the league as open as it has been in years. The league's quietest superstar "found his voice," as one executive put it. He recruited George, Durant and even Kyrie Irving at points, sources say.”

Leonard has always reiterated his desire to go back home to Los Angeles and finish his career in his hometown. The Toronto Raptors knew about this even before they traded for him in the summer of 2018, but the organization banked on their winning culture and avid fan base to turn the tables around. Leonard went on to lead the Raptors to their first NBA championship, causing the city of Toronto to a frenzy as they appealed to Kawhi’s camp to stay with the team.

With many expecting Kawhi to either re-sign with the Raptors for a short-term deal or form a Big 3 star power with LeBron James and Anthony Davis with the Lakers, the Klaw instead surprised all of us by signing with the Clippers and bringing with him the multi-dimensional skill set of George. Another surprising fact that came out of this process is the fact that Leonard has been hands-on throughout the recruitment, even personally placing a call to Durant at one instance, per ESPN’s Ramona Shelburne.

"Durant got a call from Kawhi Leonard, asking if he'd consider teaming up with him and signing with the LA Clippers. They'd be great complements to each other, Leonard told Durant. He'd always admired him and had tremendous respect for him  as a competitor.

Durant was flattered and more than a little stunned, according to sources close to the situation. He didn't know Leonard that well, so getting a recruiting call like that made a real impression."

Durant and Irving instead joined forces at the Brooklyn Nets, though Durant is expected to miss the entirety of next season as he recovers from the Achilles injury he sustained while playing for the Golden State Warriors during the recently-concluded NBA Finals. Still, it was quite a change of character for Leonard, and his pulling gravity to gain the interest of other superstar to come play with him should bode well for the Clippers’ future.

With more and more NBA teams losing interest on giving him an opportunity to prove that he can still contribute on the court, Carmelo Anthony might now be considering retirement especially if he won’t be able to sign with a team next season. Melo talked with Huffington Post’s Taryn Finely about the possibility of him hanging up the sneakers this year.

Anthony averaged 13.4 points and 5.4 rebounds per game for the Houston Rockets last season, but played only 10 games before being released by the team. There were reports that he would have signed with the Lakers to help them with their playoff push, but with the Lakeshow at the near bottom of the Western Conference standings, that possibility never turned to reality.

However, if there is a team willing to take in Anthony next season, it would still be the Lakers. New York was a possibility at first, but Anthony won’t opt to join a team of young, unproven players, per SNY’s Ian Begley.

“Let’s get this out of the way at the top: things can always change, but most executives monitoring Anthony’s free agency see the Lakers as the most likely destination for the 10-time All-Star.

There may have been interest from New York in a reunion with Anthony if they had a roster with multiple stars ready to win immediately. But with Durant injured and the odds against the Knicks building that kind of team this summer, bringing Anthony back is not currently part of the team’s thinking.”

But signing Anthony would still pose a lot of questions for the Lakers. By acquiring the likes of Danny Green, Jared Dudley, and Quinn Cook, along with bringing back Kentavious Caldwell-Pope, the Lakers have enough shooting in the perimeter but not a whole lot of defense. Rumors have it that the Lakers are still in the running to getting the services of veteran defensive specialist Andre Iguodala, who was waived by the Memphis Grizzlies after being traded there by the Warriors.

Tyson Chandler could head to Houston

With the Houston Rockets putting young starting center Clint Capela on the trading block, they could be looking to tap veteran center Tyson Chandler next season. ESPN’s Tim MacMahon reported that the Rockets will be offering Chandler with a backup role, something that the 37-year old defensive big man filled in for the Los Angeles Lakers last season.

“Source: Tyson Chandler is likely target for Rockets in their search for backup big. Chandler, who turns 37 in October, was effective defender and rebounder as reserve  for Lakers last year. He has a rep as a great locker room guy and strong relationship with CP3 from N.O. days.”

This very interesting development could also mean that the Rockets are bent on working out the Chris Paul-James Harden partnership once more. There were speculations that both star playmakers didn’t see eye-to-eye with the team’s offensive schemes, especially last season when they lost to a Kevin Durant-less Warriors in the semi-finals.

Chandler, who played 48 games for the Lakers and started in six, averaged 3.1 points and 5.6 rebounds in 16.4 minutes per game. He played with Paul during his three-year stint in New Orleans, a period in which Paul’s career was in full bloom.

On the other hand, Lance Stephenson, Chandler’s teammate at LA, hasn’t quite garnered interest in the free agency market, Scott Agness of The Athletic reports.

“As for Lance Stephenson, an unrestricted free agent — nothing is brewing for him.   He’s still seeking a new contract and may have to take a minimum-level deal.”

Stephenson, 28, averaged 16.5 minutes per game for the Lakers last season. He is still relatively young, and has the versatile skill set needed for a perimeter player nowadays. Stephenson averaged 7.2 points, 3.2 rebounds and 2.1 assists per game last year, including a decent clip of 37% from beyond the arc.