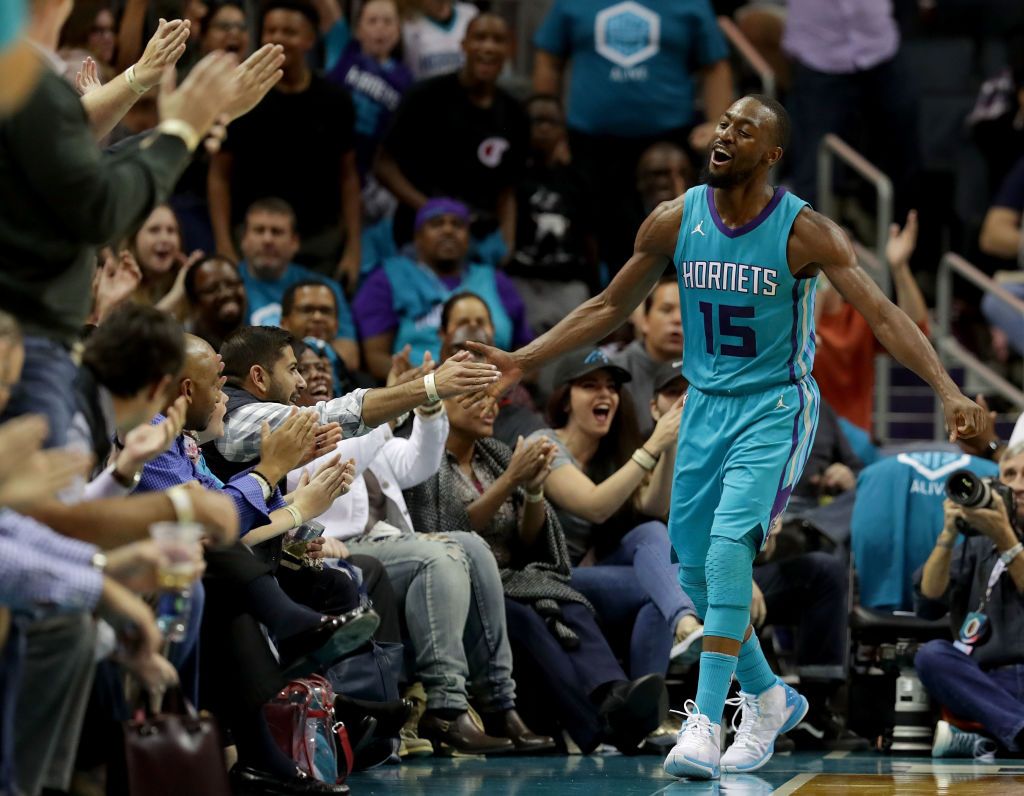 Kemba’s priority is to re-sign with Hornets

While he will have the golden opportunity in the summer to choose whatever NBA team he wants to play for, All-Star point guard Kemba Walker has reiterated that his main priority would be to work out another contract deal with the Charlotte Hornets, per Jared Weiss of The Athletic.

“Oh no question, Charlotte’s definitely my first priority. That’s where I’ve been for eight years and that’s all I know. Not many people get a chance to play for one NBA team throughout their career.

Charlotte is my home, man. I’ve been there for eight years and it’s been the most amazing eight years of my life. My family, they love it. The fans love me. The organization has been great and gave me my opportunity.”

Walker, who has posted career-high numbers of 25.6 points, 4.4 rebounds and 5.9 assists per game, has solidified himself as an elite point guard in the league. He was a starter in his third All-Star appearance this year, and was voted to the All-NBA third team that earned him the eligibility to sign a super-max contract this offseason. Charlotte could offer him a massive deal of five-year, $220 million to entice Walker to remain a Hornet.

While winning isn’t just the main factor in Kemba’s decision, the spitfire 6-foot-1 guard is already 29 years old and there’s just a few years left before he enters the twilight stage of his career. Winning a championship should already be clouding Walker’s mind, and it’s hard to imagine how the Hornets could build an elite team around him.

The Hornets still have a lot of bloated contracts to move around like the deals they gave to Nicolas Batum, Bismack Biyombo, Marvin Williams, and Cody Zeller. None of those names spell out All-Star potential, and it will be really difficult for the Hornets to find a suitable trade partner for those players and receive a solid package in return. Charlotte could dangle young guns Malik Monk and Miles Bridges to garner more interest from other teams.

Among the teams interested in signing Kemba are the New York Knicks, the Utah Jazz and the Dallas Mavericks.

In an effort to retain the team’s core moving forward, the Philadelphia 76ers are rumoured to be bent on offering the max deal to two-way superstar Jimmy Butler, per Brian Windhorst of the ESPN. The Sixers acquired Butler through a trade deal this season, and has been instrumental in the team’s semi-final finish in the playoffs. Windhorst says that he talked with NBA executives, and their belief is that the Sixers aren’t looking elsewhere for a top-tier player to pair with Ben Simmons and Joel Embiid.

"I've been talking to some executives this week and the executives, I think, now believe  that the Sixers will [offer a max contract]. I don't know about the fifth year, like, full guaranteed, but yeah."

Butler averaged 18.7 points and 5.3 rebounds in the regular season, and became the Sixers’ main scorer in the playoffs as Embiid labored with a knee injury and Simmons and Tobias Harris putting up quiet scoring nights. There were reports at first that Butler didn’t see eye-to-eye with the Sixers coaching staff when it comes to the team’s offensive schemes, but they obviously worked it out at the later stages of the season as Butler’s chemistry with his teammates greatly improved.

Still, it won’t be easy for Philly to arrange a stronger team if they sign Butler to a max extension. Derek Bodner of The Athletic reports that the Sixers will gain more financial flexibility if they re-sign Harris (who will also be an unrestricted FA) instead, and let Butler sign elsewhere.

“If Harris walks but Butler stays, things become a bit dicier. Renouncing all free   agents except Butler puts the Sixers at just under $30 million in available space, which is a good chunk of change to work with but short of both the 30 percent ($32.7 million) and 35 percent ($38.15 million) max salary slots.”

If the Sixers keep Harris instead, they could still nab a max free agent in the summer like Kawhi Leonard or nab a near-max All-Star in Khris Middleton to space out the floor and give Simmons and Embiid more room to operate inside. For Butler, he still has plenty of suitors to choose from. The Knicks, the Brooklyn Nets, the Los Angeles Clippers and the Los Angeles Lakers are reportedly interested in the services of the 29-year old forward.

With the Miami Heat entering the first year of the post-Dwyane Wade era, team insider Greg Sylvander reports that the Heat is interested in acquiring the services of scoring point guard Isaiah Thomas this offseason.

Sylvander says that there are, “indications” that “the Heat will at least explore signing Isaiah Thomas this summer as a (low cost) scoring option.” Three years removed from Thomas’ incredible 2016-17 season averages of 28.9 points and 5.9 rebounds per contest, the 5-foot-9 guard has become a hot potato around the league, bouncing from team to team in search for a roster that could use his unique skill set. He signed with the Denver Nuggets this season, but only appeared in 12 games and normed 8.1 points and 1.9 assists per game.

The Heat should have plenty of reasons why they want Thomas next season. Rumors circulating around the league that the Heat is in search for a trade partner for starting point guard Goran Dragic, while they also try to deal the massive contracts of Dion Waiters, James Johnson and Hassan Whiteside. If they could be successful in trading away those massive contracts, Pat Riley’s grand plans of landing max free agents in 2020 and 2021 could just be a reality.

For Thomas, we expect that he would agree to another contract ranging from $2M to $4M as he continues to go back to his old, deadly form and prove to the league that he still has the dangerous scoring punch he had during his stint with the Boston Celtics. The hip injury that hampered his progress should be long gone by now, so it’s all about grabbing a fitting opportunity for Thomas moving forward.

Will Kawhi stay in Toronto?

Reports are circulating that Kawhi Leonard, arguably the most dominant player this postseason, will remain with the Toronto Raptors beyond this season and sign a short-term deal, per True Hoop’s David Thorpe.

“Of course, he’s about to become a free agent. And because of that, as the media you might expect to hear sunny things about Kawhi’s return from Raptors sources eager  to tamp down the impression Kawhi is bound for the Clippers or another team.

But even before the Finals began, we at TrueHoop heard from plugged-in sources   associated with players and the league — but not the team — that Kawhi would  return to Toronto, at least on a short-term deal.”

With the Raptors’ incredible success this playoffs, it’s really difficult for Kawhi to jump ship and not continue the winning culture they are building up in Toronto. Toronto 1050’s Michael Landsberg also reported that the superstar forward has purchased a property in Toronto, a soft indication that there’s a strong chance that he will indeed re-sign with the Raps.

Still, the Clippers remain the frontrunners to sign Leonard this summer. Kawhi also bought a home in San Diego last year and many pundits believe that returning to the comforts of his home town greatly factors in to his decision.

Kyrie’s decision boils down to Lakers and Nets

Kyrie Irving will be a Top 3 free agent this summer, and there’s no shortage as to the rumors that surround the All-Star point guard’s decision. Ric Bucher of Bleacher Report appeared on “The Herd with Colin Cowherd” podcast and emphasized that Kyrie’s options have been narrowed down to the Lakers and the Nets.

“The latest that I’ve heard is that it’s between Brooklyn and the Lakers. And I’ve heard that the Lakers and Kobe Bryant – now Kobe told me, or indicated to me, that he was not involved. That he was, ‘Hey, that’s their deal. I’m not part of it.’ But I was  told in the last 24 hours, Kobe has been busy recruiting Kyrie, in particular, to try to get him to the Lakers.”

Bucher also mentioned that the Nets are still the favorites to land Kyrie, and that he has already purchased a property in New Jersey. Irving, who has averaged 23.8 points, 5.0 rebounds and 6.9 assists per game this season, has failed to steer the powerhouse Celtics team to another deep postseason run this year. His chemistry with his teammates hasn’t been regarded as a positive one, and there are notions that the Celtics aren’t that desperate in pitching for Kyrie to remain in Boston.

Also rumoured to be in the running for the Kyrie sweepstakes are the New York Knicks, who are also bent on forming a superteam as they court the services of Golden State Warriors star forward Kevin Durant.