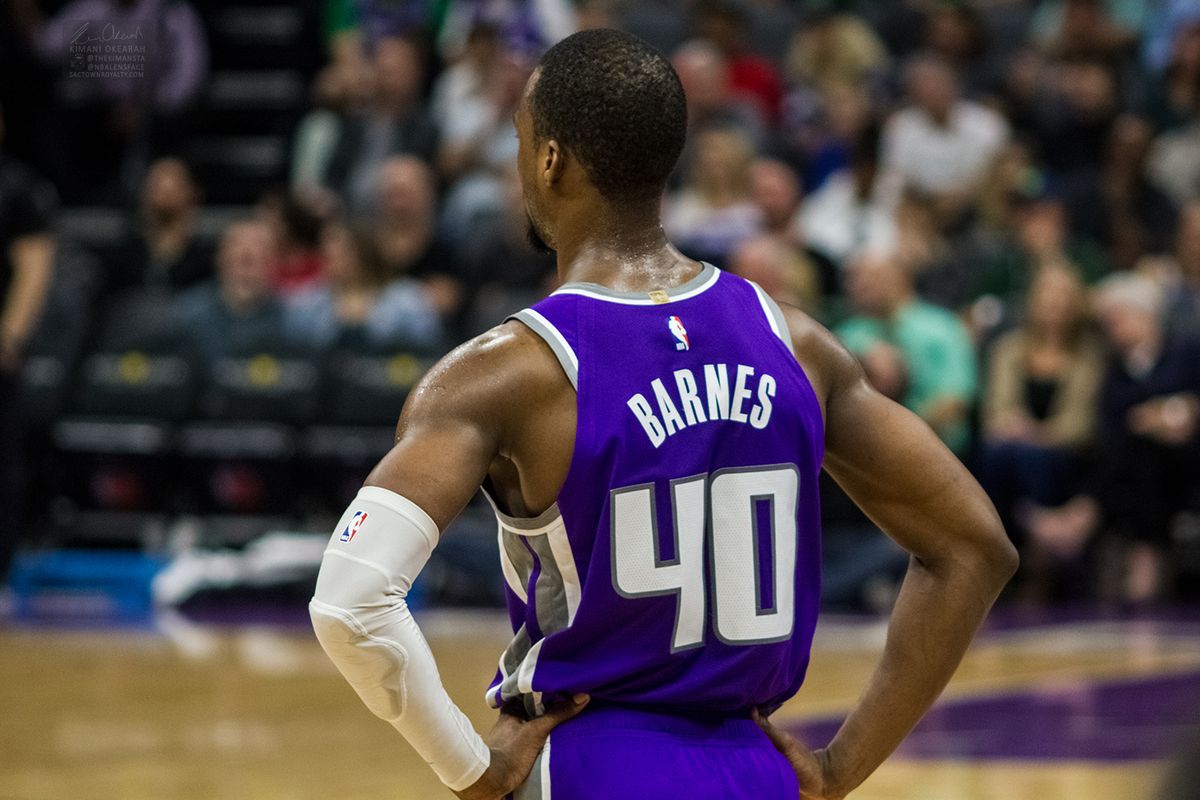 Sacramento Kings scoring forward Harrison Barnes received a four-year, $85 million contract extension this summer. However, the 27-year old gunner has been underperforming at this early part of the year. Barnes is only averaging 11.0 points and 5.5 rebounds per contest, numbers that are very low for someone earning $24 million this season. To make matters worse, Barnes is hitting a measly 30% clip from three-point territory, a drastic dip from his 41% clip last season. Scoring and three-point shooting are two of the most important factors why the Kings gave him a lucrative extension, but it’s safe to say that the eight-year veteran is not fulfilling his end of the deal.

Although the sample size is small as the Kings have just played through four games, things are not looking bright for Barnes and the team. It even got to the point that the Kings front office are now reportedly regretting offering Barnes the $85 million extension, although a source inside the organization has denied this rumor. NBC Sports’ James Ham tweeted out his inside look at the situation.

“According to a league source, the Kings are not having buyers remorse, as reported  earlier today, from the signing of Harrison Barnes to a four-year extension this summer. Barnes is considered an important piece to their young core.”

Ham refuted a report by The Athletic’s Shams Charania regarding the apparent remorse from the Kings organization. At that time of Charania’s report, the Kings were in the middle of contract extension talks with shooting guard Buddy Hield. Hield initially refused an extension offer from the team, but later signed on a more incentive-based contract. With Hield and Barnes locked up on multi-year contracts, the Kings still have plenty of financial matters to figure out. Bogdan Bogdanovic, another young budding perimeter player, is set to enter restricted free agency in 2020. De’Aaron Fox and Marvin Bagley III will also be eligible for rookie-scale extensions in the next couple of years.

Yet, star power is still missing in Sacramento. Even if they secure all those names, the team would still need a top-tier superstar to take them to greater heights. Of course, these are very young players who have lots of room to really improve. However, it’s not just Barnes who is experiencing a dip in production. Fox’s numbers are down to 16.3 points and 6.0 assists, while Bogdanovic’s stat line is down to just 8.5 points and 3.3 assists per contest. Hield is the one in a major dip as his scoring has decreased to 14.3 from a career-high of 20.7 points last season.

On top of that, the Kings are off to a frustrating 0-5 start to the season. Their system under new head coach Luke Walton is obviously not working quite well. Trevor Ariza, the veteran defensive ace that the team acquired this offseason, points out to their effort as the main cause of their losses.

“It shouldn’t (an issue), but it happens, it happens with everybody, no matter how long you’ve been in the league - short time or long time. There’s always a switch that turns on at some point where you tell yourself, okay, the thing that I can control is the effort. When you figure that out, everything else just falls into place.

I think we’re at a point where we know what we have to do as a team. We have to continue to keep each other accountable and continue to go out and execute our game plan.”

It’s an incredibly disappointing start for the Kings, a team pegged by many experts as a playoff contender in the Western Conference. The Kings were the surprise team of the conference last year, but close-call losses spelled their exclusion from the playoff seeding. Instead, they fired head coach Dave Joerger after the season and installed Walton at the helm. If the Kings continue disappointing like this, we may have to question the organization’s move of breaking continuity and putting in a new head coach.

Raptors to pursue Giannis in 2021

A week ago, Milwaukee Bucks superstar forward Giannis Antetokounmpo grabbed the headlines when his interview with Anita Elberse, a Harvard University professor, surfaced in an article by Rick Romell of the Milwaukee Journal Sentinel. The reigning MVP told Elberse that re-signing with the Bucks would be a hard decision to make if they don’t do well this year and during the 2020-21 season.

"I want the Bucks to build a winning culture. So far, we have been doing great, and, if this lasts, there's no other place I want to be. But if we're underperforming in the NBA next year, deciding whether to sign becomes a lot more difficult."

The emergence of Antetokounmpo has helped the Bucks reach new heights at this latter part of the decade. They made it to the Eastern Conference Finals last season, but lost to Kawhi Leonard and a highly-inspired Toronto Raptors team. The Bucks front office also did a great job in the offseason as they retained key cogs Khris Middleton and Brook Lopez, while also acquiring quality veterans like Wes Matthews and Robin Lopez.

But Antetokounmpo’s statement on his impending free agency has already gained traction in the league. The Athletic’s John Hollinger recently reported that the Raptors are very interested in pursuing the Greek Freak in 2021.

“Oh, and did I mention — there is one giant, long-armed Greek shadow looming over every decision this franchise makes. Sources say the Raptors are likely to be one of the chief pursuers of Giannis Antetokounmpo if and when he hits the 2021 free-agent market, so any moves that eliminate the possibility of max cap space that summer would be extremely unlikely.”

The defending champs just lost Kawhi to free agency this summer as the two-time Finals MVP decided to go back home and play for the Los Angeles Clippers. By 2021, the contracts of the Raps’ key players will be gone from their salary book. Marc Gasol and Serge Ibaka will become free agents next year, while Kyle Lowry will be a free man in 2021. The only lucrative contract the Raps will have in 2021 will be Pascal Siakam so it’s safe to say that Toronto has the financial capability to offer a max contract to Antetokounmpo.

What’s next for Iggy and the Grizzlies?

The Memphis Grizzlies are still to make a concrete decision on how it will deal with Andre Iguodala’s situation. When they acquired Iguodala as a piece in a trade package from the Golden State Warriors, the belief was that the veteran defensive stalwart would not play a single minute for the rebuilding Grizzlies. That holds true until today, although many are wondering if teams are interested in trading for Iggy’s $17 million payday this season.

Furthermore, Iguodala has made it known that he is only interested in playing for an elite contender. During a sit-down with Zach Lowe on an episode of The Lowe Podcast, ESPN’s Adrian Wojnarowski says that Iguodala will be choosing between the Lakers and the Clippers should the Memphis agrees to buy out the vet’s contract.

"It's the two L.A. teams. It's the Lakers and it's the Clippers. If there is a buyout at some point, if Memphis can't trade him, that's where that will come down to, those two teams.

Iguodala is OK with sitting right now. Iguodala's fine with seeing what the       landscape looks like and then jumping in on the season a little later. You're signing Andre Iguodala or trading for him for the postseason."

Both the Lakers and the Clippers don’t have the assets to enter a trade deal so these two teams are hoping that Iguodala and the Grizzlies reach an agreement on a buy-out. Iggy is coming off a career-low season that saw him average 5.7 points, 3.7 rebounds and 3.2 assists per contest. But the 35-year old’s importance always come up during the playoffs, when he increases his production and fulfills the role of a defensive anchor for his team.