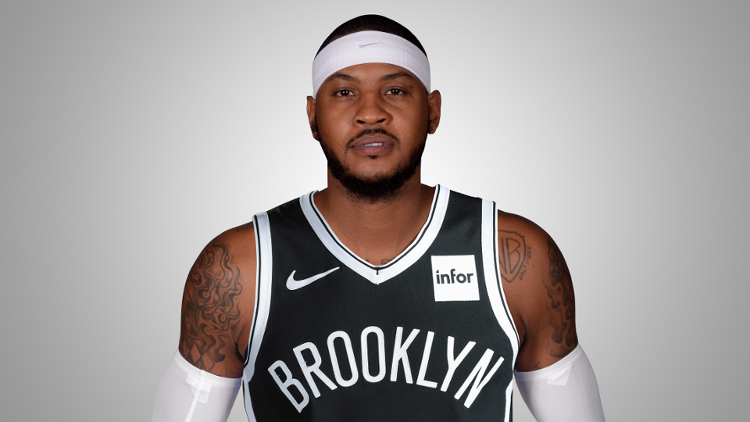 Carmelo Anthony is still unemployed as of today, but the light at the end of the tunnel is beginning to show for the veteran scorer. Frank Isola of The Athletic recently reported that the Brooklyn Nets could be a potential suitor for Anthony, and that two of its newly-acquired stars in Kyrie Irving and Kevin Durant are the ones pushing the team to acquire the 35-year old small forward.

“Carmelo Anthony is scheduled to work out on Thursday with a group of New York Knicks in Manhattan but it’s the other team in town that continues to closely monitor the 10-time All-Star.

The Brooklyn Nets remain interested in potentially signing Anthony, who recently trained with a group of their players in Los Angeles, including Kyrie Irving. In fact, one source told The Athletic that Irving and Kevin Durant, who both joined the Nets in July, are “pushing” the club to sign Anthony.”

Anthony, interestingly a Brooklyn native, has been diving deep in workouts this summer and was recently seen scrimmaging with the New York Knicks. But it appears that the Nets are more interested in him, considering that they need another shot creator with Durant set to miss most of the season due to his recovery from the Torn Achilles injury he suffered during the 2019 NBA Finals.

Wilson Chandler, another valuable combo forward, has been suspended by the NBA for testing positive in performance enhancing drugs, forcing him to miss the first 25 games of the upcoming season. Aside from Kyrie, Spencer Dinwiddie and Caris LeVert, Brooklyn doesn’t have the luxury of a proven shot creator at the wing position. Anthony could definitely help bolster that weakness, especially if he comes off the bench.

The ten-time All-Star has been out of the league since the Houston Rockets waived him after just 10 games last season. Still, Anthony has been reiterating his interest for a comeback, and he is showing it by keeping his body fit and working out with other NBA players this offseason.

Carmelo’s persistent attitude could be rewarded very soon. Isola also reports that Sean Marks, the Nets general manager, has been keeping tabs on the vet’s progress although Isola emphasizes that it’s still “unclear if Marks is willing to take a chance on Anthony.”

“Marks, according to a source, did watch Anthony train recently in what was  described as an informal workout. Nets head coach Kenny Atkinson has also watched  Anthony play this summer.

Anthony’s camp remains optimistic that the veteran forward will find an NBA job. A Nets source said Anthony’s recent workouts in L.A. “certainly helped his cause. His body looked great.””

Anthony’s unwillingness to have a reduced role has been one of the main factors why no team took a chance on him after the Rockets saga. However, the 6-foot-8 scorer has already given it much thought and told Stephen A. Smith of the ESPN that he is now ready to come off the bench and play whatever role his future head coach needs him to fulfill.

Aside from the Nets, Smith also says that Carmelo’s agent has talked to the Los Angeles Lakers, the Los Angeles Clippers, the Portland Trail Blazers and the Philadelphia 76ers to gauge their interest in acquiring the 2013 scoring champion.

Tucker wants Rockets to offer him a contract extension

Houston Rockets defensive stalwart P.J. Tucker has had an eventful offseason of competing for a spot in the USA national team before regrettably pulling out due to an ankle injury. He was expected to be a sure inclusion on the final roster, a capable three-point shooter who can also do it all on the defensive end. Despite having so much mileage in his 12-year basketball career, Tucker never hesitated in answering to the nation’s call, something that Team USA head coach Gregg Popovich took notice and praise, per The Athletic’s Kelly Iko.

“Well when we asked him to come, he jumped on it. That’s the first thing I remember. He really wanted to do it. He’s somebody who wanted it because he’s a competitor. He’s a grown man. He’s a little bit older, and he’s got a toughness about him. He’s a real pro. We have such a young team, bringing him into the fold and seeing how that works seemed to be right thing to do. He’s been wonderful.”

Aside from the excellent defense and perimeter markmanship he brings on the court, Tucker has also been a vocal leader for the national squad. Popovich says that the veteran forward always talks to his teammates and constantly reminds them to not slack off. His appearance for Team USA is the result for years of hard work and dedication to his basketball craft. After a forgettable rookie stint with the Toronto Raptors in which he averaged just 4.9 minutes in only 17 games, Tucker took his talents overseas. He spent five years away from the NBA, playing in pro leagues at Israel, Ukraine, Greece, Italy and Germany.

Tucker would then make a return to the NBA during the 2012-13 season, playing for the Phoenix Suns. The 6-foot-6 undersized power forward has been on a consistent roster spot ever since coming back to the league, and his role has further increased with the Rockets. Tucker told Iko that his belief in himself didn’t waver even when everyone crossed him out of the picture.

“I always believe in myself, nobody else believed in me. Nobody else thought I could be where I’m at right now, nobody counted me in, you know, they count me out. So for me it’s more, it’s bigger than proving people wrong, it was proving myself right. And that’s as big as anything to prove myself right, that I know I was right. So every day when I play, I think about all those times, so that’s why I play as hard as I do.”

His hard work has translated to his success on and off the court, and Tucker knows that he deserves a reward for everything that he contributes for the Rockets. With this season marking the final guaranteed year of his four year, $32 million contract, the 34-year old grizzled veteran expects the Rockets front office to offer him an extension now.

Undersized as he is for the power forward position, Tucker even took on the center position for the Rockets during the playoffs. Their young budding center, Clint Capela, was struggling with his play on both ends of the floor back then. That prompted Rockets head coach Mike D’Antoni to literally play small-ball by playing the 6-foot-6 Tucker as their center. That alone should warrant the veteran a very deserving extension.

D’Angelo says NBA is all about business

A new All-Star is coming to the Bay Area, and his name is D’Angelo Russell. It was just a while ago that the 23-year old point guard played in his first All-Star game and then led the uprising yet young Brooklyn Nets team to a playoff seed. Russell could have wilted when the NBA legend and former Lakers president of basketball operation Magic Johnson hinted that he is not a player capable of leading a team. Instead, D’Angelo slowly matured and his game did all the talking.

But the Nets front office was apparently not satisfied. They decided that the best and fastest way for them to go on a championship run was to acquire players with superstar status. Brooklyn signed Kyrie Irving, signalling the end of their partnership with Russell. The team would then deal Russell to the Golden State Warriors, initiating a sign-and-trade move to acquire Kevin Durant.

Now that Russell has been traded two times and will be playing for his third team in his fifth season in the NBA, he knows that the league is a business and there’s no use getting caught up with the negative side of it, per an interview with GQ’s Kevin Lincoln.

“Yeah. I mean, either you’re a part of the business, or you’re sitting back and you’re not a part of it. Every year, you have to gauge if you’re a part of the business, trades, contract extensions, or if you can be a guy who’s locked into a contract and not have to worry about it, can really sleep at night. That’s the main focus, I would say, just  trying to see where you are, [and to] be honest with yourself.”

With Klay Thompson still recovering from a Torn ACL injury and will be out until the playoffs, Russell has a big void to fill for the Warriors this season.