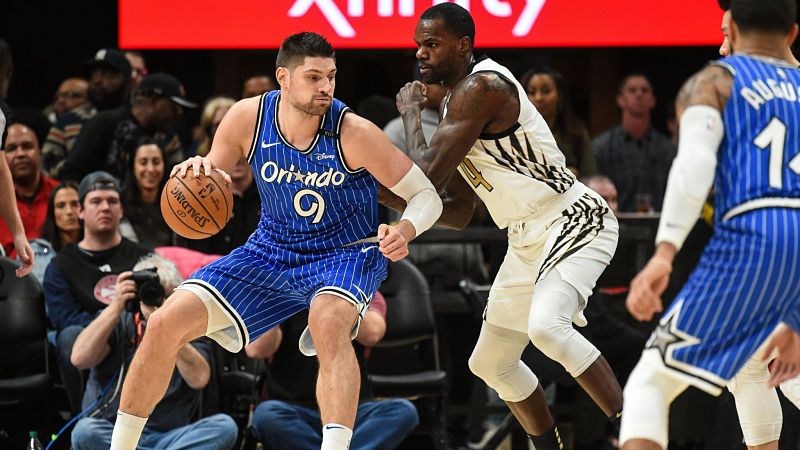 With impressive averages of 20.8 points, 12.0 rebounds and 3.8 assists per game last season, Orlando Magic sweet-shooting big man Nikola Vucevic earned his way to a first career All-Star berth. As the sole star in an otherwise young Magic team filled with quality role players, Vucevic also led Orlando to a surprising playoff appearance. Although they lost to Kawhi Leonard and the Toronto Raptors in five games, there is a growing optimism around the Magic franchise.

Word around the league is that Vucevic has entered the radar of rival teams Boston Celtics and the Los Angeles Lakers. With the belief that Al Horford would bolt out the door in free agency growing stronger, the Celtics are now in need of a capable big man to complement the team’s excellent perimeter players like Jayson Tatum and Jaylen Brown. During a sit-down on the SiriusXM NBA Radio, Shams Charania of The Athletic talked about the Celtics’ plans of targeting Vucevic.

"The Celtics are going to prioritize getting a center, maybe someone like (Nikola) Vucevic. ... They're fully operating under the belief that those two guys (Kyrie and   Horford) are walking."

Another point to consider is the fact that the Celtics have recently traded away back-up defensive center Aron Baynes, leaving them with just unproven big men Robert Williams and Daniel Theis to man the frontcourt for Boston. Indeed, it’s not turning out to be the offseason that the Celtics were imagining a couple of year ago, but they still have the opportunity to re-establish themselves as an elite contender in the East by adding a premier offensive threat in Vucevic.

Aside from Boston, the Lakers have also lined themselves up in the Vucevic sweepstakes, per ESPN’s Adrian Wojnarowski.

"Orlando and Vucevic… there's a lot of motivation for those two sides to get a deal done. Vucevic has wanted to stay there. Both the Celtics and Lakers are potential landing spots for Vucevic if he doesn't get a deal done with the Magic."

Although Vucevic could be a perfect fit for the all-around skill set of LeBron James, it’s unclear how Lakers new head coach Frank Vogel would slot in Vucevic in a frontcourt line-up that already features superstar big man Anthony Davis and young budding star Kyle Kuzma. Pairing Vucevic and Davis on offense wouldn’t be that complicated as both All-Stars have a potent inside-outside scoring threat. However, that wouldn’t bode well on defense, especially if they are against a team employing small-ball line-ups all of the time.

Furthermore, it’s almost certain that Vucevic will demand a max contract from interested teams. Signing Vucevic to a max deal would not give the Lakers enough financial flexibility to sign a couple of quality perimeter players, something that the team should be in need right now. By trading away Lonzo Ball, Josh Hart and Brandon Ingram, the Lakers are left with only Alex Caruso and Isaac Bonga on the wing.

Still, it seems like the Lakers are really in the hunt for a frontcourt player to partner with Davis. ESPN’s Brian Windhorst mentions that the Lakers are also targeting Brook Lopez of the Milwaukee Bucks and DeAndre Jordan of the New York Knicks.

"The Lakers, I think, are sniffing around (Lopez). I think the Lakers need perimeter   players. I think they're going to have to use their money on perimeter players. I know DeAndre Jordan is a guy on the Lakers' radar that they're hoping they may able to get for relatively cheap because he wants to be back in L.A."

Lopez was a key cog of the Bucks’ run to the Eastern Conference Finals this year, revamping his game from low-post play to a perimeter-oriented one. His three-point shooting helped him perfectly play the role of a big man behind Giannis Antetokounmpo’s slashing and playmaking ability, while also establishing himself as a quality rim defender on the other end.

While Jordan is not the perimeter threat that Lopez is, his ability to run and catch lob passes for easy dunks will also be complementary to LeBron’s skills. His defense is still his trump card, but he has shown that he can also improve in the other facets of his game. Widely-known as a flunking free throw shooter, Jordan drastically increased his charity stripe percentage to 77% last season.

Things are now bordering on ugly conflicts between the Boston Celtics and their star point guard Kyrie Irving. Chemistry issues have marred the success of a powerhouse Celtics team last season, and there’s a greater chance that Kyrie will never don the green-and-white threads again in his career. During an appearance on the Brian Windhorst & The Hoop Collective podcast, ESPN’s Jackie MacMullan mentioned that Irving wasn’t really into living in Boston, and had issues with the front office

Reports have it that Irving could be well on his way to Brooklyn to play for the Nets. It is quite a 180-degree turn from the fact that the All-Star guard announced before last season began that he will indeed re-sign with the Celtics. But after a tumultuous start to the year that ultimately led to their failure to top the East, Irving rescinded on his announcement and hinted that he wasn’t really sure of making a decision just yet.

Recently, Celtics general manager Danny Ainge seemed like taking shots at Irving, who had some chemistry and leadership issues with his younger teammates, via NBC Sports Boston.

"I think it just makes life more enjoyable when everybody is humble, hardworking, and will play any role they have to help the team succeed. You do have to have a certain amount of talent to win in our league, as we all know, but good people makes coming to work more fun."

With Irving out of the picture, the Celtics can now look into re-signing backup point guard Terry Rozier. By trading away Aron Baynes and the fact that Al Horford has opted out of his player option, the Celtics now have enough cap space to surround Tatum and Brown with talent and experience.

Durant reportedly ‘pissed off’ at Warriors

The Golden State Warriors could be losing some ground on re-signing star forward Kevin Durant. Bleacher Report’s Ric Bucher wrote that Durant is unhappy about how Warriors officials decided to let him play in Game 5 against the Toronto Raptors, the unfortunate night when he ruptured his Achilles.

“The indication from several league sources is that Durant is not happy with the team, and the presumption is that it stems from whatever role Warriors officials   played in his decision to suit up (against Toronto).

Coach Steve Kerr says he was told Durant could not further injure himself by  playing, which obviously proved not to be true.”

Even before Durant sustained the Achilles injury that may keep him out for the totality of next season, there were already speculations that he has played his final season with the Warriors and will be greatly considering the Nets and the New York Knicks. Bleacher Report also reported that Durant and Irving have recently met twice to “discuss their desire to continue their careers on the same team.”

Still, Warriors veteran forward Andre Iguodala believes that both Durant and Klay Thompson will choose to stay in the Bay Area beyond this summer, per Eric Ting of the SFGate.

"I think they'll both be back with the Golden State Warriors. We're like brothers, we keep in contact, but regardless of any of that, if both did decide to leave they would  still be my brother. I would still keep in contact with them as much as possible. I'm   just wishing the best for those guys and they come back full strength."

With both superstars highly-believed to miss next season due to their respective major injuries, there is a possibility that other teams might be hesitant on pulling the trigger on acquiring KD and Klay. Not all players who sustained an Achilles or an ACL injury have come back to be the effective stars they were pre-injury. However, both Durant and Thompson don’t really depend on athleticism to be effective, so it would still be a great move to sign them and wait for them to be healthy again.