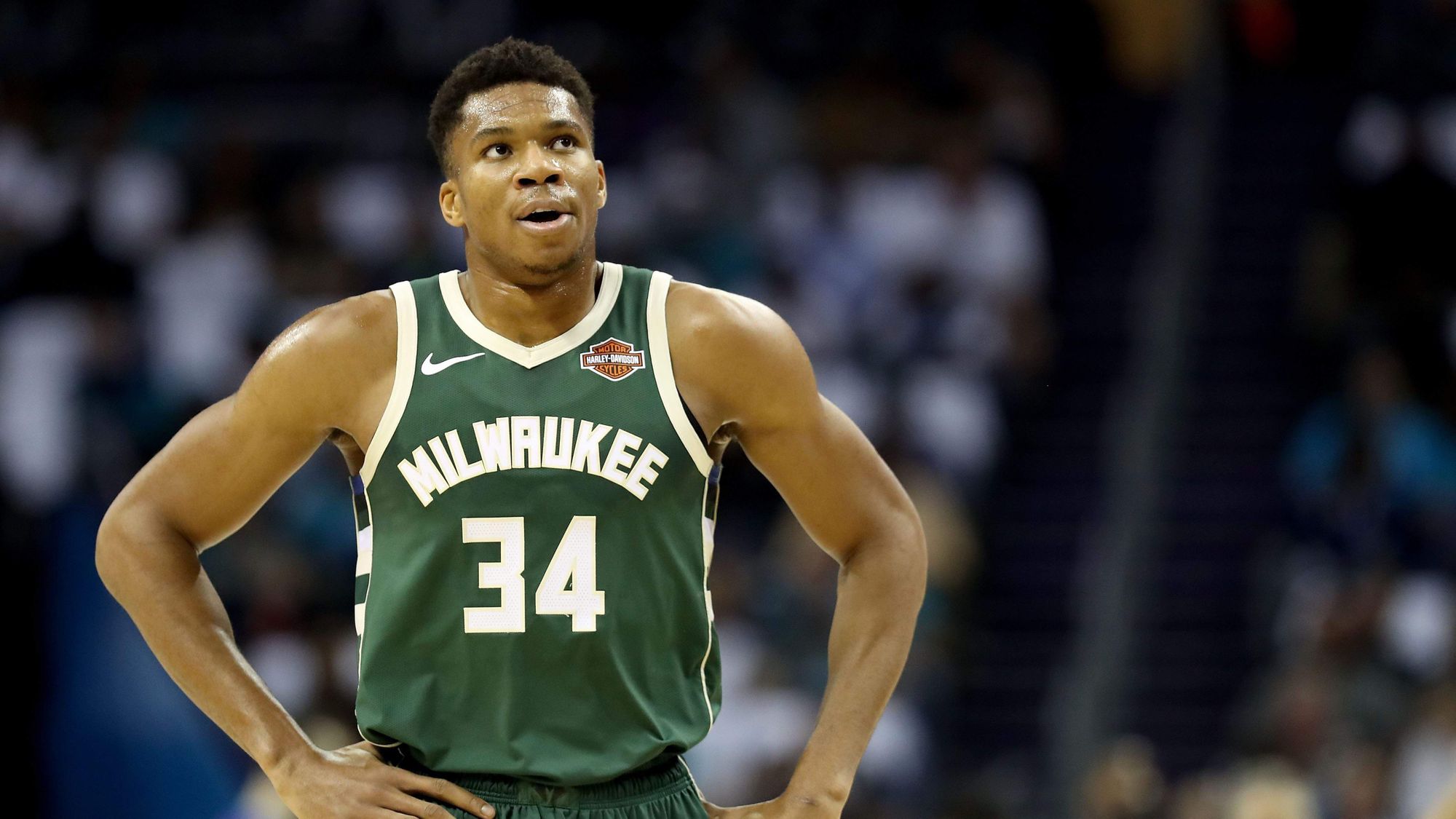 Kidd could be Lakers’ pitch to Giannis in 2021

Milwaukee Bucks Giannis Antetokounmpo has risen to become the face of the Eastern Conference this season, and he could very well be the top player in the league for the years to come. While it’s too early to speculate if the Greek Freak will stay in Milwaukee or take his talents somewhere else in 2021 (when he becomes an unrestricted free agent), it’s still interesting to imagine the possibility of him playing for another team. NewsDay’s Steve Popper recently reported that the Los Angeles Lakers are already looking forward to linking up with Giannis, and hired his former coach Jason Kidd to be part of the team’s coaching staff moving forward.

“It is just speculation right now, but one person asked me if I knew why Kidd was   there and as I guessed at his relationship with LeBron James or his ability to tutor Lonzo Ball, the person familiar with the Lakers process said something else: that Kidd was brought to Los Angeles to attract Giannis Antetokounmpo to the Lakers when he becomes a free agent in two years when the Bucks star could  become an unrestricted free agent.”

Antetokounmpo re-signed with the Bucks in 2016 and didn’t enter restricted free agency then. His extension deal of a four-year, $100 million contract is indeed a bargain for a top-tier superstar in this league, but look for his camp to seek out a super max contract when he becomes a free agent in 2021. The 24-year old transcendent star is averaging career-highs of 27.7 points, 12.5 rebounds, 5.9 assists, 1.2 steals and 1.3 blocks per contest this year, and has quickly become a prototype combo big man in today’s pace-and-space offense.

The only hiccup in Giannis’ skillset is his perimeter shooting, but once he gets accustomed with a more consistent shooting form, it’s easy to see why he is predicted by many to be the league’s best player in the near future.

Still, the best place to be for Giannis for the years to come would be to stay in Milwaukee, where he has the chance to build a dynasty and win the Larry O’Brien trophy for the city. While it’s true that Giannis was one of the Bucks players who expressed his disappointment when the front office fired Kidd last year, the team has gotten hold of a brilliant head coach in Mike Budenholzer, who has led the Bucks to the best record in the league.

In potential move to New York, Durant wants to be “the man”

It’s already been widely-documented that Kevin Durant is already a half-step out the doors of Golden State as a potential move to the New York Knicks could be his priority this offseason. Of course, KD will still do everything he can to win another chip with the Warriors, but the thought that New York will again have a Top 5 NBA player in their ranks is just too hard to ignore.

While there are a number of reason that could prompt his rumoured partnership with the Knicks, Popper also reports that Durant’s inclination towards playing for a lottery-headed team could be an effect of his relationship with Warriors head coach Steve Kerr, and his role for the defending champs.

“One front office executive said that Durant has been unhappy with the prodding from Steve Kerr and the feeling that he never can be — no matter how great he   performs and how many individual honours he compiles — the centerpiece of a team  that holds Steph Curry in the hearts of the franchise.

In New York, where no stars reside right now, Durant would certainly be the star attraction as well as the player who picks his teammates.”

Of course, winning won’t be the same if he indeed transfers to the Knicks, but he would definitely be adored by the playoff-hungry basketball fans of New York. Durant is posting incredible averages of 26.0 points, 6.4 rebounds, 5.9 assists and 1.1 blocks per game this season, while becoming a solid defensive anchor for the Warriors alongside Draymond Green. His arrival in New York will immediately signal a new era for the Knicks organization, following their short-tenured stint with Kristaps Porzingis.

Will the Raptors go all-in for Anthony Davis?

Another team has unofficially entered the Anthony Davis sweepstakes rumors. The Toronto Raptors, who are currently battling it out against the Milwaukee Bucks in the Eastern Conference Finals, could be a destination for the New Orleans Pelicans disgruntled All-Star, per Dan Favale of Bleacher Report.

“Going after Davis is a sales pitch to Leonard by itself. The Raptors can’t fork over the moon without a guarantee he’ll return, but the two parties can reach a mutual understanding: Get Davis, and Leonard stays put. Or Leonard could re-sign     independent of Toronto’s interest in Davis. The Raptors are that good, and team     president Masai Ujiri can view a potential Davis trade as a bonus pursuit of    Leonard’s commitment.”

Favale suggested a deal that would send Raptors young budding star Pascal Siakam to New Orleans, along with defensive forward OG Anunoby and Serge Ibaka. Siakam has been a revelation this year, especially in the playoffs where he is averaging 19.8 points and 7.0 rebounds, overtaking All-Star point guard Kyle Lowry for the second-best scorer title of the team. Anunoby is a young defensive ace who has the length and mobility to defend positions 1 through 5, while Ibaka is a veteran defensive anchor who has an expiring contract in 2020.

Right now, the Raptors isn’t the most famous destination for AD. His camp has always reiterated that the Boston Celtics, Los Angeles Lakers and the Knicks will be his preferred destinations, teams where he would sign a contract extension beyond 2020. Davis is norming averages of 25.9 points, 12.0 rebounds, 3.9 assists and 2.4 blocks per game this season. If Kawhi gives out a strong hint that he is opening the door for re-signing with Toronto, the Raptors front office would definitely give this scenario a serious consideration.

Rozier inclined on bolting out of Boston

It was just a year ago that Terry Rozier and the rest of the Boston Celtics young guns were a win away from the 2018 NBA Finals, and denying LeBron James and the Cleveland Cavaliers another shot at defeating the Warriors. They failed that year, but their failure to meet grand expectations for them this season was both surprising and disappointing. Rozier went from a key cog in that 2018 playoff run, to a back-up point guard this season, a scenario that obviously didn’t bode well for the 24-year old combo guard.

With him entering restricted free agency this summer, Rozier made his thoughts known during an appearance on Stephen A. Smith’s First Take.

“I’ve seen the way people treated me with the attitudes and it felt like I was just thrown all the way in the back seat. I talked to Brad multiple times, I talked to guys  multiple times. I just feel like… there’s just nothing nobody could do.

Numerous interested teams like the Phoenix Suns attempted to structure a trade for Rozier before the February trade deadline this season, but no deals panned out between the two camps. If Kyrie Irving suddenly decides to stay in Boston next season, it’s a sure thing that the Celtics can’t afford to pay Rozier a bigger contract, carving out a path for the 6-foot-1 spitfire guard to jump ship. However, if Kyrie leaves, there’s a strong chance that Rozier will get what he deserves – a starting spot in Stevens’ rotation.