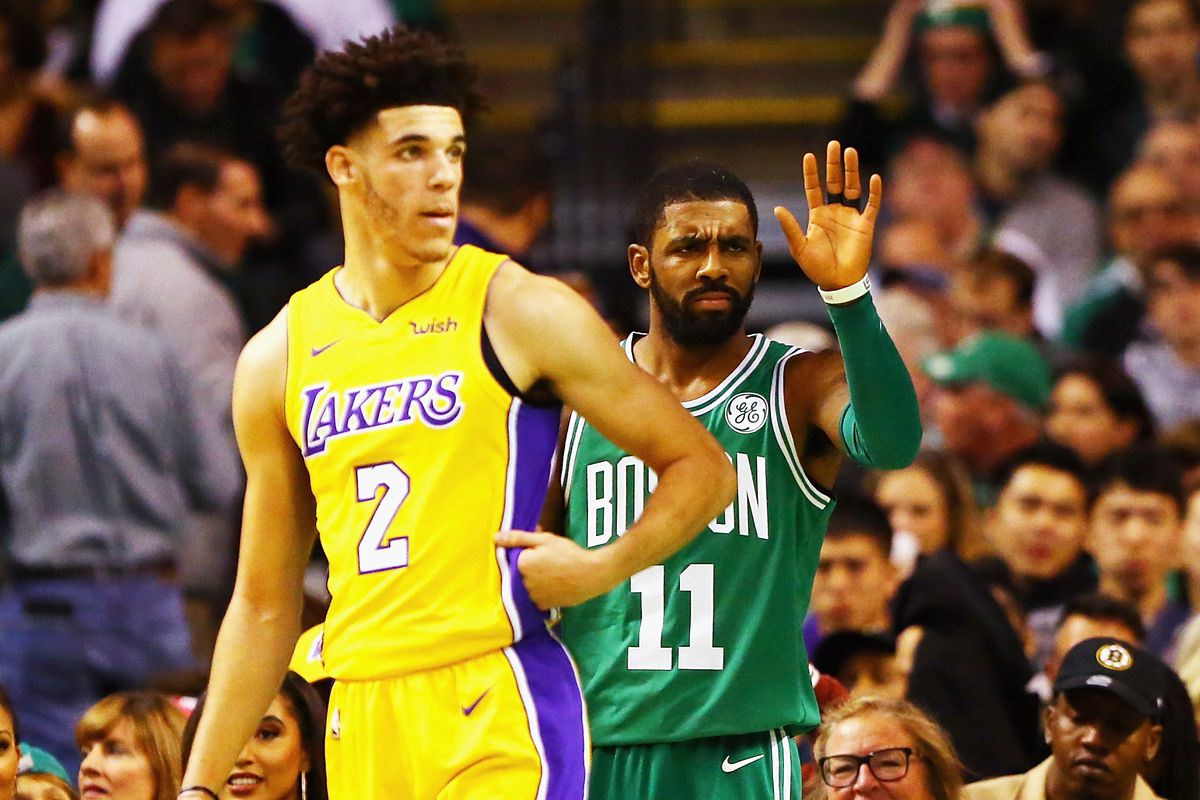 Is a LeBron-Kyrie reunion in the works in LA?

All-Star point guard Kyrie Irving left the shadows of LeBron James in Cleveland to become the main man for the Boston Celtics in 2017. But it turns out that the 2016 championship duo will reach full circle as Irving’s camp will reportedly ‘grant the Lakers an interview this offseason,’ per Stephen A. Smith of the ESPN.

If this rumor comes true in the offseason, it will be a confusing turn of events that go way back when Irving forced his way out of Cleveland as he didn’t want to play under the shadows of LeBron anymore. The 6-foot-3 spitfire guard has also been under the media fire this season for backtracking on his statement that he will stay in Boston beyond this year. But after a season filled with disappointment and internal conflicts with the Celtics, Irving then hinted to the media that he isn’t sure anymore regarding his decision in July.

This report from ESPN is just the next step for a series of patterns that could point out Kyrie’s reluctance to re-sign with the Celtics. Before the February trade deadline, Boston was one of the much-talked about destinations for New Orleans Pelicans star Anthony Davis. But nothing really happened between the two camps as Yahoo Sports’ Chris Haynes reported that Kyrie’s cloudy future with the Celtics botched any opportunity to trade for Davis.

“Regarding team preferences, Boston is not a top target for Davis, sources said. There’s a growing belief of uncertainty that Kyrie Irving will not re-sign with Boston, sources said, even though he vowed to do so at the beginning of the season.”

The Celtics are currently battling the Indiana Pacers in the first round of the 2019 playoffs. Should Boston go all the way to the Eastern Conference Finals, and even the chance to compete for the title, there would still be a great chance that Kyrie will re-sign with the green-and-white.

Lacob confident that Warriors can pitch excellently for a KD extension

Since buying the Golden State Warriors franchise in 2010, team owner Joe Lacob has transformed the Bay Area into an elite basketball city. The culture he helped built in the organization has been topnotch to say the least, and he’s confident that the Warriors can make a great pitch for All-Star Kevin Durant to stay beyond this season.

Lacob sat down with Tim Kawakami of The Athletic to reiterate the team’s position in the Durant sweepstakes.

“Look, we can pay him the most money. We have a great team. We have great   coaching. We have great fans. I don’t think anyone can match us, when you take     everything into consideration, if that’s the way you’re thinking about it.

And he has a chance to win — and let’s hope it goes well this year — a chance to  win more championships. I mean, it could be legendary. If he stays here … I don’t  know that you get this kind of opportunity very often. So I would hope that he thinks that and accepts that and decides he wants to stay."

While there are numerous reports saying that Durant is bound for the bright lights of New York, it’s true that staying in Golden State will give him the best opportunity to compete for the championship every year. It will take a mind-boggling pitch for any other NBA team to pry Durant away from the Warriors.

Still, KD says that nothing is written in stone just yet, and that he isn’t even thinking of his impending free agency, per Marc J. Spears of The Undefeated.

"Yo, just watch the game. Just focus on the game and stop nitpicking, because it is a beautiful game going on out there. What can I do right now? I can't sign a paper. I  got to do the most important thing, and that is play. And that is what we should be focusing on."

Durant isn’t the only Warrior who could leave in the offseason. All-Stars Klay Thompson and DeMarcus Cousins are also set to enter unrestricted free agency, leaving the Warriors front office with a lot of work to do after the playoff ends.

When the Los Angeles Lakers acquired LeBron James last year, it was expected that the storied franchise would attract more talent to join the team and create a modern version of the ‘Showtime Lakers.’ But superstars Paul George and Kawhi Leonard spurned them last summer, and Bill Oram of The Athletic believes that the trend will continue this offseason.

"The Lakers will now turn their attention to an offseason in which they are expected  to revisit trade options for Davis, while also chasing top targets in free agency – as unlikely as it is that Kawhi Leonard, Kevin Durant or Klay Thompson will come, according to a league source who believes the Lakers will be second or third on those players’ lists.”

If the Lakers again strike out in this summer’s stacked free agency – a batch that includes Durant, Leonard, Klay Thompson, and Kyrie Irving among many others – the franchise could hit the panic button as LeBron isn’t getting any younger anymore. The King is already 34 years old, and the window for the Lakers winning a championship with him is quickly closing.

Still, there are mid-tier free agents that the Lakers could chase. The likes of Khris Middleton, Jimmy Butler, DeMarcus Cousins and Tobias Harris fill up this class. Another path they could take is to re-visit the botched Anthony Davis trade, and see if the New Orleans Pelicans have changed their mind in dealing AD to Los Angeles.

Will Whiteside exercise his player option with the Heat?

With the Miami Heat lessening the playing minutes of defensive center Hassan Whiteside this season, the questioning of whether the 29-year old big man will exercise his $27.1 million player option next season has been gaining traction. Through Anthony Chiang and Barry Jackson of the Miami Herald, Whiteside addressed the issue and remains confident that he can still be an outstanding starting center.

“I’m definitely going to weigh my options. It’s definitely a decision I got to make and do the best for me. I feel like if I’m playing, I’m going to produce so it will take care of itself.”

Despite his double-double averages, Whiteside lost his spot in the starting five to sophomore big man Bam Adebayo. Bam’s ability to switch to multiple positions on defense has been the ultimate decider, given how the league has turned into a positionless, offense-powered game.

Still, Hassan emphasized that he is still effective in what he does, as evident in his stellar stats.

“I don’t think I’m a 20-minute guy. I average what, 20 minutes? So I think I can play more and I can do more. So I definitely think what I bring to the game is at a high level for my position. You know, I led the league in categories that you would want a big man to lead the league in. I feel like I can keep doing that.”

Despite averaging just 23.3 minutes per game this season, Whiteside is still putting up 12.3 points, 11.3 rebounds and 1.9 blocks each contest. While it’s highly-unlikely that Whiteside will forego his player option, the Heat could gauge other teams’ interest in trading for his expiring contract next season.

Players who exercised their player options for next season: