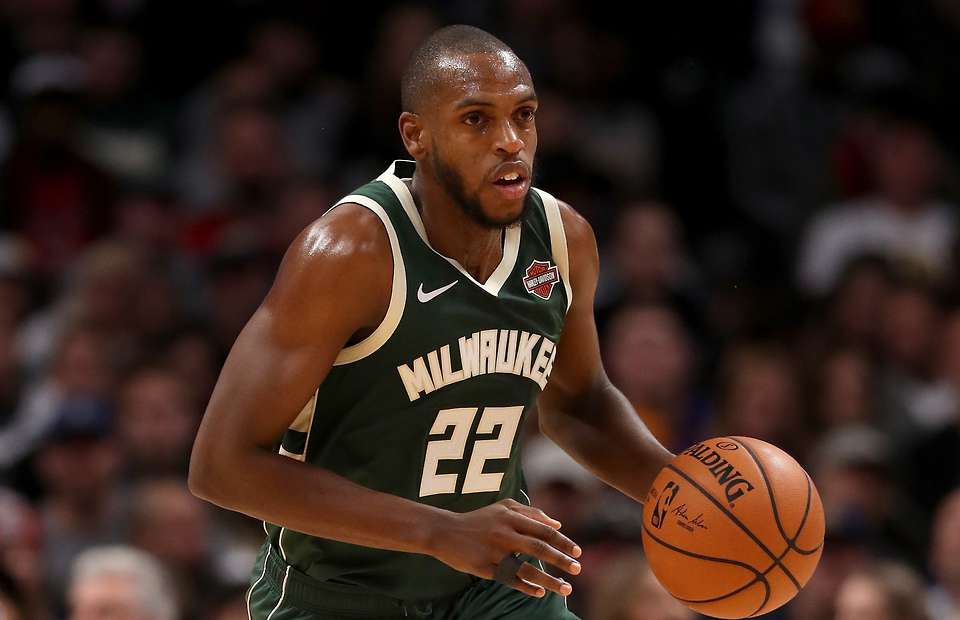 Dallas dreams big with thoughts of Middleton and Vucevic

When the Dallas Mavericks re-jigged their roster and traded for injured superstar Kristaps Porzingis, it was obvious at that point that the 2011 champion squad is aiming to be an elite contender starting next season. While it is long-reported that the team is interested in bringing in Kemba Walker in the offseason, the Mavs have also added Milwaukee Bucks All-Star forward Khris Middleton and Orlando Magic star center Nikola Vucevic to their free agency priority list.

Marc Stein of The New York Times has the inside scoop on Dallas’ interest with Middleton.

“But league sources say that the Mavericks intend to fling themselves into the chase for Khris Middleton and/or Kemba Walker with gusto in hopes that they have a shot at one of them. Wings with two-way ability figure to be another emphasis if Dallas is unsuccessful in pursuit of the big names.”

The 27-year old Middleton is still battling it out against the Boston Celtics in the playoffs. He will become an unrestricted free agent this summer, and it is expected that a lot of teams will be interested in acquiring the 6-foot-8 gunner. Middleton is averaging 18.3 points, 6.0 rebounds, and 4.3 assists per game for Milwaukee, earning himself the first All-Star berth of his career this season.

However, the Bucks remain the heavy favorites to re-sign Middleton in the offseason. Playing alongside Giannis Antetokounmpo, and the fact that he is continuing to blossom under Bucks head coach Mike Budenholzer should be clear indications that the team will retain their scorer beyond this season.

But alongside Walker and Middleton, it appears that Dallas is also aiming to pitch to Vucevic, per Josh Robbins of The Athletic. Vucevic has led the way for the Magic to overachieve this season, ending the long playoff drought of the franchise.

“It should be noted that Mavericks dispatched a high-ranking member of their front office to observe several post-trade deadline Magic games, ostensibly to scout Vucevic.”

Vucevic’s incredible inside-outside play as a big man will indeed be a perfect fit for Porzingis’ similar skill-set and Doncic’s passing brilliance. However, the Mark Cuban and the rest of the Mavericks front office have to get creative with the salary cap if they want to haul in the likes of Walker and Vucevic into the mix. Bryan Kalbroskly of HoopsHype writes that Dallas can still offer Vucevic a max deal.

“All of this essentially means they could still feasibly agree to terms with a free agent like Vucevic before offering Porzingis his massive contract. The most Vucevic can earn is a four-year max worth $140.6 million based on his service time with a hit of $32.7 million this offseason.”

With that in mind, Dallas can only offer one max contract this summer as they are already coming in full with their salary book, especially in the case that they lock up the services of Porzingis, who will be a restricted free agent this summer.

D’Angelo could seek out max contract with Nets

Fresh off from an All-Star year where he led the young Brooklyn Nets to a surprising playoff appearance, it could be highly-possible that D’Angelo Russell will demand a max contract from the Nets this summer, per Brian Lewis of The New York Post.

“The young guard has bought in, worked on his body and his defense, and become an All-Star, the first one the Nets have developed since Brook Lopez in 2012-13. But he’s got a $21.1 million cap hold, and could get a max offer from a point guard-hungry team. That would be $27 million, which league sources have intimated is what Russell wants. The Nets haven’t shown themselves to being convinced he’s worth that much, and could well let the market decide.”

The 23-year old Russell posted stellar numbers of 21.1 points, 7.0 assists and 3.9 rebounds per game this season on his way to his first All-Star appearance. It will be an interesting offseason for Russell as he is set to be a restricted free agent. He will be eligible to accept offer sheets from other teams, but it’s also widely-believed that Brooklyn will match just about any offers for the lefty scoring point guard.

Aside from Russell, the Nets are also expected to play big with the stacked free agency class. SNY’s Anthony Puccio says that Brooklyn’s surprisingly good season has “definitely helped their chances” in landing a top-tier free agent.

But now, following a playoff tussle in Year Three of the rebuild, Marks has put himself in a position where free agents might approach the Kiwi GM with their own way of saying, "Check, mate?"

“Several league sources have told SNY that top-tier free agents, including Kevin Durant, Kawhi Leonard and Tobias Harris, will at least consider Brooklyn this upcoming July when it's time to find their next home - if they decide to leave.”

But Puccio also reiterates that Brooklyn has to sacrifice something if they want to nab both Durant and Kawhi.

“This is the first time that Brooklyn has been mentioned as a major interest point for Kawhi. The Brooklyn Nets currently have around $60 million in cap space. If they  were able to trade Allen Crabbe‘s remaining $18 million in salary, let D’Angelo Russell walk, and renounce their free agents, the team would have enough money to sign both major players.”

While Crabbe’s bloated contract is easier to let go (though harder to find a trade partner with), Russell’s situation is more difficult to deal with. Another scenario that is possible with the Nets this summer is that they retain Russell, improve his skill set through a rigid player development program, and sign one big name from the FA class. If the Nets could further advance the development of young players like Caris LeVert, Spencer Dinwiddie and Jarrett Allen, the Nets may have struck gold this year.

After five-time All-Star shooting guard Klay Thompson finish his duties with the Golden State Warriors this season, the 29-year old shooter will become an unrestricted free agent, and rumors for him to sign with the Lakers have been everywhere. Still, Klay’s father, Mychal, a former Laker, doesn’t think that his son will be playing with the Lakeshow anytime soon.

“That doesn’t mean he doesn’t get bugged around his neighborhood, where strangers approach him in the grocery store or at the coffee shop and ask if Klay is coming back to Los Angeles to team up with LeBron James and lead the franchise back into the postseason.”

“I can’t go anywhere,” Mychal said. “Ultimately it’s a compliment: Lakers fans want him to play here. But I don’t think that way. I think the Lakers are gonna be fine. I don’t see Klay coming out here as a savior.”

Klay, who is averaging 21.5 points, 3.8 rebounds, 2.4 assists and 1.1 steals per game this year, has grown to become one of the most sought-after two-way players in the league. The 6-foot-7 gunner is also just 28 years old, and still has several more years in his prime. No matter what happens with the Warriors this postseason, the defending champs will still be the clear-cut frontrunners for the services of Thompson beyond this year.