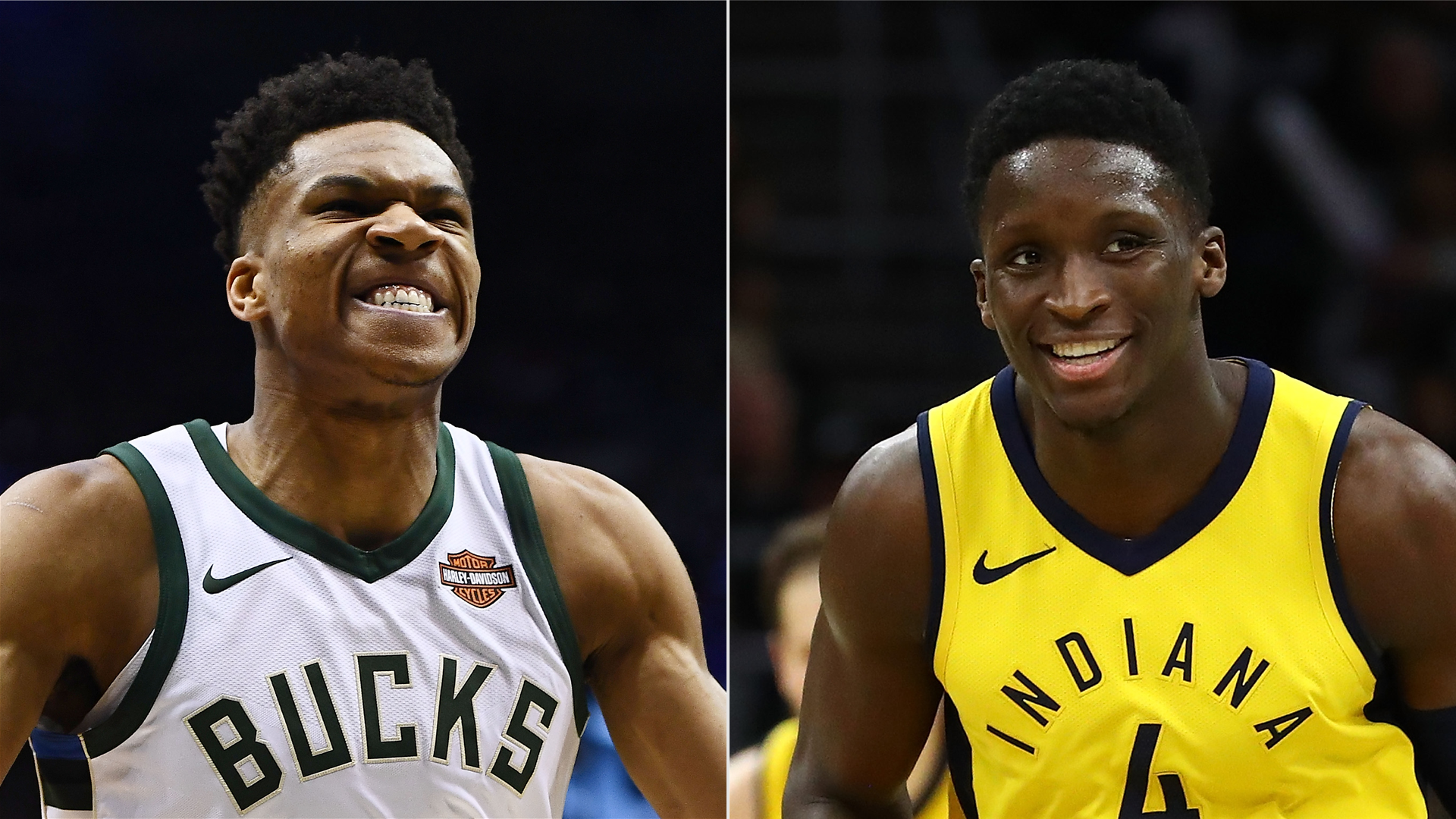 Heat has eyes on both Antetokounmpo and Oladipo

The Miami Heat has long been a hotbed for superstars and top-tier All-Stars. The great weather at the South Beach, combined with the Heat’s highly-regarded winning culture have attracted lots of talent especially in free agency. Even though they were not in a great position to nab a superstar talent last offseason, the team still successfully acquired two-way star Jimmy Butler to install him as the new franchise cornerstone following the retirement of the legendary Dwyane Wade.

But Pat Riley and the Heat front office are never satisfied by a single accomplishment. Barry Jackson of the Miami Herald recently reported that the organization has already set their sights on a couple of 2021 prized free agents: Milwaukee Bucks star and reigning MVP Giannis Antetokounmpo as well as Indiana Pacers All-Star guard Victor Oladipo.

“But if they do, the Heat assuredly would due diligence on both for two reasons: 1)Both remain highly productive and 2) Neither has a contract that runs beyond the summer of 2021, which is critical because Miami wants to preserve max cap space that summer for a run at Giannis Antetokounmpo or, secondarily, a few other targets including Victor Oladipo.”

The 2021 free agency class could be even more stacked than last summer’s already strong batch. There’s no doubt that Giannis is the top prize of that class, considering that he will only be 26 years old by that time and is just entering the very peak of his career. Kawhi Leonard, Paul George, LeBron James, Jrue Holiday and Blake Griffin could enter free agency if they opt out of their contracts. Other top-tier names include CJ McCollum, Rudy Gobert, LaMarcus Aldridge, Chris Paul, Gordon Hayward and of course, Oladipo.

With the Heat’s salary book opening up in 2021, it’s almost a surefire thing that they will acquire one of those names. They have arguably one of the best young cores in the league. Bam Adebayo is slowly rising up the ranks of the most versatile centers we have today, and rookies Tyler Herro and Kendrick Nunn are outperforming their more heralded peers. Then of course, there is the presence of Butler, who has proven that he can be a better player when surrounded by strong-minded teammates. The 30-year old star is posting a career-high in assists with 6.6 dimes per contest, while also norming a career-best in defense with 2.6 steals.

More importantly, Butler isn’t really one of those All-Stars who needs a high volume of shots to put his imprint on a win. He isn’t even averaging the highest field goal attempts for the team. Nunn tops that department with 13.8 attempts per game, and Butler and Justise Winslow trail behind with 12.6 shots apiece. Butler does a bit of everything on offense, while his trump card still lies on how he could be a solid anchor on the defensive end. This is a squad ripe for playoff contention, and the arrival of a player like Giannis or even Oladipo should solidify their status as an elite championship contender.

Pelicans all set to keep Ingram for years to come

The New Orleans Pelicans let go of an opportunity to extend Brandon Ingram’s contract when the 22-year old scoring forward became eligible for a rookie scale max extension last summer. But the organization is not bent on letting that golden opportunity just pass by again. Marc J. Spears of The Undefeated reported that Griffin told them that there’s no chance that the Pelicans will let Ingram walk on his impending restricted free agency in 2020.

“At full strength, the Pelicans have a talented mix of veteran players and young prospects. Jrue Holiday is under contract potentially through the 2021-22 season. JJ Redick signed a two-year deal last summer. Brandon Ingram, 22, is a restricted free agent next summer, but Griffin told The Undefeated that the Pelicans have every intention of keeping him long term.”

Although the Pelicans are struggling to rack up wins as injuries to their key cogs are piling up this season, Ingram has been a very bright spot for the team. He is leading them in scoring with 25.9 points per contest, a seven-point jump from his average while playing for the Los Angeles Lakers last season. The Duke University product is also netting career-highs in rebounds, assists and blocks, while shooting a stellar 41% clip from three-point territory. Ingram’s career year is really stunning given the fact that a cloud of uncertainty hovered on his basketball career following a bout with blood clots just last season.

Ingram, the second overall pick of the 2016 NBA Draft, has always been overshadowed by that year’s top overall pick, Ben Simmons of the Philadelphia 76ers. Simmons’ versatile skillset has been compared to the likes of Magic Johnson and LeBron James. At 6-foot-10, he is a natural point guard on the floor, possessing both the mobility, court vision and ballhandling intended for smaller point guards.

But Ingram is slowly changing that tune. He has always been a scoring machine especially when he averaged 16.1 points in his sophomore year. His shooting form is pure art, and his off-the-dribble scoring ability is first-rate. But his leadership on both ends of the floor has blossomed this season. Ingram told Dan Woike of the Los Angeles Times that he focuses his energy on instilling his leadership on his new teammates.

“I don’t think I’ve been a great leader. I’ve been a leader on offense. For me to be a leader, I’ve got to be really, really good on both ends. I’ve got to give maximum effort at all times. I’ve been doing an OK job, but I haven’t given maximum effort on every single play. Once I do that and figure out a way to make everyone else better and confident on the basketball floor, than I’ll feel good in calling myself a leader.”

With his much-improved numbers and impact on the defensive end, Ingram may even find himself playing in the All-Star game this February. Even when prized rookie Zion Williamson comes back from his knee injury, there’s no doubt that the Pelicans will still rely on Ingram to provide them with buckets.

When Carmelo Anthony was signed by the Portland Trail Blazers a couple of weeks ago, the free agency spotlight switched to veteran scoring guard Jamal Crawford. Crawford, who put up 51 points for the Phoenix Suns in the last game of the 2018-19 regular season, is still currently without a team. At 39 years old, it’s indeed difficult for a player at his age to have a consistent role for an NBA team. But Crawford isn’t just a regular 39-year old vet. He is a born scorer, and he can come off the bench and log in quality minutes for any team.

In an interview with NBA.com’s Shaun Powell, Crawford himself is confused as to why not a single team has called in to acquire his services.

“I know I can play and I would think my reputation is still solid. It’s baffling to me…

Physically, I feel better than I did last season,” he said. “I’m able to get my body together. My skill set is sharp. I feel that I’m good. My mindset is be patient and hopefully something good comes about it. I’ll be ready for the opportunity.”

Among the team rumoured to be of interest for Crawford are the Lakers and the Sixers. The Lakers are already filled up to the brim in their guard depth, but the Sixers really need scoring and long-range marksmanship help this season. JJ Redick left them to sign with the Pelicans, and their pursuit of sharpshooter Kyle Korver failed when the vet chose to play for the Milwaukee Bucks instead.