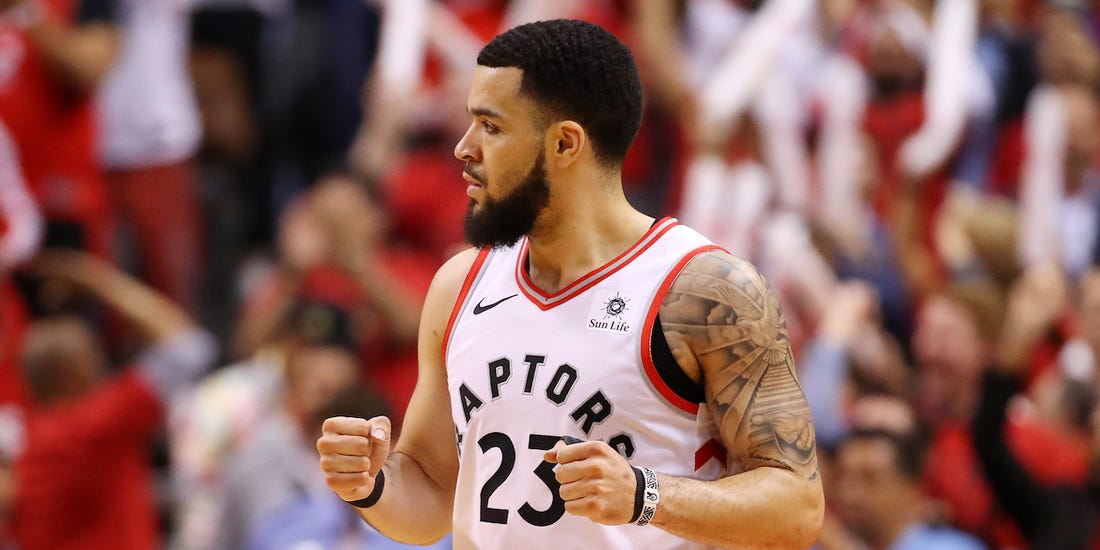 With the impossible notion that Anthony Davis will not re-sign with the Western Conference frontrunners Los Angeles Lakers, Raptors scoring guard Fred VanVleet is arguably the top unrestricted free agent in this year’s class. After going undrafted in the 2016 NBA Draft, the 2019 champion guard has grown into a regular starter and a borderline star for the Raptors. His undersized partnership with veteran star point guard Kyle Lowry is working at all levels, mainly because both playmakers play big on defense.

Signs are pointing towards a re-signing coup with the Raptors, but it is still likely that the team has to let him go. Toronto is rumoured to be bracing for an all-in pitch to land Giannis Antetokounmpo in 2021, and they already gave first-time All-Star Pascal Siakam a lucrative contract extension last offseason. There will be tons of teams who will come after the 26-year old rising star, and Dana Gauruder of the Detroit Free Press points out that the Pistons could be one of those teams.

“He obviously has a history with Pistons coach Dwane Casey, who coached VanVleet during his first two pro seasons. Casey wants multiple ball-handlers on the floor, which would make VanVleet a great fit alongside Derrick Rose, Bruce Brown and Luke Kennard.

VanVleet made $9.3 million contract in 2019-20; he'll get more than that in free agency. Whether the Pistons make a bid might depend on whether they draft a point guard.”

With the scoring, defense, and playmaking that he brings to the table, money will be there for VanVleet no matter where he lands.

It has been a rough season for Conley, and you can see it on the dip in his on-court production this season. His scoring output is his lowest since the 2011-12 season, and his overall efficiency and impact have decreased in his first year at Salt Lake City. Did the 32-year old veteran playmaker enter the twilight stages of his productive career this year? He has had a lot of mileage during his 12-year stint with the Memphis Grizzlies, although he has been always durable with the exception of the 2017-18 season.

With that said, Conley has a $34 million player option to cash in if he decides not to enter free agency this offseason. It will be indeed a smart move not just for him, but for the Jazz as well. Utah may have struggled early into this year, but they have recently found their groove and Conley has put up good games in the second half of the season. In an interview through the NBA’s official Twitter page, Conley also emphasized that he loves playing for the Jazz and its supportive fan base. (h/t TalkBasket.net’s Alexandros Tsakos)

“Salt Lake has been unbelievable to me. My family loves it. Obviously some of the best fans in the world. Truly a different experience for us, I think being in the mountains and altitude has been an adjustment. But, everywhere you go everyone is a diehard Jazz fan and truly cares about you and your family.”

It’s hard to imagine the vet turning down such amount of money, especially considering that he cannot again garner another contract that lucrative.

Out of all the good point guards included in this list, the 33-year old Dragic could be the safest bet for your dollars. Coming off a down year last season, the lefty scoring guard has embraced his new role as the Heat’s second unit leader and he has thrived in it. Dragic is back to his usual efficient scoring production, and his savvy and experience will be solid contributions for any contending team.

With the way that the Heat has been a pleasure to watch this season, there’s no denying that staying in South Beach will be Goran’s greatest desire in free agency. He could sign a short-term deal with them so as not to cripple the Heat’s salary books. However, team president Pat Riley said that the league’s clouded future makes it hard to predict how they will approach their personnel movement decisions. (h/t Heat Nation)

“You have to remember we have six or seven free agents ourselves, but we also have nine other players that are under contract and guys that we really like, so we’ll continue to sort of just create possibilities, what can possibly happen.

We don’t know what the cap number really is going to be, but we feel confident that the cupboard is full, and what I mean by full is that we do have a lot of very good young players that have proven that they can play at a real high level in this game and they’re fearless, and, yes, we’re very concerned about our pending free agents. We like all of our players and so when we get to that time we’ll know what direction we want to go in.”

Riley and his people may have several decisions to make regarding their impending free agents, but the team should be able to retain Dragic if they want to continue being this good in the Eastern Conference.

Augustin may be going through a drastic dip in his shooting efficiency this year, but his long-range shooting and above average playmaking should garner him the interest of some contenders. The 5-foot-11 guard may be undersized and not a shot creator, but he is a solid spot-up shooter and he makes the right decisions on the floor.

Most importantly, his teammates all love and respect him. He has been widely-criticized for his below average performance this season, but Magic star big man Nikola Vucevic isn’t having anything of it. As per NBA.com’s John Denton, Vucevic says that Augustin’s professionalism to accept a bench role for the team is something that they greatly respect.

As a pure Magic fan, you don’t say things like that and, honestly it pissed me off because I know how much D.J. cares, how much of a pro he is and how much he’s given up. To accept a lesser role when he had a great year (while) starting last year, it says a lot about him. I saw that and it was really disappointing to see fans write things like that about somebody who is a true pro and somebody who has been in this league for so long and knowing he just came back from an injury. You know that he tried, but things weren’t working for him and it happens. Everybody goes through a little stretch like that.’’

The Magic could still try to retain Augustin in the offseason, but the 32-year old point guard may want to chase a coveted championship trophy with another team who has a better-equipped roster for a deep playoff run.

Ever since being traded to the Detroit Pistons in 2014, Jackson has been the main point guard for his team. He starts every game, and gets all the shots that he wants to put up. But the 30-year old is not chasing individual accolades and numbers anymore. When he requested for a buy-out of his contract with the Pistons, it came with the mindset that he is now aiming for more team success out there.

Jackson’s shot-making is highly regarded in the league, and that was the reason why the Clippers signed him after the Pistons buyout. His field goal attempts drastically went down to only 6.6 from having 14.1 attempts in Detroit. That is a big sacrifice that Jackson is making, but he has been an efficient scorer for the Clippers.

In the nine games that he played for the Clippers, the 6-foot-3 combo guard is making a stellar 53% of his total field goals, including a 45% clip from the three-point line. If Jackson can continue playing consistently and efficiently in his newfound bench role, he should be able to garner offers from tons of elite contenders.