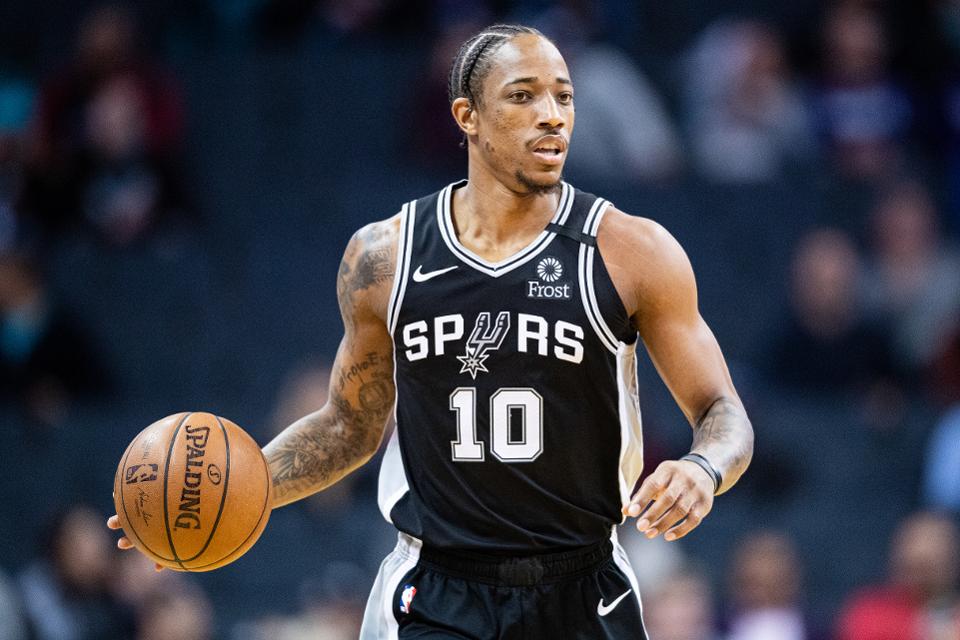 DeRozan may now be in his thirties already, but the four-time All-Star shooting guard is still a walking 20-point machine every night. Along with this scoring, he also amped up his playmaking under Spurs head coach Gregg Popovich. Moreover, DeRozan is also putting up a career-high 53% clip from the field, a stellar percentage for a perimeter player who makes a living on off-dribble mid-range jumpers.

However, DeRozan’s individual brilliance has not translated into team success at San Antonio this season. With a lowly record of 27 wins against 36 defeats, the Spurs are on the brink of coming short of a playoff spot after 22 long years. The team chemistry that has always defined Spurs basketball is just not there this year, and the star partnership of DeRozan and LaMarcus Aldridge is obviously not working.

With a player option coming up on the final year of his contract, DeRozan has some important thinking to do. It is a lucrative money amounting to $27 million, but if his performance declines next season, teams won’t be risking committing a long-term contract to him anymore. Furthermore, Jabari Young of CNBC told ESPN San Antonio that the former Toronto Raptors shooting guard is already contemplating moving out of the Spurs camp if both parties don’t agree on an extension.

“Listen, I don’t have to sugarcoat anything. DeMar DeRozan is not happy in San Antonio, OK? The offense is not running as smoothly as one should think with a guy like him in the lineup, and there are problems are there, right? And so you have to decide if you’re going to take that money of if you’re going to come back to a situation that’s just not suitable. I mean, it didn’t work. They got the deal done. It’s over. I mean, the experiment is not working.”

If Popovich decides to hang up the coat and tie next season and focuses more on his coaching stint with Team USA, we may see the Spurs franchise finally go for a rebuilding stage to restart the direction they are heading to.

Fournier has always been a dependable scorer throughout his career, and there’s no doubt that he will garner tons of attention should he decide to enter the free agency market. The sweet-shooting swingman still has a $17 million player option left in his contract, so there is a very high possibility that he is inclined on cashing in and staying in Orlando for one more year.

Josh Robbins of The Athletic also put it out that the current situation of the league could cripple the teams’ salary cap space.

“Danny also wrote (correctly, in my opinion) that Fournier’s agent, Bouna Ndiaye, “may have the single most important job of intelligence gathering this offseason because his client has a lot of money on the line, and the league’s attempted clampdown on tampering may have an effect on what front offices are willing to convey about their intentions.”

In other words, it would be to Fournier’s extreme benefit if his camp can determine  whether any of the teams with cap space this summer intend to make solid offers. If there is not much interest, then it would make sense for Fournier to exercise his player option for 2020-21, hope for another strong season and then hit unrestricted free agency in July 2021.”

In short, Fournier and his people will find it very difficult to negotiate a deal that could land them a number higher than $17 million. That is very unfortunate for the 28-year old Fournier as he is riding a career-best season and has just arguably entered the peak of his career. If this COVID-19 outbreak did not happen and the NBA is on its normal operations, it is without a doubt that Fournier could have declined his player options to take his chances in the market.

In the 14 games he played for the Wolves since being traded away by the Denver Nuggets, Beasley has been a different beast. He is shooting a spectacular 43% clip from beyond the arc, while norming 20.7 points per game. Known more as a defensive guy in Denver, Beasley has unleashed his scoring potential thanks to more playing time in Minnesota.

The 6-foot-4 shooting guard will become a restricted free agent in the offseason, and it is safe to say that this will be a no-brainer decision for the Wolves front office. Beasley is young at 23, and he fits in perfectly with the timeline of their two All-Stars, D’Angelo Russell and Karl-Anthony Towns.

Team president of basketball operations Gersson Rosas expressed in joy in seeing Beasley grow in Minnesota, and hinted that the organization is bent on re-signing the young swingman, as per Dane Moore of the Zone Coverage.

“Malik has played in the league for four years. We’re big fans of Malik. We paid a very, very strong premium to get him here in Minnesota. But we’re excited. I think the small sample size we saw with him with the Minnesota Timberwolves showed his potential.

We’ve got a young group of guys that are around the ages of 22 to 26. His work ethic; his dedication; the taste of success in Denver; and now, he’s got a bigger platform to impact the winning at a higher level. He’s got a great couple of teammates in D’Angelo and KAT that complement each other well. So we’re excited. We’re excited about what the future holds.”

Beasley will certainly have multiple offer sheets ready for him in the offseason, but it is hard to imagine that the Wolves front office will just let him walk away.

Since coming to Salt Lake City after a mid-season trade, Clarkson has been the Jazz’ direly-needed scoring punch off the bench. The 6-foot-5 combo guard can score from anywhere, and he knows that it his specified role in Utah. It is no coincidence that his arrival turned the tables around for the Jazz, who were struggling to rack up wins early into the season.

Clarkson’s contract is also expiring after this year. Tony Jones of The Athletic emphasized that both parties want to stay together, and it is the consistent playing time that will eventually help the Jazz retain their spitfire gunner.

“Here’s what we know: The Jazz want to keep Clarkson, and they have his Bird rights, which means they can offer him an extra year. Much of the league has no salary cap space, and the teams who do have cap space aren’t currently winning situations. So, the Jazz can offer money, years and a defined role to Clarkson in the prime of his career.

Clarkson was one of the better sixth men in the league this season. He averaged 15.6  points per game. He shot 36 percent from 3-point range. He showed a terrific ability to break people down off the dribble. He was a very good finisher once he got to the paint. Off the floor he fit seamlessly into the Jazz’ culture. If you add all of that up, chances seem good that the Jazz keep Clarkson in the fold. He will be priority, and having his bird rights and the ability to go beyond the salary cap to try and keep him is an advantage.”

Clarkson is only turning 28 this year, so he is still at the peak of his career. The Filipino-American shooting guard is a two-way player who can put up the points across the board, while also exerting effort on the defensive end. He should be a solid catch for any team, but it will indeed take the world to pry him away from the Jazz.