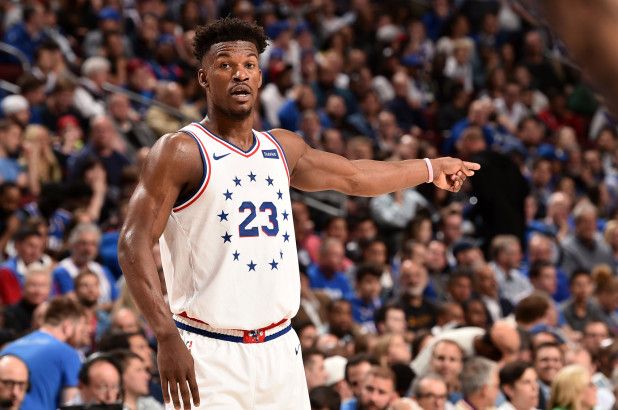 In the midst of the chaos surrounding their two star playmakers, reports have it that the Houston Rockets have now renewed their interest on Philadelphia 76ers two-way star Jimmy Butler, per Brian T. Smith of the Houston Chronicle.

“Rockets are expected to pursue Butler and be aggressive in their pursuit. Seen as  an ideal fit on both ends of court, and in helping push Rockets to the top of the wide- open West.”

It could be recalled that the Rockets actually went after the services of Butler last season, but failed in doing so. The Rockets offered a bevy of first-round picks and a couple more role players to the Minnesota Timberwolves, but the Wolves didn’t deem it enough for Butler’s All-Star credentials. Instead, they rejected Houston’s offer and shipped Butler to Philadelphia for Robert Covington and Dario Saric.

Butler, who posted averages of 18.7 points, 5.3 rebounds and 4.0 assists last season, is already 29 years old and has one thing in mind for his free agency decision: the best chance to chase the coveted championship ring. While he had issues with Sixers head coach Brett Brown’s offensive system during his first few games with the team, Butler has shown us that he can still be effective even while playing with a teammate who handles the ball most of the time like Philly point guard Ben Simmons.

With the Rockets’ ultimate goal of reaching the NBA Finals not realized again this year, the team’s front office is now losing patience. With the 34-year old Chris Paul already declining and Harden turning 30 before next season begins, the Rockets’ championship window is slowly closing. Furthermore, there’s a high possibility that the Warriors will be without injured stars Kevin Durant and Klay Thompson next year so the Western Conference is now open for a new top team.

Among the teams expected to also pursue Butler are the Los Angeles Lakers, the Brooklyn Nets, the New York Knicks and of course, the Sixers.

Rumors of Kyrie Irving already heading to the Brooklyn Nets shook the basketball world last week. However, it turns out that the Nets are now hesitant to bring in the Celtics spitfire guard especially if they can’t acquire Golden State Warriors star forward Kevin Durant in the summer. Brian Lewis of the New York Post has the inside scoop on this potential Kyrie-Nets partnership.

“The Post has confirmed Brooklyn might have qualms about signing the enigmatic   Irving if he isn’t bringing the injured Durant with him.

Other teams had already backed off of pursuing Irving with similar concerns over   the way things went awry in Boston. If the Nets do the same, it would mean keeping Russell, who is a younger and cheaper option as a restricted free agent.”

Durant sustained a major Achilles injury during Game 5 of the Warriors’ Finals match-up against the Toronto Raptors. Injuries like that would require a recovery period of almost a year so it’s expected around the league that Durant will miss next season. While it is rumoured that the New York Knicks are still in the play for offering a max deal to Durant in the summer, the superstar’s injury has already affected the offseason plans of many other teams.

With that said, Brooklyn’s initial plans of pairing Kyrie and KD would not happen any time soon. Many pundits believe that if the Nets bring in Kyrie, it’s almost a sure thing that D’Angelo Russell will sign elsewhere. Russell was the key cog of the Nets’ successful run last year, and made his way to a first All-Star appearance.

Lewis also mentioned how the dominoes will fall if the Nets indeed sign Irving this summer.

“Irving could command a four-year, $141 million deal that starts at $32 million. Durant would get a four-year, $164 million contract that would start at $38 million next season, one that would essentially be a redshirt year. It would also necessitate   more moves (like trading Spencer Dinwiddie, Joe Harris or Taurean Prince) to afford Durant and Irving.”

Pursuing Irving and Durant would basically force the Nets to rebuild the roster. On the other hand, re-signing Russell would allow them to retain the team’s core and put them in position to sign another max free agent while also having enough financial flexibility to acquire another mid-tier quality player. Aside from max players like Jimmy Butler and Kawhi Leonard, possible All-Star caliber players that the Nets could pursue are Sixers combo forward Tobias Harris and Celtics versatile center Al Horford. Horford recently declined his player option with Boston, making him an unrestricted free agent in the market. He can give the Nets another threat on offense, while also providing his excellent defensive presence on the other end.

Before the Los Angeles Clippers shipped him to the Philadelphia 76ers before the February trade deadline, the Clips tried to extend Tobias Harris’ contract with an $80 million extension offer before last season began. Harris apparently turned it down, and now he gives us the reason behind that decision, per Shlomo Sprung of the Forbes.

“One of the reasons why I turned down the extension was to be able to bet on  yourself. But also be able to have the opportunity to control whatever’s to come. Obviously I’ve been traded around, but at the same time I know my game, I know what I bring to the table and I know what I’m looking for as a player.”

Harris went on to prove that he is much more worth than that offer, putting up career-high numbers of 20.0 points and 7.9 boards per game, along with 2.8 assists and a stellar 40% clip from beyond the arc. He has now established himself as a borderline All-Star in a league full of supremely-talented superstars, and has become a prototype stretch forward in today’s pace-and-space offense.

Brian Lewis of the New York Post also wrote a column on Harris, including the forward’s comments on what team attributes he is looking for in terms of his free agency decision.

“A great organization. Obviously winning’s important for me, style of play was  important, and just putting myself in the right opportunity to continue to improve   my game and get better year in and year out.

I know the work that I put in the offseason correlates to the season. So I know  what’s  going to be expected of me as a player, and just being in the right situation to excel at  that.”

The 26-year old combo forward started his career with the Milwaukee Bucks after being traded by the Charlotte Hornets, who selected him with the 19thpick in the 2011 NBA Draft. Harris averaged just 5.0 points during his rookie year, but steadily worked his way to playing consistent minutes in the next few years. Since then, he has played for the Orlando Magic, the Detroit Pistons, the Clippers and most recently, the Sixers.

Kawhi still focused on playing for the Clippers

While winning the championship has certainly helped the Toronto Raptors’ case of pitching for Kawhi Leonard to stay, it might still be the Clippers’ race to lose. ESPN’s Adrian Wojnarowski reported that the Clippers still have the inside advantage in the Kawhi sweepstakes.

"The reality is Kawhi Leonard's focus is on Los Angeles, but it's the Clippers not the   Lakers. No. 1, they [Lakers] don't have the money to sign him. And two, the idea of   him being a third wheel on a superteam. That has not been Kawhi's M.O. The Clippers are poised to be able to lure him from Toronto. This would be a   Raptors/Clippers fight. He may take meetings with more teams, but it's not even   certain that he'd take a meeting with the Lakers right now."

With an all-time performance in this year’s playoffs, Kawhi has created a name for himself in the argument of being a Top 3 player in the league right now. Once a one-dimensional defensive player during his early years, Leonard has worked on his offensive skills set and has been unstoppable on that end to the point that opponents have been scheming on double-teaming him at every turn.

Kawhi has long been aspiring of playing at Los Angeles, his home town. Rumors that the star forward is already sure of heading to the Clippers surfaced during the early part of the season until the regular season ended. But the Raptors’ unprecedented success in the postseason tilted the balance a bit with reports saying that there’s a chance that Leonard could sign a short-term deal with the Raptors.