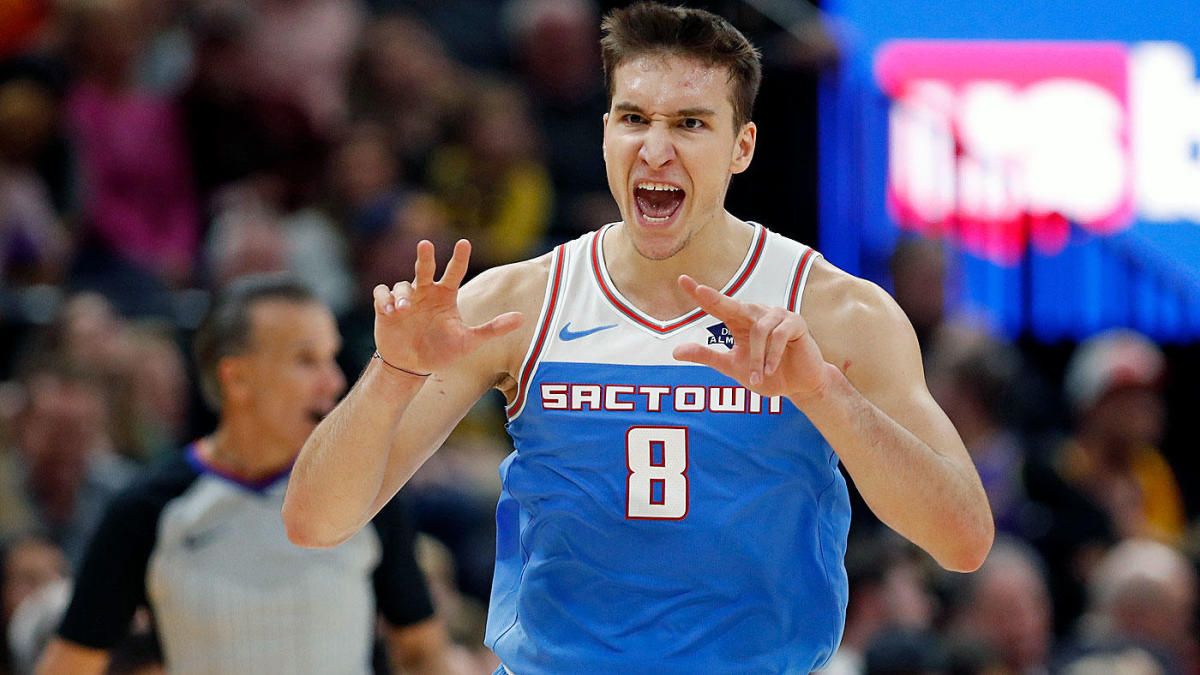 Bogdan Bogdanovic may not have put up a breakthrough season as many people expected, but his team is still bent on re-signing him for the long run. As per The Athletic’s Jason Jones, the Sacramento Kings front office has made the potential Bogdanovic re-signing as the topmost priority of their goals this offseason. The 27-year old Serbian shooting guard will enter restricted free agency, and it is highly-expected that a number of teams will throw lucrative offer sheets to nab the young budding star.

“Re-signing restricted free agent Bogdan Bogdanovic will be the top priority. The  Kings intend to match any offer sheet from another team, should Bogdanovic sign one.

If Bogdanovic is taken care of, look for the Kings to seek out help defensively, especially on the wing. The Kings do not have enough size on the perimeter and could use some players in the 6-foot-8 range who can play either forward spot.”

The Kings coaching staff and management have been in a tight spot all season long as they figure out how to handle the future of their backcourt stars. Buddy Hield, their second leading scorer, has been voicing out his frustrations since the offseason. The team granted him a multi-year extension, but head coach Luke Walton changed course midway through the season and relegated Hield to a sixth man role.

With Hield being relegated to a leadership role in the second unit, Bogdanovic has assumed the starting shooting guard spot. It was an experiment that a lot of surprised people criticized, but we can’t argue with the positive results. In fact, it has turned around the season for the Kings as they now have a fighting chance to steal the last playoff seat in the Western Conference.

Since Bogdanovic was moved to a regular starting role, the Kings have gone on to win 13 of their last 20 games. They are doing this without the services of sophomore power forward Marvin Bagley. With Hield leading the second unit, their scoring has not suffered even when the team’s starters are resting.

In a separate column for The Athletic, Jones provided an in-depth analysis on how Hield’s benching has led to surprisingly good results for the team.

“The Kings were playing their worst basketball of the season when Hield was benched Jan. 24 at Chicago. Holmes and Bagley were injured and the team was headed toward a terrible finish. Something had to change, and Walton decided to try bringing Hield off the bench. The Kings won 13 of their next 20 games.

Bogdanovic’s stellar long-range shooting and oozing potential should net him near-max offer sheets from other teams. If the Kings ultimately decide to match any amount thrown at their shooting guard’s way, they will have a lot of money committed to their two scoring-oriented perimeter players. Both Hield and Bogdanovic are more adept in off-ball scoring situations, and they are yet to really improve on their playmaking skills.

Of course, you have an excellent point guard in De’Aaron Fox doing the playmaking duties. Fox’s assists average slightly dipped if compared to last season, but he is still one of the best young guards we have in the league. The 22-year old lefty guard will also enter restricted free agency in 2021, so Sacramento really has to be wise in planning how they would manage their cap space.

Among their three budding perimeter players, Fox has the best chance to grow into a superstar. Until Hield and Bogdanovic develop a multi-dimensional package in offense, they aren’t even considered as stars yet. Both players can still develop their skill set, but it is important to note that both of them are already 27 years old. Their window to make the jump from good to great is slowly closing.

However, Jones also emphasizes that Walton and the rest of the coaching staff know that Bogdanovic’s impact goes beyond the numbers. The intangibles that he provides and his high basketball IQ have been the engine of the team’s recent surge before the NBA decided to suspend the games.

“Bogdanovic will be a restricted free agent and the Kings intend to keep him. So everyone agrees there. Walton likes the chemistry Bogdanovic and Bjelica have in the starting lineup, something they’ve built while also playing for the Serbian National Team.

Bogdanovic’s 14.5 points per game were on pace for a career high, but his value goes beyond statistics. The Kings need more savvy players who can help facilitate and think the game, and Bogdanovic is one of the best they have.”

This then takes us to the possibility that the Kings would consider trading away Hield to give Fox and Bogdanovic a bigger share in the team’s offense. Sure, Hield is their best three-pointer and having him as the sixth man is a luxury that not even the best teams in the league have.

However, one can make a solid case that it is not a luxury that the Kings can afford right now. Yes, they need more depth on the roster but the Hield-Bogdanovic pairing at the wing is not producing the best results. They also traded away Trevor Ariza midway through the season, stripping them of length at the wing and a proven defensive anchor. Without Ariza, putting the undersized Harrison Barnes at the power forward position has opened up glaring holes in the team’s defensive schemes.

Barnes at four slot is an advantage in the offensive end. But the team needs to add another lengthy, versatile swingman to make up for the size that Barnes gives up at the frontcourt. They got a defensive-minded wing in Kent Bazemore in that Ariza deal, but Bazemore just stands at 6-foot-4. Looking at the Kings’ current roster, only Bazemore is a proven defender but his limited length will not make up for the weaknesses of their undersized frontcourt.

To make matters worse, keeping Hield on the bench will just make him more disgruntled than he is already. Hield has that alpha male approach as a player, and just from watching him play, it is obvious that his confidence in himself never wavers even when he is having a bad shooting night. Moreover, the four-year swingman is already one of the veterans in this young Kings squad.

In a joint column reported by Jones, Shams Charania and Sam Amick of The Athletic, it is highly-believed that Hield and his people will demand a trade from Sacramento if this current trend of benching him continues until the end of the season.

“The Kings moved past that, but Hield became irritated again last month when Walton removed him from the starting lineup and replaced him with Bogdanovic. Hield has played well since the move sparked this recent 6-3 stretch, averaging a team-high 22.2 points per game while shooting 52.6 percent overall and 51.1 percent from beyond the arc (and including a career-high 42 points on Jan. 27 at Minnesota).

If Hield remains displeased with his role, a source with knowledge of his thinking said he might request a trade. He believes he is a starter in the NBA and there's no guarantee he'll get that job back, given how the team has played lately. And unlike last season, when he never criticized [Dave] Joerger publicly and even refrained from doing so after their well-chronicled January 2019 run-in at Golden State, Hield has shown a willingness to criticize [Luke] Walton that has proved at times problematic."

Hield has also hinted numerous times in interviews that there are trust issues going on within the players and the coaches. He also expressed his frustration on the fact that Walton has been benching him during games’ crucial minutes, as the latter believes that Hield’s weaknesses on the defensive end are just too much to bear when the game gets tougher in the last minutes.

With all these said, it might be time for the Kings front office to improve the team from the outside rather than from within. Building around Fox will be the most solid option for them moving forward, and complementing him with the right supporting cast should be one of their priorities in the offseason.