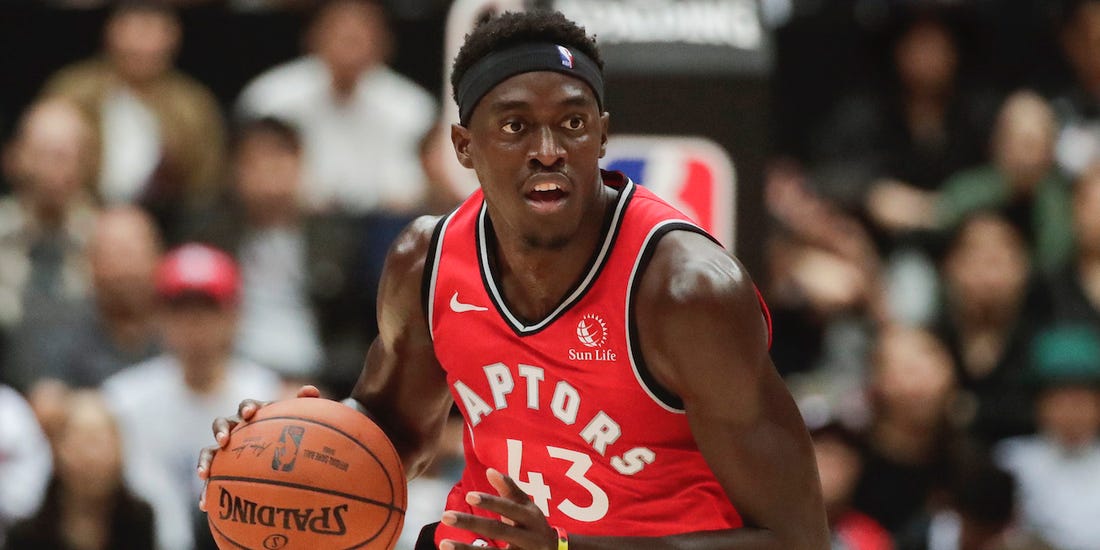 The defending champs aren’t wasting time in holding on to their most promising player. The Toronto Raptors have rewarded combo forward Pascal Siakam with a four-year, $130 million maximum rookie contract extension, as first reported by the ESPN’s Adrian Wojnarowski and Zach Lowe. Siakam is coming off a very productive third-year season that saw him win the Most Improved Player of the Year award and average 16.9 points, 6.9 rebounds and 3.1 assists per contest. With Kawhi Leonard leaving the city and Toronto’s long-tenured 33-year old star Kyle Lowry already entering the twilight of his career, Siakam will be the team’s main man this year.

Raptors general manager Bobby Webster had heaps of praises for the team’s new cornerstone, per the Raptors’ official page on NBA.com.

“Pascal has been relentless in everything he has achieved. He has embraced our  development philosophies from Day One, he’s one of us and a unique talent. He has improved himself every season without cutting any corners. He is a testament to hard work paying off and we’re thrilled that he will continue his career here in Toronto.”

In his third year in the league, Siakam has grown into a two-way player for the Raptors. He upped his scoring from 7.3 to 16.9 points, while also showing that he can actively involve his teammates with his playmaking. The max extension is a no-brainer move for the Raps front office as they are investing in a 25-year old proven star who still has a lot of room for improvement in the next few years.

Siakam’s length and mobility on both offense and defense are two assets that are very valuable in today’s pace-and-space game. Despite losing Kawhi to free agency, Siakam and the Raptors are still expected to contend for the playoffs in the Eastern Conference. The return of defensive ace OG Anunoby should be a welcome sight, and the presence of proven veterans Lowry, Marc Gasol and Serge Ibaka will push Toronto towards securing another appearance in the postseason.

It was just a week ago that the sweet-shooting Buddy Hield made headlines when he turned down a $90 million contract extension from the Sacramento Kings. The 6-foot-6 shooting guard is coming off a career-best season, averaging 20.7 points, 5.0 rebounds and an outstanding 43% clip from three-point territory. He was due for a rookie scale contract extension, which the Kings front office did offer. However, Hield turned down the offer and even told the media that he views it as an insult.

His blunt choice of words reached the high-ranking executives at the Kings organization. General manager Vlade Divac and the rest of Sacramento’s front office worked out a way to make Hield happy, and eventually reached an agreement with their star gunner. Hield recently signed a four-year, $86 million extension, a deal which also includes another $20 million in incentives.

When asked if he feels a slight hint of regret in putting out a blunt statement after turning down the initial extension offer, Hield says that he’s now just focused on doing everything he can to bring the playoffs to Sacramento.

I was just trying to plead my case with them, but that’s done now. I’m here as a King now and I’m just trying to win games and take us to the playoffs. That’s the focus now.”

This recent Hield deal has overshadowed a pending extension to another young budding perimeter player from the Kings camp. Serbian shooting guard Bogdan Bogdanovic, who is coming off an impressive World Cup stint, is taking his time in weighing an extension offer from the team. He has been offered a four-year, $51.4 million deal but Bogdanovic is yet to ink his signature on the dotted line. He is in his contract year, and if he impresses big time, he is due for a very big pay day when he enters free agency in 2020.

In an obvious bid to retain its excellent young core, the Boston Celtics and young budding small forward Jaylen Brown have agreed on a lucrative four-year, $115 million contract extension. Brown, who is entering his fourth year in the league, averaged 13.0 points and 4.2 rebounds last season. Brown also went through a productive offseason as he was chosen by legendary head coach Gregg Popovich to be a member of the national team in the recently-concluded FIBA World Cup.

Celtics president of basketball operations Danny Ainge pointed out to the 22-year old’s already-solid two-way skill set as the main reason why the team gave him the massive extension, per Boston’s official page in NBA.com.

“Jaylen has made tremendous strides over the last three years and has become a fantastic player for us on both ends of the court. A great person and hard worker who, at 22 years old, can score and defend against the best players in the NBA. Jaylen is a  true professional who did a great job accepting his role last season, and he is a major  part of our championship goals.”

Brown has been a regular starter for the Celtics in the past couple of years. The 6-foot-7 forward has shown that he can play both wing positions, while also having the ability to switch on just anyone in the defensive end. While his three-point shooting dipped from 39% to 34% last season, it won’t be surprising if Brown improves his shooting efficiency again this year. More than that, he is already great at creating his own shots. If he can further improve on his playmaking, this $115 million contract could prove to be a bargain deal for the Celtics.

In an interview with MassLive’s Tom Westerholm, Brown emphasized how thankful he and his family are in light of his recent agreement with the team.

“It definitely helps. My family is for sure appreciative. The city of Boston, we’re  appreciative of course and we want to make sure we give back as much as we can, whether we do that with our time, whether we do that on the court, or we do just making relationships. It definitely helps but still got a lot of work to be done, to be honest. I say that not just because that’s the right thing to say I truly believe that -- a lot of work to be done and I want to be the first one in, last one out.”

As good as he already is, there’s no question that Brown still has a lot of work to do. Newly-acquired superstar guard Kemba Walker is undoubtedly the main man for the team. But Brown is still arguably trailing Jayson Tatum in the team’s line of scoring options. A more consistent perimeter shot and a much-improved passing ability should help Brown bolster his stock and get more scoring opportunities in head coach Brad Stevens’ system.