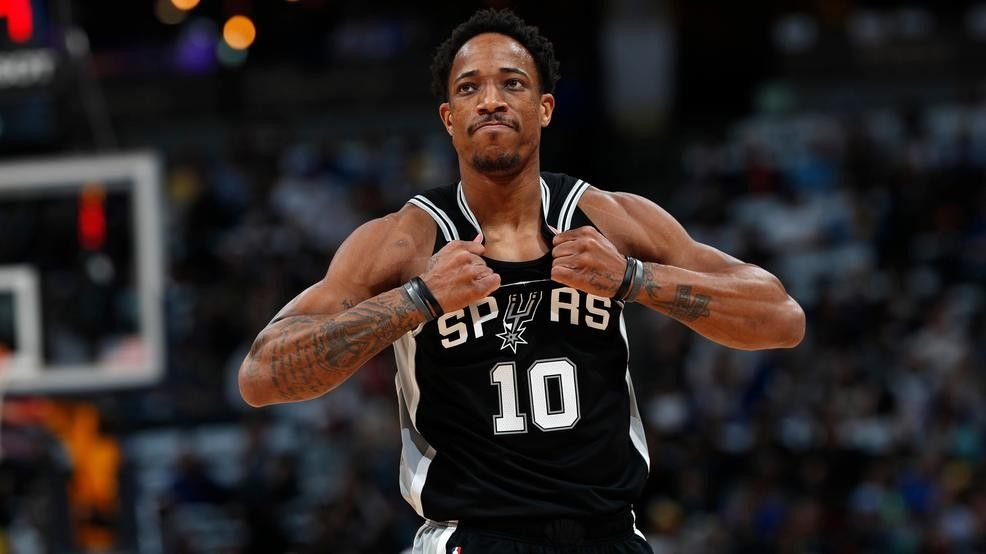 Just a couple of years ago, it sure looked like All-Star shooting guard DeMar DeRozan will spend his entire career with the Toronto Raptors. The city loves him, and he has poured every ounce he has to help the Raptors become relevant again. But with the golden opportunity to land a top-tier superstar in ex-Spurs forward Kawhi Leonard, the Raptors waved goodbye to DeRozan in a bid to speed up their journey towards finally wearing a championship ring. We all know how it turned out for the Raptors, although DeRozan has been fairly reserved about his relationship with the San Antonio Spurs.

But it also turns out that DeRozan is also in a happy place in San Antonio. Shams Charania of The Athletic recently reported that he and the Spurs front office are currently discussing a possible contract extension. The All-Star scorer has a $27 million player option in 2020, and many believe that he could opt out of that and look for a near-max contract from another team. Charania wrote that the Spurs organization deems DeRozan as a franchise cornerstone and are keen on working out an extension with him.

“The Spurs value DeRozan. They believe the four-time All-Star is an anchor for the franchise and are keeping an open mind entering the season. He had a strong summer of training in Los Angeles, according to those present at his workouts and five-on-five runs with other NBA players, using last season’s non-All Star season as motivation in his 3-point shooting game and overall repertoire.

One source who saw DeRozan work out this summer in Los Angeles told The  Athletic that his shooting looks improved and his mindset will benefit from a full summer to digest the knowledge gained after a year in Gregg Popovich’s system.”

In his first year of playing within Pops’ system, DeRozan came out with a very productive season. His scoring may have dipped a bit (21.2 ppg) but he re-introduced an often underrated part of his game: passing. The 30-year old star proved than he is more than a scorer as he dished off a career-high 6.2 assists per contest. He also logged in 6.0 boards last season, another career-high for him. The only area in DeRozan’s game that backfired was his three-point shooting. Popovich isn’t really a fan of letting his players be trigger-happy from beyond the arc, and it was evident in the fact that DeRozan attempted the least three-point attempts he had since the 2010-11 season.

Derrick White, the Spurs young combo guard, expressed his joy in being DeRozan’s teammate, as per Tom Orsborn of My San Antonio.

"I have learned a lot from him just from that one year. He's always pulling me aside, telling me what to work on, checking on my head and stuff like that. In the locker  room, he is great. Everybody gets a long, him joking around. He's a great guy and a great teammate."

The Spurs retained their key players this upcoming season. Despite not having a star acquisition during the offseason, they will be bolstered by the returning Dejounte Murray and the continuous growth of White, Lonnie Walker and Bryn Forbes. But if they want to make some loud noise in the stacked Western Conference, the Spurs will be relying on the able shoulders of DeRozan and scoring big man LaMarcus Aldridge.

What’s in store for Drummond in 2020 free agency?

How will Detroit Pistons star center Andre Drummond approach his impending free agency next year? Although the 26-year old big man still has a $28 million player option in the 2020-21 season, many believe that he will instead enter unrestricted free agency and gauge the league’s interest in giving him a max extension. The two-time All-Star is coming off another double-double season that saw him rack up a career-high 17.3 points, 15.6 boards, 1.7 steals and 1.7 blocks per game. Better yet, he is still young and is just entering the peak of his career.

However, Heavy.com’s Sean Deveney recently reported that Drummond might find out that other teams don’t really have a high interest in acquiring him. Deveney included a quote from an anonymous league executive, who said that the star center’s traditional style of play is already outdated in today’s pace-and-space game.

“He just won’t have a lot of options. Detroit won’t have a lot of options, either. There won’t be a lot of free-agent money and most of the teams that have it are rebuilding teams who might not want a big like him anyway. He’s kind of old-school and you have to be willing to make your roster around that. Detroit, that’s what they’re willing to do. He probably won’t get a better situation than what he has.”

In his six years with the Pistons, Drummond is yet to develop a consistent long-range shot. We have seen the value of big men with limited range like Hassan Whiteside go down, and Drummond could be in line in that trend. He is also a poor free throw shooter, making a measly 59% clip from the charity stripe last season. Furthermore, Drummond is still not an elite post-up offensive player as compared to his counterparts such as Philadelphia 76ers superstar Joel Embiid.

Drummond’s biggest bet could be an extension with the Pistons. The problem is that he and the Pistons are yet to produce a successful season. His frontcourt partnership with power forward Blake Griffin isn’t working, either. Although Griffin has worked on his three-point shot in the past couple of seasons, his main tendency is still to put the ball on the floor and aggressively drive to the rim. In today’s perimeter-oriented game, a line-up integrating two traditional big men will not suffice.

In an interview with Detroit Free Press’ Vince Ellis, Pistons team owner Tom Gores says that they are committed on holding on to Drummond but also emphasized that it’s quite early to talk about his young center’s impending free agency.

“We know how dedicated we are to each other. I've said it many times: He's very underrated in a lot of ways for what he does, and culturally he's been so good for this team, just in terms of his attitude, and just watching him really grow up. I met him when he was 18.

We’ve got to run the process. Everybody’s talking at a business level and we have a lot of respect for each other, but it’s early.”

Of course, we know that Gores is just taking a safe publicity talk here. We don’t know what their real plans are, although it’s clear that they want to contend right now. They signed quality vets Derrick Rose and Markieff Morris in the summer, while holding on to Drummond, Griffin and starting point guard Reggie Jackson. It is arguably an all-or-nothing season for Detroit, considering how full their salary book is. If this turns out to be another disappointing year, it is almost sure that the Pistons front office will blow it up and might even consider letting Drummond walk in free agency.

Fourth-year small forward Brandon Ingram is eligible for a contract extension, but he is not letting the business side of the game to affect his on-court performance. The 22-year old Ingram is staying patient on how the New Orleans Pelicans front office will approach his impending extension. When asked about his thoughts on the possibility of the Pelicans offering him a massive extension, the young gun says that he is just beyond blessed to be in this position in his young career, as per Christian Rivas of USA TODAY Sports’ Lonzo Wire.

“When I grew up as a kid, I never put the money involved. I always just like to play basketball. You couldn’t have told me that I was going to make a million dollars at seven years old or eight years old, so I just look at it like that. I’m humble and I’m blessed to play this game of basketball, so I’m just going to keep playing this game of  basketball to the best of my ability and everything can handle itself.”

Ingram is coming off a career-best season that saw him average 18.3 points, 5.1 boards and 3.0 assists per contest. He was the centrepiece of the package that the Pelicans received in the blockbuster Anthony Davis deal. Ingram is expected to start at the small forward position with his new team, and should further increase his numbers this season.