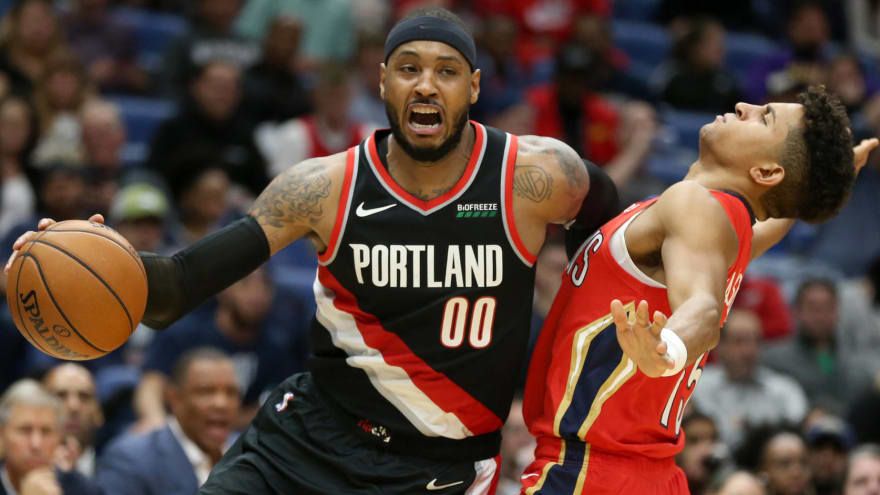 He. Is. Back. Carmelo Anthony has successfully blazed the comeback trail (puns intended) as he is now set to play for the Portland Trail Blazers. ESPN’s Adrian Wojnarowski reported that the 35-year old scoring forward has signed a non-guaranteed contract with the Blazers. It has been quite a long wait for basketball fans, and frankly for Anthony. After playing the first 10 games of last season, he was cut by the Houston Rockets and has been searching for his new NBA home ever since.

Blazers superstar guard Damian Lillard, who the team contacted to confirm their plans of signing Anthony, says that he highly approves of the acquisition, per Casey Holdahl of the NBA.com.

“I’m all for it. I think we’re in a position where we’ve got a lot of guys hurt. I think he  can do something to help us with his size, his ability to space the floor, his ability to shoot. Another option to throw someone the ball who can score in isolation situations, good rebounder and just the experience. He’s a good player, regardless of what the last few years in Houston and OKC looked like. I didn’t think either one was a great   fit. I think he can do things to help our team. We’re not in a position to complain  about it. He’s a Hall of Fame player and he can still play.”

This is not the first time that Portland has pursued the services of the three-time Olympic gold medalist. There have been speculations that they have always tried to trade for Anthony when he was still playing for the New York Knicks. When that didn’t work out, they attempted to sign him in free agency in the past but that didn’t turn out great as well.

As for Anthony, this is a golden opportunity for him to cap off his basketball legacy. Of course, his legacy isn’t just based on his struggles in the past two seasons. Melo has stellar career averages of 24.0 points and 6.5 rebounds, an excellent indicator of how he has been a Top 10 player in the most part of his career. Aside from his scoring and rebounding, he is an underrated passer and a good off-ball scorer. There’s no question that he will inject a much-needed boost on the Blazers’ offense.

However, it is in the defensive end that will pose serious challenges for Anthony and his new team. He has never been a household name on that end of the floor, and one can see that he doesn’t exert much effort defensively. To make matters worse, he is joining a Blazers team that has been lowly defensively this season. Portland gives up 114.1 points per game to their opponents, good for the fourth-worst in the league. Despite the presence of a rim-blocking maestro in Hassan Whiteside, Whiteside is not that good in defensive coverage and switches. The same thing could be said for Anthony, who is kind of slow on his feet on defense. On top of that, he is already 35 and his athleticism and mobility should be in an all-time low. It remains to be seen how Blazers head coach Terry Stotts will plot his defensive schemes, but the optimism is very low for Anthony at that facet of the game.

Still, his new Blazers teammates are very happy to have him on the squad. CJ McCollum emphasized how Anthony does a bit of everything, especially on offense.

“He’s a veteran guy, been in the league for a long time, can do a lot of things.   Rebounding – something he can do right away – pick-and-pop, obviously he plays in the midrange but can still shoot threes. We’ll see how he fits in when he gets here but I think there’s a lot of ways we can use him and utilize him.”

Anthony will be inserted to the forward position, may it be the three or the four spot. He will be competing for playing time with Rodney Hood, Kent Bazemore, Mario Hezonja and Nassir Little. A good 18-20 minutes per game should be expected for Anthony, who would still need more time to acclimatize himself to the speed of the game and to condition his body well.

In an effort to fill the void left by the injured Caris LeVert, the Brooklyn Nets have brought in combo guard and defensive specialist Iman Shumpert. LeVert suffered a thumb injury that will keep him out for four to six weeks. Even though Caris will not miss a long span of time, the Nets are getting thin on the wing position. Wilson Chandler is still serving his 25-game suspension for violating the league’s anti-drug policy, while superstar Kevin Durant is not expected to return at this early part of the season.

Nets head coach Kenny Atkinson says that defense is where Shumpert enters the team picture, per Brian Lewis of the New York Post.

“He fits a need right now. Perimeter defense, that’s always been his calling card. I … know him well, know the personality. He gets after it defensively. That will be his role for us.”

Shumpert is also a proven winner in the league. He played a huge role in helping the Cleveland Cavaliers win the championship in 2016. But the 29-year old combo guard has been on a downward spiral since. He has seen his minutes decrease with the Cavs, and he bounced from the Sacramento Kings to the Houston Rockets last season. Still, Shump can score the ball, even from three-point territory. He put up 7.5 points and 3.0 boards in limited minutes last year. He also shot a decent 35% clip from beyond the arc, establishing himself as a good 3-and-D player.

Another important thing to note is that Shumpert is already familiar with some of the key names in the Nets organization. Kyrie Irving and Joe Harris also played on that 2016 Cavaliers championship squad, while Atkinson served as an assistant coach for the Knicks during Shump’s rookie year in New York. Iman couldn’t help but feel an extra relief that he will be reuniting with these men.

“Oh, hell yeah. It’s a comfort for me, but it’s also a mutual respect and     understanding. I don’t have to reintroduce myself to those guys. I can be myself, do what I normally do and be free out there, especially with KA being the head coach.

He was my guard coach. When I first got drafted, I worked out with him 30, 45 minutes before practice every day. Being back under his wing, it just feels full circle being back in New York.”

With LeVert and Chandler missing in action for several weeks more, Shumpert will share minutes with Taurean Prince, Garrett Temple, Joe Harris and Dzanan Musa on that wing position. Irving is also currently on the day-to-day list as he is dealing with a minor shoulder injury. That should provide more playing time for Shumpert, an excellent start for him to build chemistry with his new teammates.

It was quite a surprise when Malcolm Brogdon left the Milwaukee Bucks camp last offseason to join the Indiana Pacers. What’s even more surprising is that the Bucks didn’t nab the opportunity to match the Pacers contract offer for Brogdon, who was then a restricted free agent. Re-signing Brogdon would mean that Milwaukee will be paying the luxury tax, a difficult situation for a small-market team in the NBA.

But the Greek Freak says that he wishes Malcolm is still with the team, while imagining how their squad will be if the Bucks offered the 26-year old guard a contract extension, per Eric Nehm of The Athletic.

“Can you imagine this team with also Malcolm? But hey, man, everybody takes their decision. His decision was to go to Indiana and build a team over there. I think that was best for him.”

Brogdon, who won the Rookie of the Year award during the 2016-17 season, is having a career year with the Pacers. He is posting incredible all-around averages of 19.2 points, 4.8 rebounds and 8.2 assists, while helping the Victor Oladipo-less Pacers to a decent 7-6 record to start the season. When asked by The Undefeated’s Marc J. Spears on how Giannis has impacted his development as a player, Brogdon only had positive things to say.

“Honestly, I think that is part of my growth. Playing with a guy like that has helped me become a better player. So, I don’t think that stunted me at all. I think it actually prepared me more. And I actually got to see what he had to go through on a daily basis.”

Brogdon logged in a productive three-year stint in Milwaukee. He averaged double-digits in scoring in each of those years, and even achieved the rare 50-40-90 shooting percentage with the Bucks last season.