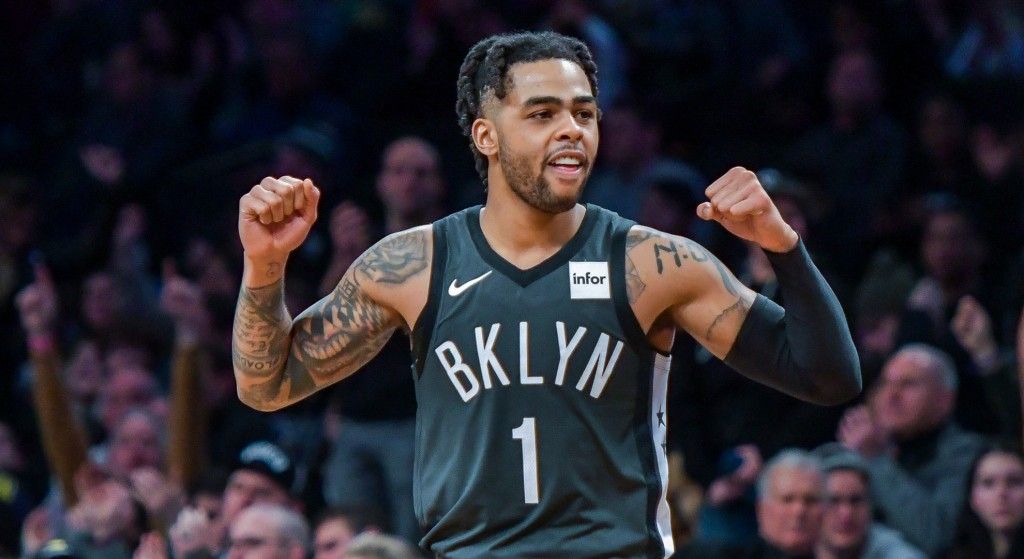 With speculations circling that the Golden State Warriors will use recently-acquired All-Star guard D’Angelo Russell as a trade bait down the road, fans should shot those rumors down, per Keith Smith of RealGM. Smith says that he talked to an executive from the Warriors front office and was told that the team sees Russell as a fit for their long-term plans.

Here’s what the Warriors executive has to say about the D’Angelo trade speculations:

“I’m trying to be nice, but that is the stupidest thing I’ve ever heard. A 23-year-old  All-Star on a four-year deal better be someone you can trade easily, or we’re all idiots. Did we sign D’Angelo to trade him? No. We signed him because we had an opportunity to land an All-Star to replace the All-Star we were losing. Let’s not play conspiracy theory here.”

Russell, 23, averaged career-highs of 21.1 points, 7.0 assists, 3.9 rebounds and 1.2 steals per contest for the Brooklyn Nets last season. With the Nets signing superstar point guard Kyrie Irving early in the offseason, it became obvious that Russell’s time at Brooklyn was over. There were a lot of hearsays that the Minnesota Timberwolves were the favorites to land him, but twists and turns led to a sign-and-trade deal that brought two-time Finals MVP Kevin Durant to Brooklyn and Russell to the Bay Area.

When news were confirmed that the young first-time All-Star was headed to Golden State, rumors immediately poured in regarding the Warriors’ plans of potentially trading Russell before the February trade deadline. Injured star Klay Thompson could be close to coming back to the court by that time, and that could spell more questions than answers in terms of the fit of a perimeter lineup of Russell, Thompson and Stephen Curry. Unless Russell drastically improves on the defensive end, offensive players would put a lot of mismatches on him and Curry.

Still, it won’t hurt to try out this experiment. After all, the pressure has been lifted off the Warriors’ shoulders especially with the departure of their key cogs in Durant, Andre Iguodala, Shaun Livingston, Quinn Cook and Jordan Bell. Warriors head coach Steve Kerr expressed his excitement on figuring things out with Russell and how the team’s pass-first, movement-fluid system would integrate the lefty gunner’s unique skill set.

“[He’s a dynamic] player in the pick and roll, excellent shooter and I like his in-between game. He makes a lot of plays out of the pick-and-roll. Those float shots are tough to master, and he makes those pretty routinely. So, we can do a lot of things with D’Angelo on and off the ball.”

While Durant is far more superior than Russell in terms of their overall abilities, both players have similar tendencies on offense. Russell can also shoot the long three like Durant can, while also having the ability to put the ball on the floor and either settle for an easy mid-range jumper or drive down the lane for a creative finish. We haven’t seen a lot of plays positioning Russell in off-ball scoring opportunities as he was tasked to be the primary ball-handler during his stints with the Nets and the Los Angeles Lakers. It’s expected that Warriors point forward Draymond Green will handle the ball more especially with Durant not around, so Russell should be forced to work on his positioning and movement without the ball in his hands.

While it’s safe to say that the Warriors are not the clear-cut favorites to win the championship next season, teams in the Western Conference shouldn’t be happy facing Curry and company during the playoffs. Klay should have recovered from his ACL injury come playoff time, while their frontcourt lineup of Green, Kevon Looney and Willie Cauley-Stein could be a force to reckon with.

With reports piling up on the implications of Kawhi Leonard’s delayed free agent decision, the superstar forward finally addressed the assumptions that he tried to manipulate the teams that pitched to him – most notably the Toronto Raptors and the Los Angeles Lakers. Leonard, who ultimately ended up pairing with All-Star forward Paul George with the Los Angeles Clippers, spoke with Yahoo Sports’ Chris Haynes to clear out the bad air regarding his free agency.

“I didn’t lead anyone on. I took my time in free agency, as I should, to make sure I made the best decision for myself and my family. I feel like some of the media coverage over it made it feel that way, with people saying I’m signing with Toronto 99 percent or I’m going to the Lakers 99 percent. I don’t ever want to have that bad karma come back on me trying to make the Lakers miss out on players they should    have gotten or vice-versa with the Raptors.”

Even before he won the championship with the Raptors last season, Leonard has long since expressed his desire to go back to his hometown and play for either the Lakers or the Clippers. Of course, many media outlets and NBA fans got too amped up with the thought of Leonard teaming up with Lakers superstars LeBron James and Anthony Davis but the two-time Finals MVP had other plans. It would turn out that Kawhi asked the Clippers front office to bring in George, a granted request that led to his decision to sign with the Doc Rivers-led Clippers.

But the final decision wasn’t easy for Leonard. During an exclusive interview with Rachel Nichols of ESPN, Leonard pointed out that he was “real close” to signing with either the Lakers or the Raptors. Still, the George trade plan came up and he couldn’t pass up the chance to play with the star forward, who he admittedly even recruited to play with him during his tenure with the San Antonio Spurs a couple of years ago.

This recent talk from Leonard should clear out any allegations that he and his camp had hidden motives during pitches and contract negotiation. Joe Vardon of The Athletic reported that Masai Ujiri and the Raptors organization felt upset of how Leonard’s camp played out their decision.

“Privately, of course he’s [Masai] upset. Most in the Raptors’ organization are, at least to some degree. Several sources confirmed this to The Athletic (the hurt feelings part). While they never felt misled, they did believe Leonard used them as leverage in free agency.”

As for the Lakers standpoint, The Athletic also reported that Magic Johnson’s apparent leakage of his meeting with Kawhi spelled doom for the organization in terms of acquiring Leonard.

"I truly believe that when Magic started telling the media about the meeting he had   with Kawhi and Dennis, that sealed the fate of the Lakers," a person "involved in the process" told The Athletic. "I think that right there was when Dennis and Kawhi decided we can't trust the Lakers as an organization. And that was it."

While we may never know the inside intricacies of the process of Kawhi’s decision, teaming up with George with the Clippers could be positive for the betterment of the league. Forming another big trio with the Lakers could have been detrimental for the power balance in the NBA. From the Clippers franchise’s perspective, acquiring two top-tier stars in Leonard and George has assured everyone that their team success in the past couple of years was not a fluke.

Carmelo Anthony may have been unemployed for almost a year now, but he could easily compete for a roster spot in the NBA if given the chance. Melo’s trainer, Chris Brickley, talked about his unwithering belief for the 35-year old vet during an appearance on The Breakfast Club.

“He’s easily better than 60 percent, 70 percent of the NBA players walking around.

It’s just that teams are afraid of ‘I want to be a starter.’ It’s not the case. Melo just wants to have a farewell season, do what D-Wade did. Have a jersey swap. He had a great career, he’s a Hall of Famer. So hopefully that could happen.”

Carmelo last appeared in the league with the Houston Rockets last year, but his season ended early when both parties agreed to part ways. Reports have it that Anthony wasn’t bent on taking a role off the bench, something that the Rockets coaching staff planned to do. It was speculated that the Lakers took an interest in signing him last March but the losses piled up for the Lakeshow, making it illogical to bring in Anthony as the team will miss out on the playoffs.