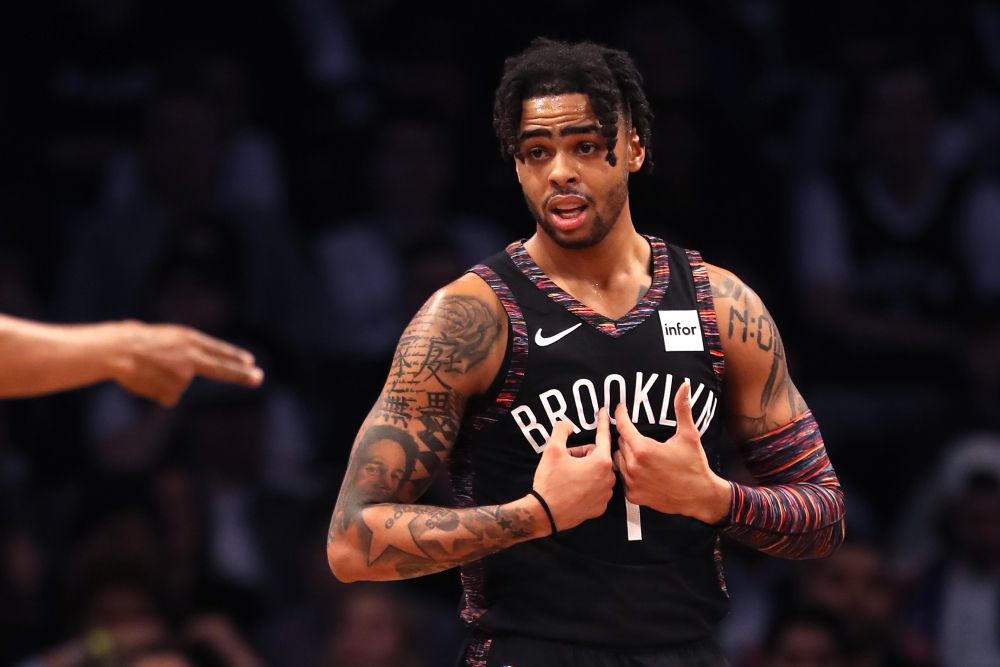 With a young core of Zach LaVine, Lauri Markkanen and Wendell Carter Jr as their cornerstones for the future, the Chicago Bulls might go quicker on their rebuilding process by nabbing a star point guard in free agency. Forbes’ Jason Patt recently brought up the idea that the Bulls could pursue Brooklyn Nets star and restricted free agent D’Angelo Russell to form a deadly 1-2 backcourt punch with LaVine.

“A Russell-LaVine backcourt would be dynamic offensively, with both players able to play on and off the ball effectively. They would be able to score in bunches and rain fire from long distance. Russell is already a terrific playmaker, while LaVine is  getting better in that area. Having a pair of shooters and playmakers together in the backcourt would make the Bulls’ offense dangerous, especially when rounding out the lineup with Lauri Markkanen, Otto Porter Jr. and Wendell Carter Jr.”

The lefty scoring point guard has grown to become a solid leader for the uprising Nets team last season. Russell posted career-high numbers of 21.1 points, 7.0 assists, 3.9 rebounds, and 1.2 steals per game in a season that saw him earning the first All-Star selection of his career. Russell also averaged career-high shooting percentages of 51% from the field, including 37% from beyond the arc. He led the Nets to a surprising playoff berth, losing to Joel Embiid and the Philadelphia 76ers in a tightly-contested series that ended in five games.

Aside from the Bulls, Russell has a number of suitors this summer. The Minnesota Timberwolves, the Phoenix Suns and the Indiana Pacers are reportedly interested in his services, while an extension with the Nets is still a possibility. However, reports of Kyrie Irving heading to the bright lights of Brooklyn are already engulfing the social media, and SNY’s Ian Begley says that that possibility will greatly affect Russell’s decision on re-signing.

“But the Nets' hopes of landing stars in Brooklyn will have an impact on Russell's     future with the club.

If Irving signs with the Nets, SNY sources familiar with the matter say it is highly unlikely that Russell remains with the Nets. Members of the Nets organization have communicated that idea in recent days, per sources.”

Indeed, a pairing of Russell and Irving could be a failed experiment as both players are more adept in having the ball in their hands. With Irving recently joining hands with Roc Nation Sports (founded by Jay-Z, a former Nets co-owner), it is increasingly becoming apparent that the six-time All-Star will be having Brooklyn as his new home.

While it would be a disappointing end to the Russell-Nets partnership, the young spitfire guard could find greener pastures with other teams. The Pacers have been a playoff contender in recent years with their dynamic young core of Victor Oladipo, Domantas Sabonis and Myles Turner. A weak spot on their roster is their lack of a capable playmaker who could also create his own shots to take the load off Oladipo’s shoulders. The Suns also have a formidable duo in place. With Devin Booker establishing himself as a prime time scorer in the league, and Deandre Ayton proving that he is a walking double-double machine each night, the Suns are in need of a point guard to set up the table for the team. It’s safe to say that Russell can easily fit the bill for the needs of those two young teams.

Kawhi will meet with 5 teams for FA decision

Fresh off from winning his second NBA championship, Toronto Raptors superstar forward Kawhi Leonard will have his hands full in his upcoming free agency this summer. According to Cris Carter of Fox Sports 1, Kawhi will meet with five teams and go on from there in making his decision as to where to play next season and beyond.

“The Raptors are the favorites and then it’s gonna go like this —in no order— both teams in New York: that being the Knicks and the Brooklyn Nets. They will both get sit-down interviews with Kawhi. Also the Los Angeles Lakers will be a part of the     discussion. Yes, he will sit down with them and the Clippers. So Clippers, Lakers,  Nets, Knicks and the Raptors — those are the five teams that will be involved in the Kawhi Leonard sweepstakes.”

Kawhi recently secured his second Finals MVP award, and produced tremendous averages of 30.5 points, 9.1 rebounds and 3.9 assists during the playoffs. With how successful his tenure has been at Toronto, chances are that Leonard will re-sign with the Raptors for a shorter deal and help his team pursue a coveted back-to-back championships bid.

News of a possible Leonard-Lakers partnership recently made waves just a couple of days after the Lakers pulled off a blockbuster trade for star big man Anthony Davis. ESPN analyst Damon Jones made an announcement during Monday’s episode of Get Up!, saying that the Lakers are looking at Kawhi to form a deadly trio with Davis and LeBron James.

"After the AD trade on Saturday, I had a conversation with somebody that's close to the situation that said Kawhi Leonard is now in play for the Lakers. Now there's a   lot of things that have to happen. The Lakers have to clear the cap space, although   Kawhi Leonard right now is still contemplating if he's going to go back to Toronto.   And if he does that, it'd be on a shorter deal."

Among the max free agents that the Lakers are looking at are Leonard, Kemba Walker of the Charlotte Hornets, Kyrie Irving of the Boston Celtics and Jimmy Butler of the Philadelphia 76ers. All season long, it is a belief around the league that the Clippers have the inside advantage on nabbing Kawhi. But as the playoffs deepened and it’s becoming obvious that Leonard has connected well with his Raptors teammates and the whole Toronto team, reports have it that the Clippers are now less confident in prying the two-way superstar away from Toronto.

Little to no communication between Kyrie and Celtics in recent weeks

It is widely-believed around the league that Boston Celtics star point guard Kyrie Irving doesn’t intend on re-signing and has already set his sights on playing for the Brooklyn Nets next season. Boston Globe’s Adam Himmelsbach reported that Kyrie hasn’t been communicating with the Celtics front office.

“The strangest part of the Irving situation right now is that it appears he has   essentially ghosted on the Celtics. The people within the organization I have spoken with have made it clear that they have had little, if any, communication with Irving in recent weeks.”

The Celtics acquired Irving through a blockbuster trade with the Cleveland Cavaliers in 2017. The star scorer missed the playoffs last year with an injury, then failed to lead his team to a deeper postseason run this year. Boston’s recent hesitant stance on pulling the trigger on an Anthony Davis trade was caused by their belief that Kyrie will not re-sign with the team. Still, Shams Charania of The Athletic reports that the Celtics top brass are scheduled to meet with Irving before the draft on Thursday.

“All-Star Kyrie Irving, who has decided to opt out of his $21.3 million deal for next  season to become a free agent, and top Celtics officials are expected to meet with him  soon to discuss his future, league sources said. A potential meeting could occur  before Thursday’s NBA draft sources said, as both sides could look for clarity ahead  of the start of free agency on June 30.”

During this year’s playoffs, Kyrie mightily struggled from the field as he only put up a 44% clip from the field, including a below-average 31% from three-point territory. He has found it difficult to mesh with the rest of the Celtics players, prompting beliefs that the Celtics could be better off without Irving.