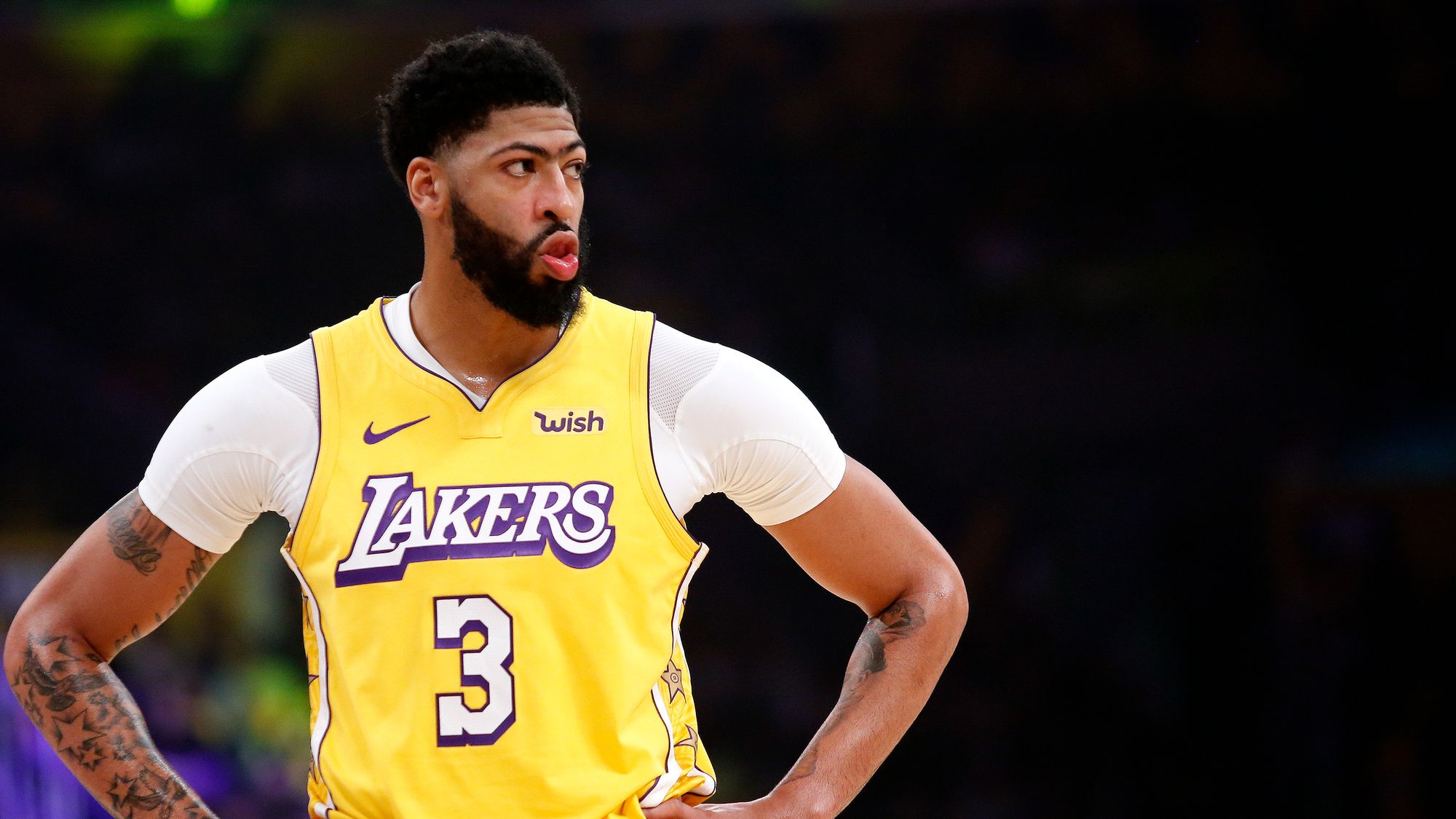 NBA Free Agency Report: Anthony Davis Not Ready to Address His Future With the Lakers

Los Angeles Lakers superstar Anthony Davis is likely still in cloud nine after winning the first NBA championship of his career. Davis made a lot of headlines with his spectacular play in the 2020 NBA Playoffs and Finals. The superstar forward is also expected to make a lot of noise in the offseason, as he is tipped to become the biggest name who would be available in the market when the free-agency period begins.

Davis still has a year left in his contract that would pay him $28.75 million next season. However, the 27-year-old forward is expected to decline his player option and become a free agent. Following their title-clinching win over the Miami Heat on Sunday, the former first overall pick was asked about his free-agency plans. Davis quickly said that he has no idea at this point, but he clarified that he had a great time with the Lakers in his first season.

"I had a great time in L.A. this first year," Davis said via ESPN. "This has been nothing but joy, nothing but amazement. Over the next couple of months, we'll figure it out. I mean, I'm not 100 percent sure, but that's why my agent is who he is, and we'll discuss it and figure it out."

Los Angeles acquired Davis last offseason via a blockbuster deal with the New Orleans Pelicans. He made it no secret that one of his preferred destinations is Los Angeles and he got his wish when the Lakers tendered an offer that was too hard to pass up for the Pelicans. New Orleans acquired Brandon Ingram, Lonzo Ball, Josh Hart, and three first-round picks, including the fourth overall pick in last year's draft.

Although they paid a hefty price to acquire Davis, the Lakers got what they wanted from him. Aside from helping the Lakers win their 17th championship in franchise history, Davis also made it into the 2020 All-NBA first team and All-Defensive first team, and also finished second to Giannis Antetokounmpo for the Defensive Player of the Year award. The former Kentucky standout averaged 26.1 points on top of 9.3 rebounds and 3.2 assists for the Lakers.

While he remains non-committal about his future, it is widely-believed that Davis will eventually sign a new deal with the Lakers. Opting out of his contract is not a surprise, as it would give him an opportunity to sign a maximum deal that could pay him more than $32 million next season. Zach Buckley of Bleacher Report is convinced that Davis will end up signing a long-term deal with the Lakers in free agency.

"There is enough uncertainty with the financial climate to wonder whether Anthony Davis might actually exercise his $28.8 million player option. But that's the only suspenseful part of this process," Buckley said. "Even the most fervent Lakers haters would have a hard time finding reasons for AD to bolt from his new Hollywood home.  He's still getting the individual accolades to which he's accustomed—All-NBA and   All-Defensive first teams—and similar numbers to what he had in New Orleans, only  now he's co-starring on a likely champion."

His relationship with fellow superstar LeBron James could also become a huge deciding factor for Davis. James has said numerous times during the playoffs that his relationship with Davis is solid because there is no jealousy between the two of them. It also helps that Davis is being tagged by many as the best superstar James has ever played with because of how they fit each other's game, as proven by James' league-best 10.2 assists per game last season.

"I can't really explain it," James said when asked about his relationship with Davis via ESPN. "It's just certain things you know. In any type of relationship, you kind of just feel, you know, that vibe, you can have that respect. You have that drive, and sometimes you can't explain what links you with somebody, and that's organic."

James could also relate to what Davis went through in his first seven seasons in the league. Like James, Davis had chances to go deep into the playoffs during his stint with the Pelicans but failed to win a title. James had the same experience during his first run with the Cleveland Cavaliers, which forced him to take his talents to Miami, where he won two titles with fellow superstars Dwyane Wade and Chris Bosh.

The four-time NBA Most Valuable Player has been very vocal that he and Davis are bringing out the best in each other. James said that he wants Davis to be better than him, while Davis challenges James to be better as well. Davis, for his part, also confirmed that he has a strong relationship with James, which grew from his first day in Los Angeles Lakers and even when the league went on a long hiatus due to the Covid-19 pandemic.

"We're close on the court, but you've got to see us off the court," Davis said via Sports Illustrated. "It's unreal. I'm always at his house. He's always at my house. This is true the entire season. There's no jealousy. No one is envious of each other. Guys don't have personal agendas. We're just two guys who just want to win for various reasons."

It remains to be seen whether or not Davis would even give other interested teams a chance to make a pitch. The Lakers would prioritize securing a new deal early in free agency before taking care of their supporting casts. Kentavious Caldwell-Pope, Rajon Rondo, Avery Bradley, and JaVale McGee have player options for next season, while Dion Waiters, Markieff Morris, Jared Dudley, and Dwight Howard will become unrestricted free agents.

Danilo Gallinari Wants to Play for a Contender

Danilo Gallinari will also become one of the names to watch when the 2020 NBA free agency period kicks off. The Oklahoma City Thunder forward is set to become an unrestricted free agent and is expected to attract a lot of suitors in the shallow market this offseason. Based on his recent statement about his future in the league, it appears that he has already played his last game in a Thunder uniform.

According to Slam Online, Gallinari was asked during an interview with Festival dello Sport in Italy if he would prioritize winning a championship over money in free agency. The 32-year-old forward did not hesitate and said that he would look to sign with a championship contender because he is not getting any younger. The Thunder are now likely out of the picture, as they are expected to rebuild especially when they find a taker for Chris Paul.

Gallinari will not have a shortage of suitors based on how he performed in the last two seasons. During the 2018-19 NBA season with the Los Angeles Clippers, he posted career-highs 19.8 points and 6.1 rebounds per game despite coming off a knee injury. He was eventually traded to the Thunder, where he was able to sustain his momentum, as he posted 18.7 points and 5.2 rebounds in 62 games with the Oklahoma City this season.

The former sixth overall pick has been linked numerous times to the Miami Heat, who can meet his requirement of playing for a contender. The Heat, whose team president Pat Riley is reportedly high on Gallinari, went two wins away from completing a Cinderella run in the playoffs this season. Miami tried to trade for him before the deadline in February, and Zach Buckley of Bleacher Report said he will not be surprised if they try to sign Gallo this offseason.

"He's still the best way to fill the 4 spot as his three-point shot keeps the floor spaced and his ability to create adds another option for late-game or late-shot-clock situations," Buckley said of Gallinari. "If he's open to pocketing a one-year contract with a massive salary to compete for the crown in South Beach, the Heat could raise their ceiling without spoiling any of their future ambitions."

However, Sam Quinn of CBS Sports thinks that chasing Gallinari is not a given for Miami. While Gallinari could be an additional piece for a possible title run next season, Quinn thinks that Miami would prioritize keeping Goran Dragic and Jae Crowder, who are also set to become free agents this offseason. If the Heat keep both veterans, it would be hard for them to make room for Gallinari, as they are also preparing to make a big splash in free agency next year.

"Bringing in Gallinari now seems unlikely for the Heat," Quinn said. "Their cap space disappears if they choose to re-sign their own free agents, and in all likelihood, they prefer the idea of keeping Goran Dragic and Jae Crowder to pursuing Gallinari. Even if they are interested, their offer probably wouldn't exceed one season. The Heat are expected to pursue Giannis Antetokounmpo in 2021 and need a clear cap sheet to do so."

Quinn added that reaching his goal of signing with a contender would depend on how much he is willing to give up in terms of salary. To play for a contender, Quinn said that Gallinari should either accept a Mid-Level Exception contract or find a way to arrange a sign-and-trade deal involving the Thunder.