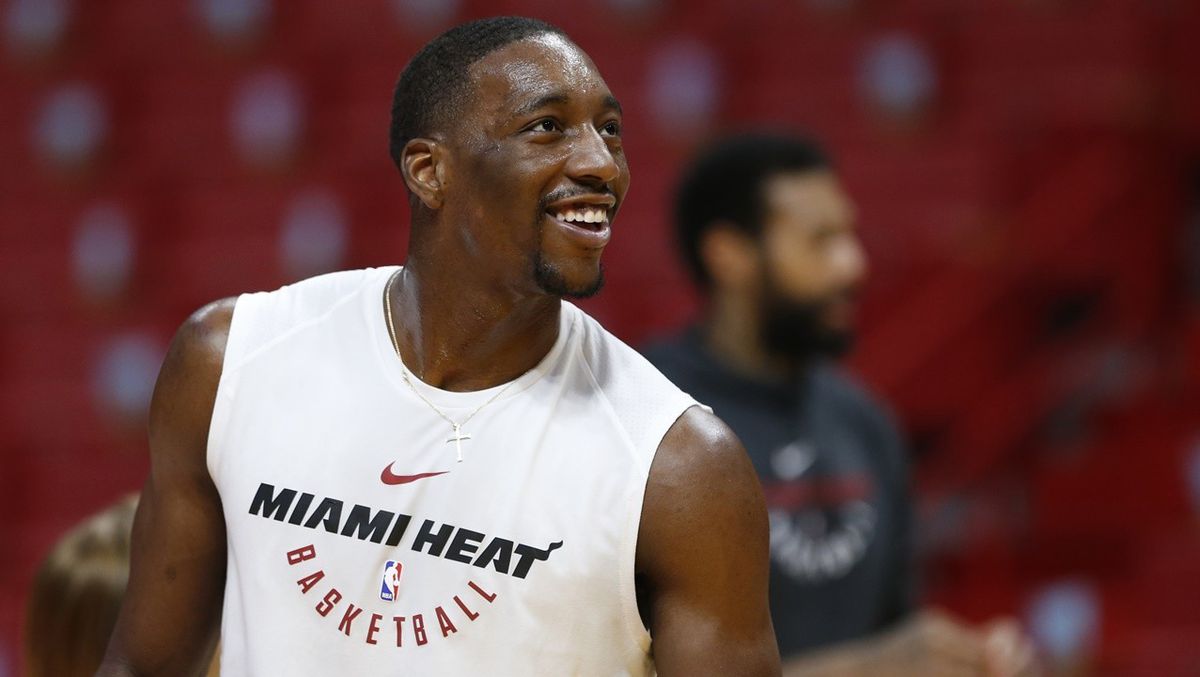 The Miami Heat have shown loyalty to their free agents this offseason after signing veteran point guard Goran Dragic and forward Meyers Leonard to new deals despite the fact that their main goal is to make a splash in free agency next year. The Heat also made sure that Bam Adebayo is not going anywhere anytime soon after agreeing to a long-term extension with the budding star forward.

According to NBA insider Shams Charania of The Athletic, Adebayo agreed to a five-year maximum contract extension worth $163 million. Adebayo's agent, Alex Saratsis, told ESPNthat the contract also includes escalator clauses, which could eventually raise the deal total to $195 million in the next five seasons. Adebayo's deal is reportedly the richest contract the Heat have offered to a player, overtaking the $141 million deal of Jimmy Butler.

While most experts expected the Heat to be conservative in spending this offseason, the deal did not come as a huge surprise because Adebayo is coming off the best season of his career. After averaging just 8.9 points during his second season in the league, the 23-year-old forward took his game to another level last season, posting career-highs 15.9 points, 10.2 rebounds, 5.1 assists, and 1.3 blocks per game.

The Heat could have waited until next year to offer a new deal to Adebayo to keep their cap flexibility for the 2021 free agency, where they are expected to target Giannis Antetokounmpo. The Adebayo extension will limit the cap space of Miami unless they make moves before next year's free agency. But according to Barry Jackson of the Miami Herald, locking Adebayo up to a long-term deal made them a more attractive destination for Antetokounmpo.

"By the way, someone who knows Giannis well told me Giannis would be more impressed by Heat extending Bam than by making Bam wait a year for his money to get Giannis more easily," Jackson said. "Bam and Giannis are friends. All eyes now  turn to whether Giannis agrees to max extension from Bucks."

Antetokounmpo and Adebayo share the same agent, which raised speculation that the Giannis-to-Miami scenario is now dead because the Bucks superstar is also about to sign a contract extension with Milwaukee. However, one Eastern Conference executive believes that it is still highly likely. And if the problem is the cap room, the executive pointed out that the Heat have proven time and again that they can get things done.

"If Giannis wants to go to Miami, he will find a way to get to Miami," the executive told Hoopshype. "I think, if anything, they want to keep that agent happy, and if he wants Bam extended, you do it. Miami has always been creative in finding ways to get things done. The bottom line is you have to do right by your players first. He’s not in a position to risk injury and could affect how he feels about the team long-term if they do not take care of him now."

According to the report, the Heat could either strike a trade for Giannis before the trade deadline next season or arrange a sign-and-trade agreement with the Bucks in next year's free agency. It can be remembered that Miami also had no max cap space last year, but they found a way to acquire Butler via a sign-and-trade deal. The Heat have the assets to make it work for Giannis, and also an attractive core to entire the Greek superstar.

As for Adebayo, the former Kentucky standout admitted that he felt relieved that his future is now secured. The All-Star forward said that he has numerous talks with Heat president Pat Riley about his future, and he is convinced that Miami is the perfect place for him. While he has already secured a long-term contract, Adebayo vowed that he still has no room for complacency, as he is eager to repay the trust of the franchise in him.

New Orleans Pelicans forward Brandon Ingram is officially out of the free-agency market after agreeing to a new deal with his team. Ingram is tagged as the second-best free agent this offseason next to Anthony Davis of the Los Angeles Lakers. But like Davis, there is little to no doubt that he will be signing a new deal with his current team, and it was just a matter of when, and not if.

According to Adrian Wojnarowski of ESPN, Ingram inked a five-year deal worth $158 million with the Pelicans, as confirmed by agents Jeff Schwartz and Jordan Gertler. Ingram, who was moved to the Pelicans as part of the trade that sent Davis to the Lakers, had a chance to sign a new contract last season, but the two sides did not find a mutual ground, as the rising star was coming off an injury.

Ingram opted to bet on himself and it paid off for the 23-year-old forward. The former Duke University standout averaged career-highs 23.8 points, 6.1 rebounds, and 4.2 assists per game. His three-point shooting also became a weapon for him, as he knocked down 39.1 percent of his attempts from beyond the arc. With his increased productions, Ingram earned his first All-Star appearance and was named as the 2020 NBA Most Improved Player.

According to Pelicans beat writer Will Guillory of The Athletic, the new deal for Ingram secured a co-star for Zion Williamson, who is expected to be the face of the franchise in the near future. Danny Leroux of The Athletic thinks that Ingram deserved the max deal that he got from the Pelicans because of the significant improvements he showed last season, particularly with his shooting.

"Ingram's dramatic shooting improvement with the Pelicans made his max contract entirely unsurprising and well-deserved," Leroux said. "He made 39 percent of his threes while taking 6.2 per game, more than twice his attempt rate on the Lakers. As an efficient offensive forward, Ingram would have had a market at the 25 percent max if the Pelicans tried to play hardball."

New Orleans is having a busy offseason in the hopes of making the playoffs next season. The Pelicans recently traded Jrue Holiday to the Milwaukee Bucks via a four-team deal, where they acquired veterans Eric Bledsoe and Steven Adams to bolster their roster. Shortly after the trade was finalized, the Pelicans signed Adams to a two-year, $35 million extension, per Zach Lowe of ESPN.

Meanwhile, the Los Angeles Lakers will have veterans Kentavious Caldwell-Pope and Markieff Morris back for their title defense next season. The deal came as a relief to the Lakers, who have lost several players from their championship team in free agency. Rajon Rondo moved to the Atlanta Hawks, Dwight Howard signed with the Philadelphia 76ers, Avery Bradley joined the Miami Heat, while Danny Green was traded to the OKC Thunder.

According to Broderick Turner of Los Angeles Times, Caldwell-Pope accepted a three-year deal worth $40 million from the Lakers. KCP was a huge factor for the Lakers last season, making impact with his perimeter defense and three-point shooting. During their title run, the 27-year-old guard was usually their third-best player behind LeBron James and Anthony Davis, as he posted 10.7 points in 21 playoff games.

On the other hand, Morris confirmed through his Twitteraccount that he will be returning to the Lakers next season. Terms of the deal were not disclosed, but multiple reports confirmed that Morris accepted a veteran minimum exception. The 31-year-old forward signed with the Lakers before midway through the season, and posted 5.3 points in 14 games. During the playoffs, the nine-year veteran averaged 5.9 points and 3.0 rebounds for Los Angeles.

The Lakers are having a big offseason despite losing role players from their championship team last season. Los Angeles shored up their backcourt by acquiring Dennis Schroder from the Thunder and signing veteran Wesley Matthews in free agency. The Lakers also signed deals with Montrezl Harrell and Marc Gasol, who are expected to play big roles for the team after losing Howard and JaVale McGee, who was traded to the Cleveland Cavaliers.

The Lakers are also expected to strike a deal with Davis, who did not even bother talking to other teams in free agency. Davis and his camp are reportedly considering several options for his next contract, and it would all depend on the moves the Lakers made this offseason. Davis had a huge year for the Lakers last season, as he averaged 26.1 points and 9.3 rebounds on top of 3.2 assists, 2.3 blocks, and 1.5 steals per game.