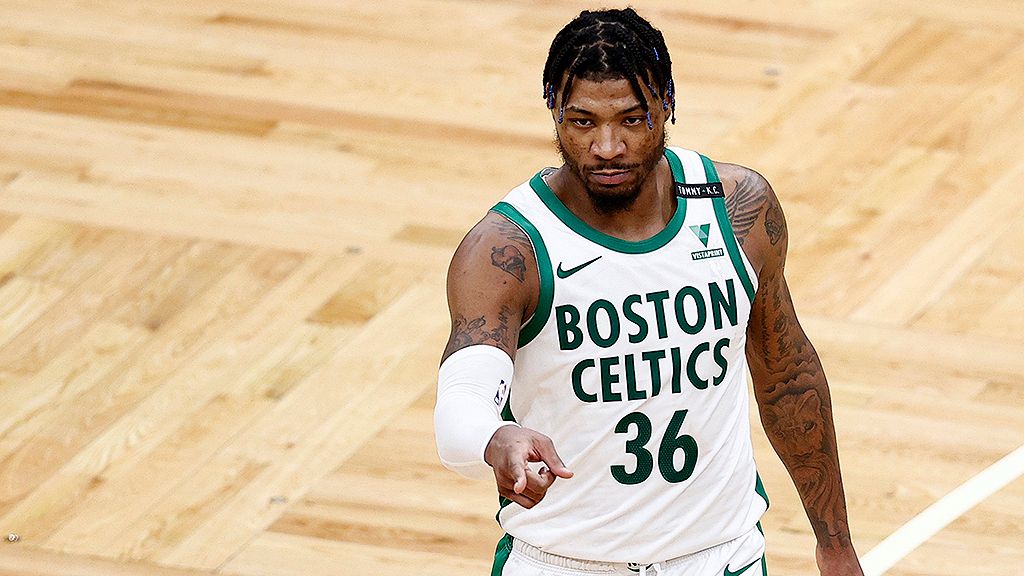 Marcus Smart is here to stay with the Boston Celtics. The defensive-minded combo guard has re-signed with the Celtics via a four-year, $77 million contract extension, as reported by ESPN Senior NBA Insider Adrian Wojnarowski. Wojnarowski also reported that the extension will kick in during the 2022-23 season, although the deal did not include a player option in the final year.

Smart, who turned 27 years of age last March, is coming off a career-best season in which he put up an all-around stat line of 13.1 points, 3.5 rebounds, 5,7 assists, 1.5 steals, and 0.5 blocks per contest. He also logged in 32.9 minutes per game for the Celtics last season, which was his highest in the seven years that he has been in the league. His three-point shooting percentage was a bit off last season, but it is without a doubt that he showed the full repertoire.

Still, a lot of people think that the contract extension did not do Smart enough justice. Stephen A. Smith sounded off on the development, saying that the Celtics guard deserve more money for what he brings to the table. Smith reiterated that Smart should not get less than $20 million every year, especially considering that he is one of the best defenders in the NBA (h/t Nick Ross of NBC Sports Boston).

“There is no way that Marcus Smart should be getting less than $20 million a year,” Smith said. "That's right. You didn't expect that, did you? You thought I was going to go off the other way and say he was overpaid. Marcus Smart is a starter on a perennial playoff team, a seven- year veteran, 27 years of age, a former first-round draft pick and most importantly, one of the elite defenders in the game of basketball. And he’s getting less than $20 million a year in today’s NBA economy?

“I know, this was the max he could get, and I understand that. But hear this: Ain’t no way a player of Smart’s skill set should get this kind of  contract in today’s game. And don’t tell me about his struggles shooting the ball. Not when Ben Simmons is making over $35 million a year; I don’t want to hear that. Brad Stevens and the Celtics did very well for themselves with this deal. There ain't no way Celtics fans should be complaining about this contract.”

Smart, who stands at 6-foot-4, was the sixth overall pick in the 2014 NBA Draft. Even while playing college ball for the Oklahoma State Cowboys, Smart developed a reputation as a tough-minded wing defender who can also make plays for his teammates when needed. As he transitioned to the NBA, his defense eventually translated and he established himself as one of the elite positionless defensive players in the league.

Smart made it to the NBA All-Rookie Second Team in 2015, and was named to the NBA All-Defensive First Team in 2019 and 2020. He has been a fixture in the Celtics roster, a line-up that has changed a lot in the past several years. During his rookie year, Smart already started in 38 games, averaging a stat line of 7.8 points, 3.3 rebounds, 3.1 assists, and 1.5 steals per contest.

Even if he does not score a lot or is not prioritized as the focal point of the offense, Smart has developed an identity as the glue guy of the Celtics for years now. With his tenacious defense, he can guard almost all positions and he brings in the energy and hustle that have proven to be of utmost value to every successful team in the NBA.

As per Chad Finn of Boston Globe, he pointed out some reasons why he thinks that Celtics fans should be happy that Smart is staying with the team for the years to come. Finn said that Smart’s willingness to leave everything on the floor when he is in the game is the type of player that a championship-chasing squad like the Celtics need to go on a deep postseason run. The team’s two top stars are still relatively young, and they need someone like Smart to provide energy and hustle on both ends of the floor.

He is a dogged defender who has made first-team All-Defense twice, probably the Celtics’ best playmaker (and undeniably their best alley-oop passer), and has highlights all over YouTube of huge plays he’s made late in games, most notably when he drove James Harden temporarily insane in the final seconds of a win over the Rockets in 2017. Smart is the kind of player Red Auerbach would have loved, the kind of player he would have plotted to get into green. Smart is a modern amalgam of defensive-menace Celtics guards of the past, guards Red brought here. There’s a lot of K.C. Jones in his game, a little bit of Don Chaney, a touch of Dennis Johnson.

He is not dynamic or efficient enough on offense to be the third-best    player on a championship-caliber team, but is the kind of anything-to-win player who tends to end up on championship rosters. Contrary to the usual uninformed sports-radio caterwauling, his contract extension does not hamstring the Celtics in their pursuit of another star to join Jayson Tatum and Jaylen Brown. It just makes it more likely that the addition comes via trade, especially with the Celtics picking up a $17.1 million trade exception Tuesday when Evan Fournier’s deal to the Knicks was completed. Signing Smart to this deal is a far better option than letting another high-end player leave during free agency.

But of course, Smart and the Celtics have a lot of work left to do. They ushered in a new era when long-time front office executive Danny Ainge stepped down from his role, paving the way for former head coach Brad Stevens to assume the position of president of basketball operations for the team. For his vacated head coaching role, the Celtics then decided to bring in Ime Udoka, a former player who eventually transitioned to become an assistant coach for teams such as the San Antonio Spurs, the Philadelphia 76ers, and the Brooklyn Nets.

From the perspective of their roster, bringing back Smart will certainly bode well for the team’s familiarity and chemistry. Jayson Tatum and Jaylen Brown will still be their focal point moving forward, but the Celtics also acquired a couple of players in free agency this summer. Their most recent acquisition is Dennis Schroder, a scoring point guard who carved a niche as a spitfire gunner in the league.

The Celtics also managed to bring back veteran center Al Horford, who spent last season playing for the Oklahoma City Thunder. Horford, a former All-Star, did not play much for the Thunder as the rebuilding franchise opted to give more playing time to their younger players. On top of that, the Celtics also nabbed the likes of veteran big man Enes Kanter, combo guard Josh Richardson, and defensive-oriented point guard Kris Dunn to provide more experience to the team.

The team can also look forward to the continuous development of their young players like athletic center Robert Williams, sweet-shooting small forward Aaron Nesmith, incoming sophomore point guard Payton Pritchard, and even talented shooting guard Romeo Langford. As per a column written by Justin Quinn of USA TODAY’s Celtics Wire, he talked about the changes that the franchise made in the aspects of their management, coaching staff, and player line-ups.

“We want to be a good team. I think that we’ve been fortunate to add some guys that can really play. I think that that’s a positive, and I think that we’re in a good position from the big picture standpoint. I think that last year, with all that all the different injuries and the uniqueness of  the season, the quick turnaround, I do think that team last year was probably a little better than we played. Obviously, we improved our coaching, and we added a couple of really good players.

I think one of the things that Danny always did a really good job of is he didn’t ever try to put a ceiling on us. I would never try to do that with  this year’s group. But, we certainly feel good about the group as we head into the year, barring any unforeseen changes, and are looking forward to also what we’re going to be able to do down the road. Most of most tweaks would be around the edges via potential moves, but there’s nothing imminent, and there’s nothing that I think is there’s a certainty by any means. We’ll continue to monitor that and discuss those things as we go through the next few weeks, and then we’ll continue to monitor that as we go through the first part of the season.”

But then again, the Celtics will again be facing a tough road if they want to make a deeper run in the playoffs. The Brooklyn Nets still have Kevin Durant, James Harden, and Kyrie Irving, the defending champs Milwaukee Bucks are coming off a successful title run and will be fielding in their star trio of Giannis Antetokounmpo, Khris Middleton, and Jrue Holiday.

There is also the Miami Heat, who just bagged the services of Kyle Lowry and re-signed Victor Oladipo, who is aiming to prove that he is still a star-caliber shooting guard when he becomes fully healthy.