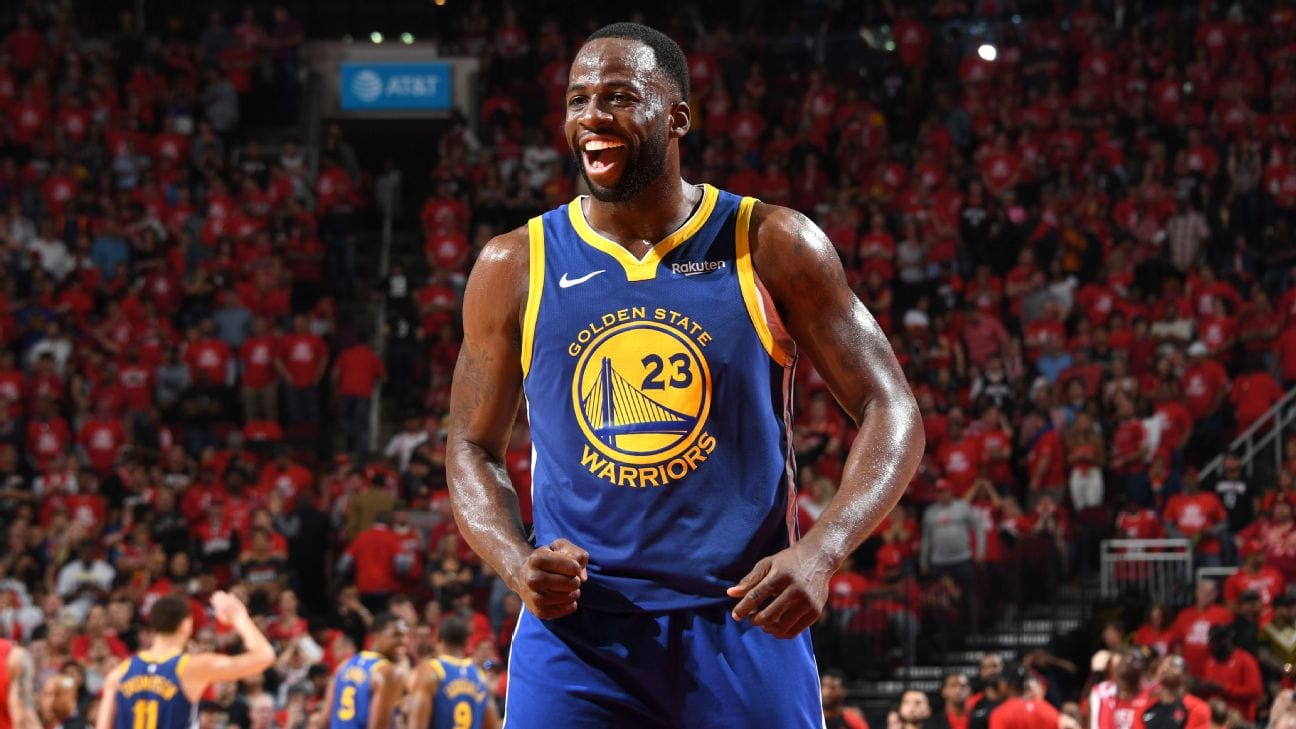 After bowing out of playoff contention when they lost an overtime heartbreaker to Ja Morant and the Memphis Grizzlies during the 2021 NBA Play-In Tournament, Draymond Green and the Golden State Warriors are already looking forward to a stronger version of themselves next season.

But of course, the road would not be easy for the Warriors. Their stars, Draymond, Steph Curry and Klay Thompson, are all in their 30s. Their championship window is quickly closing, and it is expected that the team will go all-in for a potential title run next season. Klay is coming back from a major injury, and there is no doubt that Steph and Draymond will again put up masterful displays of brilliance each and every night.

But needless to say, the Warriors are facing a pivotal offseason. With an aging core and a bunch of young guys that need more time for development, the team could face some kind of crossroads in making personnel decisions in the next several months. As per Marcus White of NBC Sports Bay Area, Draymond reiterated his desire to become “extremely involved” in the Warriors’ roster decisions in the summer.

Draymond says that he and the rest of the organization have to go dig deep in figuring out the strengths and weaknesses of their roster, and move forward from there. It is the second consecutive year that the Warriors did not make it to the playoffs, which is somewhat difficult to absorb considering how they dominated the league in previous years prior to their current playoff drought.

There are some things that need to be discussed between myself, Steph, Klay, [the coaching staff], front office. This has always been a group thing. We've always done it all together, and this summer it's extremely important that we do sit down, go back to the drawing board as one if we're going back to where it is that we want to go. Those conversations has to be had, and I'm looking forward to having 'em."

The Warriors, who missed the services of Klay Thompson the whole year, finished the current NBA season with a record of 39 wins against 33 defeats. They were positioned in the 8th spot in the stacked Western Conference standings, forging a play-in date with LeBron James and the 7th-seeded Los Angeles Lakers. But the Dubs lost a close game to the Lakers via a difficult game-winning triple from no other than James himself.

Even without Klay’s elite presence on both ends of the floor, it is true that the Warriors were still able to play a great style of basketball this season. They finished the season ranked 12th in total points per game (113.7 points), 1stin total assists per game (27.7 assists), 3rd in three-pointers made per game (14.6 triples), and 9th in overall three-point percentage (37%).

On the defensive end of the floor, the Warriors ranked 6th in total steals per game (8.2 steals), and 17th in total blocks per game (4.8 blocks). However, it is the team’s high count of turnovers per game that spelled their doom, especially in their recent play-in loss to the Grizzlies. The Warriors turned the ball over 15.0 times this season, which is the 5th-highest turnover count in the league.

Still, the loss to Morant and the Grizzlies should be a hard pill to swallow. As per Nick Friedell of ESPN, Warriors head coach Steve Kerr described it as a “crushing way to go out.” Kerr described the team’s last two games against the Lakers and the Grizzlies as “gut punches,” although he also reiterated that the success that they have achieved this season is something that they can build up on moving forward.

Kerr said that while it is true that they failed to book a coveted ticket to the Western Conference playoffs, the team has to look at the fact that they exceeded even the loftiest expectations that people placed on them prior to the season. The Warriors only recorded 15 wins last year, and to bounce back from that disappointment with a 39-win season is already an achievement in itself, especially with all the injuries that they had to endure the whole year.

"Obviously a crushing way to go out. Two straight games that were basically gut punches. We felt like we had control of the game the other night and lost and then really didn't have the control of this one but could have won. We had the last shot in regulation. The ball just didn't go our way, but we've had a lot of great breaks over here over the years and a lot of bad ones the last couple years, with injuries especially. All in all you have to look at this season as a success and something to build on.

This is very unfamiliar territory obviously with the play-in, this being the end of the season. A very tough way to end it with these last two games coming down to the wire and us giving it everything we had in the tank. I'm proud of  every single person in the Oakland uniform tonight, all season. From 15 wins last year, injuries and all that, to what we made out of this year -- it's pretty damn impressive. It's a very tough way to go out, and we would love to be playing on Sunday, but you can't lose sight of the big picture in terms of where people had us at the beginning of the season."

As for Draymond’s value to the team, it is without a doubt that his all-around presence this season just shows how much of a catalyst he is for this Warriors squad. Draymond finished the season with a tremendous all-around stat line of 7.0 points, 7.1 rebounds, 8.9 assists, 1.7 steals and 0.8 blocks per contest.

He was also able to stay healthy for the most part of the season. Draymond appeared in 63 games for the Warriors this season, and logged in 31.5 minutes per game. His excellent work as a playmaking big man on offense and defensive anchor on the other end of the floor was a testament to how the Warriors look up to him as their leader.

Of course, Draymond’s tremendous body of work this season did not go unnoticed. The 31-year-old All-Star combo big man was named as one of the finalists for this year’s Defensive Player of the Year plum. Draymond already won that award during the 2016-17 NBA season, when he also led the league in steals per game. He and the Warriors went on to win the championship that same year, beating LeBron James and the Cleveland Cavaliers in the Finals.

So it is only rightful to know how Draymond thinks of the DPOY race this season. As per Sam Amick of The Athletic, Draymond emphasized that people cannot just look at the box score when dissecting an individual’s performance on the defensive end of the floor. Draymond reiterated the fact that defense is also about knowing the opponents’ offensive schemes, knowing where to direct your teammates to cover bases and cuts, and knowing where to position yourself to be able to switch effectively in multiple scenarios.

But of course, it is clear to a lot of people that while it’s true that Draymond is the catalyst of this Warriors squad, Curry is its best and most valuable player. The two-time Most Valuable Player and three-time NBA champion put up stellar averages of 32.0 points, 5.5 rebounds, 5.8 assists, and 1.2 steals per game this season, including excellent shooting percentages of 48% overall clip from the field, a 42% clip from the three-point line, and a 91% clip from the free throw line.

Curry also won the scoring title this season, beating Washington Wizards star Bradley Beal for the award. Curry just turned 33 years of age last March, but it seems like he is just coming off a career-best season. It is indeed amazing how elite of a level Curry is performing at this stage of his career.

But more than the extraordinary scoring and the shooting that Curry exhibited this season, Draymond points out to how great and unique of a leader his superstar teammate is. Draymond says that even though the team fielded in a lot of young and inexperienced players this season, Curry never complained and even took it upon himself to carry the team.

In the same column that Amick wrote for The Athletic, Draymond went on to say that Curry’s leadership is as unique as it can be. It allowed the team’s young guns to develop over time, and at the same time learn from Curry’s tremendous work ethic and attitude.

“I think who he’s been on the court is a true testament to who Steph Curry is. You know, the reality is that we have a very, very young team — and a very inexperienced team. And most guys in Steph Curry’s shoes, (being) the star that he is, would go completely ape shit, would be extremely disgruntled in the media, and would talk about how much (the situation) pisses the veterans off and curses their chances to win a championship. (But) you haven’t heard a single peep from him on that. Well, the reality is that in playing with him and going to work with him every day, you have not felt a single (bit) of that. And that is a true testament to who he is, his character and his leadership.

‘No matter what hand I’m dealt, I’m going to go be the best Steph Curry I can be.’ And because he has gone on to be the best Steph Curry that he can be, it allows all of these young guys to A) Fall in line and have something to follow, and B) Time and confidence to grow. So now, where you’re seeing — I think I just read we’ve won 13 out of 18 games, four in a row. And all of a sudden, it’s gone from, ‘Man, will they get into the play-in tournament?’ to possibly sitting here at eighth. And the road could have been completely different.”

Along with the returning Klay Thompson, Steph and Draymond will still anchor the Warriors’ point of attack next season. The steady growth of Andrew Wiggins on both ends of the floor this season will certainly be a huge step moving forward, although it remains to be seen if they can still secure the services of lefty combo wing Kelly Oubre Jr. Oubre will be a free agent this summer, and signs point towards a hefty paycheck for the defensive forward, something that the Warriors would not be able to afford.

Golden State is also pinning their hopes on the development of James Wiseman, who is coming off a decent but injury-plagued rookie year. Jordan Poole’s shooting and scoring will definitely secure him of more playing time off the bench next season, while versatile forwards Kent Bazemore and Juan Toscano-Anderson could also be holdovers for the team for the next season.