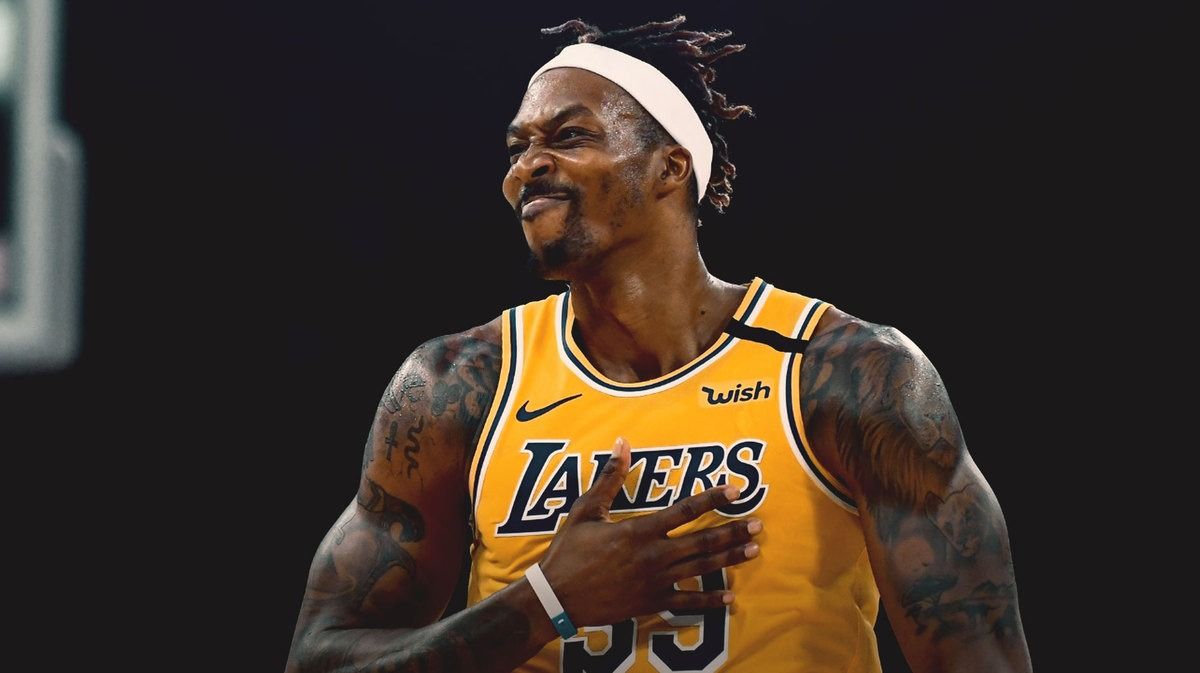 The Golden State Warriors are expected to go all out next season after a disappointing year. With that in mind, the Warriors are likely to be very active in free agency and on the trade front in the hopes of reclaiming their status as the best team in the stacked Western Conference. The Warriors are keeping their cards close to their chest, but it is no secret that they would make moves in the offseason.

According to Anthony Slater of The Athletic, the Warriors should strongly consider signing veteran big man Dwight Howard. The 34-year-old center will not turn heads with his numbers this season for the Los Angeles Lakers, but his impact in Los Angeles is undeniable. Howard played a key role in their success in the regular season and was also a big factor in Los Angeles' series win over the Denver Nuggets in the Western Conference Finals.

Slater pointed out that if there is something the Warriors should know based on how the Western Conference Playoffs played out, it is the fact that they need a solid big man. They need someone to make life difficult for star big men like Anthony Davis of the Los Angeles Lakers, Nikola Jokic of the Denver Nuggets, Kristaps Porzingis of the Dallas Mavericks, and even Ivica Zubac of the Los Angeles Clippers.

"Dwight Howard. He’s finally flushed out the demand for post-ups and embraced his role as a high-energy big who rebounds, irritates opposing bigs and crushes lobs," Slater said. "Do I think he could have an effect against a Jokic in a playoff series? Yes. It’s happening as we speak."

The Lakers are expected to try hard to keep Howard when he hits free agency in the offseason, especially if they win the title this year. Because of his resurgence, Howard might come a little expensive than his current $2.54 million contract this season. Slater thinks that the Warriors would also appeal to Howard, especially if they can promise a starting role to the former first-overall pick.

"The Lakers will probably attempt to retain him, but it could cost. Howard was on  the minimum this season and other contenders, seeing what type of role acceptance and impact he’s having on the biggest stage, would likely bump his market value into at least the mini mid-level range," Slater said. "Could the Warriors lure him away with an offer to be the unquestioned starter?"

If they fail to land a big man in free agency or trades, the Warriors have a chance to address the need in the 2020 NBA Draft. By finishing with the worst record in the league this season, Golden State secured the second overall pick in the draft. They will likely have a chance to draft 7-foot big man James Wiseman, who has tantalizing physical attributes because of his 7-foot-6 wingspan and 9-foot-6 standing reach.

Wiseman could bring ring protection to Golden State next season, but the 19-year-old rookie might not be the answer when they face the top bigs in the playoffs. But regardless of how they will address it, the Warriors are more than likely to add a solid big man. Golden State coach Steve Kerr recently admitted that while small ball is making a lot of noise, teams still need a big guy if they want to win.

"I think the teams that are having success in the playoffs all seem to have that threat from the top of the circle, whether it’s Bam Adebayo. Toronto had it with Marc Gasol. Boston, you know, (Daniel) Theis has played well. The Lakers, they’re probably the biggest team in the league. It’s an interesting point you bring up. Small ball has taken over and yet you still have to have big guys to win," Kerr said.

Danilo Gallinari will be one of the players to watch when the 2020 NBA Free Agency period begins. The veteran forward will be an unrestricted free agent after playing out the final year of his contract with the Oklahoma City Thunder. The Thunder have already expressed interest in keeping Gallinari, but the 32-year-old forward will likely listen to several suitors before making a decision.

According to Nick Crain of Forbes, Gallinari is reportedly keeping his options open. It remains to be seen whether or not the former sixth overall pick will look to prioritize a team with cap space but has less chance of winning a title to get what could be the final big paycheck of his career, or sign with a contender to have an opportunity to add a NBA championship to his resume.

"It certainly seems like he is open to exploring all options. He didn't give any indications to whether he is leaning towards playing for a contender or helping a rebuilding team," Crain said. "For a guy of his age, it would make sense if he wanted one more shot at winning his first ring, but on the flip side it may be his last big contract in the NBA."

If Gallinari decides to sign with a contender, it would certainly need to be done through a sign-and-trade. The sign-and-trade scenario would be beneficial to Oklahoma City, as it will give them assets in return instead of losing him for nothing if he decides to sign with a team outright. The Thunder have been collecting future assets, as part of their plan to rebuild in the next several years.

In the event Gallinari opts to sign with a contender, Dan Favale of Bleacher Reportbelieves that the Los Angeles Lakers are a dark horse in the race to acquire the sweet-shooting forward. Favale suggested a possible package that could appeal to the Thunder, who are also likely to deal veteran point guard Chris Paul if they find a taker for his expensive $85.56 million contract in the next two seasons.

"A package assembled around Bradley, McGee and Quinn Cook (non-guaranteed) would let the Lakers start Gallinari at around $17.2 million. They can drive up that  number by dealing the No. 28 pick as an actual salary, including yet another player or subbing in KCP’s money for anyone," Favale said. "Is this enough to get the Thunder to bite? Debatable. It is definitely more appealing if they’re saving immediate cash in any eventual Chris Paul trade."

Gallinari, who was sent to the Thunder in the blockbuster deal that brought superstar forward Paul George to the Los Angeles Clippers last year, is coming off a strong season for the overachieving Thunder. He posted 18.7 points and 5.2 rebounds in 62 regular season games, and was instrumental in Oklahoma City's fifth-place finish in the Western Conference standings in the regular season.

Jerami Grant to Become a Free Agent in the Offseason

Jerami Grant made a name for himself with his impressive performance for the Denver Nuggets in the 2020 NBA Playoffs. His excellent showing came at the perfect time for Grant, as he could become a free agent after the current season if he opts out of the final year of his contract. And after turning heads in the postseason, it is now a forgone conclusion that he will decide to test the market, knowing that his value skyrocketed in the past two months.

According to Mike Singer of The Denver Post, Grant could command from $14 million to $16 million per year from interested teams. The Nuggets will have Paul Millsap off their books as well if they decide not to re-sign him in free agency. Retaining Grant would be easier said than done for the Nuggets, but Singer insisted that the two parties have mutual interest in extending the rising star's stay in Mile High city.

"The Nuggets have long signaled that they want Grant to be part of their long-term future, especially with Millsap’s imminent free agency," Singer said. "It’s just a matter of finding the right deal. Not only do the Nuggets love Grant professionally, his age (26) fits their trajectory. Even dating back to last summer’s introductory news conference, Connelly said he hoped Grant would be in Denver for years."

The 26-year-old forward averaged 12.0 points and 3.5 rebounds for the Nuggets during the regular season. But in their Western Conference Finals showdown against the Los Angeles Lakers, the former Syracuse standout posted 15.8 points and 3.6 rebounds per game, and also showed his defensive prowess.

Head coach Mike Malone has also indicated that they he wants to keep their core intact in the years to come. Grant is considered as a vital piece in Denver's future along with Nikola Jokic, Jamal Murray, Garry Harris, Monte Morris, Will Barton, and Michael Porter Jr. After losing to the Lakers in the conference finals, Malone remained ecstatic about the future of their franchise.

"I think we have something special brewing," Malone said. "And I think most importantly, I think people around this country, around the world, who were watching the playoffs, this group of guys, you would be hard pressed to find a better story coming out of this bubble. A bunch of young kids faced elimination, looked it in the face and just kept on surviving and advancing."

Before losing the Lakers, the Nuggets eliminated the title favorites Los Angeles Clippers in the second round of the playoffs, doing it by erasing a 3-1 deficit in the series. The Nuggets also came back from the same deficit during their first-round matchup against the Utah Jazz.