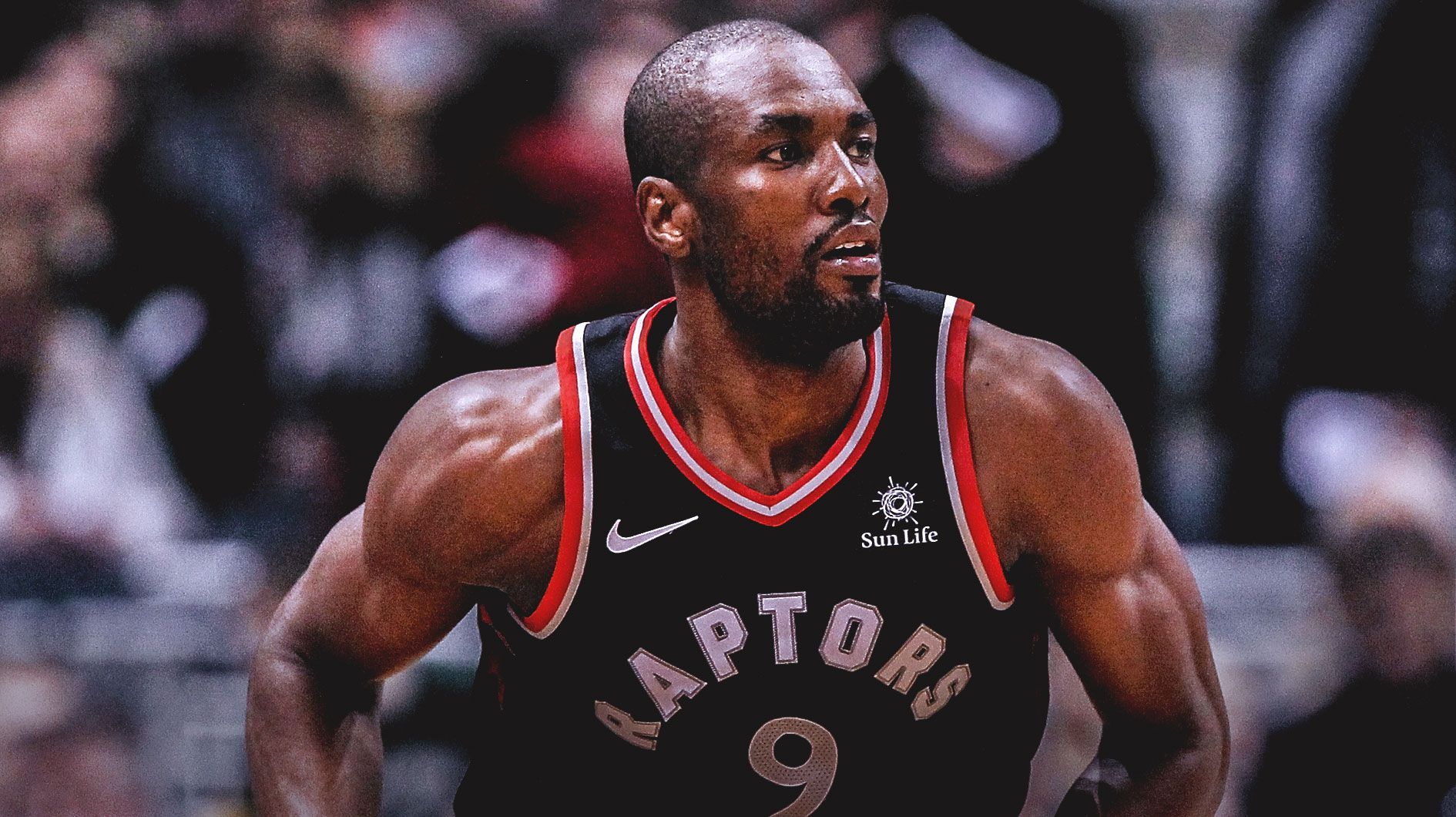 The Golden State Warriors are expected to become very active in free agency and on the trade front this offseason. The Warriors ended up with the worst record in the league last season, but it was mainly due to the departure of Kevin Durant and injuries to superstars Klay Thompson and Steph Curry. The Warriors are already being linked to potential targets, who are mostly players who can address their needs on the frontcourt.

If Warriors legend Rick Barry will have it his way, he would convince the Warriors to sign Toronto Raptors forward Serge Ibaka in free agency. Ibaka will become free to test the market when the free-agency period begins. Barry said that the veteran forward is exactly the type of big man the Warriors need because he can protect the rim and shoot from beyond the arc, which is one of the staples of the Warriors system.

"The guy that I'd like to see them get, it would be unbelievable, I love Serge Ibaka,"Barry said. "He can shoot the three, he can rebound, block shots. That would be a heckuva addition to this team."

The 31-year-old forward is coming off another productive seasons for the Raptors. While he mostly came off the bench last season, Ibaka managed to average 15.4 points on 51.2 percent shooting from the field, including a 38.5 percent clip from beyond the arc, to go along with 8.2 rebounds per game. In his 11-year career in the league, he averaged 2.1 blocks per game.

The Warriors are in dire need of a solid option at center. Golden State actually has a chance to address the need for a big man in the 2020 NBA Draft. They own the second pick in the draft, which they can eventually use to select center prospect James Wiseman. However, Barry pointed out that there is no player who has a sure-fire superstar potential in the draft, which is why getting a veteran like Ibaka should be Golden State's priority.

"Why do you want to take somebody that might take 2-3 years, especially a bigger guy, to develop and be able to help you," Barry said. "You got to do it now. You've got three main guys on your team who are not getting any younger. You need to put people on that team with them that can give them a chance to win now. I would rather have a veteran guy than a rookie coming into the league when you don't know what the hell is gonna happen."

However, getting Ibaka might be easier said than done for the Warriors because they do not have enough cap space to tender an expensive offer, which is close to the $23.27 million he earned last season. According to Bobby Marks of ESPN, the Dallas Mavericks and the Portland Trail Blazers are also expected to chase Ibaka. Both teams can only offer their Mid-Level Exception, which could give the Raptors a chance to derail the plan of interested contenders.

"Ibaka should expect to see offers at the $9.3 million midlevel from playoff teams that do not have cap space," Marks said. "Dallas and Portland are possible suitors. The Raptors can preempt or counter that by offering a one-year, $18 million contract with essentially two seasons of money paid in one year, allowing them to preserve cap flexibility in 2021. That would be a win-win."

Preston Ellis of Bleacher Report also reported that Ibaka will likely sign with a contender for less money instead of getting a huge paycheck from a rebuilding team. Ellis said that the Brooklyn Nets are one of the teams to watch out for in the race to get Ibaka. Brooklyn is expected to go all in with Kevin Durant and Kyrie Irving next season. Ellis said that Ibaka could sign with the Nets, citing his relationship with former OKC Thunder teammate Kevin Durant.

"With over $118 million in career earnings, it seems more likely Ibaka would take a pay cut to join a winning culture such as the one in Brooklyn with former teammate Kevin Durant," Ellis said. "The two remain close, with Durant even appearing on Ibaka's cooking show before the 2019-20 season. The Nets are almost certain to pay the tax in 2020-21, leaving them only armed with the taxpayer mid-level exception that should earn Ibaka around six million."

And if the Warriors loses out in the race to sign Ibaka, they have other options in mind. According to Shams Charania of The Athletic, the Dwight Howard and the Los Angeles Lakers have mutual interest in signing a new deal in the offseason but nothing is set in stone because the veteran might get attractive offers elsewhere. Charania said that the Warriors are among the contenders who are expected to reach out to the former superstar.

Monte Poole of NBC Sports Bay Area said last week that signing Howard makes a lot of sense for the Warriors because he could be the answer to their need for a rim protector. Teams were previously discouraged of Howard's antics and behavior, but the 34-year-old reinvented himself last season. The eight-time All-Star averaged 7.5 points and 7.3 rebounds for the Lakers, and was a factor during their successful title run last season.

"Howard accomplished a partial image rehabilitation and has been effective enough to generate leverage from a situation that many initially questioned," Poole said. "If they like what they see and hear, and Howard passes the pertinent tests, the Warriors can address a need without breaking the bank."

Veteran center Marc Gasol has also been mentioned as a possible target for the Warriors. Gasol will be an unrestricted free agent and will likely decide to sign with a contender, as he is already reaching the twilight of his career. Bill Simmons of The Ringer told Zach Lowe of ESPN that Gasol will likely strongly consider taking a huge paycut to join a team like the Warriors.

If the Toronto Raptors lose both free-agent big men Serge Ibaka and Marc Gasol in free agency, their front office are expected to aggressively pursue the top frontcourt players in the market. There will be no shortage of big men in the market, who could play a significant role for Toronto next season.

According to Blake Murphy of The Athletic, the Raptors are a team to watch in the race to sign Detroit Pistons center Christian Wood, who will become an unrestricted free agent this offseason. The Pistons have already made it no secret that their top priority this offseason is to sign Wood to a long-term deal after a huge jump in his production this season for Detroit, as he averaged 13.1 points and 6.3 rebounds per game.

However, re-signing Wood is not a given for the Pistons because they have limited rights on Wood and it remains to be seen how much they are willing to offer to the 25-year-old center. Murphy reported that the Raptors will likely go after Wood as well in the offseason, saying that Toronto's front office already had him on their radar before the 2018-19 NBA season but he opted to sign with the Milwaukee Bucks.

"They had interest in Wood as a two-way player before the 2018-19 season and he  opted to take a partial guarantee with Milwaukee instead," Murphy said. "If the Raptors believe Wood’s growth is more than just “looting in a riot” during an uncompetitive Pistons season, he offers a passable offensive package beyond just being a great roll threat and graded well as an interior defender and two-way rebounder this year."

Murphy added that the Raptors should also consider signing Danilo Gallinari. The veteran forward will become an unrestricted free agent this season and has expressed desire to sign with a contender. He is unlikely to return to the Oklahoma City Thunder, who are expected to go on a rebuild, especially if they find a taker for Chris Paul.

According to Murphy, Gallinari is on top of his wish list for the Raptors. While there are concerns about his health over the past several years, he thinks that the 32-year-old forward would be a valuable weapon for Toronto and might stay healthy if he gets less usage rate. The 11-year veteran averaged 18.7 points on top of 5.2 rebounds and 1.9 assists for the Thunder last season.

"A certain Italian peer of mine has been on the Gallinari train as far back as 2013, and there have been multiple times since when Gallinari looked like a potential fit for the Raptors," Murphy said. "Had the Thunder not been good this year, he would have topped my deadline trade target column for some Ibaka-and-pick type of package. Alas, Canada Basketball South were quite good, providing Gallinari a really nice platform entering free agency."

However, it remains to be seen whether or not Gallinari will consider the Raptors when he makes his decision in the offseason. Since expressing his intention to sign with a contender, the sweet-shooting forward has already been linked to the Los Angeles Lakers, Golden State Warriors, and Miami Heat.