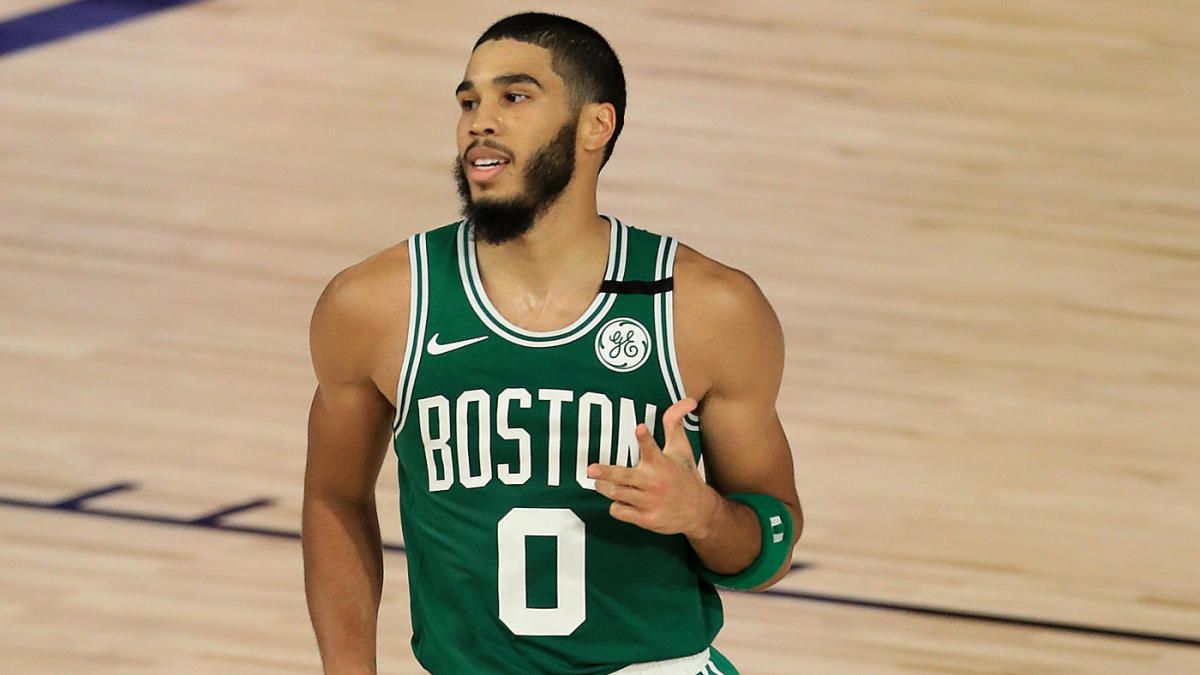 The Boston Celtics have lost several stars over the past several seasons like Kyrie Irving and most recently Gordon Hayward. The Celtics are currently pinning their hopes on their young core led by Jayson Tatum. The Celtics made sure that Tatum is not going anywhere anytime soon after agreeing to a long-term deal with the rising star.

According to Adrian Wojnarowski of ESPN, Tatum agreed to a five-year deal that would pay him at least $195 million in the next five years. The contract earnings could go as a high as $200 million because of the All-NBA escalator clause in the contract. The maximum rookie extension also includes a player option after the fourth year of the deal, which means that Tatum could become a free agent in 2025.

The value of the contract will shoot up if the 22-year-old forward makes it to the All-NBA second or third team next season. But regardless of how much he will earn at least in the next three years with the Celtics, Tatum reiterated that he is committed to the franchise. The former Duke University standout, who was the third overall pick in the 2017 NBA Draft, said that he would love to spend a very long time in Boston.

Tatum is coming off the best season of his young career. He averaged 23.4 points to go along with 7.0 rebounds and 3.0 assists per game for Boston. His excellent showing last season earned him his first All-Star selection and a spot in the All-NBA third team. Celtics president of basketball operations Danny Ainge expressed confidence that Tatum will continue to improve and help the Celtics raise another banner into the rafters.

"Jayson has emerged as one of the best two-way players in the NBA through his first three seasons, and will continue to get better and better as a player and a leader,"Ainge said. "He possesses unique scoring and playmaking abilities, and has displayed exceptional poise and maturity in how he approaches the game. He’s someone who, at 22 years of age, will be a central figure to this organization’s championship aspiration for many years to come."

What the Tatum Deal Means for the Celtics

With Tatum locked up at least in the next five years, the Celtics have already secured the foundation of the franchise with him and fellow young forward Jaylen Brown. Brown agreed to a four-year, $115 million extension with the Celtics last year, giving the Celtics a young duo that has already been to two Eastern Conference Finals in their young career. This is why Jared Weiss of The Athletic thinks that the Tatum extension was a no-brainer.

"The Celtics are entering the third phase of prolonged contention, with Tatum and Brown as the foundation," Weiss said. "There is near-universal agreement across the league that two-way wings are the players teams want to build around, which is pretty well supported when looking at the teams making the NBA Finals. The 22-year-old Tatum is positioned to step into the conversation as the best wing in the NBA over the course of his extension."

Boston was in a strong position to win an NBA title last season after also making big moves last year. They were able to acquire All-Star point guard Kemba Walker, who had an excellent first season in Boston. The Celtics are also oozing with young talents like Grant Williams, Romeo Langford, Robert Williams, and Aaron Nesmith, who was recently selected as the 14th overall pick in the 2020 NBA Draft.

The Celtics also added veteran point guard Jeff Teague for next season. The 32-year-old point signed a one-year contract with Boston after splitting last season with the Minnesota Timberwolves and Atlanta Hawks, respectively. 59 games last season, Teague came off the bench most of the time, posting 10.9 points and 5.2 assists per game. His arrival in Boston could be critical, as he can provide spark in the second unit or even start early in the season while Walker is recovering from his knee injury.

"Teague is a well-known commodity. He can take on a bigger role if Walker needs to miss time, then guide the second unit once Walker’s ready for a full slate of minutes," Jay King of the Athletic reported. "For Boston, having that security blanket could be a big deal. The rapid offseason was bad news for Walker, who could have used more time off to strengthen his knee,"

Aside from Teague, the Celtics also added another veteran, signing former Cleveland Cavaliers forward Tristan Thompson. Multiple reports confirmed that Thompson signed a two-year, $19 million contract with the Celtics through the team's mid-level exception. The veteran center is expected to take the place of Enes Kanter, who was dealt to the Boston Celtics this offseason.

Thompson will be playing for another team for the first time in his career, as he has spent his first nine seasons in the NBA in Cleveland. The 29-year-old is coming off a productive year for the Cavaliers, as he tallied a career-high 12.0 points and 10.1 rebounds per game. Cavaliers beat writer Kelsey Russo of The Athletic thinks that Thompson would be a huge boost to the Celtics in the next two seasons.

"Not only did the Cavs struggle to close out games last season, but they also were not in many tight games. Even so, Thompson’s effort didn’t change, and he worked to use his defensive versatility to change the game," Russo said. "He plays with grit and grind, even on a losing team like the Cavs the past two seasons. So I think Thompson will be able to take that to Boston and see the benefits of his effort."

The former fourth overall pick has also been in a lot of battles during his stay in Cleveland. He has played in four NBA Finals during LeBron James' second run with the team, including a championship in 2016. Russo thinks that Thompson's experience will be critical for the Celtics, who are bannered by a young core led by Jayson Tatum, Jaylen Brown, Kemba Walker, and Marcus Smart.

"He may be best known for his leadership in the locker room," Russo said. "Now, the Celtics aren’t a rebuilding team, but even so, the way Thompson operates will be great for a team with championship aspirations. He comes to work every day and competes every night. He isn’t afraid to get in a teammate’s face when needed, but when it isn’t,  he just works hard and keeps his mouth shut."

The Houston Rockets are entering a new era under new general manager Rafael Stone and new head coach Stephen Silas. The Rockets were known for their small-ball system under Mike D'Antoni, but it appears the franchise is heading into another direction. Houston bolstered their frontcourt this offseason, and will no longer rely solely on 6-foot-5 PJ Tucker for the center position.

The Rockets acquired unrestricted free agent Christian Wood, who reportedly agreed to a three-year, $41 million contract with the Rockets, per Adrian Wojnarowski of ESPN. Wood is one of the best big men on the market this offseason after a strong year with the Detroit Pistons last season. In 62 games with the Pistons, the 25-year-old center averaged 13.1 points and 6.3 rebounds per game.

Wood shone the brightest when he earned a starting role following Detroit's decision to trade Andre Drummond to the Cleveland Cavaliers. In 12 games as a starter, the former UNLV standout posted 21.9 points and 9.4 rebounds per game, shooting 56.0 percent from the field, including an impressive 40.8 percent clip from beyond the arc. With Wood leading their frontcourt, Kelly Iko of The Athletic thinks that the Rockets should have high hopes next season.

"Houston should be high on themselves heading into a new campaign," Iko said. "He was their top target for a reason, showing an ability to impact the game on both ends of the floor and having an incredibly high talent ceiling. Had Wood been with the team following the deadline, their small-ball lineups would have looked deadly. Some bright basketball minds have compared Wood’s addition and potential under Silas to Kristaps Porzingis in Dallas."

Aside from Wood, the Rockets also added DeMarcus Cousins, who signed a one-year deal with Houston. The former All-Star is trying to reestablish himself as one of the best big men in the league after missing the entire 2019-20 NBA season. Cousins was supposed to play for the Los Angeles Lakers last season, but he suffered a torn ACL before the season began. He last played for the Golden State Warriors in 2019, where he averaged 16.3 points in 30 games.