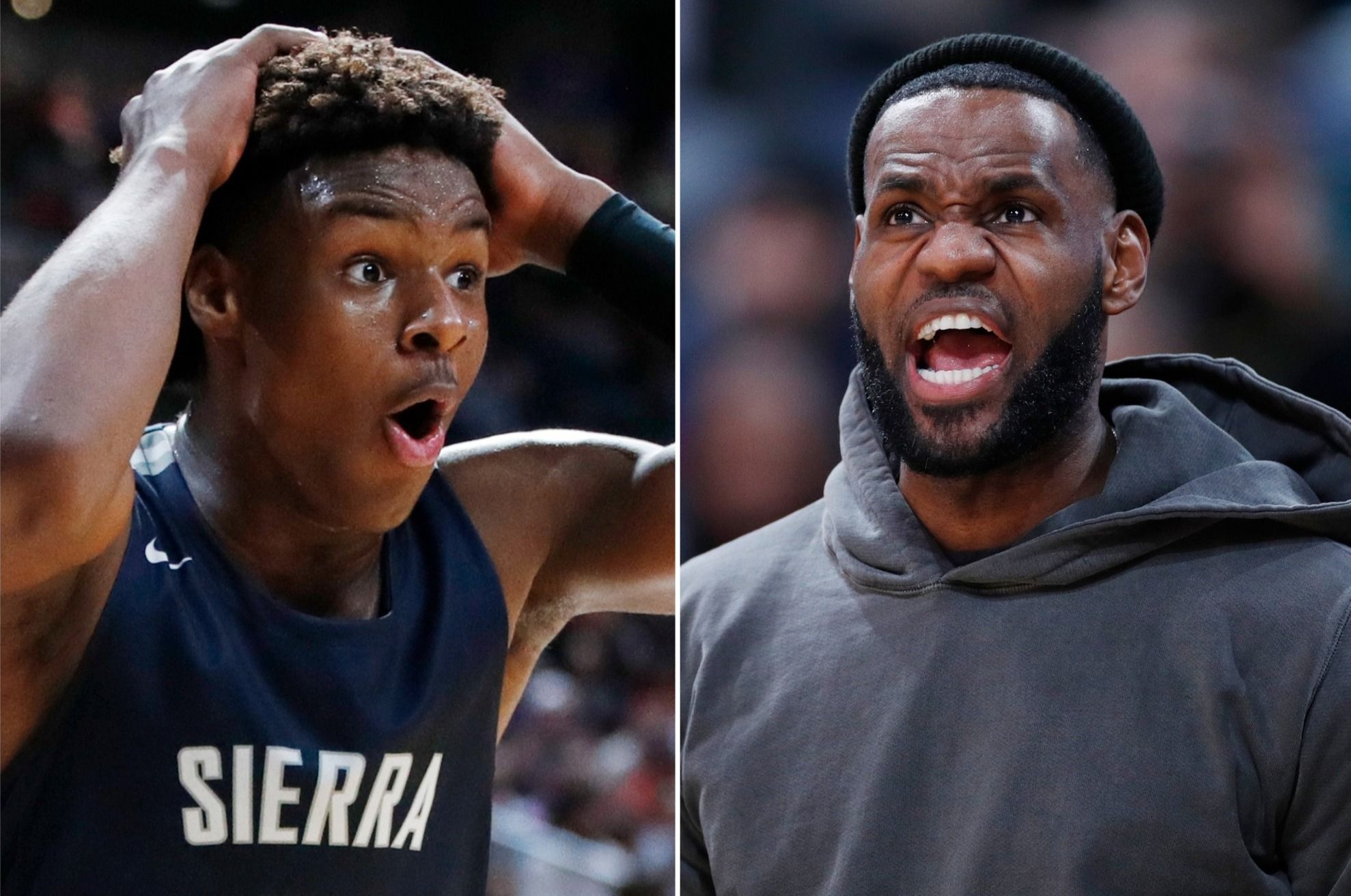 Los Angeles Lakers superstar LeBron James confirmed that his recent contract extension has something to do with achieving his grand plan late in his career. James could have signed a longer extension with the Lakers, but the superstar forward opted to sign a two-year deal to keep his options open once his son becomes eligible to get drafted in the NBA three years from now.

James signed a two-year, $85 million deal with the Lakers, which means that he is guaranteed to play 20 seasons in the NBA. The four-time NBA Most Valuable Player will be 38 when his current contract expires but is expected to still get a lot of attention if he becomes a free agent. However, James is not thinking of it, saying that what excites him is he will get a chance to play alongside his son, Bronny.

"The best thing about it is the year I'll be a free agent will be the same year my oldest  son graduates high school," James said via ESPN. " So I'll have some options to see, for me personally, what I want to do forward, being around my family, being around my son more or continue to play this game I love with great health and great spirits."

Bronny is in his sophomore season at Sierra Canyon High School in California. While it is too early if Bronny would develop into a top NBA prospect, previous reports indicated that there would be strong interest from teams, knowing that drafting him would also mean getting a great chance to acquire LeBron in the final years of his career.

It is worth noting as well that the league is still not allowing high school players to jump straight to the professional ranks, but there are talks that the new collective bargaining agreement will bring changes to the current rules. James went straight from high school to become the first overall pick in 2003, but the NBA decided that players can only apply to be drafted if they have been one-year removed from high school.

But for now, James said that he is focused on the current task at hand, which is to help the Lakers defend their title in the upcoming season. The Lakers won their 17th championship in franchise history last season, while James bagged his fourth. The 16-time NBA All-Star said that defending the title would be easier said than done, knowing that he and the Lakers have big targets on their backs.

James turned heads last season, as he still averaged 25.3 points and 10.2 assists to go along with 7.8 rebounds and 1.2 steals per game despite already being 35 years old. He led the league in assist, and was also named to the All-NBA First Team for the 13th time in his career. He also finished second to Milwaukee Bucks superstar Giannis Antetokounmpo in the Most Valuable Player race last season.

Golden State Warriors superstar Steph Curry remains as one of the most polarizing figures in the NBA and any team would love to have him. However, teams who are looking to get a crack at Curry might have to shift their focus on another player, as the two-time NBA Most Valuable Player does not see himself playing for another franchise.

Curry said that he would love to spend the rest of his playing career with the Warriors, who selected him as the seventh overall pick in the 2009 NBA Draft. The 32-year-old guard said that it would be an accomplishment for him if he would be able to join the list of players who started and played the rest of their careers in one franchise.

"That's a huge goal for sure," Curry said of playing in Golden State for his entire career. "It's an elite club of guys that you look at that have played with the same organization and been successful and achieved greatness in that respect. So that would be an awesome accomplishment. Something that I've obviously spoken publicly about and am very committed to. But that also goes with there's a lot more to be accomplished on the court."

The six-time NBA All-Star still has two seasons left in five-year, $201.16 million contract with the Warriors. He is eligible to sign a contract extension with the Warriors, and Curry confirmed that there are ongoing talks about a new deal. It remains unclear if an agreement is imminent, but Curry reiterated that he is committed to the franchise regardless of his current contract status.

"Everything's on the table right now," Curry said. "Everything I've talked about about being a Warrior and what the future holds. Obviously, I'm fully committed on what that is. And understanding I've got to do what's right for me and the team and having those conversations. I feel blessed to be in that position where I can say that  and truly believe that, so it's a matter of just letting things play out the way they should."

Curry has until December 21 to sign a contract extension with the Warriors this season. The six-time All-Star is also focused on helping the Warriors bounce back from a dismal year after finishing with the league-worst 15-50 record last season. However, it would be a tall task for the three-time NBA champion because the Warriors will be playing with his fellow superstar Klay Thompson.

Thompson missed the entire season last year after sustaining an ACL tear during the 2019 NBA Finals. He was already preparing for his return this season but suffered a huge setback. The five-time NBA All-Star tore his Achilles tendon during an offseason workout. Thompson recently underwent surgery, which will force him sit out the entire 2020-21 NBA season, but Curry is confident that they have what it takes to compete at a high level.

"I know you guys can analyze the salary-cap sheet and look at what decisions might be in the future, but for what we have right now, I love where we're at," Curry said. "I love the fact that we have enough pieces, enough talent and enough experience to surprise a lot of people this year and try to compete at the top of the West."

The Denver Nuggets rewarded Monte Morris with a fresh deal after a strong performance during their NBA bubble stint last season. Adrian Wojnarowski of ESPN reported that agent Ron Shade of Octagon confirmed that Morris signed a three-year extension worth $27 million with the Nuggets.

Morris averaged 9.1 points and 2.7 rebounds per game for the Nuggets in 19 playoff appearances last season, proving a huge spark off the bench for the Nuggets. He helped the Nuggets come back from 1-3 deficits in the first and second rounds of the playoffs against the Utah Jazz and the Denver Nuggets, respectively.

Before signing the extension, the 25-year-old point guard was set to become an unrestricted free agent after the 2020-21 NBA season, but the Nuggets made sure that they will keep him in the long run. Morris has played the first three seasons of his career with the Nuggets, who selected him 51st overall in the 2017 NBA Draft.

Ryan Blackburn of Denver Stiffs admitted that he was surprised with Denver's decision to sign Morris to an extension only because they acquired another backup point guard this offseason in Facundo Campazzo. However, he pointed out that he is very glad that the Nuggets secured Morris' future in Denver after his consistent performances for the franchise in his first three seasons in the league.

"Surprised. Given the moves the Nuggets have made during this offseason to shore up the point guard position, it didn’t feel like extending Monte Morris was ever in the cards," Blackburn said of the decision to sign Morris to a new deal. "Still, I’m glad  that they did. Morris is the only Nugget to play every single game over the past two seasons, playoffs and all. Morris is the consistent mainstay in a rotation full of volatile expectations, health, and production."

Jamal Murray is the undisputed starting point guard of the team, and now has three backups in Morris, Campazzo and PJ Dozier. Blackburn believes that the Nuggets will be having a backup point guard by committee next season, while also getting an insurance just in case one of their guards goes down with an injury. The Nuggets had to make adjustments last season after Will Barton missed their bubble stint due to an injury.