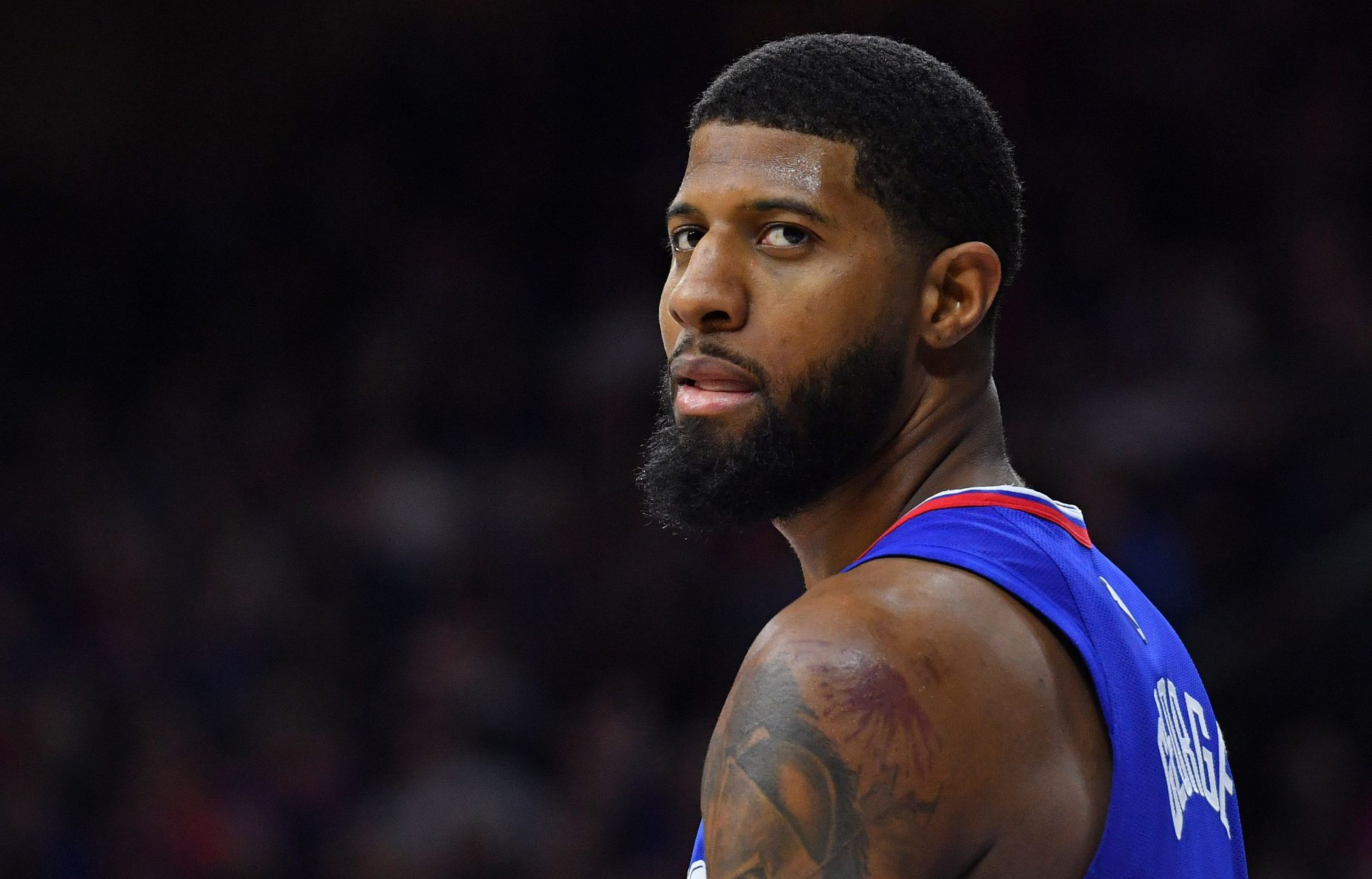 Paul George has declared that he wants to play the rest of his NBA career with the Los Angeles Clippers, and he moved a step closer to achieving that goal. The Clippers rewarded George's loyalty to the franchise with a five-year maximum contract extension despite coming off a rocky first season in Los Angeles, where he drew flak for his inconsistencies during the 2020 NBA Playoffs campaign.

According to Adrian Wojnarowski of ESPN, the new deal would pay George around $226 million in the next five years. The new deal will kick off after the 2020-21 NBA season, replacing his $37.9 million player option for the 2021-22 NBA season. His new deal still has a player option in the final year of the contract, but based on his tone, George sounded that he is no longer planning to go elsewhere for the rest of his career.

"I owe them a trophy," said George, who was sent to the Clippers in a blockbuster deal last year. "I owe them a trophy. That's what I owe this organization. This is a window that we're trying to capture. And my commitment and my job is to try to bring a title here."

George was supposed to be a part of the stacked 2021 free-agency class, which will likely be headlined by Milwaukee Bucks superstar Giannis Antetokounmpo if he decides not to sign a maximum contract extension before December 21. Clippers superstar Kawhi Leonard could also become a free agent after the upcoming season, and it remains to be seen whether or not he is also on the verge of signing a contract extension.

Leonard reportedly convinced George to ask the Thunder to trade him to the Clippers last year because he was planning to sign with the franchise. George said that Leonard was one of the first persons he informed when he agreed to the contract extension. The superstar forward is hoping that Leonard would do the same, but he pointed out that it will still be the two-time NBA Finals Most Valuable Player's decision.

"Hopefully it's a mutual bond, and we both enjoy playing with one another," George said. "Again, it's Kawhi's decision. I'm a grown man. If he decides to go elsewhere,  that's a decision that I'll be happy for him. But my hoping and my responsibility -- what I would love is to play with him for the rest of my contract or the rest of his contract. I guess I have to work on that when it comes to his time."

George averaged 21.5 points to go along with 5.7 rebounds and 3.9 assists per game last season. His point production was his lowest in five years. His performance in the playoffs was also tagged as one of the main reasons why the Clippers faltered and failed to win it all last season. But despite all the criticisms, George recently said that he is confident that he still has a lot of gas left in his tank.

"I knew last year was a rough year for me," George said via the Associated Press. "The good thing about that is I’m only 30, I still got a lot of years in the tank. It gave me a  big motivation going into this season. I’m ready to dive right into this and give everything I have."

George, Leonard, and the Clippers will look to bounce back this season. Los Angeles made big changes in the offseason, firing former head coach Doc Rivers and replacing him with former assistant coach Tyronn Lue. The Clippers also lost Montrezl Harrell in free agency, but they traded for Luke Kennard and signed veteran free agents Serge Ibaka and Nicolas Batum to further bolster their defense.

Giannis Antetokounmpo Is Not Losing Sleep Over Looming Contract Decision

The whole league is waiting for Giannis Antetokounmpo's decision about accepting or rejecting the supermax contract extension offer from the Milwaukee Bucks. The reigning back-to-back NBA Most Valuable Player has until December 21 to make his decision. However, Antetokounmpo said that he is not too focused on the contract talks, and he is letting his agent handle the situation for him, per Eric Woodyard of ESPN.

Antetokounmpo revealed that his agent Alex Saratsis and Bucks general manager Jon Horst along with the ownership group are still having discussions about the contact. The 26-year-old said that his focus is not on his looming contract decision on but on how he can help his team prepare for the upcoming season, where the Bucks will still be tagged among the favorites at least in the Eastern Conference.

The Greek superstar would become a free agent after the upcoming season if he decides not to accept the new deal from the Bucks. While he would not go into detail about the status of the discussions between his party and the Bucks, Antetokounmpo reiterated that he has nothing but love for the city of Milwaukee, where he has spent his entire NBA career after getting drafted 15th overall in 2013.

"I think about what's the best decision for me, but that's pretty much it. Then, after that, I realize that I've got so far because I've focused on how I can improve every  single day," Antetokounmpo said. "I love the city of Milwaukee. I love the organization. I love my family to death. I love winning, but at the end of the day, I wouldn't be in this situation if I wasn't working hard, I wasn't winning games, I wasn't improving every day."

Milwaukee finished with the best record in the Eastern Conference last season, but they fell short of their title aspirations after losing to the Miami Heat in five games in the second round of the playoffs. After their early exit, Antetokounmpo reportedly sat down with the ownership group to discuss the direction of the franchise before committing his future to the team.

The Bucks showed that they are willing to do everything to keep Antetokounmpo happy. Milwaukee struck a blockbuster deal with the New Orleans Pelicans, acquiring All-Star guard Jrue Holiday in a deal where they had to surrender three future first-round picks and two pick swaps. They were also on the verge of adding Bogdan Bogdanovic, but the sign-and-trade deal fell apart before the free-agency period started.

After the failed Bogdanovic trade, the Bucks shifted their focus on other targets. Milwaukee also bolstered their roster by adding veterans Torrey Craig, Bryn Forbes, DJ Augustin, and Bobby Portis. They also kept Donte DiVincenzo, who was supposed to be sent to the Kings through the failed Bogdanovic trade. Antetokounmpo said that he liked the moves that they made this offseason, particularly the trade for Holiday.

"All the guys we got, they can help the team," Antetokounmpo said. "They can defend, but having Holiday on the team is big-time. He's a great leader, he's a great human being, he can defend, he can score the ball. He's going to bring that edge on this team that we need."

Antetokounmpo added that his main goal is to win a championship as soon as possible, saying that no one wants to win a ring more than him. However, the four-time All-Star also recognized that there is no shortcut to winning it all, but he quickly pointed out that they need to keep getting better and roll the dice this year.

Pau Gasol missed the entire 2019-20 NBA season due to a foot injury, but the veteran power forward is not ready to call it quits. Gasol is eyeing a grand exit, and he is hopeful that it will end up with the team where he spent the best years of his NBA career.

Gasol admitted that he is eyeing a reunion with the Los Angeles Lakers, who recently won their 17th championship in franchise history and are favorites to win it again in the upcoming season. The 40-year-old power forward said that there is so much love and history between him and the Lakers, which was further bolstered by his brother's decision to sign with the team this offseason.

"There is meaning and history there," Gasol said of the Lakers. "I'm not going to lie. It would be very special, and now that my brother is there, even more special. But I'm not in a position now to be very demanding. I don't have 10 offers on the table."

The six-time NBA champion revealed that he has received numerous offers from teams this offseason, but he wants to play in a team where he will enjoy playing. Gasol won two championships during his seven-year stint with the Lakers, and he said that it would be "incredible" if he ends up teaming up with brother Marc in a purple and gold uniform before he ends his playing career.

"To play for the Lakers -- it's such a unique franchise," Gasol said. "It's the opportunity of a lifetime, and it's very special for us to be the first brothers to play for the Lakers. It would be incredible if it ends up happening where I can join the team at some point."