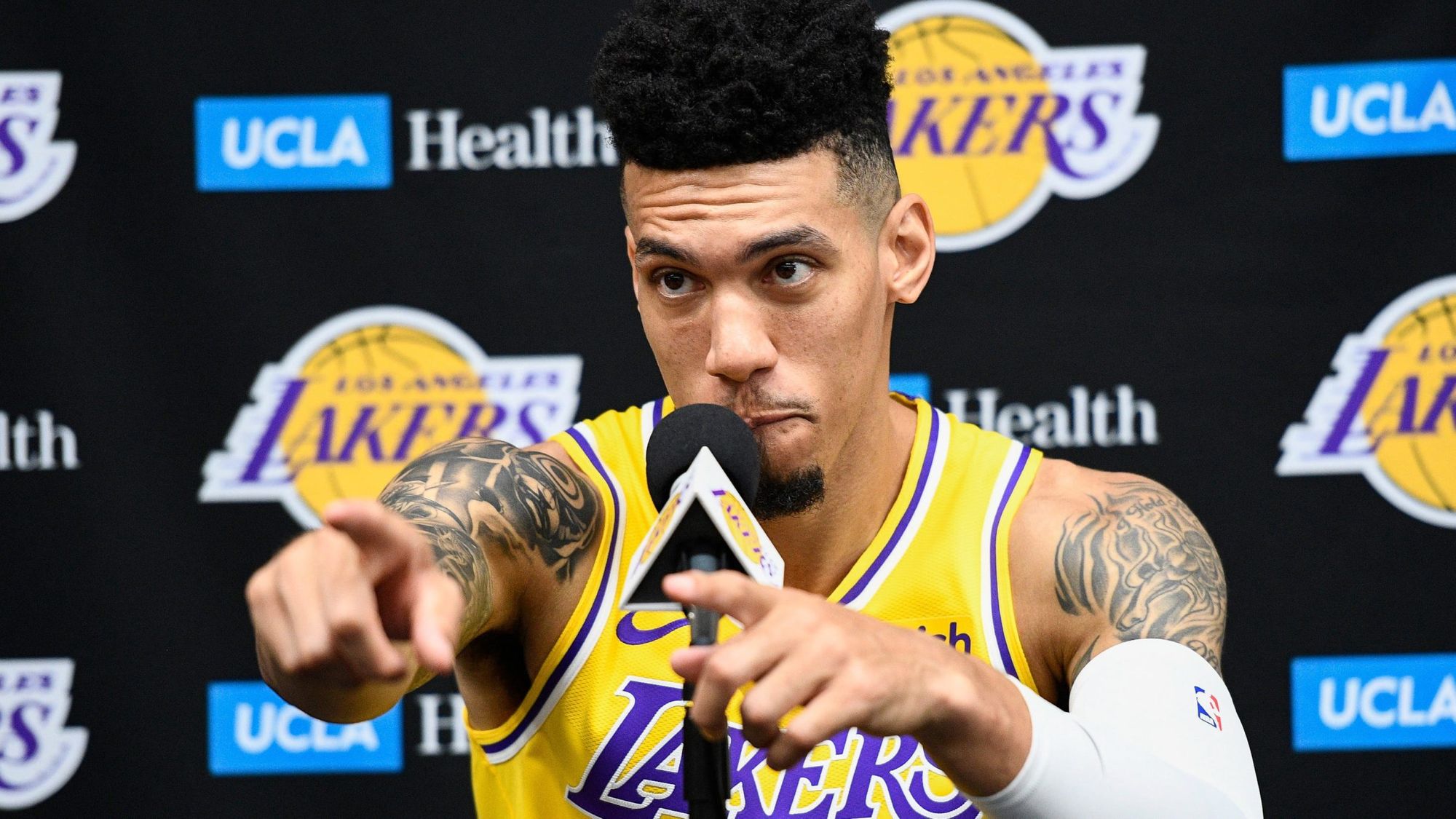 The Los Angeles Lakers might have won the 17th championship in franchise history, but that does not mean that they will not be very active in free agency and on the trade front this offseason. In fact, the Lakers are already being linked to several free agents and are being mentioned as potential landing spots for players who could be traded in the offseason.

But for Lakers veteran Danny Green, the Lakers do not need to do much in order to remain as strong title contenders next season. Green knows that several players will become free agents this offseason and he thinks that it will be tough for the team to keep all of them in Los Angeles. But in order to have a good change to repeat next season, the veteran guard says that they need to do just one thing -- keep LeBron James and Anthony Davis together.

Davis, who was acquired by the Lakers in a blockbuster deal with the New Orleans Pelicans last year, has a player option for next season. The superstar forward is not expected to exercise his option and will likely become a free agent this offseason. Davis is expected to get a lot of offers elsewhere, but there is a growing speculation that he will sign a multi-year contract with the Lakers.

"It’s going to be tough because we have so many free agents, with 10 guys that are free agents," Green said via Forbes. "Trying to bring everybody back and reconstruct the contracts, it’s going to be difficult, but when you have the nucleus of LeBron and AD — if they bring back AD — that’s pretty much what you need. You don’t need much else around them."

Green was speaking from experience, as he had his fair share of struggles last season. He pointed out that there were a lot of games when the supporting casts are not hitting their mark, but they still managed to win games because of James and Davis. The two superstars played together for the first time, but they quickly developed great chemistry, with James attributing it to the lack of jealousy between the two of them.

"In professional sports, you have guys that join forces — you can call them alpha males," James said. "That's what they call them. Two guys that have been dominant in a specific sport on their own respective teams, and they get together and they talk about how dominant they can be and they talk about this is going to be this and that. I believe jealousy creeps in a lot. And that is the absolute contrary of what we are."

Aside from Davis, the Lakers will have to wait if Kentavious Caldwell-Pope, Rajon Rondo, Avery Bradley, and JaVale McGee will exercise their player options or test the market this offseason. Veterans Dion Waiters, Markieff Morris, Jared Dudley, and Dwight Howard will all become free agents, while Kostas Antetokounmpo will become a restricted free agent when the free-agency period kicks off.

According to Nekias Duncan of Basketball News, the Lakers should prioritize keeping Caldwell-Pope once they secure a long-term commitment from Davis. While Caldwell-Pope was ridiculed for his inconsistencies during the regular season, Duncan said that there is a strong argument that the veteran guard, who averaged 10.7 points and 2.1 rebounds during the playoffs, was third-best player on the roster for the Lakers during the postseason.

Rondo has already made it known that he will not exercise his player option for next season and will try to capitalize from his strong showing during the playoffs. The 34-year-old point guard averaged 8.9 points on top of 6.6 assists and 4.3 rebounds per game during the playoffs. While Rondo has said that he will consider signing elsewhere, Duncan believes that the veteran point guard will eventually end up re-signing with the Lakers.

"Playoff Rondo may very well be a thing," Duncan said. "Teams kept daring him to shoot, and he kept making them pay to the tune of a 40 percent clip on a playoff career-high three attempts. That, combined with his playmaking and suddenly-fine- again defense, made him one of the Lakers’ more valuable role players during the title run. It shouldn’t cost too much to bring him back."

Morris also had his moments during the playoffs, as he was a valuable piece for their small-ball lineup, where Davis played the center position, which is why Duncan thinks that Los Angeles should bring him back. Howard, despite not playing a lot against the Houston Rockets in the playoffs, played a valuable role for the Lakers throughout the season. Duncan believes that Howard is worth keeping for the Lakers.

"Howard was a Comeback Player of the Year candidate if there ever was one," Duncan said of the veteran center, who averaged 7.5 points and 7.3 rebounds last season. "For the first time since, well, ever, Howard settled into a role that almost completely excised post-ups. He finally committed to being a clean-up artist: set hard screens or slip them hard, catch lobs and eat off the glass if a shot is missed."

The future of Kyle Kuzma remains hanging in the balance, though. It remains to be seen whether or not the Lakers will invest on him or use him as a trade bait for a veteran in the offseason. Talen Horton-Tucker, who did not get a lot of playing time in his rookie season, is expected to stay. In fact, Lakers assistant coach Mike Penberthy believes that the future is bright for the former Iowa State standout.

"Talen is my favorite player coming up," Penberthy said of Horton-Tucker. "He’s my favorite guy. He’s a guy I’m going to spend a lot of time with this offseason. If it wasn’t for the players that we had that were veterans, Talen would’ve played a lot more. We had discussions every day about getting Talen in the game more, but we just didn’t have time. We just couldn’t find time for him, but we were trying to."

As for the available free agents on the market, the Lakers are expected to be linked a lot to Oklahoma City Thunder forward Danilo Gallinari. Gallinari will likely be one of the most expensive options in a normal situation in the weak free-agency market this offseason. The former first-round pick had another strong showing last season, where he averaged 18.7 points and 5.2 rebounds per game.

However, the veteran forward has made it known that he will not prioritize getting a huge contract this offseason. Instead, Gallinari said that he wants to sign with a title contender to get a chance to win his first ring, knowing that he is not getting any younger. Duncan believes that the Lakers would benefit a lot if they find a way to sign the 32-year-old forward in free agency.

"If his desires have shifted, though, this could be an opportunity for the Lakers to strike and add to their offense," Duncan said of Gallinari. "Half-court creation was a non-strength at best, weakness at worst last season. Having a guy that can shoot off the bounce and get to the free-throw line almost at will could be devastating, especially when you consider he’d likely be feasting on a team’s second or third-best defender."

As for the coaching staff, Frank Vogel is expected to keep his list of assistants intact. Jason Kidd, who previously coached the Brooklyn Nets and Milwaukee Bucks, was mentioned as a candidate in several coaching vacancies is unlikely to get a new head-coaching job this offseason. Phil Handy was mentioned as a possible addition to the staff of Steve Nash in Brooklyn but has already declared his intention to remain in Los Angeles.

During a radio interview, Vogel had nothing but praises for both Kidd and Handy. Vogel said that he added both coaches to his staff primarily because of their relationship with James. Kidd played with James with USA Basketball, while Handy coached James during their time with the Cleveland Cavaliers. The now-champion coach said that the decision worked wonders for them last season.

"I think that those two hires really helped me bridge the gap with LeBron. LeBron and I had a sort of professional relationship competing against each other," Vogel said. "But I can’t say enough about Jason Kidd, and his impact on this year’s team. I mean he’s one of those guys that, there’s guys who study the game hours upon hours upon hours that don’t have the natural basketball instinct that Jason Kidd has."

Lakers general manager Rob Pelinka also said in an interview with Adrian Wojnarowski of ESPN that Kidd's impact was beyond the hardcourt. Pelinka said that Kidd was a huge factor in their decision to continue playing in the bubble after the turmoil caused by the Jacob Blake shooting. He revealed that Kidd stayed up late just to talk and listen to each player's opinion, which eventually led to their decision to continue with what they have started in the bubble.