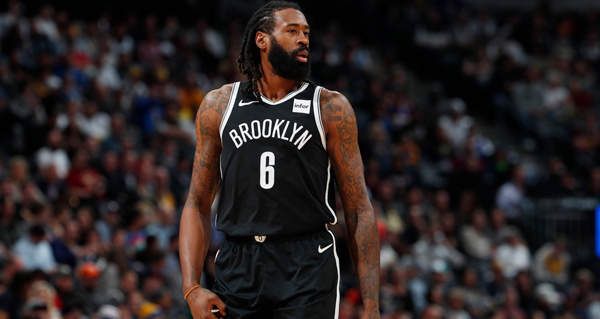 The Los Angeles Lakers, who won the Larry O’Brien championship trophy during the 2019-20 NBA season, is set to bring in another veteran to their experienced roster. Reports have it that the Lakers are set on signing veteran big man DeAndre Jordan once he reach a buyout agreement with the Detroit Pistons. Jordan, who played for the Brooklyn Nets last season, was traded to the Pistons in the offseason.

In that aforementioned deal, the Nets also shipped four future second-round draft pick plus cash considerations to the Pistons. The Pistons then sent big man Jahlil Okafor and a young talented player in Sekou Doumbouya in return. This was a move that the Nets front office had to do in order to clear salary space and also try to reduce their luxury tax bill.

The 33-year-old Jordan comes in with a lot of experience in his resume. Aside from being a former All-Star, the athletic and defensive-minded big man also led the league in rebounding in two seasons. He was also named to the All-NBA team three times, and to the All-Defensive team two times. As per Lakers beat writer Jovan Buha of The Athletic, he mentioned that the signing of Jordan could actually mean that the team will not be bringing back Marc Gasol next season.

One offseason after veering off the strategy that helped them win the 2020 championship, the Lakers are once again investing in size and athleticism at the center position, adding Jordan to a mix that already features Anthony  Davis and Dwight Howard. The signing likely spells the end of Marc Gasol’s tenure with the Lakers, as there is a clear logjam at the position and Gasol was already considering not returning.

The move could also be a sign that Davis is finally willing to start at center, as Howard and Jordan are both better suited for limited backup roles at this stage of their respective careers and would clog up the Lakers’ spacing next to Russell Westbrook.

Having said that, it is indeed a shame that Gasol was not able to win a championship with the Lakers. When he arrived at the team last offseason, there was a lot of optimism that the veteran big man could boost the Lakers’ chances of defending their title. However, it is also true that the team suffered major blows when both LeBron James and Anthony Davis sustained injuries that forced them to sit out games, ruining the Lakers’ chances of building their chemistry on the court.

With the way that the Lakers are shaping up their roster, it is without a doubt that they are on a win-now approach. With LeBron arguably entering the twilight stages of his career, his championship window is also slowly closing. Just by looking at their current line-up, the abundance of experienced and credentialed veterans on the team means that it is another championship or bust season for this Lakers squad.

As per a separate column written by Buha for The Athletic, he also mentioned that Davis could see more minutes at the center position next season. This is something that the Lakers coaching staff stayed away from in the past couple of seasons. When fielding in Davis on the floor, Lakers head coach Frank Vogel would always partner him with a bigger frontcourt players like Gasol, Howard, or Javale McGee. But with the bevy of good wing players that they acquired this summer, it looks like as if the Lakers will be rolling out more line-ups with Davis on the center position.

James, Davis and Westbrook are clearly closing locks. How the Lakers fill in the two vacant spots around them is something of philosophical debate. Davis at the five and James at the four — the modern positions that they are somewhat reluctant to embrace full time — are fundamental components of any Lakers closing lineup, as was the case in 2020 and ’21. On paper, slotting Bazemore and Ariza arguably creates the Lakers’ best lineup next season. Bazemore and Ariza, the team’s two best two-way wings, satisfy the requisite floor-spacing and perimeter defense around the Lakers’ superstar trio. They’re  the facsimiles of Kentavious Caldwell-Pope and Danny Green on this roster.

Bazemore and Ariza can handle the toughest defensive assignments, allowing James and Westbrook to roam off the primary scorers and function as help defenders. Neither wing strikes fear in an opposing defense, but they can make open 3s, which will be needed with the way teams are likely to pack the paint against Los Angeles’ three stars. There’s a strong argument that this group should start games as well, but that would require Davis to welcome starting at the five and battling the likes of Nikola Jokic, Joel Embiid and Deandre Ayton for longer stretches of games.

LeBron, Davis, Westbrook and the rest of the Lakers squad will open their regular season campaign with a very tough match-up against Stephen Curry, Draymond Green, and the Golden State Warriors. After that very difficult opening game against the Warriors, the Lakers will then go up against Chris Paul, Devin Booker, Deandre Ayton, and the defending Western Conference champions Phoenix Suns on October 22.

After that game against the Suns, the Lakers will then face Ja Morant and the Memphis Grizzlies on October 24, followed by a battle with Keldon Johnson, Dejounte Murray and the San Antonio Spurs on October 26.