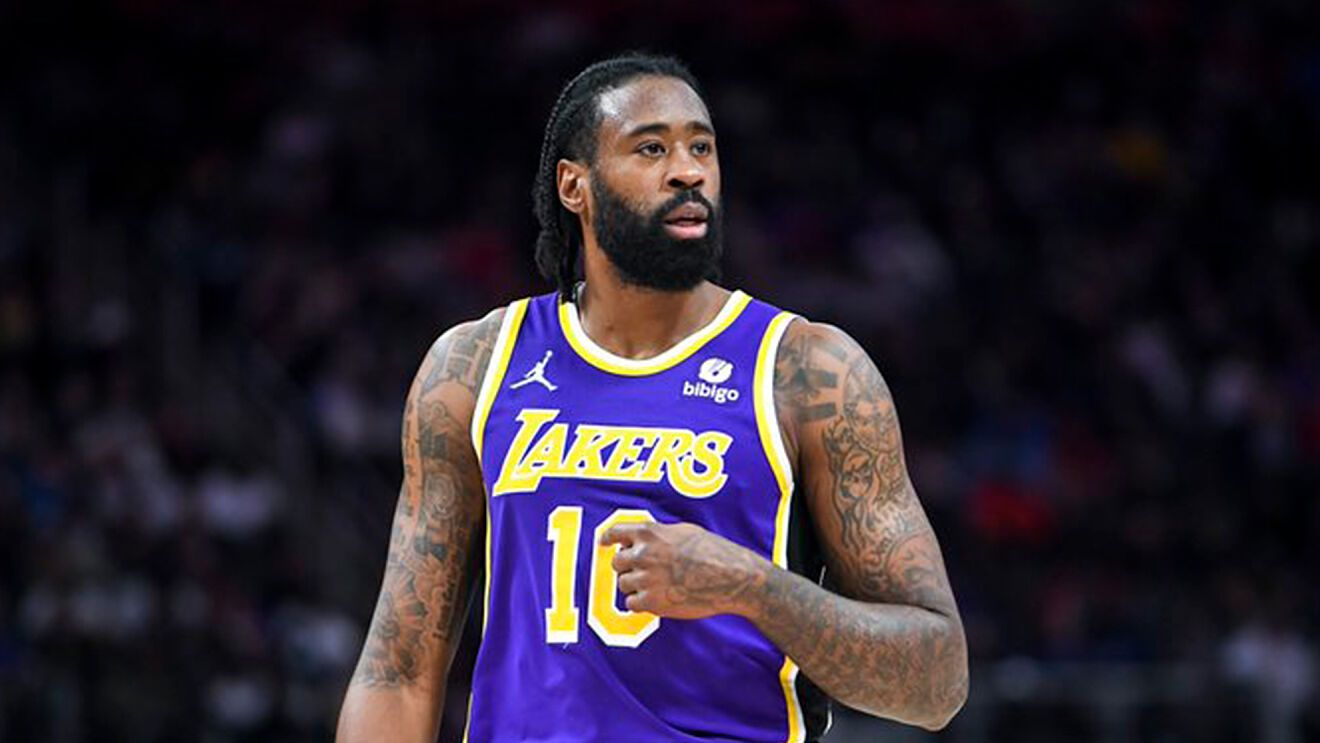 The Los Angeles Lakers have been struggling up until this point in the second half of the season, and it seems like their many troubles are not coming to an end anytime soon. As per a recent report put up by Shams Charania of The Athletic, the 2020 NBA champions have released veteran big man DeAndre Jordan to clear up a spot in the roster as they are now signing veteran point guard D.J. Augustin to shore up their backcourt depth. Jordan, who is a one-time All-Star big man and a two-time leader in rebounds, signed with the Lakers last offseason. He suited up for 32 games and started in 19 of those, while logging an average playing time of 12.8 minutes per contest. In his brief stint with the Lakers, the veteran big man put up a stat line of 4.1 points, 5.4 rebounds, 0.4 assists, 0.3 steals, and 0.8 blocks per game, while also coming up with a 67% overall clip from the field.

Jordan, who will turn 33 years of age this month of July, has previously had stops with good teams such as the Los Angeles Clippers, Dallas Mavericks, New York Knicks, and Brooklyn Nets. Jordan did not make immediate waves in the first few years of his career in the NBA, but he did flourish when superstar point guard Chris Paul joined the Clippers. His best performance came during the 2016-17 NBA season when he put up a decent stat line of 12.7 points, 13.8 rebounds, 1.2 assists, 0.6 steals, and 1.7 blocks, while producing a 71% overall clip from the field. He made it to the All-Star Game during that season, and he led the league in rebounds in the two seasons prior to that year.

Jordan, who played college ball for Texas A&M, was the 35th overall pick during the 2008 NBA Draft. He was one of the prospects in an excellent draft class that also includes Derrick Rose of the New York Knicks, Russell Westbrook of the Los Angeles Lakers, Kevin Love of the Cleveland Cavaliers, Danilo Gallinari of the Atlanta Hawks, Eric Gordon of the Houston Rockets, Brook Lopez, George Hill, and Serge Ibaka of the Milwaukee Bucks, Robin Lopez of the Orlando Magic, JaVale McGee of the Phoenix Suns, Nicolas Batum of the Los Angeles Clippers, and Goran Dragic of the Brooklyn Nets. The other notable players in that draft class include Salah Mejri, Anthony Morrow, Timofey Mozgov, Michael Beasley, O.J. Mayo, Jerryd Bayless, Jason Thompson, Brandon Rush, Anthony Randolph, Marreese Speights, Roy Hibbert, J.J. Hickson, Alexis Ajinca, Ryan Anderson, Courtney Lee, Kosta Koufos, Darrell Arthur, Nikola Pekovic, Mario Chalmers, Omer Asik, Luc Mbah a Moute, and Henry Walker. Augustin, the veteran point guard who will fill in for the spot that Jordan will leave on the Lakers roster, was also part of that draft class with the then Charlotte Bobcats selecting him with their 9th overall pick.

Along with his excellent knack for hauling down rebounds and protecting the rim, Jordan has also made strides in trying to improve his free throw shooting, which has been his great weakness as a big man. As per a column written by Kevin O’Connor of The Ringer back in 2018, Jordan made a few tweaks and changes to his free throw routine, which then paid dividends.

“Jordan has made a big shift in how he sets his feet when he steps to the line. The 6-foot-11 center previously had both feet positioned up against the line, with both feet pointed toward the rim and his legs spread apart in a wide stance. Last season, when he improved to 58 percent from the line (his previous career high), he moved his right foot back slightly and retained his wide stance; he briefly experimented with a similar alignment during the 2012-13 season, when he constantly tweaked his mechanics and shot only 38.6 percent. It didn’t work then, and it didn’t work well enough last season. He made a more drastic change this offseason. He’s kept his right foot behind his left foot, but now the distance between his feet is narrower than it’s ever been.

When I asked Carlisle why this adjustment was made, he quipped, “I really am not interested in getting into a whole thing about technique and strategy.” It’s not the first time Dallas has made such an adjustment. Shortly after acquiring Rajon Rondo in 2014, the Mavericks made an identical change to Rondo’s stance. Rondo, a 60.4 percent career free throw shooter, didn’t stick with the tweaked alignment at the line, but it did help his jumper. Coaches have told me that players with long arms, like Jordan and Rondo, can feel shoulder tension if they point both feet at the rim; it’s harder to tuck the elbow in to keep it aligned with the rim. By shifting a foot back, a shooter can more naturally align their hand and shoulder with their hip and feet to create a more comfortable, looser release. Jordan’s shot has never looked more relaxed than it has this season. When Jordan entered the NBA in 2008, he used to bring the ball toward the side of his head, then shoot. It looked like—and operated as inaccurately as—a medieval catapult.”

In the place of Jordan’s spot in the Lakers roster, the team will be bringing in Augustin, who is a point guard known for his three-point shooting. Augustin suited up for 34 games for the Houston Rockets this season and started in two of those, while logging an average playing time of 15.0 minutes per contest. The veteran point guard put up a stat line of 5.4 points, 1.2 rebounds, 2.2 assists, and 0.3 steals per contest this season, while also producing a set of shooting percentages that include a 40% overall clip from the field, a 40% clip from beyond the arc, and an 86% clip from the free throw line. Augustin will turn 34 years of age this month of November, but there is no doubt that he could still contribute to a contender, especially on the offensive end of the floor.

Augustin, who played college ball for the Texas Longhorns, was a highly-touted prospect when he applied for the NBA Draft in 2008. Before he entered the professional league, Augustin accomplished tons of individual accolades, a long list that includes a Fourth-team Parade All-American selection in 2006, while also being selected as a McDonald’s All-American during that same year. He then made it to the Big 12 All-Rookie Team in 2007 and the Second-team All-Big 12 in that same year. The year 2008 was his big season as he made it to the First-team All-Big 12 and the Consensus first-team All-American, while also winning the Bob Cousy Award during that same impressive year of his.

While Augustin never lived up to the star billing that was expected of him when he entered the league, it is without a doubt that he was a serviceable role player throughout his productive career. Augustin has been quite a journeyman in his time in the NBA, as he previously had stops with the Charlotte Bobcats, Indiana Pacers, Toronto Raptors, Chicago Bulls, Detroit Pistons, Oklahoma City Thunder, Denver Nuggets, Orlando Magic, Milwaukee Bucks, Houston Rockets, and now with the Los Angeles Lakers. Augustin is not someone who can move the needle for a contender, but his experience and three-point shooting could help space the floor for the likes of LeBron James, Anthony Davis, and Russell Westbrook.

But of course, the Lakers’ struggles will not just go away with the arrival of a veteran like Augustin. As per a column written by Rob Mahoney for The Ringer, he pointed out that this version of the Lakers are yet to figure out how to be a good “LeBron James team.”

With almost half the season already behind them, the Lakers still haven’t figured out how to be a LeBron James team. It’s the damnedest thing; no superstar in the league comes with a clearer, more defined winning blueprint than LeBron, and yet nearly two decades of precedent hasn’t stopped the Lakers from constructing and running the kind of team that consistently works against its own best interests. That was on full display in the Lakers’ Christmas Day showcase—a would-have-been statement game sapped of its stakes by the fact that the visiting Nets had seven players (including Kevin Durant and Kyrie Irving) out due to COVID protocols, and another key role player (Joe Harris) out with injury. Even a Lakers team working without Anthony Davis was at a decided situational advantage, and yet managed to lose anyway to drop their fifth straight game.

A generous read would highlight the fact that the Lakers came back from 23 down in the fourth quarter to tie it in the final minute. A more honest read would underline the fact that they were down 23 in the fourth quarter to begin with, getting waxed not just by James Harden, but Patty Mills and, on occasion, the likes of Bruce Brown and DeAndre’ Bembry. As has often been the case of late, the greatest indictment came from LeBron’s spectacular play. James dropped 39 points against the Nets on just 25 shots. He scored 36 the game prior, 34 in the preceding game, and 31 in the game before that. All were losses for the Lakers. “I’m kicking myself in the head because he’s giving an incredible effort,” acting head coach David Fizdale told reporters after the game. And yet no team James has played for has ever been outscored by this many points (76) over a five-game stretch, according to ESPN Stats and Info.

As for the Lakers team as a whole, they are currently sporting a disappointing record of only 27 wins against 33 defeats, which is only good for the 9th spot in the Western Conference standings. They have lost five of their last six games, including painful losses at the hands of the Milwaukee Bucks, Portland Trail Blazers, Golden State Warriors, Los Angeles Clippers, and the New Orleans Pelicans. In their next set of assignments, they are tasked to go up against the Clippers, Warriors, Dallas Mavericks, San Antonio Spurs, Houston Rockets, Washington Wizards, Phoenix Suns, and the Toronto Raptors.