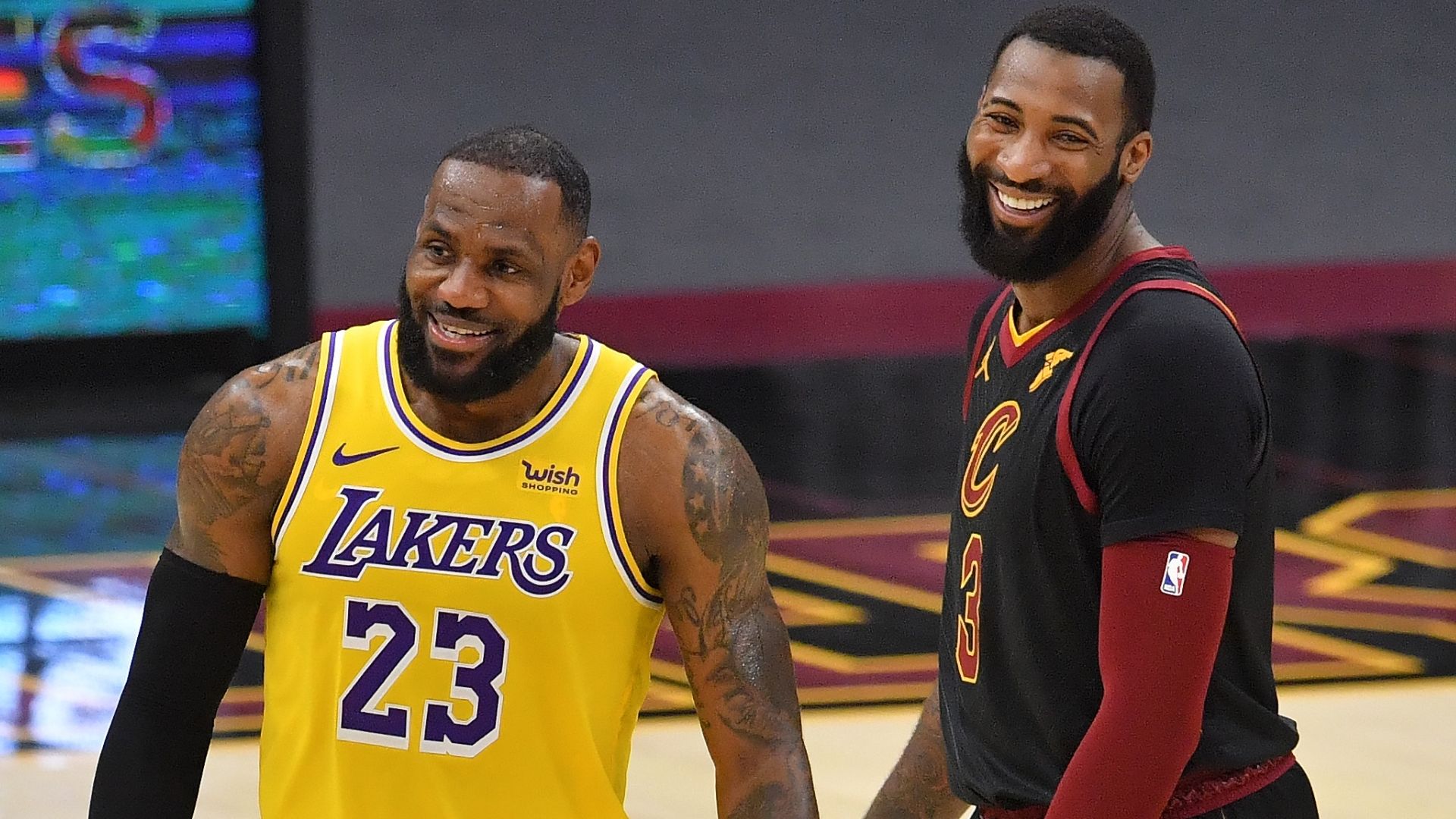 The Los Angeles Lakers acquired another quality reinforcement in the form of Andre Drummond in their bid to defend their Larry O’Brien championship trophy. Drummond played only 25 games for the Cleveland Cavaliers before both sides mutually agreed that it is better to part ways this season. Without a trade partner willing to negotiate a deal, Drummond and the Cavaliers then reached a buyout agreement, and that resulted in Drummond entering unrestricted free agency.

Still, it was not like Drummond was a bad player this season. In the 28.9 minutes he logged in for the Cavaliers each game, Drummond put up outstanding numbers of 17.5 points, 13.5 rebounds, 2.6 assists, 1.6 steals and 1.2 blocks. Those are all-around numbers that should be an excellent indicator of his potential to also log in quality minutes for the Lakers.

Drummond is a decent offensive players who has the ability to catch almost every lob pass, and he also has a soft touch on his semi-hooks off the post. He can deliver occasional kick-out passes, and he is not a big man who forces his shots inside the paint. Drummond also sets good hard screens, and he knows where to position himself in his team’s offensive schemes.

So to sum it all up, Drummond does not need the ball on his hands to be effective on the offensive end of the floor. That will bode well as he plays with the Lakers’ bevy of playmakers and scorers like the four-time Most Valuable Player LeBron James, superstar big man Anthony Davis, scoring combo guard Dennis Schroder, reigning Sixth Man of the Year Montrezl Harrell and a young scoring combo forward in Kyle Kuzma.

But on top of that, Drummond’s strength still lies on the defensive end of the floor. He has always been one of the better rim protectors in the league, and he also reads the opposing teams’ offense well and comes up with the occasional steals and deflections. But his greatest strength is his stellar rebounding prowess. Drummond has led the league in rebounds four times in his career, and he has not declined in that facet of his overall game.

As per Dave McMenamin of ESPN, Drummond points out to his defensive capabilities as the greatest asset he could bring to this veteran Lakers squad. It was also apparent that he cannot hide his excitement on playing again this season, especially when James and Davis come back from their respective injuries.

"I think our defense is going to be really crazy when those guys come back. And I'm looking forward to it. It's been almost a month [and] 10- plus days since I last played. You can imagine the hunger and excitement I have to play and step on the court. I had an incredible month of work where I'm ready to play today.

I'm not here to steal nobody's shine. I'm here to help this team win as many games as possible. My defensive game is going to help this team out a lot with my quick feet, quick hands. Going to be able to recover and play 1 through 5. I think for me coming here, AD could slide to the 4 and play his true position and be very good at it without taking all the bumps and bruises I do at the 5.”

However, it was a shame that Drummond’s debut with the Lakers did not go well as many expected. The Lakers, who were without James and Davis, lost a 112-97 contest to reigning MVP Giannis Antetokounmpo and the Milwaukee Bucks. Giannis and Jrue Holiday led the charge for the Bucks as they pounced on a helpless and depleted Lakers squad.

Drummond, who started the game for the defending champs, only had four points, two assists, one rebound and one block. The veteran big man only played 14 minutes in his debut game as he had to exit the night early due to an apparent toe injury. As per a separate column written by McMenamin for ESPN, it was Bucks veteran center Brook Lopez who unintentionally stepped on Drummond’s foot in the opening period, and that was what caused the injury to happen.

Drummond said that he tried to play through the injury in the first half, but the pain eventually became unbearable that he could not even walk or run. He eventually had to talk to Lakers head coach Frank Vogel to sub him out for him and the team’s medical staff to mend to his injured toe.

"I didn't really think anything of it. I came back in the second quarter and it was hurting a little bit more. And then after halftime, I finally took my sock off to look and my whole toenail was gone. So, it was just all bad from there. I couldn't walk or run. So I just told Coach [Frank Vogel] to take me out. What do you do for a toe? I don't know. I'm not really sure what to do. I'm just going to talk to the training staff and find   out what's the best thing to do to get back as quick as possible.

In that first quarter, a lot of energy from our guys and myself. We were  having a lot of fun out there. Just unfortunate for that to happen in the first game."

With Drummond now on the team, the Lakers now have an excellent rim protector who has the elite vertical athleticism to block shots. That was something that they are solely missing this season, especially with the departure of frontcourt players JaVale McGee and Dwight Howard last offseason.

With Howard and McGee manning the center position for the Lakers last season, the team could always count on these two outstanding shot-blockers to protect the rim for them. But both centers moved on to different teams last offseason, with Howard signing with the Philadelphia 76ers and McGee inking a contract with the Cleveland Cavaliers. McGee was then recently traded to the Denver Nuggets, one of the more serious contenders in the stacked Western Conference.

That is exactly what the Lakers will be needing from Drummond, especially now that the season is entering its stretch run to the more important games of the playoffs. The Lakers are currently sporting a record of 30 wins against 18 defeats, which is good for the fourth spot in the West standings. They are trailing Donovan Mitchell and the league-leading Utah Jazz in the standings, followed by Chris Paul and the Phoenix Suns, then Kawhi Leonard and the Los Angeles Clippers.

As for the role that the Lakers would want Drummond to fulfill, head coach Frank Vogel has the answer. As per Jovan Buha of The Athletic, Vogel said that Drummond’s physicality is something that the team needs right now. Vogel also pointed out to the former All-Star big man’s knack for bringing in the valuable intangibles to the table. Vogel also addressed how he would handle the playing time distribution now that Drummond adds to the Lakers’ frontcourt depth that also includes Davis, Harrell and veteran big man Marc Gasol.

“We’re all thrilled to add Andre Drummond, a player of his caliber to our team. He’s one of the best centers in the league, someone that every defensive coordinator is going to have to account for and to figure out how to handle him when they’re trying to slow down AD and Bron and our guards. I think he’s going to give us a big lift in the immediate future and then obviously when we get going. He can dominate the game on both sides of the ball. His physicality is something you have to account for.

He’s one of the most dominant rollers, lob catchers, post players, offensive rebounders in the game. Screeners. The list is long for how he’s gonna contribute to our group and, you know, I do think he’s gonna have an impact on our group right away offensively. All I can say is we’re gonna need them all. There’s no doubt in my mind we need all three of them for this playoff push that we’re about to endure. We have a really condensed second half of the season, and every playoff series is  different. We saw the flexibility that we have a coaching staff from playoff series to playoff series that different guys’ skill sets match different opponents and I really believe we’re gonna need all three of those guys and I expect to use all three of them.”

Of course, the Lakers were not the only team who were interested in acquiring Drummond’s services. Even before the season began, there were reports saying that the Boston Celtics were already interested in bringing in Drummond to shore up their undersized frontcourt.

On top of that, teams like the Brooklyn Nets, Miami Heat and the Dallas Mavericks were rumored to be in pursuit of Drummond as soon as he reached a buyout agreement with his former team, the Cavaliers.

As for Drummond and the Lakers, it is without a doubt that there is still a lot of work ahead of them. They have lost five of their last seven games, and the prolonged absences of James and Davis could even hamper the team’s chemistry this season. After their recent double digit loss at the hands of Antetokounmpo and the Bucks, the Lakers will then embark on a long seven-game road trip that will feature tough contests against the Sacramento Kings, the Los Angeles Clippers, the Toronto Raptors, the Miami Heat, the Brooklyn Nets, the New York Knicks and the Charlotte Hornets.