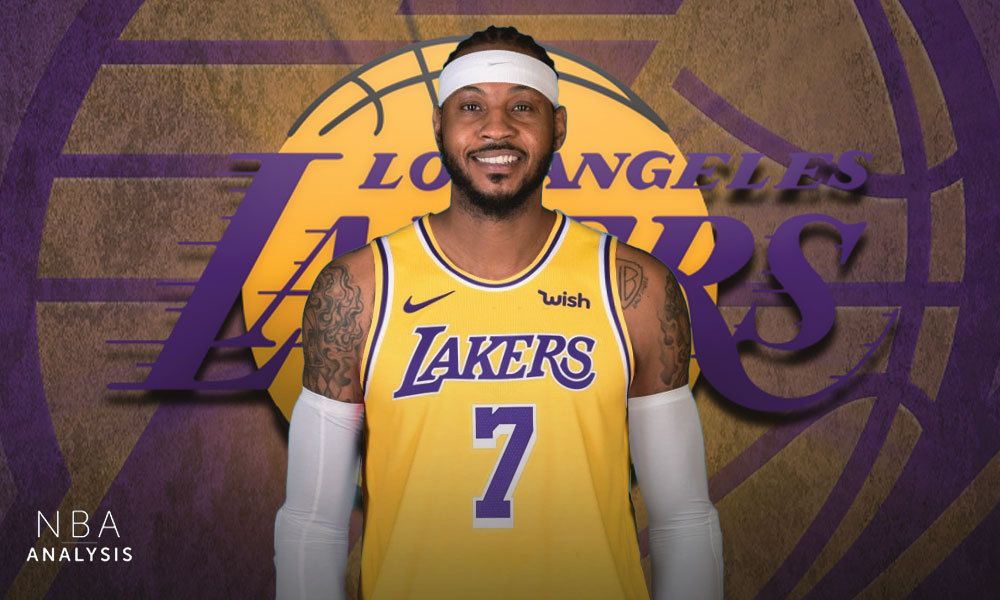 After years of being on opposing teams, Carmelo Anthony is finally teaming up with his long-time buddy LeBron James on an NBA squad. As per ESPN senior insider Adrian Wojnarowski, it is being reported that the Los Angeles Lakers front office have agreed to bring in Carmelo on a one-year deal, as per an agreement between team general manager Rob Pelinka and Aaron Mintz of CAA Sports, who is Anthony’s agent.

While it is true that Carmelo has been of a big help for the Portland Trail Blazers in the past couple of seasons, many fans have been clamoring for a partnership between him and LeBron. Before Anthony joined the Blazers in the middle of the 2019-20 season, rumors have it that the veteran scoring forward also had the Lakers as one of his options. However, a roster spot was not open at that time and Anthony ended up joining Damian Lillard, CJ McCollum, Jusuf Nurkic and the Blazers during that season.

Free-agent forward Carmelo Anthony agreed to terms with the Los Angeles Lakers on Tuesday, Anthony's manager, Bay Frazier, told ESPN's Adrian Wojnarowski. The deal -- one of several made by the Lakers on Tuesday -- is for one season, according to Frazier. Anthony's agent, Aaron Mintz of CAA Sports, completed the agreement with Lakers general manager Rob Pelinka on Tuesday.

Anthony, who moved up to No. 10 on the NBA's career scoring list last  season, rehabbed his career in two seasons in Portland after being out of the league for a year following an ill-fated stint with the Houston Rockets. The 18-year veteran flourished in a bench role with the Blazers last season, averaging 13.4 points in 24.5 minutes per game while shooting a career-best 40.9% from 3. Anthony, 37, entered into the league with LeBron James in the famed 2003 draft class, and the two have maintained a close friendship.

Of course, this is more than just a feel-good story for Anthony. Even at his age, there is no doubt that he can still put up buckets on a regular basis. Anthony, who turned 37 years of age last May, is coming off a season in which he put up a decent stat line of 13.4 points, 3.1 rebounds, 1.5 assists, 0.7 steals, and 0.6 blocks per game for the Blazers. Most importantly, he also shot an excellent 40% clip from the three-point line, a great indicator of how well he can shoot and space the floor for LeBron, Anthony Davis, and Russell Westbrook in the Lakers camp.

It remains to be seen just how much playing time he will log in for Lakers head coach Frank Vogel, but it is certain that he will have an integral role in the team’s rotation. On top of his shooting and scoring on offense, Anthony has also showed that he can be reliable on the defensive end of the floor. Before his stint with the Blazers, people raised concerns on whether he can accept a bench role or do enough to not be a liability on defense. But with how well he played for the Blazers, Anthony surely erased all those doubts and shut down his critics.

But now that he is entering the final years of his illustrious basketball career, people are already questioning just how much the 37-year-old Anthony can contribute on both ends of the floor. Add to that the fact that the Lakers squad is full of veteran players who are already at advanced ages. James is already 36 years of age, Trevor Ariza is 36, Marc Gasol is 36, Dwight Howard is 35, Wayne Ellington is 33, Kent Bazemore is 32, and Westbrook is 32 years of age.

But as per a column written by Dave McMenamin for ESPN, Anthony reiterated that he is not losing sleep over all these age concerns. The former All-Star forward said that he and the whole Lakers squad will make their own narrative, and shut out all the noise from the outside. He pointed out that basketball is also about experience, and that is their main advantage moving forward.

"We don't care. We don't care. We make our own narrative. I like when people talk about the age. It gives a better story. I think it gives a better story. I think people forget, at the end of the day, it's about basketball. You got to know how to play basketball. You got to have that experience. I think that's what we bring at this point and time. Our talent, our skill, but also our experience.

I'm coming in with a championship on my mind. I think we all know that this is the one thing that I'm missing, right? This is the one thing that it keeps me up at night, it motivates me, because I don't have it. I want that experience. It seems just throughout my whole career, I've always been connected to the Lakers some way, somehow. Whether it was through my brother Kobe, regardless of what it is, I've always been connected to it some way, somehow. It wasn't really no pitch this time. I think it was really just more of an understanding. Like, 'OK, the time is now. The time is now for both parties to merge, for both parties to agree to come together, and let's put this thing together.'"

Along with Anthony, the Lakers also acquired the services of defensive-minded combo forward Trevor Ariza. Ariza, who last played for the Miami Heat, put up a stat line of 9.4 points, 4.8 rebounds, 1.8 assists, 1.0 steals, and 0.6 blocks per contest. He also logged in 28.0 minutes per contest for the Heat, while shooting a decent 35% clip from beyond the arc.

While it is true that Ariza has been quite the journeyman in the past several years, he is mostly remembered for playing an integral role in the Los Angeles Lakers’ successful championship run in 2009. After losing to the Boston Celtics in the 2008 NBA Finals, the Lakers got back to the championship stage in 2009, and they gave a bigger role to Ariza this time around.

The Lakers also got back the services of Dwight Howard, who played for the Philadelphia 76ers last season. Even while coming off the bench and logging in only 17.3 minutes per contest, Howard was still able to come up with a stat line of 7.0 points, 8.4 rebounds, and 0.9 assists. He may not be the star that he once was, but Howard can certainly produce the numbers and be of valuable impact even in limited playing time.

Howard was also part of the Lakers squad that won the title in 2020, and it is without a doubt that he would still be a part of the rotation moving forward. Along with Anthony, Howard, and Ariza, the Lakers also acquired the services of Kendrick Nunn, Wayne Ellington, Kent Bazemore and Malik Monk. But of course, their biggest acquisition this offseason was Russell Westbrook, who pointed out that it is indeed a dream come true for him to play for his hometown squad.

"Being from L.A., you always wish that you can play for your home team and be able to do that. But that's definitely something that always kind of circled around in my mind. And maybe one day. But I would always come back and be like, 'Ahh, that probably won't happen.' It's surreal. I think it still hasn't hit me yet, being from L.A., growing up not too far from here and being able to watch the parades -- try to go to them, try to miss school to try to go to them. Being a Laker fan and being from L.A., but now everything coming full circle for me.

This stuff happened so quickly, all of this happened so fast, the last two weeks or so we've had brief conversations and talked about obviously what   we need to do. It hasn't left my head. Things that we talked about -- me and him -- just the potential of me being able to be a Laker, understanding what that entails. It's just crazy to think about, and that will be with me every time I put that Laker jersey on."

But of course, these additions would not matter if the Lakers’ superstars fail to remain healthy all season long. Last year, the team had to endure tough injuries to LeBron and AD, not to mention other key role players who also missed tons of games due to respective health setbacks.

As a result, the Lakers failed to build up their chemistry and an AD injury in the first round of the playoffs concretized their ill fate last season.