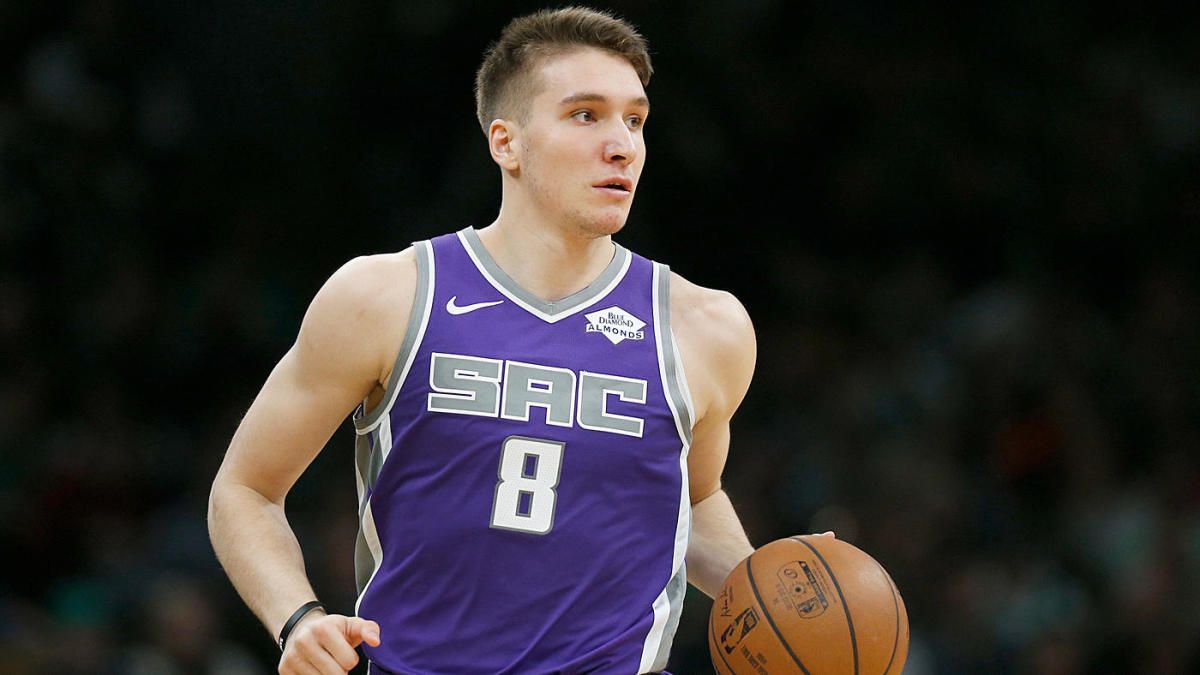 The Sacramento Kings are expected to be very active in the offseason, as they need to make decisions on several free agents. The Kings had another disappointing campaign this season, which led to the departure of general manager Vlade Divac and assistant GM Peja Stojakovic.

Bogdan Bogdanovic, who showed a lot of promise for Sacramento this season, will become a restricted free agent after the season. The Kings have the right to match offer sheets for Bogdanovic to keep him in Sacramento. According to James Ham of NBC Sports, among the Kings players who will hit free agency, Bogdanovic is the only one likely to get a strong look from Sacramento.

"The Kings walk into the offseason with a stack of free agents. Bogdanovic is the lone restricted free agent and the Kings are likely to match any offer he receives in the offseason," Ham said. "The remaining group of Harry Giles, Alex Len, Kent Bazemore, Yogi Ferrell, and Corey Brewer are all unrestricted moving forward and can sign with any of the league's 30 teams. Expect Bogdanovic back, but the rest of   the group is completely up in the air."

In his third season with the Kings, the 27-year-old forward averaged a career-best 15.1 points on 44.0 percent shooting from the field to go along with 3.4 rebounds and 3.4 assists. He also ended the season on a high note, as he tallied 27 points on top of nine assists, six rebounds, and two steals in their 136-122 win over the Los Angeles Lakers in their final seeding game in Orlando.

But unlike Bogdanovic, the Kings are likely to let Harry Giles walk away in the offseason. The 22-year-old center, who was the 20th overall pick in the 2017 NBA Draft, did not make a significant impact in his second season in Sacramento, as he averaged just 6.9 points and 4.1 rebounds in 14.5 minutes per game.

"Giles is a tough one," Ham said of the status of the former Duke University standout."His passing ability and raw potential are intriguing. Does he fit with the roster  moving forward? Did the Kings burn a bridge when they didn’t pick up his fourth-year option? It’s very likely that Giles will be playing elsewhere next season."

Ham added that the Kings should strongly consider keeping Bazemore. Sacramento acquired Bazemore in a trade with the Portland Trail Blazers before the deadline. In 25 games for the Kings, Bazemore posted 10.3 points to go along with 4.9 rebounds and 1.2 steals per game. Len's status would depend on his asking price, but Ham pointed out that signing him to a budget deal could work out for Sacramento.

If the Philadelphia 76ers suffer another early playoff exit this season, the team is expected to strongly consider overhauling their roster. This early, there are talks about the possibility of breaking their superstar duo of Ben Simmons and Joel Embiid. But if the 76ers decide to keep both superstars, Philadelphia is likely to give them a new supporting casts next season.

According to Tom Haberstroh of NBC Sports, the 76ers need to surround Embiid and Simmons with more shooters. Their shooting was not too impressive this season after losing JJ Redick in free agency. If the 76ers opt to add another sniper to their roster, Haberstroh said that the 76ers should go after Brooklyn Nets forward Joe Harris.

Harris will become an unrestricted free agent in the offseason and is expected to attract a lot of suitors. The 28-year-old forward averaged 14.5 points on 48.6 percent shooting from the field, including a 42.4 percent clip from beyond the arc. Acquiring him would be easier said than done for teams who will express interest in sharp-shooting forward.

The Nets will be on the driver seat because they own his Bird rights, which means that they can offer a higher salary than any other team on the market. Staying in Brooklyn would also give Harris a chance to contend for a title next season with a healthy Kyrie Irving and Kevin Durant, who missed the season with an Achilles injury.

As for the 76ers, they might not have enough room to offer an enticing deal to Harris. But according to Haberstroh, the 76ers could acquire him in a sign-and-trade deal with the Nets Tobias Harris could be a big factor for the 76ers in the event the Nets decide to trade Harris.

"A sign-and-trade could be doable," Haberstroh said. "The question is whether the Nets would want in return, supposing he’s even on the table. The Nets have a hole at power forward and they could be interested in bringing home Long Island native Tobias Harris as a high-quality safety net for Kevin Durant, allowing the two-time MVP to ease back into the flow of things after his Achilles injury."

And if they fail to land Harris, Haberstroh added that the 76ers should make another run at Nemanja Bjelica. The Kings might consider moving the 32-year-old Bjelica, who averaged 11.5 points and 6.4 rebounds per game this season, depending on how the situation of Bogdan Bogdanovic will turn out in the offseason.

"Another intriguing option is Sacramento’s Nemanja Bjelica," Haberstroh said. "If   Bjelica hadn’t made a last-minute reversal in 2018 free agency, he'd be on the Sixers right now. Bjelica is due $7.2 million next season and the Kings have an interesting offseason ahead with Bogdan Bogdanovic being a restricted free agent. Trading for Philly’s Richardson could be a fallback option if Bogie’s price tag gets too high for    Sacramento’s liking."

Meanwhile, the Atlanta Hawks are also expected to be active in free agency in the hopes of finally making the playoffs for the first in the Trae Young era. With a potential superstar in Young leading the team, the Hawks are expected to become an attractive destination for free agents.

The Hawks have enough room to sign Ingram to an expensive deal in the offseason. Preston Ellis of Bleacher Report believes that the Hawks should strongly consider signing the All-Star forward. Ellis believes that Ingram would be a great fit with Young, John Collins, and Clint Capela.

"If they added Ingram to John Collins, who's extension-eligible this summer, and Clint Capela, the move would immediately improve the NBA's No. 26 offense and create one of the league's most exciting young frontcourts," Ellis said. "Ingram's 24.1 points per game and secondary playmaking could marry perfectly to Trae Young's game. His ability to stretch the floor (38.5 percent from three) may make things even     easier for Collins and Capela."

However, Ellis pointed out that the Pelicans are likely to match any offer to the 22-year-old forward. The former Duke University standout emerged as the biggest prize for the Pelicans from the Anthony Davis trade with the Los Angeles Lakers last year. Ellis said that letting Ingram walk away would "reflect the instability the franchise has exhibited over nearly two decades" in the league.

Meanwhile, the Los Angeles Lakers also have work to do in the offseason with Anthony Davis. The superstar power forward could become a free agent if he decides to decline his $28.75 million player option in his contract. The Lakers tried to negotiate a contract extension earlier in the season, but Davis opted to turn it down to keep his options open in free agency.

If things fall apart for them in the 2020 NBA Playoffs, there is a strong chance that the 27-year-old power forward would leave Los Angeles. Moving to New York would be an option for Davis. According to Ellis, transferring to Brooklyn is a more enticing option for the former Kentucky star.

"While the Knicks have the cap space to sign him outright, Davis has been clear about   his desire to win," Ellis said. "That should propel him to the other New York team, on which Kevin Durant and Kyrie Irving currently reside. The Brooklyn Nets don't have the space to make a free-agency deal, but they have plenty to unload in a trade. A package built around Caris LeVert, Spencer Dinwiddie, and Jarrett Allen should be enough."

The Chicago Bulls are always being linked to Davis, especially after Chicago native hinted that he is opening to playing for his hometown team. However, the Bulls do not have a lot of attractive assets to arrange a sign-and-trade deal for Davis. And even if they find a way to create cap space, it remains to be seen whether or not Davis would even consider having a meeting with the Bulls.

However, Ellis pointed out that if the Lakers win it all or at least perform excellently in the playoffs, Davis will likely commit to a long-term deal with the Lakers. In the first place, Davis made it known before that the Lakers is his preferred destination when he asked the Pelicans to trade him. As long as LeBron James stays healthy, Davis and the Lakers are expected to remain a perennial title contender in the seasons to come.