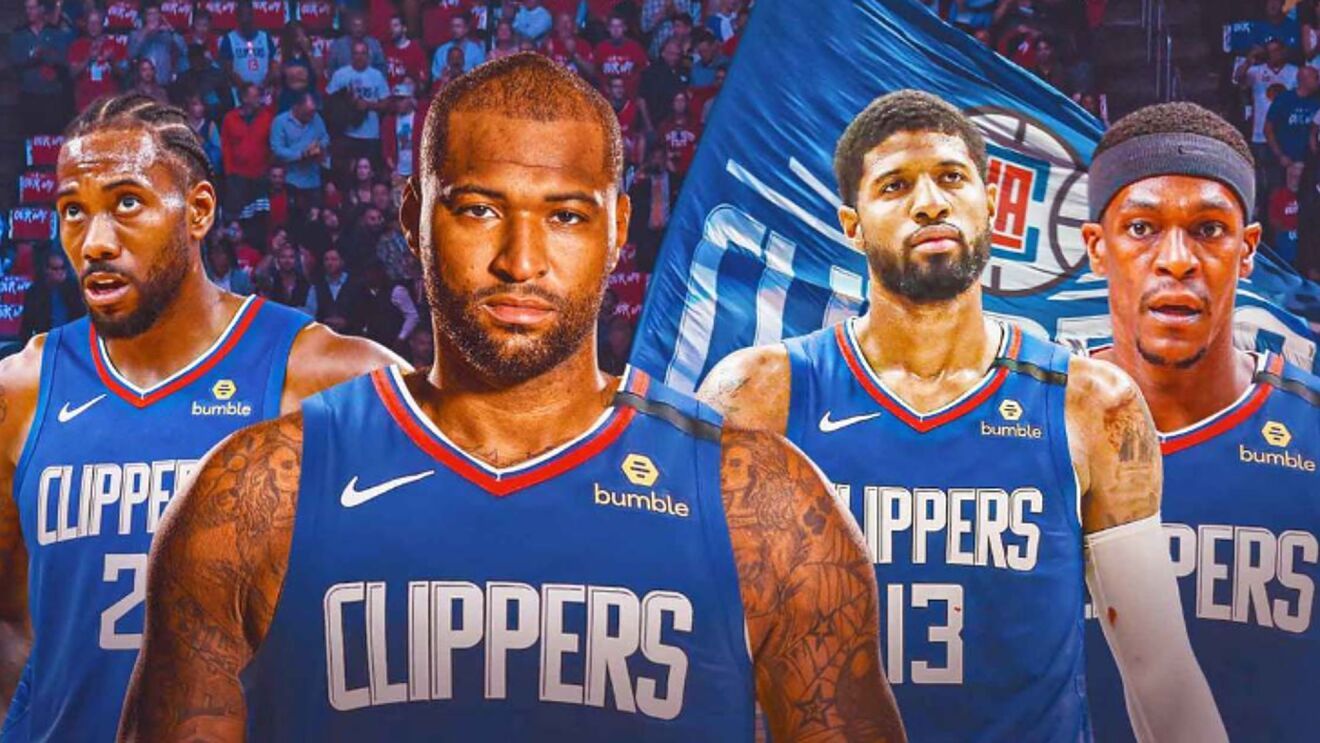 It is now becoming more apparent that the Los Angeles Clippers are bent on adding more veterans to their roster spearheaded by two superstars in Kawhi Leonard and Paul George. Shams Charania of The Athletic recently reported that the Clippers are bringing in former All-Star big man DeMarcus Cousins, who spent the first half of the season with the Houston Rockets.

Cousins joined the Rockets last offseason as the Rockets front office tried to add more star power to a roster led by a former Most Valuable Player in James Harden. The Rockets would also send star Russell Westbrook to the Washington Wizards in exchange for another star point guard in John Wall. Interestingly, Wall and Cousins were teammates during their collegiate career in Kentucky, and they have been close friends ever since.

However, things spiralled out of control when Harden issued a demand to be traded to another team this season. The Rockets front office had no choice but to grant that request, and they soon shipped the disgruntled Harden to the Brooklyn Nets via a multi-team trade deal.

But even before then, the writing was already on the wall: the Rockets did not have what it takes to make some serious noise in the playoffs. Cousins and the Rockets eventually reached a contract buyout agreement last February, paving the way for the four-time All-Star center to enter unrestricted free agency and have the freedom to join any team of his liking.

Cousins now joins a Clippers team with lofty aspirations this season. Law Murray, a Clippers’ beat writer, joined The Athletic in detailing out why the Clippers are giving the oft-injured Cousins a spot in their roster and a possible niche in head coach Ty Lue’s rotation. Murray hints out that Cousins will not see a significant amount of playing time for the Clippers, but he could serve as an excellent insurance policy for veteran big man Serge Ibaka.

“The Clippers want to bring Cousins in because as happy as they are with the centers on the roster, as well as Tyronn Lue's comfort playing lineups without a traditional center, they need another viable big body option. Serge Ibaka has been out since injuring his back in New Orleans on March 14. Ivica Zubac has been great in Ibaka's absence, but Patrick Patterson has been the de facto backup center. Daniel Oturu doesn't play outside of garbage time even when the team is limited to nine active players. Cousins is an 11-year veteran with collegiate (Patterson) and professional (Rajon Rondo) connections to players on the team.

Cousins would be an insurance policy for Ibaka, similar to how Rondo is an insurance policy for Beverley. Lue could theoretically use Cousins as a stretch five similar to Ibaka, as Cousins is an adequate 3-point shooter with legitimate range. Defensively, Cousins would add another solid rebounder to what has been the best defensive rebounding team in the West this season.”

Cousins, who also notched two selections to the All-NBA team, averaged 9.6 points, 7.6 rebounds, 2.4 assists, 0.8 steals and 0.7 blocks per game for the Rockets this season. Those numbers are the lowest outputs of his productive career, and those were caused by a dip in his playing time of only 20.2 minutes per contest this year.

It is such a shame that Cousins’ path to superstardom was crippled by consecutive injuries that forced him to sit out most of the past couple of years. His athleticism has obviously dipped, and that resulted to his decreased production and impact on both ends of the court.

But if given spot-up minutes or more playing time when one of the Clippers’ big men gets injured, Cousins will definitely help on the offensive end of the floor. Shot selection is still a bit shaky, but with stars like Kawhi and George attracting most of the attention of the opposing teams’ defenders, Cousins will get wide open looks either inside the paint or out on the corner for an easy three-point shot.

However, it is on the defensive end of the floor that Cousins will be challenged again. The injuries that he suffered crippled his foot speed and lateral movement, forcing him to always have a difficult time on switching on to quicker perimeter players. Rebounding is one thing that the Clippers can count on from Cousins, but his defense still remains a liability.

In a separate column for The Athletic, Murray pointed out that Cousins can still help out the Clippers on the rebounding department, especially if you look at his best rebounding performances this season. But Murray also reiterated that the Clippers have to do their best to hide Cousins’ weaknesses on the defensive schemes.

Cousins has never been known for his defensive prowess, and the left leg injuries have evaporated most of the splash plays that would cancel out his physical or technical deficiencies. Of 63 players who have played at least 25 games and defended at least four shots within six feet this season, only nine allowed a higher field goal differential than Cousins this season (Zubac is seventh-best in same parameters, Ibaka 24th-best).   Cousins also averaged 3.0 personal fouls per game despite playing just over 20 minutes per game.

Cousins is still capable of strong rebounding games; in fact, he has one more double-double this season (six) than Ibaka. In a January road game at Dallas, Cousins grabbed 13 defensive rebounds as part of a 28-point,17-rebound double-double. Per 36 minutes, Cousins is averaging a career-high 11.5 defensive rebounds per game. Overall, Cousins averaged 7.6 rebounds per game despite the career-low minutes, a number that would lead the Clippers. Cousins would be joining a Clippers team that ranks second in the NBA in offensive rebound percentage allowed (24.1); when Cousins was on the floor for Houston this season, the Rockets allowed an offensive rebound percentage of 25.6, which would rank just outside of the top-ten in the league.

The Clippers are in their second year of rolling out the Leonard-George superstar combo. Ever since they signed the two star forwards in the summer of 2019, it was already expected that they should be chasing the championship each and every season.

But they came up short last year. The Clippers were able to make it to the playoffs in the Orlando bubble, and made it past the first round as they defeated Luka Doncic and the Kristaps Porzingis-less Dallas Mavericks in six games. They faced Nikola Jokic and the Denver Nuggets in the Western Conference Semifinals, and they were even up by 3-1 at one point in that series.

However, the Nuggets would fashion out a remarkable comeback that the Clippers definitely did not see coming. Denver would win the next three games in that series, sending the Clippers back home after the second round of the playoffs. It was an embarrassing defeat that forced the Clippers front office to revamp their coaching staff. Doc Rivers was fired last offseason, and they brought in head coach Ty Lue, who steered the LeBron James-led Cleveland Cavaliers to their first franchise championship in 2016.

This season, the Clippers are sporting an excellent record of 33 wins against 18 defeats, which is good for the 3rd spot in the Western Conference. They are trailing Rudy Gobert and the league-leading Utah Jazz, followed by Devin Booker and the second-ranked Phoenix Suns.

In an attempt to inject more championship experience to the team, the Clippers also made a trade for veteran point guard Rajon Rondo. The Clippers had to give up scoring combo guard Lou Williams to acquire the two-time champ’s services, a move that could prove to either be a wise decision or a plan that could deplete them of another scoring punch come playoff time.

As per John Hollinger of The Athletic, Rondo gives the Clippers a steady hand on their offensive schemes, especially when the stakes are higher and more important in the playoffs.

“OK, let me try to put myself in the Clippers’ shoes and argue for this deal. The glass half-full perspective for the Clips requires a belief in “Playoff Rondo,” the guy who showed in the bubble for the Lakers last season after being only mildly effective over the course of the regular season. Rondo does have a well-earned history of outperforming his regular-season numbers in the playoffs, but his regular-season numbers   this year were also bad enough that he’d have to outperform them by a pretty massive extent this time around.

Certainly L.A. has long felt it needs another offensive organizer to take some of the heavy lifting out of Kawhi Leonard’s and Paul George’s hands, and that’s not something that their other small guards (Patrick Beverley, Reggie Jackson, Luke Kennard) have in their toolset. L.A.’s locker-room leadership has also been …. questioned, let’s say … and Rondo can certainly help them there as well.  And, of course, in L.A.’s win-now mindset, what is two seconds and cash when you already surrendered five firsts to open this window in the first place.”

Rondo signed with the Atlanta Hawks last offseason so as to fulfill a leadership and mentorship role to the team’s young guns. However, it was clear that the Hawks needed an excellent scorer to lead their second unit, and they found that in the former Sixth Man of the Year, Lou Williams.

After their recent double digit win against the injury plagued Los Angeles Lakers, the Clippers will host more home games against Damian Lillard of the Portland Trail Blazers, followed by another tough contest against Chris Paul and the Suns. They will then battle it out against the Houston Rockets and the Detroit Pistons, before they embark on a three-game road trip to face the Indiana Pacers, the Philadelphia 76ers, and another match-up against the Pistons.