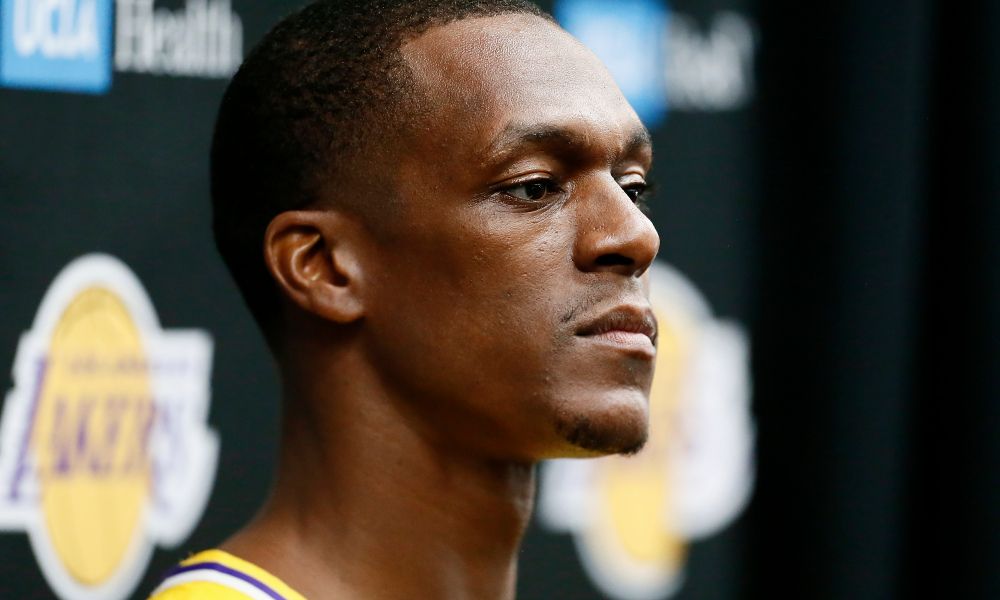 The Los Angeles Lakers will be bringing in another veteran to their experience-laden roster. As per Senior NBA Insider Adrian Wojnarowski of the ESPN, it is being reported that two-time NBA champion Rajon Rondo is planning to sign with the Lakers for next season. Rondo last played for the Lakers during the 2019-20 NBA season when he helped the team go on a successful title run, beat Jimmy Butler, Bam Adebayo, Tyler Herro and the Miami Heat, and win the coveted Larry O’Brien championship trophy.

Rondo, who turned 35 years of age last February, had a very unpredictable campaign last season. He signed with the Atlanta Hawks at the start of the 2020-21 season, a move that was seen by many people as an indicator of his willingness to mentor the up-and-coming star point guard Trae Young. But Rondo would see his name in the trading block, as the Hawks shipped him to the Los Angeles Clippers just before the trade deadline. Rondo would put up a stat line of 7.6 points, 3.1 rebounds, 5.8 assists and 1.0 steals for the Clippers, but he and the team would fail to beat Chris Paul, Devin Booker, Deandre Ayton and the Phoenix Suns in the 2021 Western Conference Finals.

Rondo would again be traded this offseason, this time to the Memphis Grizzlies. However, it was already anticipated even then that he and the Grizzlies will eventually reach a buyout agreement to let the veteran point guard have the freedom to sign with any team he wants to. At this point of his long and very productive career, Rondo should be able to play for a team who has the right tools and goals to seriously compete for a championship.

As per Bill Oram of The Athletic, Rondo will act more as a veteran presence for the team rather than someone who will log in a significant amount of minutes off the bench. Rondo will fight for minutes in the point guard position, especially with the Lakers reeling in Russell Westbrook and Kendrick Nunn in the offseason. Rondo can certainly contribute a lot with his high basketball IQ and excellent court awareness, but the Lakers signed both Westbrook and Nunn with the understanding that they will log in heavy minutes for the team.

Rondo had an uneven, though eventful, season away from the Lakers, first signing in Atlanta for $15 million before getting traded to the Clippers midseason. And while his numbers with the Clippers were similar to those in his last season with the Lakers, Rondo eventually found himself on the outside of Tyronn Lue’s playoff rotation. Perhaps    it would be wise to set expectations for Rondo’s return closer to what we saw from him   last season than his memorable high notes with the Lakers. After all, his first tour of duty    here was a mixed bag as well. A month before the pandemic-fueled shutdown, the Lakers were aggressively (and publicly) trying to lure Darren Collison out of retirement as an upgrade at backup point guard.

The Lakers know this history as well as anyone, and it’s doubtful they are blinded by the memory of Rondo’s postseason awakening. So how big of a role will Rondo even have in Frank Vogel’s rotation? He offers little as a 3-point threat but can still rack up assists and rebounds. He is essentially an older, lesser replica of Westbrook and presumably slots in behind Nunn for minutes, although James might still be the primary ballhandler whenever Westbrook is off the floor.

Westbrook, who played for the Washington Wizards last season, will of course be a key cog for the Lakers next season. He is coming off another year in which he put up a tremendous triple-double stat line of 22.2 points, 11.5 rebounds, 11.7 assists, and 1.4 steals per contest. Westbrook, who will turn 33 years of age this coming November, struggled in the first half of his stint last season, but he was able to bounce back nicely and led the Wizards to an improbable ticket to the 2021 NBA Playoffs.

For Nunn, he is coming off another excellent season as a starting point guard for the Miami Heat. After a rookie year in which he burst into the scene, Nunn remained largely consistent last season. He put up an outstanding stat line of 14.6 points, 3.2 rebounds, 2.6 assists, and 0.9 steals for the Heat, while also norming a tremendous set of shooting percentages, including a 48% overall clip from the field and a 38% clip from the three-point line.

Both Westbrook and Nunn will share a large load of the playing time at the point guard position, which means that Rondo will be the team’s third-string point guard. In the same column that he wrote for The Athletic, Oram also pointed out that Rondo is more of a cultural fit for the Lakers moving forward. However, it does not mean that the veteran playmaker cannot contribute as he still has what it takes to be valuable on both ends of the floor.

That delicious (and manageable) wrinkle aside, Rondo slides in as an easy cultural fit. How many times did we hear Vogel describe Rondo as the team’s leader in “swag?” Culture, maybe more than anything, has been the emphasis of this Lakers offseason. Pelinka has surrounded James with his peers; players similar to him in experience and stature — in as much as anyone is in James’ orbit when it comes to gravitas around the basketball world.

LeBron has been handed a roster with close friends, past championship-winning teammates and future Hall of Famers. It is not clear how all of it is going to fit together, or how much better Rondo even makes the Lakers, but the franchise has clearly chosen a lane this summer and stuck to it. And within that blueprint, Rondo is a perfect fit.

Along with Westbrook, Nunn, and Rondo, the Lakers shored up their roster with tons of veterans to help them go on a deeper postseason run. The team failed to defend the title last season, losing to the Suns in the first round of the playoffs. It was indeed a very disappointing campaign, and not to mention the fact that both LeBron James and Anthony Davis sustained major injuries that forced them to sit out many games.

In their bid to return to the top of the conference, the Lakers hauled in quality veterans and role players in scoring combo forward Carmelo Anthony, defensive-minded big man Dwight Howard, sweet-shooting wing Wayne Ellington, and two defensive-oriented forwards in Kent Bazemore and Trevor Ariza. The Lakers also managed to reel in the 23-year-old Malik Monk, who certainly has a lot of room left to improve.