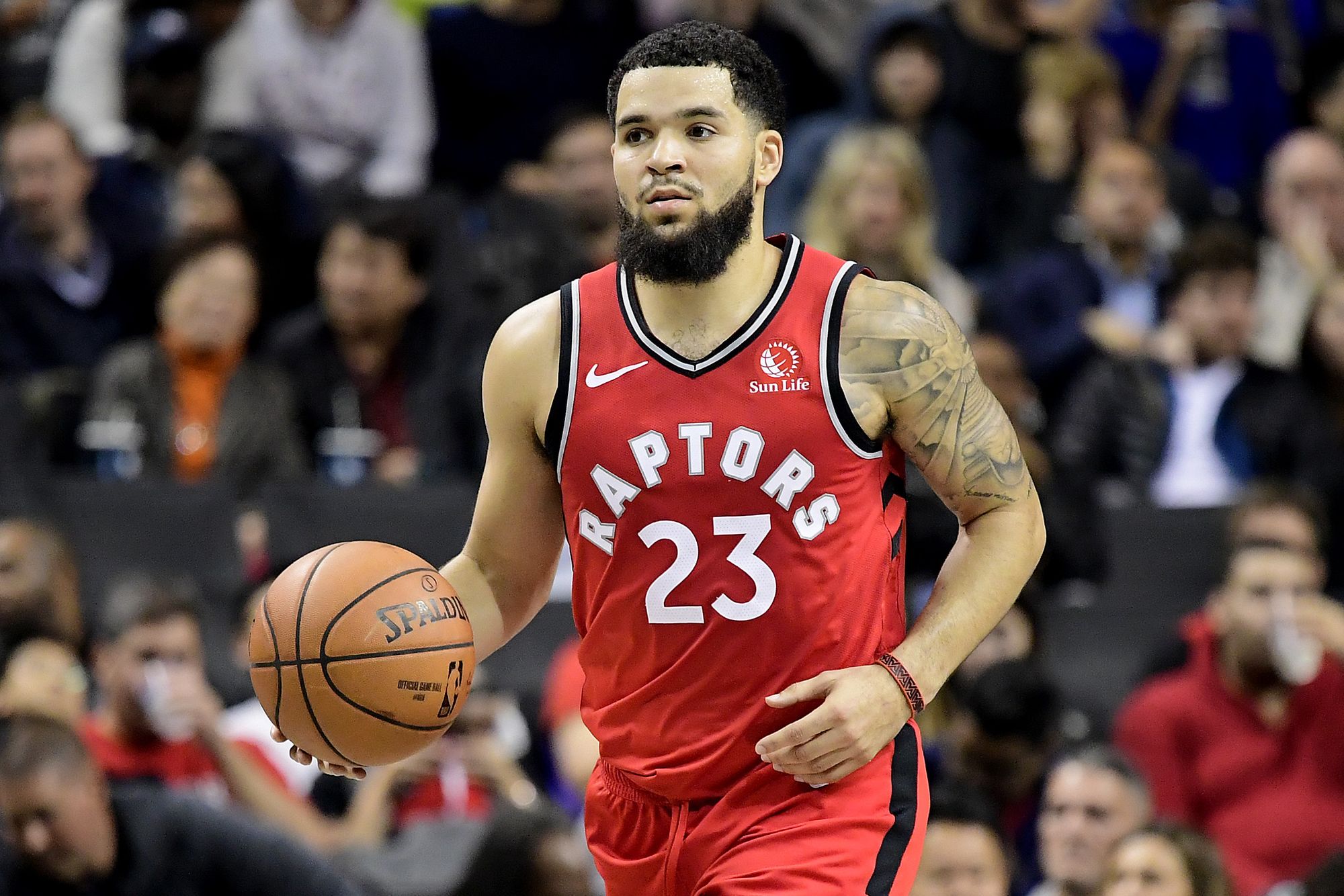 The Phoenix Suns had a promising campaign in the NBA restart after winning in all eight seeding games inside the bubble in Orlando. The Suns still fell short of their goal of at least earning a spot in the play-in round, but their perfect run in Orlando is a good launching pad for having better seasons ahead.

The Suns are reportedly eyeing several potential free agents in the offseason. Shams Charania of The Athletic revealed that Phoenix is among the teams who are interested in signing Toronto Raptors guard Fred VanVleet. Chase Hughes of NBC Washington also reported that the Suns are looking to acquire Washington Wizards forward Davis Bertans when he hits free agency in the offseason.

Both VanVleet and Bertans could bring the Suns to another level based on how the two upcoming free agents performed this season. VanVleet averaged 17.6 points on top of 6.6 assists and 3.8 rebounds for the Raptors during the regular season, while Bertans posted 15.4 points and 4.5 rebounds for the Wizards.

However, signing both Bertans and VanVleet would be easier said than done because several teams are also interested in both free agents. Their current teams are also determined to keep them. Aside from the stiff competition, money would be a factor in the Suns' pursuit of free agents.

According to Bobby Marks of ESPN, VanVleet will not come cheap in free agency, especially if he continues to play well in the playoffs. Marks said that the 26-year-old point guard will likely command $25 million to $30 million per year from interested teams. On the other hand, the 27-year-old Bertans will reportedly be worth around $15 million to $20 million per year in free agency.

The asking price of VanVleet and Bertans might force the Suns to look for other options. According to Brian Windhorst of ESPN, he will be shocked if the Suns will offer lucrative deals to free agents. The popular NBA insider does not think the Suns have the money to make a big splash in free agency.

"I would be stunned if that was the case because the word on the street about the Suns is they intend to reduce their spending and the sale of the G-League team certainly caught a lot of people by surprise," Windhorst said. "I know that Robert Sarver's company's stock is down, I don't know what that means. I mean, I'm not his accountant, I don't know what that situation is."

Windhorst said that the current situation would make it harder for a lot of teams, including the Suns. He pointed out that the first question that needs to be answered for Phoenix is how much team owner Robert Sarver is willing to spend in the offseason. But despite the financial uncertainty, Windhorst still believes that the Suns are heading into a good direction after hiring Monty Williams and their 8-0 campaign in the bubble.

"The Monty Williams hire was in my view a transitional moment for the franchise,"Windhorst said. "They have a franchise player who is going to be a perennial All- Star. They have actually gotten a little bit of traction in the ground, we'll see whether it lasts or not. Maybe that was the plan and they saw how they played in Orlando and maybe they pump the brakes on that."

Miami Heat Should Pursue Giannis Antetokounmpo in the Offseason

The Miami Heat are reportedly one of the teams who has a serious chance of acquiring Milwaukee Bucks superstar Giannis Antetokounmpo when he becomes a free agent. Antetokounmpo will become a free agent after the 2020-21 NBA season, but Greg Swartz of Bleacher Report believes that the Heat should make a move soon.

Swartz said that the Heat should try to trade for Antetokounmpo in the offseason, knowing that they have the assets to make a serious offer to the Bucks. By trading for Antetokounmpo, the Heat would have a chance to seriously contend for a title next season and keep the reigning NBA Most Valuable Player in the long run.

"While Miami could wait until 2021 to try luring Antetokounmpo away from the Milwaukee Bucks, that's another year of Jimmy Butler's prime that could be spent seriously competing for a title," Swartz said. "Between Butler, LeBron James, Chris Bosh and Dwyane Wade, the Heat have been pretty good at convincing free agents to either sign or re-sign over the past decade, so letting Antetokounmpo experience the team's culture for a full year would certainly give them a leg up on the competition."

Swartz said that the Heat should use the Los Angeles Lakers as a model. The Lakers gave up a lot young assets and future picks to acquire Anthony Davis last year despite the fact that they have a chance to sign him as a free agent this year. By making the gamble, the Lakers finished with the best record in the Western Conference this season, and are considered as serious contenders for the title this season.

However, the likelihood of Antetokounmpo-to-Miami scenario would all depend on how the Bucks will perform in the playoffs. Milwaukee finished with the best record in the league and are currently on their way to the second round of the playoffs. According to Ira Winderman of the Florida Sun-Sentinel, if the Bucks fail to make the NBA Finals this year, they might be forced to trade Antetokounmpo and the Heat would be more than willing to break the bank to land the superstar forward.

"The point I agree with most is that the Bucks have to make the NBA Finals, or it will get quite uneasy in Milwaukee," Winderman said. "As for your other points, there is this reality: If the Heat had to, there is not a player on the current roster they wouldn’t trade for Giannis Antetokounmpo, or possibly not even any two."

Indiana Pacers guard Victor Oladipo is also another player to watch for in the offseason. The Pacers are going into a different direction after parting ways with head coach Nate McMillan. There is a growing speculation that the Pacers might shop Oladipo, and the Heat are being mentioned as a potential destination because of their assets. According to Kenneth Wilson of FanSided's All U Can Heat, it would all depend on the Bucks and Antetokounmpo.

"Say Milwaukee wins a championship this season, and secures a long-term commitment from Antetokounmpo vocally, or in the form of an extension," Wilson said. "This would force Riley and the front office’s hand, return them to the drawing board, and consider other options. That, and that alone, is likely the only way this Heat team elects to prematurely make a play for Victor Oladipo, let alone another All-Star."

Oladipo averaged just 14.5 points and 3.9 rebounds per game for the Pacers this season. He played in just 19 games after recovering from a ruptured quad tendon, which he sustained in January last year. It remains to be seen whether or not the 28-year-old how soon Oladipo get back to his old form, but several teams are expected to express interest if the Pacers decide to trade him after the season.

The Minnesota Timberwolves will have a busy offseason after missing the playoffs again this season. The Timberwolves have already established a 1-2 combo after they successfully acquired D'Angelo Russell in a trade before the deadline to pair him with Karl-Anthony Towns. They have decisions to make with their free agents, particularly Malik Beasley and Juan Hernangomez.

Beasley and Hernangomez will become restricted free agents after the current season. The Timberwolves are on the driver seat at this point because all they need to do is match the offer sheets for the two free agents to keep them in Minnesota. Luke Adams of Hoopshype believes that there is a strong chance that Beasley and Hernangomez would still be in Minnesota next season, but it won't come cheap for them.

"Few teams have cap room available, and those that do may turn to other free agents rather than trying to pry a pair of promising young restricted free agents away from a rebuilding team," Adams said. "But the Wolves will still probably have to pony up if they want to secure Beasley and Hernangomez for the long term. It wouldn’t be a surprise if the duo ends up costing a combined $25MM+ per year."

Beasley appears to be a perfect fit alongside Russell and Towns based on how he performed since he was traded from the Denver Nuggets. In 14 games for the Timberwolves, the 23-year-old guard averaged 20.7 points and 5.1 rebounds per game. He shot 47.2 percent from the field and 42.6 percent from beyond the arc with 3.5 three-pointers a game. Hernangomez, on the other hand, posted 12.9 points and 7.3 rebounds per game.

Both players appear to have earned their spot in Minnesota. However, things might change depending on what the Timberwolves do in the 2020 NBA Draft. Minnesota won the lottery and will pick first in the draft. They have a chance to select promising guards in Lonzo Ball and Anthony Edwards, or go big with James Wiseman. The draft decision might have an effect on the value of either Beasley or Hernangomez.

Are you excited for the NBA finals?