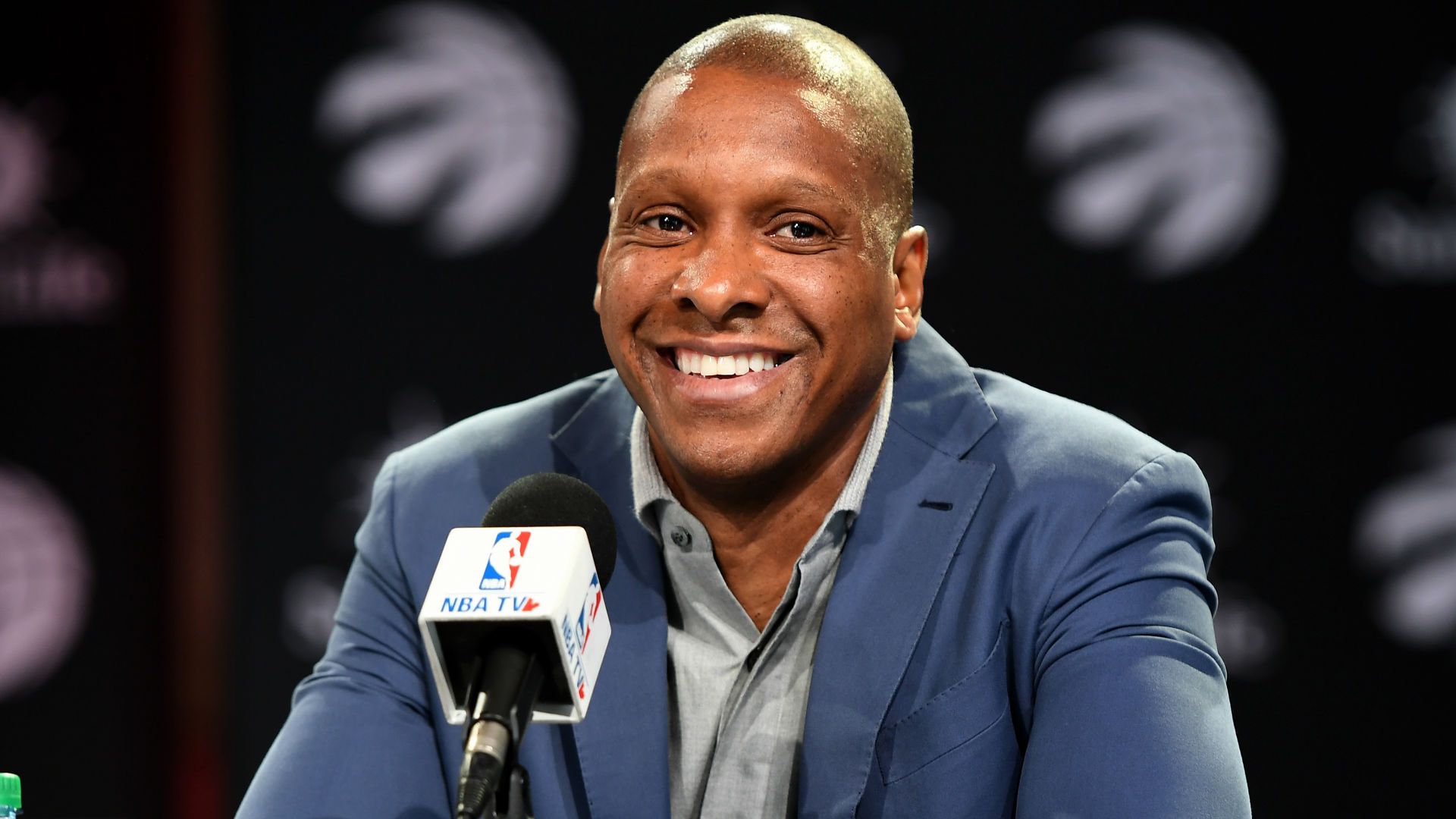 Toronto Raptors president of basketball operations Masai Ujiri is one of the most brilliant front office executives in the league, if not the best. His widely-documented gamble for superstar Kawhi Leonard worked eventual wonders as the Raptors captured their first ever NBA championship last season. Despite the fact that Kawhi walked in free agency to join his home town team Los Angeles Clippers, Ujiri has already installed a championship culture in Toronto.

However, will Ujiri stay in Toronto beyond this season? Newsday’s Steve Popper recently reported that his sources in and around the Raptors organization “fear” that their president may leave them and spill his magic beans on the struggling Knicks squad.

It can also be remembered that Knicks team owner James Dolan actually had his eyes locked on hiring Ujiri in 2017. He has just fired Phil Jackson from the team at that time, and Ujiri’s arrival could erase the bad memories that the Jackson administration left in the organization. Instead, Dolan promoted Steve Mills to the position and Ujiri took his talents to Toronto.

But the Knicks have not seen a lot of improvements since Mills assumed the position. They haven’t had a winning record since the 2012-13 season, and their lowly 17-65 record last season tied their lowest ever win-loss card in franchise history. They are now sporting a 4-17 record this year, an indicator that the Knicks are continuously digging a deeper hole for themselves.

That’s why this news that links Ujiri to the Knicks isn’t surprising anymore. Ujiri has turned everything he touched into gold. As general manager of the Denver Nuggets, he was awarded with the NBA Executive of the Year plum in 2013. The Raptors then pried him away from Denver during that same year, helping the squad to be a constant fixture in the playoffs every year since.

So it’s no secret that Ujiri’s services have been widely coveted around the league. Just last offseason, the Washington Wizards were serious in offering a staggering contract to Ujiri but nothing concrete materialized out of it. When asked why he is still choosing the city of Toronto for his place of work, Ujiri said that there’s something special and unique in the city, as per Matt Galloway of Metro Morning.

“My kids were born here. That's a big draw. For me it's been a great city. People have been unbelievable to me and and I appreciate that. I love that about the city, the organization, ownership.

There's something special, unique. It's a huge challenge for me to come here and to    win. I want to prove to everybody that you know what, we can win too. And to have that following behind us, for me is truly special.”

The Knicks ownership has to think very creatively if they want to lay out their plan of pursuit of Ujiri. It will take a big deal to lure him to New York, especially now that he and the Raptors organization are starting to build a dynasty. However, we all know that Ujiri isn’t one who backs down from challenges, and the situation in New York is surely a great puzzle to solve.

As the losses keep on piling up for the depleted Golden State Warriors, questions are also heating up regarding Steve Kerr’s credibility as a champion coach. Kerr has steered the dynasty to three championships in this decade, and just came short of a three-peat run when they lost the 2019 NBA Finals to the Toronto Raptors.

Yet, many people are wondering if Kerr is as good as the trophies lining up on his shelf. The Warriors are currently sporting the worst record in the league with a lowly 4-18 win-loss card. But that is primarily because their star players are plagued by injuries. Klay Thompson and Stephen Curry are out with major injuries, while Draymond Green and newly-acquired D’Angelo Russell have also missed consecutive games. Will the losses translate to a possible coaching change for the Warriors? Nope.

In a sit-down with The Athletic’s Tim Kawakami on “The TK Show” podcast, Warriors assistant coach Mike Brown emphasized that there’s “zero chance” that Kerr will lose his job after this disappointing season.

"He looked at me funny. I'm going to put it out there -- there's zero chance that Steve's getting fired (laughter). But for your owner and your general manager to find the time to jump on a plane, fly to Salt Lake City, go to dinner with the head coach to tell him we love you, you're doing a heckuva job ... stay and watch our game (then) fly back to the Bay the next night after our game -- to me that means a whole lot.”

Aside from the injuries to their key cogs, the Warriors also failed to retain their long-tenured supporting cast. They had no choice but to dump Andre Iguodala’s salary to the Memphis Grizzlies in order to offer D’Angelo with the max contract. Shaun Livingston is gone, as well as bruising center Andrew Bogut. The Warriors have three rookies playing major minutes, with second-round draft pick Eric Paschall ranking second in scoring behind Russell.

Willie Cauley-Stein, a young talented center recently acquired by the team in the offseason, says that Kerr is doing a tremendous job in being patient with their collective growth, as per Mark Medina of USA TODAY.

“He keeps a good energy about him. Even though it may seem from the outside looking in that it’s all broken up in here and it’s chaos, it’s not. We know it’s going to be a struggle at first. But it’s chemistry building time. He’s really patient with us.”

The struggles could also be a blessing in disguise for the Warriors. If they keep on piling up the L’s, they might just have the highest odds to nab the top pick in next year’s draft. Curry is still expected to return at some point of this season, although their playoff chances could already be dimmed when he comes back. They will have Klay coming back in 2020, and D’Angelo already has a firm grasp of the Dubs’ system next year.

Now is not the time to expect Kerr to deliver positive results in the team standings. But in terms of instilling a winning culture and motivating his players to be bigger than themselves, the three-time champion coach can do just that.

Fizdale’s stint in NY may be ending soon

Speculations around Knicks head coach David Fizdale’s grasp on his job have been going on for a while now. SNY’s Ian Begley recently reported that a member of the Knicks front office told SNY that he expects the organization to have a new head coach soon.

Here’s Begley’s statement on this development:

“We don't have a definitive answer, but one member of the organization said late last month that he expected management to fire Fizdale soon, per SNY sources. The person who expressed the thought isn't someone who would make the decision to fire Fizdale. But the idea that a member of the Knicks believes a coaching change is coming says a lot about the level of uncertainty in New York right now.”

The Knicks front office has been adamant that the roster they have built are underperforming this season. With a 4-17 record, the team’s investment on the veteran players they signed last summer isn’t paying off. They have been incurring losses in wide margins, and reports have it that the team is open to trading away those vets they acquired just this offseason.

For his part, Fizdale shouldn’t be the sole hit of the blame game. He doesn’t have the pieces to win, and the criticisms and the uncertainity of his job security could be taking a toll on him and the team. After sustaining their 6thstraight loss last Sunday, Fizdale even went on to say that his squad is becoming better as a team, per Ryan Honey of ESNY.

“I think we’re becoming a better basketball team. Like I said, we got our ass whooped in Toronto, and sometimes that’s going to happen to the best of them, doesn’t matter who you are. But if you look at our games against everyone else, we either won one or two there and then every single other game we were right there competing for a chance to win. The big thing we were fighting for was getting to be more consistent and giving ourselves a chance to be more competitive.”

Whether that is the nugget of truth or a statement of desperation from Fizdale, we don’t really know. But basketball is highly-regarded in the city of New York, and the fan base has been so deprived of team success this decade. Firing Fizdale is not an assurance that they can catapult this team to greater heights, but it “could” be a step towards finally doing the rebuilding process the right way.