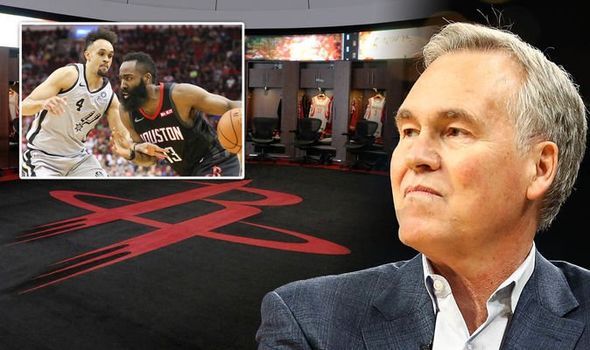 The Houston Rockets may have struck out in their mission to turn back the Golden State Warriors, but the team already has their sights set on a bright future. ESPN’s Adrian Wojnarowski reported that Mike D’Antoni and the Rockets front office have discussed a possible contract extension, with the former saying that he plans to continue coaching for three more years. D’Antoni’s contract with Houston will expire beyond next season.

Here’s D’Antoni’s statement on the contract discussions he had with the Rockets top brass.

"I've let [general manager] Daryl [Morey] and [team owner] Tilman [Fertitta] know that I'm energized to keep coaching --- and believe that I can continue to do this at a high level for at least another three years.

I want to be a part of a championship here."

Since joining the Rockets in 2016, D’Antoni has compiled a winning coaching record of 173 wins against 73 losses, and has led Houston past the first round of the playoffs in each of those three seasons, including a Conference Finals appearance last year. During his tenure, he has further empowered James Harden’s talent as a scorer and has primed the Rockets to be the most dangerous opponent for the Warriors.

While team owner Tilma Fertitta reiterated that he thinks D’Antoni is a “very good coach” and that “players like playing for him,” there were recent reports that the 68-year old coach didn’t see eye to eye with star point guard Chris Paul in terms of the team’s offensive schemes. Shams Charania of The Athletic had the inside scoop on that interesting speculation.

“There was something of a clash of styles brewing throughout the Rockets season,   with members of the team — most notably Paul — having spirited discussions with Mike D’Antoni about the offense and pushing for more movement. That type of fast- paced, ball-moving offense is what D’Antoni thrived with in Phoenix, and to the two-  time Coach of the Year’s credit, he has adapted it in Houston to allow Harden to succeed in his game.”

The Rockets have inclined more on Harden’s isolation plays this season, and there are many pundits who criticize that system. Harden has become one of the most efficient and deadly scorers in the league today, but players like Paul would want a share of that meal, too.

Following the departure of John Beilein, who has taken his coaching talents to the professional league, the Michigan Wolverines have announced their hiring of Miami Heat assistant coach and former NBA player Juwan Howard as their next basketball head coach. Warde Manuel, the athletic director at Michigan, issued his statement regarding the exciting return of Howard to the university.

“We have found someone with high integrity, great character and a coach who has unbelievable knowledge of the game of basketball. Juwan has proven himself to be a tremendous leader, a wonderful communicator and a developer of talent. We couldn’t have asked for a better role model for the young men in our program. We are excited to welcome back a member of the family to Ann Arbor.”

Howard, a two-time champion as a player for the Heat during the Big 3 era, has been Erik Spoelstra’s top assistant coach in Miami. He is highly-valued as an excellent player development coach, and has been instrumental with the improvement of big men Hassan Whiteside and Bam Adebayo.

Howard is also widely-known as a member of Michigan’s “Fab Five,” along with Chris Webber and Jalen Rose. Here’s Juwan’s statement on his return to his college roots.

“As a ‘Michigan Man’ I know the place our program has in college basketball and I embrace the chance to build onto that history and lead us to championships both in the Big Ten and national level. We will continue to develop young men on the court,in the classroom and in the community that our fan base will continue to be proud of.”

While this is certainly a mark for a new era in Michigan, the hiring comes as a surprise as Howard was highly-courted by NBA teams for a head coaching role next season. Among the teams who expressed their interest in Howard were the Cleveland Cavaliers, the Memphis Grizzlies and the Los Angeles Lakers.

Fresh from hiring former Michigan head coach John Beilein, the Cleveland Cavaliers have announced that they are acquiring the services of former Memphis Grizzlies coach J.B. Bickerstaff to serve as the team’s associate head coach. Cavaliers general manager Koby Altman expressed his excitement on Bickerstaff’s arrival, per the team’s official page in NBA.com.

"We couldn’t be happier or feel more fortunate that J.B. is joining us as associate head coach. Having someone with J.B.’s level of experience join Coach Beilein, in partnership and leadership, to guide our team is something we are confident is an excellent addition for us. J.B. has spent his entire life in and around the game and    his knowledge of the league and basketball will bring a full spectrum of value to the team. His approach to coaching and everything on the court and off is exactly the  kind of perspective, commitment and integrity we want for the culture and growth we will drive here.”

Bickerstaff has served as assistant coach in the league since joining the Charlotte Hornets in 2004. He had heading coaching stints with the Grizzlies and the Houston Rockets, compiling an 85-131 record in the process. The 40-year old mentor is known for his excellent knack for defensive schemes, and that will be vital for the development of Cleveland’s young players.

Beilein, a first-time coach in the NBA, also has something to say about his upcoming partnership with Bickerstaff.

“When I spoke with J.B., I quickly realized that we share many of the same core values, principles and views about coaching basketball and team culture. I also think J.B. will bring ideas and leadership that will complement my approach well and help the team in very impactful ways. I can’t wait to merge all his years of NBA experience and expertise into the full vision for the team.”

The Cavaliers have a bevy of young guns in their roster like heady point guard Collin Sexton, talented swingman Cedi Osman, and spitfire combo guard Jordan Clarkson. The question moving forward for their line-up is if they will retain star forward Kevin Love for the long run or continue their rebuilding process by trading him for draft picks and inject more youth to the team.