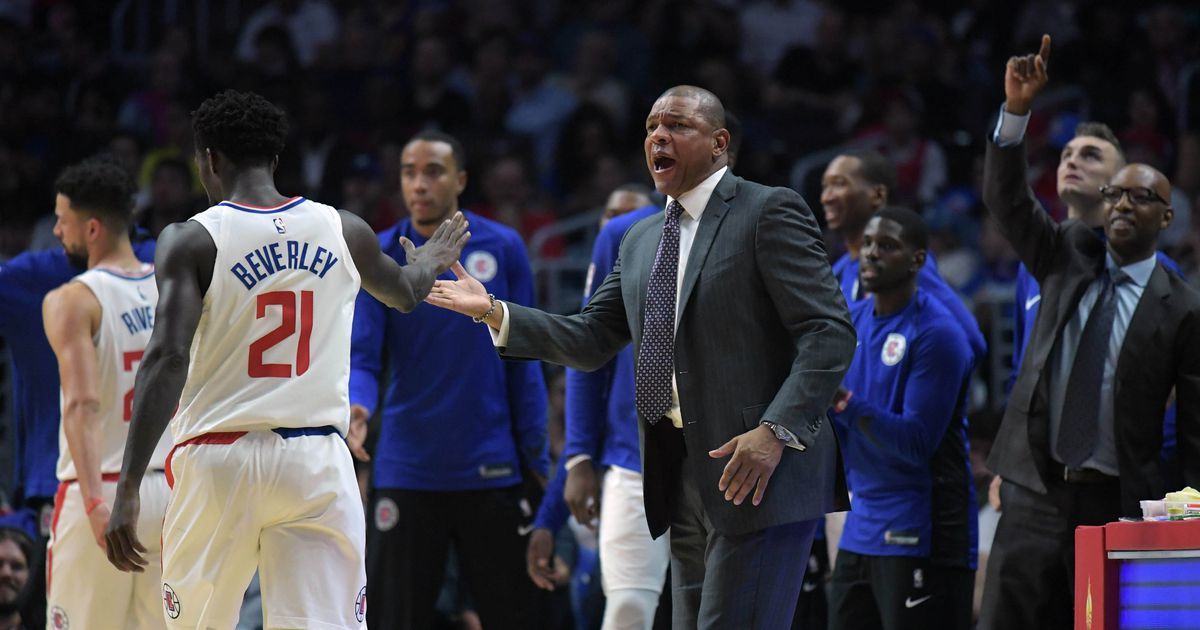 After leading the overachieving Los Angeles Clippers to a 48-34 regular season record, and two impressive playoff wins against the Golden State Warriors, champion head coach Doc Rivers has reportedly signed a contract extension with the Clips. Andrew Grief of the Los Angeles Times was the first to report about this exciting development for a Clippers’ future that just got brighter.

In giving heaps of praises for his relentless Clippers squad, Rivers was quoted as saying:

“I’ve never been more proud of a group of guys in the 20 years that I’ve coached. They were just really fun. As I’ve said before, I’ve never had a group where you wanted to, in the morning, you raced to the car, you raced to practice just because  you love being around them. So for me, it was just a pleasure to coach them.”

Despite transitioning from the Lob City era and losing two key starters to trade deals midway through the season, the Clippers overcame all odds and still earned a postseason berth. The Rivers-led feisty squad summed up their incredible year with the Game 2 comeback win against the Warriors, a game where they trailed by as high as 31 points.

Before this contract extension, the former 2008 champion coach was long rumoured to be linked to the Los Angeles Lakers’ head coaching vacancy. But Rivers has always reiterated his desire to stay within the Clippers organization, and this extension concludes just that.

For the Clippers, signing Rivers to a longer-term deal is an obvious choice. Through his leadership, the less-heralded LA squad have ranked 2ndin three-point percentage, and 7th in overall field goal clip. With a mix of young promising players, tough-minded veterans, and a salary cap space intended to sign two max free agents this offseason, the Clippers have one of the brightest futures among the 30 NBA teams.

It appears that the basketball world is nearing a Tyronn Lue-LeBron James reunion. Brodrick Turner of the Los Angeles Times reported that during an interview session for the franchise’s head coaching vacancy, Lue left a strong impression within the Lakers organization.

“During Lue’s interview session at the Lakers’ practice facility in El Segundo on  Wednesday, a lasting impression was left on both parties involved in the discussions,  according to the people. Lue, who played for the Lakers and won two NBA titles with  them in 2000 and 2001, was sincere about wanting the job, the people said. He showed them offensive sets and defensive scheme during his conversations with the group.”

Shams Charania of The Athletic also mentions that Lue “struck a very emotional cord in his interview with Lakers leadership.” That’s not really surprising, considering that Ty is a former Laker and LeBron’s head coach during the Cleveland Cavaliers’ one and only successful championship run.

After a four-year stint as head coach of the Cavaliers, the 41-year old tactician has amassed a winning 128-83 coaching record. There are also rumors around the league that Lue might tap former Chicago Bulls and Minnesota Timberwolves head coach Tom Thibodeau to work as his top assistant coach, per Adrian Wojnarowski of ESPN.

“Another thing when you’re trying to get a job being able to put together a top assistant coaching staff is important. I’m told that Ty Lue inquired with Tom Thibodeau about being his top assistant.”

Thibodeau, more known for his defensive brilliance, should be a prize catch for the Lakers if they could convince him to return to the assistant coaching job, a role he worked on from 1989 with the Wolves until 2010 with the Boston Celtics.

After the surprising dismissal of first-year head coach Igor Kokoskov, the cellar-dwelling Phoenix Suns have focused their sights on acquiring the services of Philadelphia 76ers assistant coach Monty Williams. Wojnarowski reported about the Suns’ recent interview with Williams, though it appears that the Suns are also planning to interview two more candidates for the head coaching vacancy.

Williams, who is still serving under Sixers head coach Brett Brown as Philly battle the Toronto Raptors for the right to enter the Eastern Conference Finals, has been one of the most sought-after head coach candidates for the next season. Despite a losing coaching record of 173-221 during his five years with the New Orleans Pelicans, it’s widely-believed that Williams has a very positive image with the players and coaches he previously and currently worked with.

However, Duane Rankin of the Arizona Republic reported that the Suns still didn’t make an offer to Williams when they met with the assistant coach Friday in Toronto. Here’s the main reason why:

“The Phoenix Suns didn’t have to make an offer Friday in Toronto.

That would’ve given the Los Angeles Lakers the power to make a better one to  convince Monty Williams to fill their head-coaching vacancy.

But by not putting their cards on the table, the Suns can wait on the Lakers to put  theirs out there first and then counter that offer with a better one.”

While the Lakers are the Suns’ clear rivals in acquiring Williams, people around the league also believe that the Lakers are more enamored in getting Lue, their former player and also LeBron’s former coach. With that said, the Suns still have more interviews to conduct, particularly with Tibbetts, a front-runner for the head coaching job with the Atlanta Hawks last year, and Vanterpool, a respectable figure in the league who also has front office experience with the Oklahoma City Thunder.

The Cleveland Cavaliers are reportedly scheduling an interview with head coach J.B. Bickerstaff, who was fired by the Memphis Grizzlies after their 2018-19 season ended last month. Joe Vardon of The Athletic had the inside scoop on this interesting development.

“The Cavs had no reason to put Bickerstaff there. He had a job. They were stunned  when they learned on April 11, just as general manager Koby Altman and Drew were putting the finishing touches on their agreement to part ways, that Memphis fired Bickerstaff as its coach after just one full season (and part of a season before, as the Grizzlies’ interim coach).

Now, sources told The Athletic, the Cavs and Bickerstaff are working to set up an  interview for next week.”

Bickerstaff, 40, has a head coaching record of 85-131 with a one-year stint with the 2015-16 Houston Rockets, and a two-year experience with the Grizzlies.

The Lakers coaching search went for another dramatic turn as Dave McMenamin of the ESPN reported that former Milwaukee Bucks head coach Jason Kidd was interviewed by the franchise’s top brass. Here are the details regarding this development:

“Kidd's interview was with general manager Rob Pelinka and team executive Kurt  Rambis and was conducted at the team's practice facility in El Segundo, California. The interview with the Hall of Fame point guard lasted for several hours, sources told ESPN.”

While there has long been rumors that Kidd may be linked to the Lakers coaching job, the legendary playmaker wasn’t really considered a serious candidate for the league’s most storied franchise. After retiring as a player in 2013, Kidd was immediately hired by the Brooklyn Nets to coach the team. He led the veteran Nets team to a winning record that season, but Kidd’s teams never found success in the postseason. He was fired by the Nets after just a single season, but the Bucks got hold of him, where he had a four-year stint as the squad’s top coach.

Kidd, a champion point guard with the Dallas Mavericks in 2011, has a coaching record of 183-190 with the Nets and the Bucks.