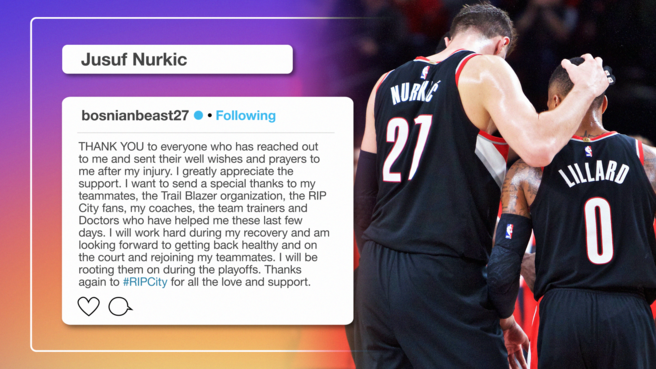 As the game was on its way to the two-minute mark of the second overtime period, Portland Trail Blazers center Jusuf Nurkic attempted a putback shot after a teammate’s miss, something that he has been working hard on doing each and every game. But he landed very awkwardly, and his left leg severely bent upon landing. It was a horrific sight as players from both teams immediately turned their backs, also feeling the severity of the injury that Nurkic just went through.

It was a very unfortunate setback for the 24-year old Bosnian big man who is posting career-high numbers of 15.4 points, 10.3 rebounds, 3.2 assists and 1.4 blocks per game this season. Before he went down hurting during the Blazers’ 148-144 victory over the Brooklyn Nets, Nurkic was tallying 32 points, 16 rebounds and 4 blocks across the board. Portland All-Star point guard Damian Lillard summarized the immediate emotions when he first saw his teammate’s serious leg injury, per USA TODAY’s Matt Eppers.

"It made me sick to my stomach. As I was walking over there, I saw everyone else   turn around real quick and walk away, and then I looked and I saw his leg."

"It's tough, man, to see one of your brothers going down like that — I just don't know  what to say. But tonight I'm just going to go home and pray for him. Because this is  way bigger than basketball. We clinched the playoffs, but we cannot even celebrate  it. He was a big part of our family. Not our team, our family."

The Blazers are expected by many to have a deeper postseason run than their previous disappointing playoff performances. But their success in the April games definitely took a hit with the Nurkic injury. The team will now turn to Kanter, Meyers Leonard and Zach Collins to step up to the frontcourt plate.

The injury woes just keep on piling for the Rip City as star shooting guard CJ McCollum will be out for at least a week more, per Casey Holdahl of the Blazers’ official website. Holdahl says that head coach Terry Stotts has told him that the 27-year old scoring guard will not play during the team’s four-game road trip. In that span, the Blazers will only face one playoff-seeded team, which is the Detroit Pistons.

Still, McCollum is heading the right direction in his recovery from a knee injury and has a high chance of making it to the first round of the playoffs, per the CBS Sports.

“McCollum is making strides in his recovery, but he'll be sidelined at least until  April while dealing with a knee injury. Jake Layman should continue to draws starts at shooting guard while McCollum is on the mend.”

McCollum, who is averaging 21.3 points, 4.0 rebounds and 2.9 assists per game, will be much-needed by the team if they want to perform better in the playoffs this year. The Blazers are currently on a four-game winning streak, and have won seven of their last eight games. However, the unfortunate injury to Nurkic will be a big obstacle for the team, something that they couldn’t be able to hurdle come playoff time.

Primed for a breakthrough this postseason, the Milwaukee Bucks have been hit with an injury plague as recently acquired veteran big man Pau Gasol has suffered a left ankle injury that will sideline him for at least a month. ESPN’s Malika Andrews has the report on this development.

“Bucks center Pau Gasol is expected to miss approximately one month with a left ankle injury, league sources tell ESPN. He joins Nikola Mirotic and Malcolm Brogdon as among those likely out for the regular season.”

It’s safe to say that the 38-year old Spaniard will definitely miss the first round of the playoffs. Now sporting a 55-19 record, the Bucks are poised to top the Eastern Conference and gain homecourt advantage for the whole postseason. However, recent injuries to key players such as combo guard Malcolm Brogdon and stretch forward Nikola Mirotic have hampered the team’s momentum going into the most important stage of the year.

Derrick Rose, one of the leading candidates for the Sixth Man of the Year award this season, has successful undergone a surgery on his injured elbow, per the Minnesota Timberwolves’ announcement on their official team website. Rose has not played in the Wolves’ last six games.

A career resurgence has pushed Rose to the limelight this year. The former MVP is posting impressive numbers of 18.0 points, 4.3 assists and 2.7 rebounds this year, including a stellar 50-point outing in a win against the Utah Jazz. With a 33-40 win-loss card, the Timberwolves are virtually out of playoff contention in the Western Conference.

Rose, who is earning $2.4 million this year, is set to become an unrestricted free agent in the summer. With the high level that he is playing this season, the 30-year old point guard could garner great interest from contending teams and could command a mid-level salary in the offseason.

Arguably the most surprisingly good players in the team this season, Miami Heat small forward Justise Winslow has been sidelined by a thigh injury that has kept him out for the last five games. David Wilson of the Miami Herald says that Winslow sustained the injury after a Milwaukee Bucks player’s knee hit him in the right thigh in the first half of their match against the league’s top team. Here’s Winslow’s statement concerning the incident.

“I just didn’t have the top gear that I usually like to play with on both ends of the floor, so it affected me.”

Winslow is arguably having the best season of his career as he’s putting up an all-around stat line of 12.7 points, 5.4 rebounds and 4.3 assists per game, including a much-improved 38% clip from beyond the arc. His development from a one-dimensional defensive player to becoming the Heat’s go-to-playmaker has been valuable for the team’s success.

Miami Herald’s Anthony Chiang also noted that Winslow missed the team practice on Monday as he was hit with food poisoning. The Heat will face the 9th-seeded Orlando Magic at home on Tuesday as the two Florida teams battle each other for the 8th and last playoff spot in the Eastern Conference.

“Phoenix Suns forward Kelly Oubre Jr. today underwent a procedure on a sprained left thumb after suffering the injury in the Suns’ game at New Orleans on March 16. His expected recovery time is approximately four to six weeks.”

With the Suns’ season already down the drain, Phoenix fans will wait until next year to see Oubre play again. In the 40 games since the team has traded for him, Oubre has been averaging 16.9 points and 4.9 rebounds per game. In that game against the Pelicans, the 6-foot-7 forward scored a season-high 32 points, on top of 6 rebounds and 2 steals.

The flamboyant budding star will be a restricted free agent this summer. While it’s highly-expected that some rebuilding teams will take a look at him and offer a contract sheet, the Suns are still the favorites to sign him to an extension. The Suns are set to land a top-five pick in this year’s draft, and anyone among Duke’s Zion Williamson and R.J. Barrett, and Murray State’s Ja Morant would form a young but deadly core with Oubre, shooting guard Devin Booker and center Deandre Ayton.