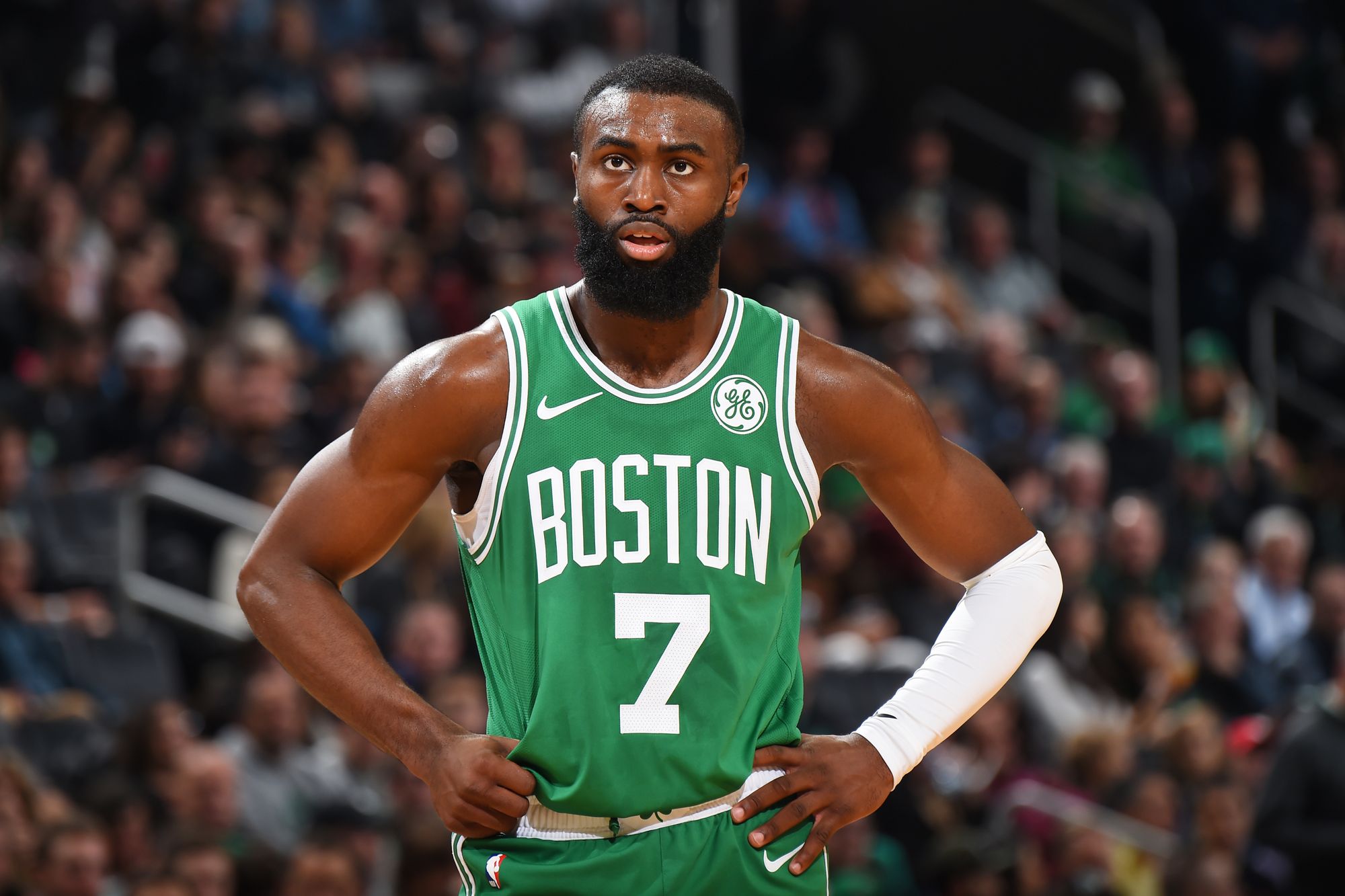 It is becoming apparent that the Boston Celtics may not be able to replicate the Eastern Conference Finals run they produced in the Orlando bubble during the 2019-20 NBA season. It is now being reported that All-Star small forward Jaylen Brown will miss the remainder of the current season due to a torn ligament injury on his left wrist.

This is indeed a devastating setback for Brown and the Celtics, especially with all the struggles and hardships that they have experienced all throughout the season. Brown sustained the unfortunate wrist injury during the Celtics’ four-point loss to the Oklahoma City Thunder, a game in which he finished with a stellar all-around performance of 39 points, 11 rebounds and 4 steals.

Brown, who is on his 5th year in the league, notched his first selection to the All-Star Game this season. Brown is currently putting up a tremendous all-around stat line of 24.7 points, 6.0 rebounds, 3.4 assists, 1.2 steals and 0.6 blocks per contest. On top of all these excellent numbers, Brown is also producing an efficient set of shooting percentages of 48% overall clip from the field, including 39% clip from the three-point line and a 76% clip from the free throw line. All of these shooting percentages are his career-highs.

How will this setback affect the Celtics’ hopes of replicating a deep run in the playoffs this season? Jay King of The Athletic says that Brown’s absence in the playoffs would definitely hurt the Celtics’ chances of toppling the other elite contenders in the Eastern Conference. Joel Embiid and the Philadelphia 76ers are healthy. Reigning back-to-back Most Valuable Player Giannis Antetokounmpo and the Milwaukee Bucks are healthy. James Harden has assured everyone that he will be ready to join Kevin Durant and Kyrie Irving to bolster the Brooklyn Nets’ chances in the playoffs. Jimmy Butler and the Miami Heat are awaiting the return of recently-acquired star shooting guard Victor Oladipo.

King says that a Brown-less Celtics squad will not be enough to overcome those elite contenders in the East.

Even in a cursed season, the Celtics had been hoping to reach the postseason with a healthy roster and see what they could do from there. Before a string of frustrating recent losses, all with a short-handed roster, Brad Stevens stressed how confident he felt about his playoff rotation if the Celtics could just have everyone available. After the midseason pickup of Evan Fournier, Stevens knew he could have loaded up his five best perimeter players with big minutes, split the center playing time between Robert Williams and Tristan Thompson, and given  just spare chances to the rest of the roster. With Brown, the Celtics would have at least been able to dream about regaining their edge in time to make another deep playoff run.

Without him, the Celtics appear to have little chance of advancing out of the first round, if they make it there at all. According to Basketball-Reference’s playoff probabilities report, the Celtics entered Monday with about a 71.7-percent chance of finishing in either seventh or eighth place  in the Eastern Conference. If they do land in one of those two spots, the Celtics will need to win one of two play-in games just to advance to the actual first round. If they do reach that far, their path will not be easy.  By far their likeliest first-round opponents at this stage are the 76ers, Bucks and Nets – all of whom will be significant favorites against Boston without Brown.

This wrist injury, which would require a surgical procedure, came as a surprise to Celtics fans and the whole NBA community. People thought that Brown was missing games due to the ankle injury he suffered when he collided with teammate Jayson Tatum during a game against Damian Lillard and the Portland Trail Blazers. It was a double knockout of a setback as the Celtics also lost that game by ten points.

Tatum may have become a new superstar in the league this season, but Brown is not far behind. Brown has become the second most important player in this Celtics roster, and he has grown into a well-rounded scorer. His 24.7 points per game this season is the highest output of his career so far, and he is doing it not by sheer volume, but through a high level of efficiency in each offensive possession.

But aside from his work on the offensive end of the floor, Brown’s tremendous efforts as a defensive anchor will be sorely missed by his teammates. Even before his breakout year last season, Brown has been more known as someone who can take up every kind of assignment on defense. With the high level of improvement that has been showing on offense, Brown is still the same great operator on the defensive end of the floor.

Brown, who was selected as the 3rd overall pick in the 2016 NBA Draft, came up with a silent rookie year with the Celtics as he only produced 6.6 points, 2.8 rebounds, 0.8 assists, 0.4 steals and 0.2 blocks per contest. But Brown quickly blossomed to a high-impact player in his second year with the Celtics, and he developed into a star last season. In the same column that King wrote for The Athletic, he detailed out how Brown is rounding out to be an elite scorer in the league, especially with the improvement that he is showing with his long-range marksmanship.

For Brown, this marks a frustrating end to another promising season of development. Forced to step into a bigger role because of Kemba Walker’s injury issues and Gordon Hayward’s departure, Brown regularly showed off new parts of his game. The 24-year-old set career highs in points per game (24.7), assists per game (3.4), field goal percentage (48.4 percent) and 3-point percentage (39.7 percent). Though he scorched the nets early in the season from the midrange, the Celtics coaching staff later encouraged him to pass up some of those shots in favor of longer attempts. Over the final two months he played, Brown became a long-distance threat like never before, making 40.6 percent on more than eight 3-point attempts per game. That type of production over a full     season would make him one of the NBA’s more productive shooters. That’s where Brown, already an accomplished slasher, appears to be headed. For all of the disappointment around the Celtics this season, his  growth stands out as a major win for the franchise.

The Celtics will miss Brown sorely on both ends of the court. In his absence, Fournier will likely slide into the starting lineup. Rookie Aaron Nesmith, who has been impressive lately, will likely land additional playing time.

As for the Celtics team as a whole, even getting to the playoffs could be a difficult task in the next couple of weeks. With a disappointing record of 35 wins against 33 defeats, the Celtics are only sitting on the 7th seed in the East, and they need to get through the play-in tournament to book a coveted ticket to the NBA playoffs.

But that would prove to be very difficult considering that a couple of their key players are sitting out with injuries. Aside from Brown’s season-ending wrist injury, young center Robert Williams also suffered a foot injury in their last game against the Miami Heat, and is currently listed as day-to-day in the team’s injury report. It is indeed unfortunate as Williams is currently carving a consistent role in head coach Brad Stevens’ rotation, while putting up a decent stat line of 8.0 points, 6.9 rebounds, 1.8 assists, 0.8 steals and 1.8 blocks per game.

With Brown sitting out the remainder of the season, the Celtics have to rely heavily on Tatum. But Tatum alone is not enough. The team is definitely hoping that star point guard Kemba Walker can go back to his own deadly ways and be more effective on both ends of the floor. Their trade deadline acquisition of French scoring swingman Evan Fournier is paying dividends, and young guns like Payton Pritchard and Aaron Nesmith have to step up to the plate.

As per Kevin O’Connor of The Ringer, the Celtics’ hope of toppling the other contenders in the East, even before Brown’s season-ending injury, is to toughen up. Toughness and grit are two factors that are missing from this version of the Celtics squad, as what O’Connor points out in his column.

If you told me then that four years later the same team would make two more East finals appearances, and Brown and Jayson Tatum would both be averaging around 26 points, I’d have responded by guessing they’d also be NBA Finals favorites. Boy, would I have been wrong.

The Celtics are 15-15 and lack any of the toughness that defined some of  their East finals rosters. Only Brown, Tatum, Smart, Semi Ojeleye, and Daniel Theis remain from the 2017-18 squad that went to a Game 7 against LeBron James and the Cavaliers. The Celtics have undergone more  roster turnover in four years than a restaurant staff in a college town. These aren’t the same Celtics anymore. They’ve gone from having Thomas and Al Horford to Kyrie Irving and Gordon Hayward to Kemba Walker, who’s currently playing like a shell of his former self; their top veteran is worse now, and the supporting cast has gotten younger. Danny Ainge makes weekly local appearances with Toucher & Rich on 98.5 The Sports Hub and tends to offer fair assessments of the team. Last week, he was asked if he thinks the team is good enough to win it all. “I  do not,” Ainge said.

After their recent loss to Jimmy Butler, Bam Adebayo and the Miami Heat, the Celtics will again face the same team in their next game. If the Heat wins that match-up again, they will be a fixture to maintain at least the sixth seed in the East standings.

After that contest with the Heat, Tatum and the Celtics will then embark on a three-game road trip to finish their regular season schedule. That road trip will feature games against Collin Sexton and the Cleveland Cavaliers, Karl-Anthony Towns and the Minnesota Timberwolves, and Julius Randle and the uprising New York Knicks.