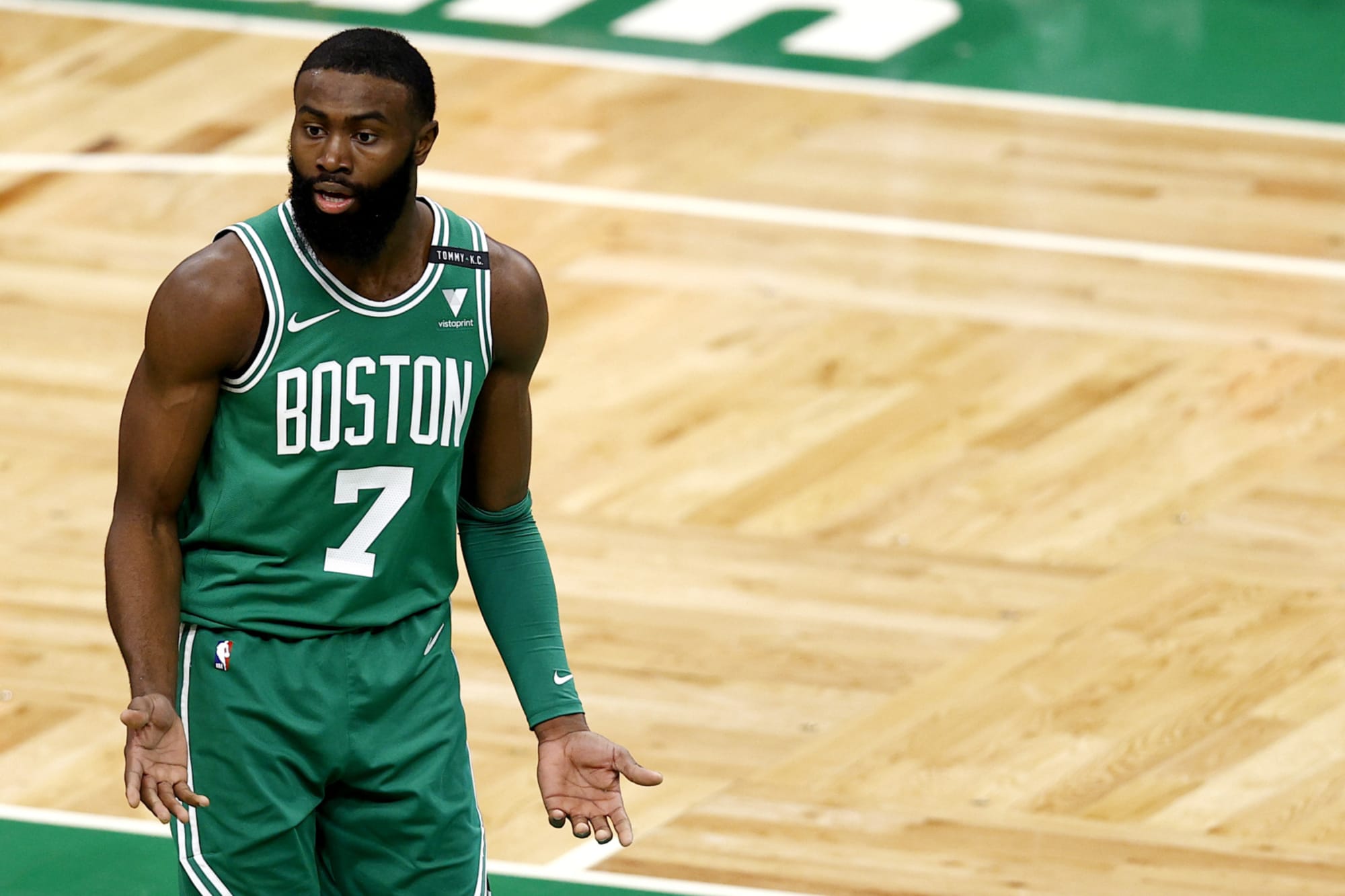 The Boston Celtics won their most recent assignment against Trae Young and the Atlanta Hawks, but it was not all good news coming out of the Celtics’ camp last Tuesday. Jaylen Brown, one of their best players this season, has sustained an ankle injury in the first quarter of that match, and he did not return to the game. Brown logged just almost three minutes of play when he appeared to twist his foot as he was driving down the lane. It was a scary-looking injury but the Celtics All-Star was able to walk off the court on his own, although he was not able to return to the game. It was indeed a very unfortunate setback for Brown and the Celtics, especially right now that they are making a great run towards the more important games in the playoffs.

Despite not having Brown’s elite services the rest of the night, the Celtics were still able to hack out a 107-98 victory over the Hawks. Star forward Jayson Tatum led the charge for the Celtics as he put up a tremendous all-around stat line of 33 points, 8 rebounds, and 7 assists, while combo guard Derrick White and power forward Grant Williams contributed 18 points apiece off the bench. Starting big man Robert Williams pulled off a near double-double night of 9 points, 13 boards, 2 assists, 1 steal, and 2 blocks while defensive-minded veteran guard Marcus Smart stuffed his stat sheet with 16 points, 6 rebounds, 4 assists, 1 steal, and 1 block to help the Celtics carve out their 37th win of the season.

As for the Hawks, it was another disappointing loss for them as they dropped to a record of 29 wins against 32 defeats in the Eastern Conference. Trae Young led the charge for the Hawks as he came up with 31 points, 2 rebounds, and 6 assists, while Serbian shooting guard Bogdan Bogdanovic came off the bench to pour in 25 markers, on top of four rebounds, three assists, and one steal. Veteran combo forward Danilo Gallinari contributed 12 points and 8 rebounds, but there were no other Hawks player who put up double digits in the scoring column. The Hawks are now seated in the 10thspot in the Eastern Conference standings, and they have lost two of their last three games, including a painful four-point defeat at the hands of the Chicago Bulls.

As for Brown, it remains to be seen if how many games will he miss due to the ankle injury that he just sustained, but it is without a doubt that the Celtics will miss his elite services on both ends of the floor. As per a column written by Dan Devine for The Ringer back in 2020, he pointed out that Brown is certainly one of the most versatile stars in the league today, and that the Celtics depend on him for a lot of things.

There aren’t many players in the league who defend all over the positional spectrum while also serving as a legit second scoring option. According to Narsu and Patton’s data, Brown spent about 9 percent of his floor time checking centers, 16 percent on point guards, and the rest shuffling among the wing positions. Only 10 other players in the whole league spent as much time guarding 1 through 5; only three did so while posting as high a usage rate as Brown and averaging 20 points per game. One is Russell Westbrook, whose center time may be unduly skewed by Houston’s plunge into extreme small ball. If you toss him out on that Moreyball technicality—sorry, Russ—you’re left with two dudes who have generated roughly the same two-way profile as Brown this season: Kawhi Leonard and Jimmy Butler. OK, OK, you got me: Jimmy averaged 19.9 points per game this season. (I rounded up in hopes that I might one day get a discount on a cup of Big Face Coffee.) Still: That’s pretty good company for any wing to be in, let alone one playing such a huge role at just a young age.

It’s easy to forget, but Brown’s not even nine months older than Bam. There’s still so much room for him to grow—as an off-the-dribble creator and a passer, chiefly. By virtue of his postseason experience in his first four seasons, his versatility on both ends of the court, and his ineffable character, Brown has come to occupy a central role in the Celtics’ hierarchy. If Boston can come back and get past Miami, Brown would be in line for a major challenge in the NBA Finals. Against the Lakers, his likely assignment would be LeBron James, whom he’s been guarding since his rookie year and on whom he was the Celtics’ primary defender during the regular season (and maybe some spot duty against Anthony Davis in what figures to be an all-hands-on-deck scenario); against the Nuggets, he’d possibly adopt a supersized version of the role he played against Bam should Stevens seek a change-of-pace small-ball antidote for Nikola Jokic. Whatever task Stevens sets out for him, it’s clear that the 23-year-old Brown will be counted on to not only accomplish it, but to serve as a tone-setting leader in doing so.

Brown, who is turning 26 years of age this month of October, was the 3rd overall pick during the 2016 NBA Draft. He was one of the best prospects in a draft class that include Ben Simmons of the Brooklyn Nets, Brandon Ingram of the New Orleans Pelicans, Buddy Hield and Malcolm Brogdon of the Indiana Pacers, Jamal Murray and Bryn Forbes of the Denver Nuggets, Caris LeVert of the Cleveland Cavaliers, Marquese Chriss and Dorian Finney-Smith of the Dallas Mavericks, Jakob Poetl and Dejounte Murray of the San Antonio Spurs, Domantas Sabonis and Damian Jones of the Sacramento Kings, Taurean Prince and Malik Beasley of the Minnesota Timberwolves, Juan Hernangomez and Danuel House Jr. of the Utah Jazz, Timothe Luwawu-Cabarrot of the Atlanta Hawks, Furkan Korkmaz of the Philadelphia 76ers, Pascal Siakam and Fred VanVleet of the Toronto Raptors, Ivica Zubac of the Los Angeles Clippers, Alex Caruso and Derrick Jones Jr. of the Chicago Bulls, Damion Lee and Gary Payton II of the Golden State Warriors, and David Nwaba of the Houston Rockets. Among the other notable players in that draft class include Dragan Bender, Kris Dunn, Thon Maker, Denzel Valentine, DeAndre’ Bembry, Patrick McCaw, Jake Layman, Georges Niang, Abdel Nader, Ryan Arcidiacono, Yogi Ferrell, and Shaquille Harrison.

Brown, who played high school ball for Wheeler at Marietta, Georgia and college ball for the University of California, Berkeley, is already an NBA All-Star. He has played his entire career with the Celtics, and has been a key cog in their deep runs in the playoffs. After a career-best performance during the 2020-21 NBA season, Brown is putting up another outstanding all-around stat line of 23.2 points, 6.2 rebounds, 3.3 assists, and 1.0 steals per contest, while also producing a set of shooting percentages that include a 46% overall clip from the field, a 34% clip from the three-point line, and a 76% clip from the free throw line. Along with his excellent knack for putting the ball through the hoop, Brown is also a dependable operator on the defensive end of the floor. It is this kind of two-way versatility that Brown possesses at this point of his career, and there is still room for more improvement as he is just 25 years of age.

Moreover, his partnership with Tatum is undoubtedly one of the best in the league today. As per a column written by Rob Mahoney for The Ringer, the future of the Celtics is built around the unique skill sets of both Brown and Tatum.

Picture, in your mind’s eye, what a Steph Curry team looks like. Immediately you’ll see the spaced floor and the natural fluidity, the pitch-and-catch game that drafts off a shooter so dangerous he uproots the bedrock principles of NBA defense. Or, instead, picture a Giannis Antetokounmpo team—with the kind of size and mashing physicality that might make you instinctively reach for an ice pack. Picture a Chris Paul team and you’ll see patience; picture a Kevin Durant team and you’ll see his ease of creation; picture a LeBron James team and you’ll see total matchup control. But picture a Jayson Tatum team and you might see a dozen different styles flicker past. Picture a Jaylen Brown team and you could see even more. This is because the recent history of the Celtics is a protracted identity crisis. Some versions of the team have played fast, and some slow; some have crashed the glass and some haven’t; some tried tighter roles while others let loose; some have set the tone with their offense, while others—like the current iteration—have survived only with defense.

Even within the first half of this season, wildly different versions of the Celtics have shown up from night to night, fumbling in the dark for the team they’re supposed to be. This is what we’re really talking about when we mull the futures of Tatum and Brown as teammates in Boston, and consider a world in which they no longer would be. Building around a pair of All-Star wings is never really a doomed enterprise in the NBA. These two are much too skilled for that, and far too versatile. Yet without real and consistent organization, all that versatility can feel aimless. Brown, in particular, so often plays like a star searching for the limits of his role. Tatum’s long-term progress has stalled somewhere between knowing he could create a shot for himself at pretty much any time and wondering whether he should. When one is—or both are—pressing, they threaten to either win the game outright or throw Boston’s entire operation off balance. The result isn’t just a middling season, but an undercurrent of voiced frustrations and passive aggressions. Trade speculation was an inevitable byproduct.

As for the Celtics team as a whole, they are currently sporting an excellent record of 37 wins against 27 defeats, which is good for the 6thspot in the Eastern Conference standings. They have won three of their last four games, which includes morale-boosting victories over the Hawks, Detroit Pistons, and the Brooklyn Nets. Their next set of assignments will be against the Nets, Pistons, the Memphis Grizzlies, Charlotte Hornets, Dallas Mavericks, Golden State Warriors, Sacramento Kings, Denver Nuggets, and the Oklahoma City Thunder.